It is always a challenge for Kathy and me to live out our faith in front of our children. While others might be fooled by a veneer of spirituality, our children see us at our least pious moments. This year, in an attempt to model the virtues of ministry and service, we volunteered to work as leaders in our churchâ€™s AWANA program. As it happened, Joshua and Daniel were already serving in AWANA, and Rachel had done so in years past. David and Sarah are participants in the program. Weâ€™ve been looking for opportunities to minister together as a family â€“ this seemed tailor-made to lend our support and endorse it by our presence.

Approved Workmen Are Not Ashamed … but maybe some of ‘em aren’t fully Approved, yet?

Weâ€™re about half-way through the year, and it has not been easy. While many kids enter into the program whole-heartedly, some are interested only in the games, and endure â€˜Verse Timeâ€™ and â€˜Council Timeâ€™ with ill-concealed boredom. And yet, there are moments of tenderness and glory when the gospel message connects with the hearts of the children, some of whose lives are being transformed by the power of the Holy Spirit. 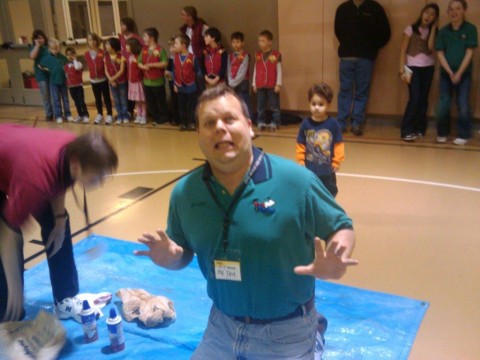 Being an AWANA leader can be pretty challenging.

During â€˜Verse Timeâ€™ the kids are supposed to recite verses that theyâ€™ve memorized during the week, progressing through numbered sections in their workbooks. It is hard for the kids (and, if they’re anything like us, their parents) to remember to work on their books during the week, and so â€˜Verse Timeâ€™ is sometimes less productive than we would like. In an attempt to motivate the kids, our fearless AWANA commander offered the kids a deal:

“If you finish a book (8 â€˜Discoveriesâ€™, or chapters of 7 sections each),” he told them, “you will get an opportunity to throw a whipped-cream pie in the face of one of the leaders.” 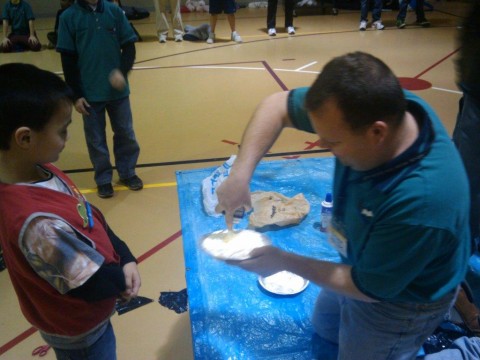 Thank goodness there were only two cans of whipped cream available.

This deal was received with glee on the part of the kids, but I wasnâ€™t worried. While several of the boys in my group are making good progress in their workbooks, Iâ€™ve been subtly suggesting to the boys in my group that Tom, my co-leader, would make a better target for a pie. “After all,” I reminded them, “he sometimes wears a beard, which would be much harder to clean after a good pie-ing.”

Little did I know, that one of my â€˜friendsâ€™ at our church was hatching a plot against me, using his own children as instruments of evil.

Many people think that this man (weâ€™ll call him Jekyll, after Robert Louis Stevenson’s story) is godly, upright, and worthy of honor. After all, he serves as an elder in our church, leads a small group Bible study, and also holds the position of Treasurer. His children are sweet and well-behaved (or so I always thought), and his wife is a kind and gentle saint. He often teaches classes and serves communion, and is one of the few men in our church who wears a tie. 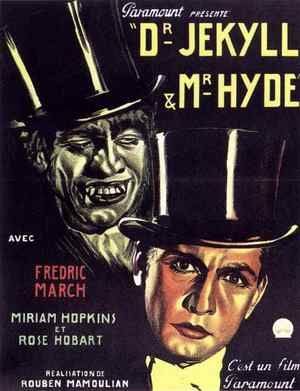 Not my actual ‘friend’.

Of course, Iâ€™ve had the advantage of seeing him operate behind closed doors. A person with my unique insight could suggest that he is a tight-fisted skinflint; a man who snatches cookies out of the mouths of widows and orphans, a man who must be opposed on nearly every major policy decision of the church. In many ways, he might be better likened to the brutal Mr. Hyde. 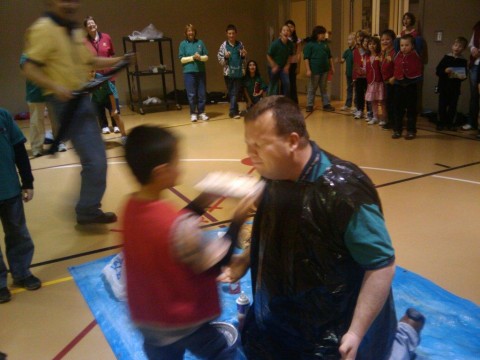 I barely had time to close my eyes …

I felt a tingling of impending doom, when little Zachary was asked, â€œWho do you choose as your target, for a pie in the face?â€

I was stunned. Zachary isnâ€™t even in my group (I am a leader for older boys). I had assumed that he would pick one of his own leaders, or, perhaps the AWANA commander himself. What could possibly motivate him to seek me out for this vicious attack?

The truth was soon revealed: â€œMy Dad will pay him $5 to get you with a pie,â€ his sister (Angie) confided, hopping up and down in glee.

I remembered a recent debate among the church elders, in which Dr. Jekyll was narrowly defeated. He wanted to install parking meters in the churchâ€™s lot, and to drive around in a little cart between services, ticketing those who overstayed their time.

â€œThose people are wasting valuable parking spaces, chatting it up in the lobby! Weâ€™ve got to move â€˜em in and move â€˜em out!â€ he shouted, pounding his fist on the table, veins popping out on his flushed face.

Personally, I rather think he wanted to see the sad faces of the children as he towed their parents’ cars away. As I often do, I opposed him in this vile scheme, and now I discovered I was not immune from the consequences of that action. 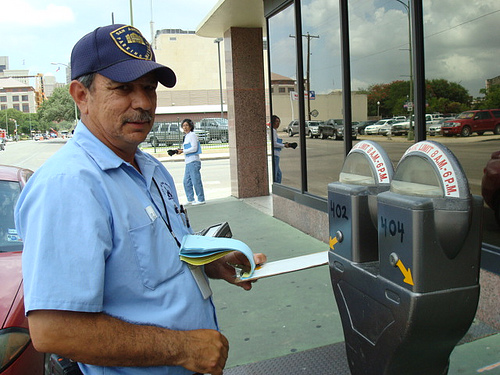 Dr. Jekyll had put a lot of work into the Powerpoint presentation for the elder board … obviously not a man to thwart lightly.

Little Zachary soon revealed the influence of his fatherâ€™s character, as I reluctantly filled the pie-pan with whipped cream.

My pleas for mercy were ruthlessly ignored as he pressed the pie firmly into my face. Just as his father would twist a knife in my back, Zachary rotated the pie with his wrist to ensure that the cream would go up my nose and into my eyes. After what seemed like hours, he finally released the pie pan so I could gasp for breath. 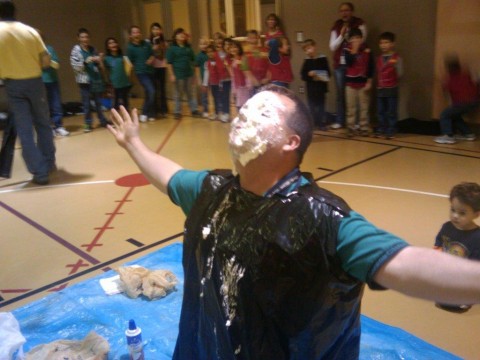 Maybe I should have taken out my contact lenses … ?

In many ways, this simply underscores the need for an AWANA program in our church. We must always be vigilant against the influence of the world. Venality and corruption among the children of leaders is of particular concern. 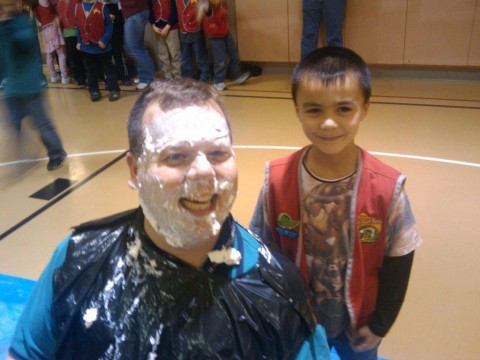 Little Zachary (aka “The Tim Slayer”) doesn’t even look sorry …

I fired off an e-mail to my so-called ‘friend’, the next day.

â€œSo, when is the next time youâ€™ll be teaching Sunday School for second, third, seventh, eighth or tenth-graders?â€ I asked him, innocently.

Coincidentally, those are the ages of my children, who have already expressed their willingness to be bribed, some of them offering two-for-one specials.

Revenge, as they say, is a dessert best served cold.