I wrote this blog a while ago, but never got around to posting it. Now that the entire month of September has gone by, and I haven’t posted a single entry, I’m scrambling to find anything to post.

With my usual carpool buddy gone to Alaska for a friendâ€™s wedding, I find myself commuting up to Bellevue alone, which is not much fun. Yesterday I planned to take the train, but just before exiting the highway to the train station, I heard there had been an accident between a freight train and a pedestrian, and that all northbound trains were cancelled â€˜until further noticeâ€™. So I joined the hordesfolk on I-5; a good reminder as to why I ordinarily commute via carpool.

Even though I left the office right at 3 pm, it took me an hour and fifty minutes to get home, much of it in stop-and-go traffic, which wears me out. So today I am riding the train, smugly typing away while the peasants change lanes and cut one another off.

As a bonus, I found that there is a free wireless network covering the train station â€“ I was able to fire off a quick e-mail to Kathy before the train moved out of range. I amused myself for a while by scanning the wireless networks we pass â€¦ but in most cases we move beyond the range of the network before I can log in and take advantage. Many of the wireless networks are secure, but there are still a few that are free. I saw one encrypted network in which the broadcast name (SSID) was â€˜NotFreeAnymore[Expletive]â€™ â€“ I guess that guy resented others piggybacking on his bandwidth.

I wonder if wireless networks will continue to proliferate, and if most towns will soon, in effect, be one big â€˜hotspotâ€™? There is no real technological reason why a utility company couldnâ€™t set up enough wireless relays to offer a network pretty much anywhere you go in an urban or suburban setting. Of course, making that profitable might be tricky. If I were a city government, I would probably set up a network like that and ban all cable and DSL companies from doing business in my town â€“ force everyone who wanted something better than dialup to use the city network (and pay the city an equivalent monthly fee). Over time, it could be quite a cash cow, I think, without really gouging the populace. Alternatively, a town might pay for the initial setup costs out of real estate taxes and maintain the network through volunteers, making it free. Iâ€™ll bet most towns have enough people savvy enough to run the networks to pull it off.

Of course, you could expect the cable and phone companies to squeal. As voice-over-IP (VOIP) continues to be adopted, I would not be surprised to see more and more people move away from traditional phone lines and start using cell phones or VOIP phones exclusively, even for local calling. This wonâ€™t happen overnight, but I know a lot of us are tired of paying $40-$70 a month to local phone service monopolies.

Some cell phone companies are offering high-speed data services via their networks, sometimes called â€˜3Gâ€™ or third generation services. Even though I work for a telecom company, Iâ€™m embarrassed to admit that I havenâ€™t figured out how to connect my laptop to high speed data through my phone. I guess I need some sort of air card or connector cable for my phone â€¦ I need to look into that.

Of course, there is only so far that all this mobile connectivity will take us. Most people want connectivity to the internet at home and at work, but it is hard to make a strong case that most of us â€˜needâ€™ it while we travel around, and many donâ€™t travel very much. Even riding the train, where I have a table and can type away on my laptop, I probably wouldnâ€™t use an internet connection very often. I heard talk some time ago of setting up a wireless network here on the train (as they have on the Washington State ferries), but Iâ€™m not sure if it would be worth their while.

When I got to work after I wrote the above paragraphs, I decided to investigate my employerâ€™s offerings for this kind of technical problem. It turns out that they do, indeed, have a way for me to do this. I purchased an â€˜Air Cardâ€™ that fits into the PCM/CIA slot of my laptop through the employee phone program (I get a 40% discount). The air card uses the SIM from my phone (a tiny little chip that tells the cell network who I am and that I am one of their customers) and connects to the cell network. From there it connects to the internet using General Packet Radio Service (GPRS) at speeds a little faster than dialup (50 kbps or so). In certain areas, they also have a faster service (EDGE) which flirts with faster speeds (a technical max of around 384kbps, I think). I arranged for an unlimited data package to be added to my phone account so that I wouldnâ€™t run into unexpected charges (the basic data package only gives you 10MB a month â€“ not enough for an internet-browsing, e-mailing techno-fool like me).

In a few days I received the Air Card and happily installed the software that came with it. I popped the little SIM card out of my phone and put it into the Air Card, plugged it into my laptop, and away I went! As I write, weâ€™re zipping down the tracks near Tukwila, but I have internet connectivity so that I can quickly google the speed of the service in the paragraph above. 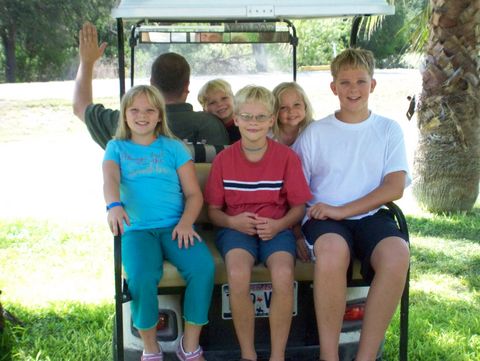 One place I really enjoyed the air card was in Fort Clark, Texas.

Iâ€™m pretty smug. I donâ€™t know why I feel such a strong sense of personal accomplishment in using this technology (after all, GPRS and even EDGE have been out for some years now), but I canâ€™t help feeling as though I have invented sliced bread. Call me a techno-geek, I really like being able to send and receive e-mail from the train.

One afternoon recently, my carpool buddy got sick, and we came home an hour earlier than we usually do. I worked from my desk upstairs for an hour or so to repay the time, and then the kids wanted to go to the pool. Kathy seemed like she needed a break, so I offered to take them all to the pool, craftily bringing my laptop with me.

When we got to the pool, I grabbed a table in the shade and fired up my laptop, connecting effortlessly to the cell network that covers our neighborhood. I was able to work for more than an hour while the kids splashed happily in the pool. I was very smug, because I would have squandered that time reading a novel, but instead the time was quite productive. I think that this Air Card will prove to be a very wise investment, since it helps me to make better use of time when I am waiting for something and allows me remote connectivity in a variety of situations. Iâ€™m excited about using the card when we go to Texas this year â€¦ dialup connectivity is always tricky there, and Kathy does like to get her e-mail. It looks as though my companyâ€™s wireless coverage is pretty good in that area â€¦ hopefully Iâ€™ll be able to get some decent bandwidth there.

Today I overslept again, which is why Iâ€™m riding the train. Staying up too late seems to cause my brain to ignore my alarm â€¦ both of them were turned off when I finally awoke, and I know I turned them on last night. When Iâ€™m tired I become very resourceful, telling myself (and anyone else, apparently) all kinds of lies about what time it is and what time I really need to get up.

When I was a freshman in college, I had a class at 9:30 am on Tuesdays and Thursdays. My brother, who was a senior that year, took much glee in coming over to my dorm room and waking me up on those days. He had a PE class (I think it was golf) on my side of the campus, and he would usually jog over to my dorm. If I didnâ€™t respond to his hammering on my door, he would come in and bounce on his knees up and down on my bed, oozing sweat and generally making a nuisance of himself. I think it was the highlight of his day.

As was my usual practice, I stayed up late playing wargames one night, and was therefore rather out of it when my brother arrived. As it turned out, he failed to wake me up, and I missed my class. In typical failure to accept responsibility, I later called him up and chided him for his lack of responsibility:

Me: Hey, Mark, why didnâ€™t you wake me up this morning?

Me: What? You never came!

Mark: Yes, I did. You told me that one of your buddies needed you to drive him up to Richmond so he could give blood, and that you were skipping your 9:30 class to do that. You said you had a little more time and that I should let you sleep.

Me: And you believed me?

Mark: You seemed a little glib â€¦ does this mean you didnâ€™t need the car? You stinking weasel!

I had no recollection of my brotherâ€™s visit, or of the elaborate story I told him, which was entirely untrue (except that there is, in fact, a city by the name of Richmond). Apparently my semi-conscious brain woke up just enough to fabricate a believable tale â€“ enough to make this hot, sweaty and overly-cheerful person go away. I slept until almost noon that day â€¦ and I learned not to trust my brain when it is sleep-deprived.

I know this blog really didn’t have a point, but, hey, I made it in under the wire and managed to have at least something posted for September. My work here is done.

Daffodils and DVDs
Family Photo
A Visit with Timothy