There is no question that my favorite season of the year is Christmas time. Summer is delightful (especially here in the Pacific Northwest, where summer is never too hot) and I do enjoy Thanksgiving as much as the next guy (unless the next guy is Joshua, who REALLY loves Thanksgiving). I always enjoy my birthday, although the last few have been a bit lonely, with Kathy out of town.

But there is something really unique about the anticipation, the wonder; the nearly-universal joy that is Christmas. Sure, people get stressed about the season – buying too much and trying to meet everyone else’s expectations, but even so, there is something quite special about focusing on the Advent of the Savior of the World, and seeking to show love as much as possible to others. 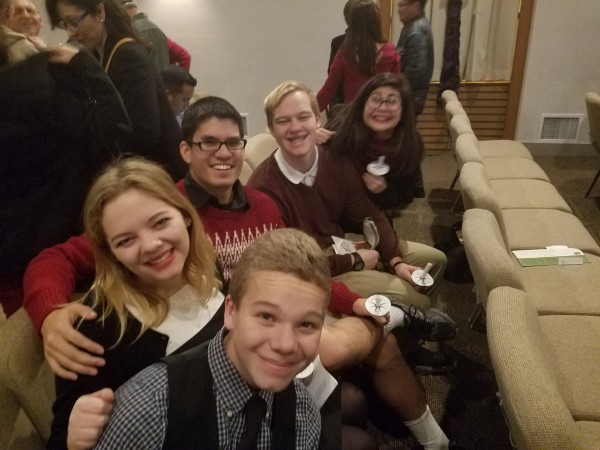 Round up the usual Christmas suspects!

When I was a little boy, my Dad used to tell a story about a Christmas gathering he had attended (or maybe only imagined) in which a bratty child feverishly unwrapped a generous pile of presents on Christmas morning. When there was nothing left under the tree, the boy looked around angrily. “Is that ALL?” he whined. (My Dad can imitate a really impressive whine.)

This boy was held up as the pinnacle of the height of ingratitude – we all knew that we didn’t want to be identified with that child in any way. I can only hope he never existed, and was only a product of my Dad’s inventive mind.

Truth be told, there is a part of all of us that is just the tiniest bit disappointed when Christmas is ‘over’. When the last presents have been opened, and the visiting relatives have gone home, and the leftovers have become passe’ – when all is said and done, there is a sense of a bit of a let-down.

January is a cold and rainy month in Western Washington – usually too cold and damp for comfort and too warm for snow. The contrast between the warmth and color and joy of the Christmas season is rather stark, and I find myself unwilling to venture out into the relative ‘cold’ of the New Year.

So I don’t. I keep listening to Christmas Carols and I refuse to even consider taking down the Christmas tree. I leave the lights on the outside of my house burning each night, taking a defiant (and I dare say, heroic) stand against the turning of the seasons. “What does January have to offer, that I should take down the lights?” I ask anyone who questions my unflagging Christmas Spirit.

But my wife likes variety, and is a bit more forward-looking than I am. Even though our tree is fake, she begins to pine (pun intended) for change, and to reclaim the space lost when the Christmas decorations descend upon the house. Even my children (who ought to be on my side) begin to raise an eyebrow when they hear me relentlessly playing Christmas music on my computer.

This year, my wife was very crafty. She slowly (and rather sneakily) put away the decorations, bit by bit, until only the tree and the outside lights remained as a bastion against the tide of progress. Waiting until I was out of town for a Men’s Retreat, she whisked away the tree and the outside lights. When I came home, it was a ‘fait accompli’, with only the ‘extra’ tree in our bedroom still remaining. 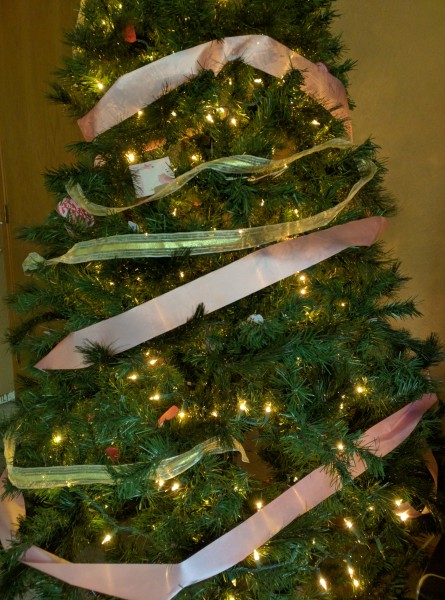 My Valentine Tree keeps the season alive, even at the end of February.

Even that tree was subjected to a transformation, of sorts.

“It’s a Valentine’s Tree,” she told me, smugly.

According to the interweb, a ‘Golden Anniversary’ is when a couple celebrates their 50th wedding anniversary. My parents celebrated theirs five years ago, to much fanfare and family enjoyment.

Parenthetically, it really was a ‘Golden’ day. It happened to fall on Columbus Day, which (at the time) was celebrated as a holiday in the city where I lived. School was cancelled, and we spent the day touring the many attractions of the city. Although I knew, intellectually, that it was the holiday that gave everyone an excuse to celebrate, I couldn’t help feel that, if they really knew, the people of New York City were celebrating my birthday.

So, if you were so fortunate as to be born on the same day as the number of your month, then I imagine you could have a ‘Platinum Birthday’. For example: someone who turned 11 on the 11th of November.

And I suppose if the years and the time of your birth lined up such that you turned 9 on September 9, 2009, then you’d really have it made. Maybe you’d call that your ‘Californium 252 Birthday’, since that is the rarest and most valuable metal?

Fascinating as this study of precious metals may be, today we studied (and enjoyed) a very precious person, more valuable to God and to us than his weight in Californium 252. Today, my youngest son David turned 16.

It was a pretty good day. Due to some late-night work last night, I was able to work from home (usually I am in the office on this particular weekday) and so I was able to take David to take his ‘Road Test’ at the 911 driving school. Passing with flying colors, David and I celebrated with a tasty lunch at Subway. We ordered his driver’s license online, opened presents, and celebrated David as much as we could, considering he has a cold and a difficult Algebra II exam that he had to take and submit today. 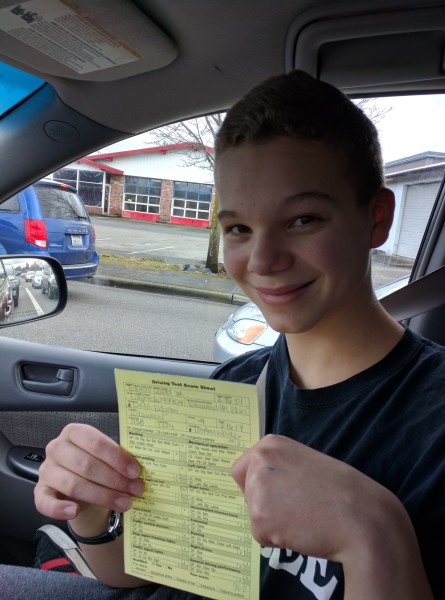 Scoring an impressive 96%, David may have outdone us all in driving prowess.

This evening, Sarah and David drove to Albertson’s to buy Kathy some grocery items. To some parents, such an errand may not seem to have any significance, but Kathy and I have been through this a few times already — we know what happens when a teenager gets their driver’s license. Suddenly, the world is their oyster, and they find many opportunities to enjoy the freedom of the road. It can be a very poignant time for a parent who is already reeling from the abrupt departure of three older children.

But who knows? David is, in many ways, a very unique young man — he makes his own way and doesn’t follow the usual rules of being a teenager. Maybe he’ll drive when he needs to, but will still find ways to hang out with Kathy and me and Sarah. Time will tell.

When I was in elementary school, I suffered greatly from Middle Child Attention Deficit Disorder (MCADD). It was never diagnosed, but in hindsight, it seems clear that I had all the trademark symptoms:

A textbook case, as you can see. Of course, it was mostly my brother’s fault. Had he not been such a stalwart firstborn, oozing with virtue and a strong commitment to duty, perhaps my parents would not have been so entirely unprepared for a second-born who shared few (if any) of his brother’s character strengths.

When she could stand it no longer, my poor Mom would resort to sly sarcasm and insults.

Mom: “Have you considered a career in the Navy, Tim?”

This was odd, because our family (steeped in Army traditions) didn’t know much about the Navy except that they had strange-sounding ranks and presumably swabbed the decks a lot.

I knew enough about my Mom’s slyness to be on guard.

Mom: “I was just thinking that some of the ranks might really appeal to you … “

Me: “Oh, really? Which ones? Admiral? Commodore? Commander?”

Mom: “No, I was thinking more in terms of ‘Petty Officer’.”

In our household, the word ‘petty’ was used to describe someone who was mean-spirited, small-minded, physically weak and cowardly, and in every way contemptible. Eustace Scrubb (from C.S. Lewis’ Voyage of the Dawn Treader) in his pre-Dragon days was the template for this word.

So whenever my Mom wanted to tease and needle me for my lack of virtue, she would designate me as ‘Petty Officer’ or even (shudder) ‘Chief Petty Officer’. Howls of outrage ensued.

Jump forward with me, across the mists of time, some 40 years. My older two sons both participated in the Naval Junior Reserve Officers Training Corps (NJROTC) program at a local high school, and David has decided to follow in their footsteps, these past 18 months. 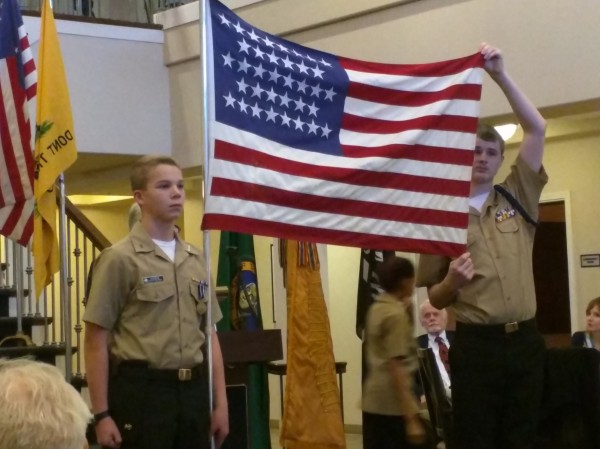 David in his standard uniform, participating in a Military Order of the World Wars flag event.

Although he managed to distinguish himself early-on, receiving several quick promotions, there was a change in leadership in the program, and David found it difficult to gain the attention and favor of the new Commander, who also had no prior experience with David’s older brothers. Higher ranks tend to be awarded in direct proportion to the amount of time a student invests in the program, and David has been unable to spend very many extra hours at the school this year because (a) he doesn’t yet drive, and (b) the difficulty of his online classes through the Potter’s School.

And so he seemed to languish as an E-6, Petty Officer First Class, PO1. He went to the ‘boot camp’ 4-day exercise even though he was sick, and many of his peers were promoted, but not David. He waited for several months, yet each time merit promotions were awarded, David’s name was not on the list. It was a difficult time for him and for those of us who were watching.

Finally, I took David aside for some fatherly counsel. Since David is not a quitter, I felt free to explore some other options.

Me: “David, if the leadership of the program can’t see your obvious merit, maybe it is time for you to spend your time in a more profitable way.”

I could tell he was not yet ready to quit the program.

David: “If I can just get this next promotion, it would mean a lot to me.”

David: “Well, if I can just get to the next rank, I can wear the SDBs.”

Suddenly it all became clear. Junior Navy enlisted uniforms are like most military uniforms the world around – they’re designed to be both uncomfortable and unattractive, and they succeed admirably. But the Service Dress Blues (SDBs), now, they are another story altogether. Even high school students look very sharp in SDBs, as we have noticed at previous Navy Balls attended by our older sons.

A couple of weeks ago, David came home with a uniform on a hanger and a wide smirk. 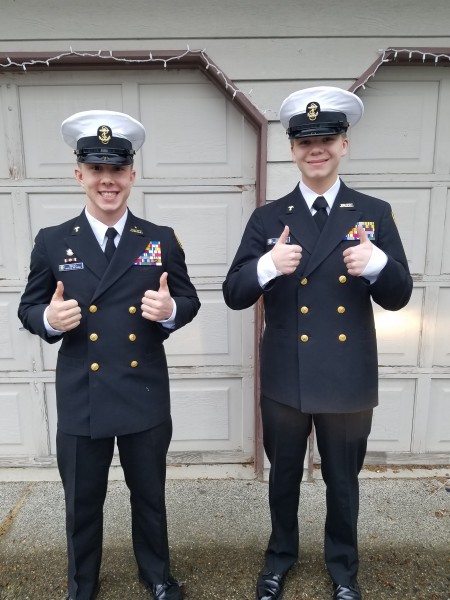 He always WAS a good lookin’ kid.

“What’s that? Did you finally get promoted?”

I peered hopefully (and a little enviously) at the uniform on the hanger.

David waved the hanger gently in front of me. Light gleamed off the gold buttons, ribbons, medals and the sleek dark blue fabric. David’s patience had paid off in a big way.

I’m sure my Mom will be so proud – there is finally a Chief Petty Officer in the family.

Family Photo
A Household of Men
A Kitten for Sarah