We recently had a photo shoot, about which Kathy wrote: Why Models Never Smile. It was quite the family outing, right up there with cutting a Christmas Tree or going to the Pumpkin Patch, but with none of the fun.

Actually, the photographer was pretty funny, working hard to get us all to smile or laugh, bossing us around in fine style, and keeping a running count of the number of times Joshua rolled his eyes. She tried to steal my Diet Coke, though, which was not quite so amusing — photographers need to know where not to cross the line.

Today the disk with the pictures arrived in the mail. Kathy saw the mailman coming (and even tried to wait for him) but had to go out, and so the disk was left for me to discover. “It’s a good thing Tim isn’t tempted by that sort of thing,” she consoled herself. “He’ll have no trouble waiting until I come home, so we can look at the pictures together.”

I called Kathy as I ripped open the envelope and slapped the picture disk into the CD tray — I was redirected to voicemail, since she apparently screens her calls. “Hey, Sweetie, just wanted you to know that the photo disk arrived today — I’m just loading the images onto your computer … ”

As I tell my boys, wife-taunting is a major perk of being married.

I received a call back almost before I had finished leaving the message. “What?” shrieked my bride, as I hurriedly adjusted the volume controls on my phone. “You had better just walk away if you want to see another sunrise, or whatever they call it when the sun comes up in the, er, ‘morning’.” (My beloved doesn’t really believe that there are two 7 o’clock hours in each day.) As threats go, it wasn’t particularly articulate, but chillingly effective, nonetheless. I backed slowly away from her computer, leaving the mouse pointer poised suggestively over the ‘OK’ button on the Image Loader wizard window.

I guess I’ll just have to wait until she gets home. Unless I were to pop the disk out and load them on a different computer, and then put it back …

Nah, she’ll ask me point-blank if I looked at ‘em, and then I’d dig myself even deeper. I’d better just wait …

What if I only looked at one picture, would that count? I could then ‘honestly’ say, “No, dear, I didn’t look at the pictures!”

Oh, I can’t stand it. I’ll just have to post a picture, so you can all enjoy. Here it is (scroll down): 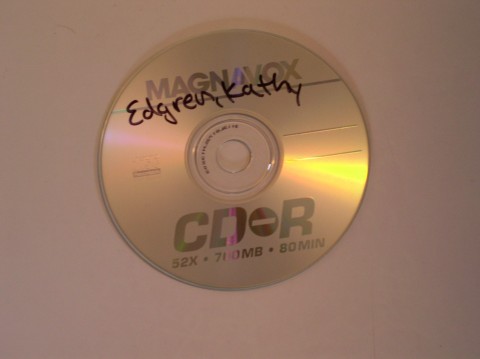 There. I shared the whole disk with you. Nobody can say I’m stingy.

It’s cold and wet here in western Washington. Not only is it raining, did I mention it’s cold and wet, but it’s also dark by 4:30 pm. This does not suit my night owl nature. I like it in the middle of the summer when the sun is bright and shining until late in the day.

Thankfully I have friends who aren’t daunted by silly things like bedtimes and schedules. Oh no, these girls know how to live. All of which means last night I was ordering coffee at Starbucks at 9 pm and heading off for a 10 pm move. Yes, a 10 pm movie! On a school night!

The heady night life of a homeschooling mom.

A few notes to self:

There are no pictures of the late night movie outing or of today’s sleepy homeschool teacher. There are times when even I know to leave the camera turned off (to protect the guilty).

On a complete and totally different note (that’s what happens when I don’t sleep – no attention span whatsoever), here are two online savings we used this week:

Buy.com:
$10 off if you open a Google checkout account.

Kathy — offer to get some sleep

They’re exhausted. It’s hard work being beautiful. Really, do you ever see professional models smiling? I think the more money they’re paid, the less they smile. Being haughty and angry is terribly chic these days.

I wonder if they have servants (or mothers) to pick up their clothes after a photo shoot. 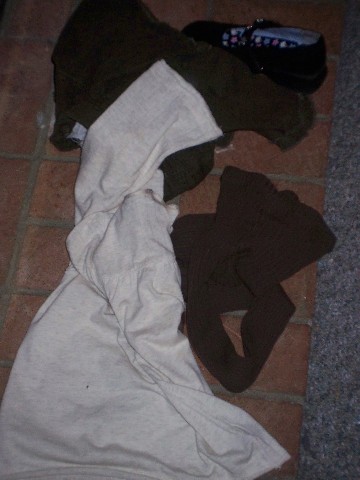 I also wonder where Sarah put the other shoe.

Do fashion models wash their own dirty clothes? Maybe that’s why they’re always grimacing in those magazine ads. Too much laundry and too little time between the parties. 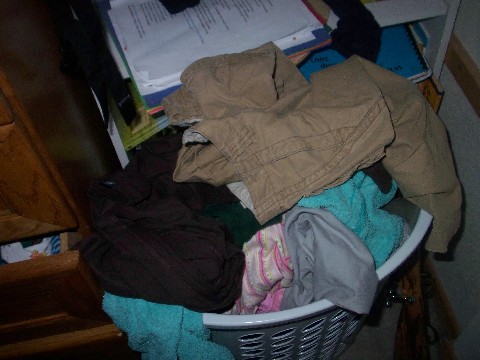 At least David’s clothes ended up in a laundry basket.

A good stylist is critical to the success of a celebrity. 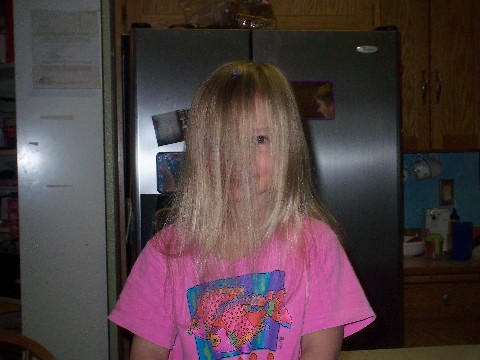 Of course, until any of these kids actually BECOME celebrities, they are stuck with Mom as hair dresser, stylist, make-up artist, and assistant. 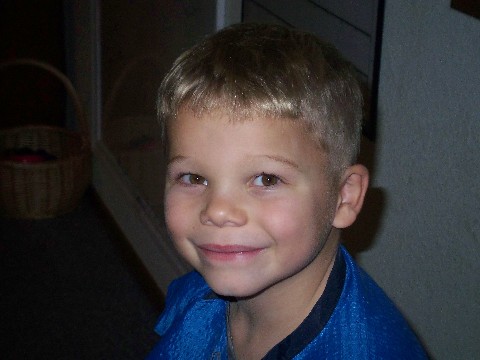 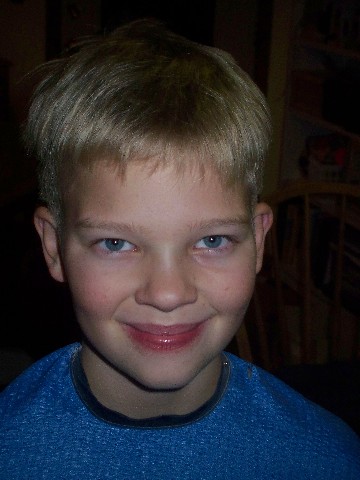 David and Daniel are some of my best customers. Okay, they don’t pay and they fuss a good part of the time, but then they don’t have a choice on how their hair is cut so I figure it all comes out even in the end.

Thank you for all your support and advice regarding our family portraits. It’s faithful readers like yourself that keep me blogging day after day.

I’ll be sure to share a picture or two (or 30 or 100) from our amazing photo shoot when I get the cd. The photographer was wonderful! I even managed to impress her with talk of the blog and the staggering number of pictures we’ve taken so far this year.

Although, now that I think about it, she might not have been ‘impressed.’ Hmmmm. That’s all right, Sarah was there to defend the blog. 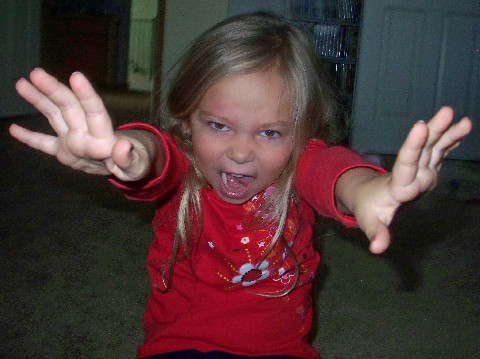 WFMW -- Blogging Niche
WFMW - Diet and Exercise
Too Much Coffee

I can’t believe December is literally racing around the corner. This weekend a friend suggested I write something about Christmas gift ideas for kids. You know, the gifts that will actually hold the children’s interest and survive more than a week or two of playing. Classic toys that have proven to be fun and timeless.

I thought this was a fantastic idea, especially the part about how it should all be organized by age with suggestions for each grade level. Great, wonderful, excellent idea, except for one thing. I don’t have time to write this amazing blog. This particular friend is not only a serious bargain shopper, but a woman of discerning, good taste, so I asked (begged, pleaded) if she would email me the list of gifts that have been favorites in her family. “I’ve started writing down a collection of ideas, including catalog clippings, several times,” she said, “but I just don’t have TIME to finish.”

Obviously what we moms need is more TIME. I hear time makes a great stocking stuffer, gift certificate and looks great wrapped under the tree. Right.

Okay, in lieu of actually doing the work of creating a gift idea blog myself, I figured I would share what I’ve found online. I’m not ruling out the idea of generating my own Christmas treasure blog, but for now, let’s steal from others. 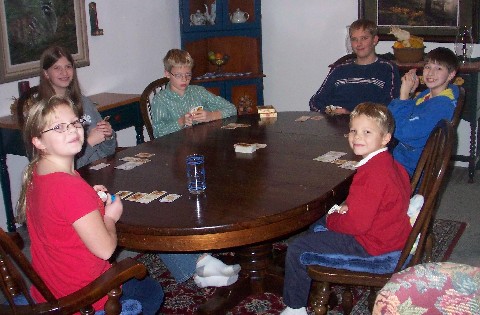 Of course, games are ALWAYS a hit in our family.

Not Made In China – you’ll love this, a blog dedicated to toys and other products that are NOT made in China. As toy recalls continue to mount up, it’s nice to know there are other options available.

Christmas Shopping Carnival – this blog post has links to 70 other blogs (each one opens in a separate window) where people share what they are buying this year. If you have time (there’s that word again), you might enjoy browsing through some of the blogs and see if anything inspires you.

Christmas Books – a homeschooling friend has a collection of favorite Christmas books (complete with cover shots) on her blog. I saw some old family treasures as well as some new ones I’m eager to read.

Christmas Countdown – this website helps you get organized and enjoy a stress-free Christmas.

Advent Bible Study for Children – this is a wonderful, inductive Advent Bible study. I have done it several years with the older three children. There are coloring pages, scripture passages to study, and questions to answer. 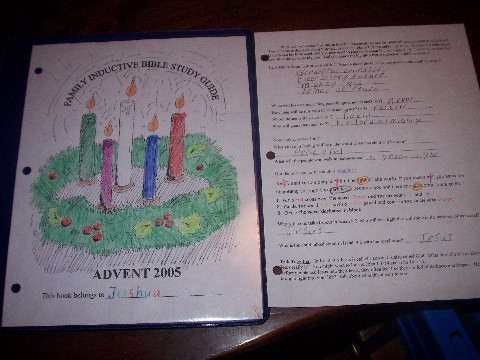 Unusual and Unique Gift Items – cause you never know when you might want to buy someone a duct tape wallet.

There you go, I’ve exhausted my knowledge on the subject of Christmas blogs. Now it’s up to you to share your creative ideas, favorite catalogs or blog links. This is a safe place to reveal gift purchases and secret plans, as I highly doubt your spouse or children will pop through and read the comments.

What is your favorite children’s gift idea for this year? What about for your husband or wife? Grandparents? I have an EMPTY gift closet so I can use all the suggestions I can get.

There is a slight problem with blogging and letting the world (such as it is) read your rambling thoughts of photo despair; when you make a mistake you have to do some serious retracting.

Tim reminded me today that we took family portraits in March of 2006 when his sister was visiting from Georgia. 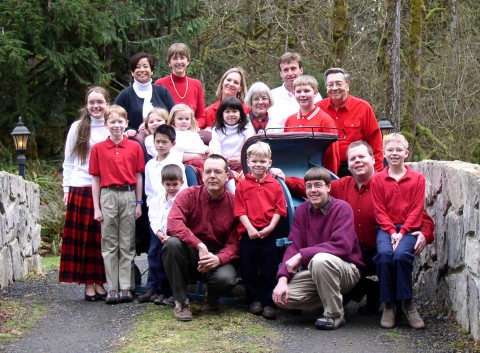 You have got to be kidding me!!!!! How could I have forgotten? We even have a lovely picture hanging in our entry way. I’m so embarrassed. My only excuse is that it wasn’t in a studio. Pretty pathetic, if I do say so myself. Tim’s mother made all the grand daughters gorgeous skirts and we were all coordinated in white, red and black. We took hundreds of pictures, with at least 5 cameras. 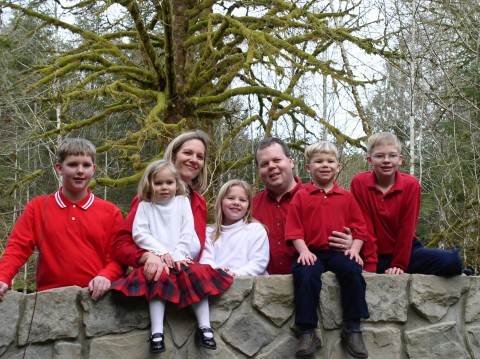 Please excuse my terrible lapse in memory. Hanging head in shame and heading to the store. Do they stock brain cells anywhere near the children’s clothing?