Raising a large family can be challenging in the Pacific Northwest. As the winter rains settle in, sometimes for weeks at a time, cabin fever can become a serious problem. The kids can get a little antsy, too.

When we first moved to Washington, Kathy used to throw the kids in the van and drive around, looking for sunshine. Happily, gas prices were comparatively cheap in those days, but it was a rather expensive and fruitless hobby. My wife eventually gave it up in favor of her affair with the coffee bean, in all its varied forms. “Nothing beats the rainy-day blues like a triple-shot-white-chocolate mocha!” she trills, cheerfully.

Later, we lived on the Olympic Peninsula, on the edge of the rainforest. During the winter, the sun would clear the ridge only between 10:30 am and 2 pm, when it deigned to shine at all. As we huddled inside, away from the incessant damp, we suffered from an excess of boundless youthful energy. We desperately sought an outlet for that restlessness; a way to take the edge off the bickering and fighting that seems to enshroud a family after a long day of being cooped-up together. 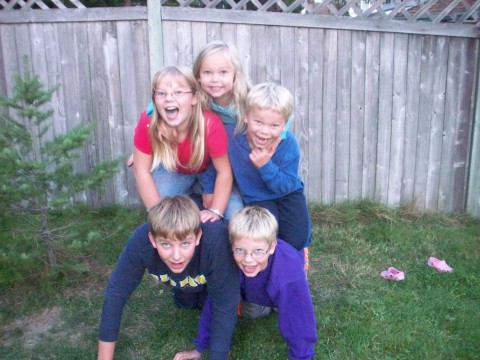 Late one afternoon, in a fit of brilliance brought on by exasperation, Kathy told the older three, “Go run around the house 5 times.” After what seemed to be half an hour of whining and finding their shoes, they all trooped out, and performed the requisite number of laps around the house. Coming inside, we were amazed to hear them cheerfully laughing together. They were able to concentrate on school for at least another half-hour, finishing the day’s schooling in short order.

Sometimes parents need a ‘punishment’ that doesn’t carry with it a strong sense of condemnation for wrong-doing. Kids (whose sense of justice is often finely-tuned) bitterly resent inequity or false accusations, yet parents (many lacking the wisdom of Solomon) are often unable to accurately and specifically assign guilt or responsibility for low-level bickering. This is where physical exercise comes in so handily: you can dish it out without prejudice even where there is no specific guilt.

As I recently explained to one of my sons, “When I use physical exercise as a punishment, I’m actually giving you a gift. I’m toughening you up and helping you to build strength, which improves your health and expands your horizons of possibility as a man.”

“Uh huh,” he agreed. “Sounds good. But what about you? Don’t your horizons need to be expanded?”

“I’m already a man,” I explained patiently. “My horizons are just fine. Go run to the end of the cul-de-sac and back.”

Running (or doing push-ups, jumping jacks, sit-ups, or whatever) gives a child some distance from conflict and burns off restless energy which often leaks out in misbehavior. The kids quickly learned that being sent to run the length of our driveway a few times (about 250′ each way) was not a big deal in terms of parental disapproval — sometimes we would send them to run as a proactive measure, rather than reacting to a particular fight or disagreement. More often than not, we found that it produces a cheerful spirit and deters all kinds of sinful mischief. 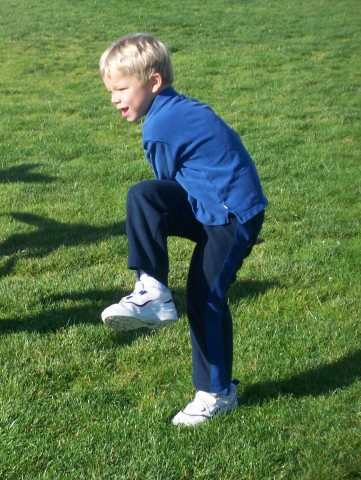 As Miyagi-san said, “If do right, no can defense.”

We also use physical exercise for restitution in cases of unintentional injury, when a child hurts a sibling by accident. I usually ask two questions:

“Did you hurt your brother [sister] on purpose?”
“Did you say you were sorry?”

If the answers are “No”, and “Yes” (in that order), and the injured party agrees, then I simply require the guilty child to apologize. I usually go on to say, “You are, however, responsible for what your body does, even by accident. To convincingly demonstrate your regret to your sibling, please give them 10 push-ups.”

For some reason, the injured party is usually satisfied, and the guilty child is not resentful — physical exercise is correctly viewed as a low-level, non-condemning punishment, and so we avoid creating a stumbling block of injustice. Sometimes the kids ‘settle out of court’ by voluntarily offering push-ups when they hurt each other; it’s a great way to avoid coming to my negative attention altogether. 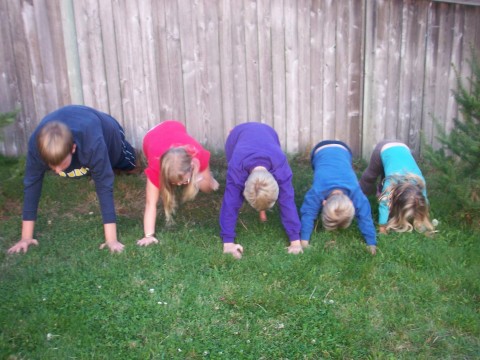 Nobody said they had to be particularly good push-ups …

I can just see it now, as one of my children accepts an Olympic Gold Medal. “Do you have any words for the children of America? Tell us the secret of your success,” begs a reporter. “No problem,” laughs my child, confidently. “Just be as naughty as you can, and you’ll be an Olympic-class athlete in no time.”

Hmmm. Maybe I shouldn’t rush out to borrow money against those future cereal-box endorsements.