In the late Summer of 2004, we moved to the suburbs; immediately Kathy signed us all up with a family membership to the local YMCA. I knew right away that we should have stayed in the country.

“It’ll be great,” Kathy enthused. “We’ll meet you at the Y on your way home from work, and we can all exercise as a family. What a good example to the children, to see us both taking our physical fitness so seriously.” 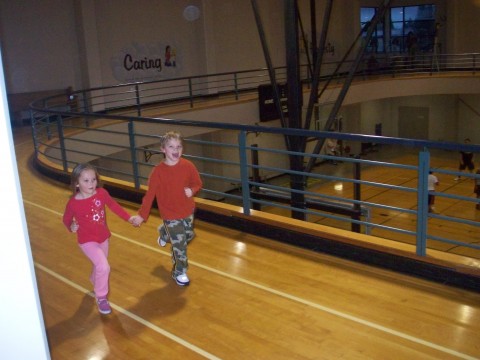 Who wouldn’t want to run, with such good company?

She painted a rosy picture. Healthy, smiling children and their thin (but muscular) parents, running effortlessly in single-file around the brightly-lit indoor track, or smoothly operating the gleaming exercise machines, to the envy and admiration of dozens of onlookers. Tired but laughing, we would drive home together, united as a family in this common goal.

After stalling for some months, I finally agreed to actually go to the YMCA and get my membership card. Inside, the rank smell of sweating bodies and the sensation of universal despair struck me like a blow to the face. Nervously, I let them take my picture, and immediately fled, before I was inadvertently sucked into this gloomy vortex of fitness. My worst fears were confirmed: joining the Y was like joining the Army, or at least it included many of the same odors.

Each week, my children go to the YMCA for Homeschool Physical Education, a program offered free to members, and the major reason we joined. They have taken classes in gymnastics, swimming, and a variety of sports and physical activities. Most of the time they really enjoy it, although they tend to dread the annual focus on Presidential Fitness testing. Cleverly remembering lessons from my Army days, I held aloof from such things, although I did unbend enough to drop the kids off at the Y when Kathy was at Bible Study Fellowship.

After more than eighteen months, Kathy convinced me to play Wally-Ball with the family after work, and I actually darkened the door of the YMCA for several weeks, trying to teach my children (and a few passing urchins) how to play this interesting game. It didn’t take, though, and I soon happily returned to my sedentary ways.

Today was a big day. After more than three long years of YMCA membership and not-so-subtle hints on the part of my wife, I finally went to the Y and actually used an exercise machine. Sadly, the paparazzi were not permitted inside, and there were no pictures taken of this momentous event. You’ll have to take my word for the fact that I logged a good 35 minutes in on a fiendish device my wife calls an ‘elliptical’. 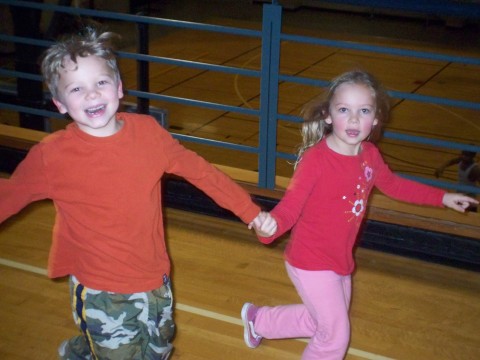 We did, however, capture David and Sarah’s running-while-holding-hands act.

A man of my years and girth tends to take a philosophical view of life; hopefully this will prove to have been a passing phase, like many before it. As Mr. Bennett said in Pride and Prejudice, “Don’t worry, it will pass more quickly than it ought.”

On the way home from church this evening, I was in a car accident.

Miraculously, this is the extent of the damage to our car. 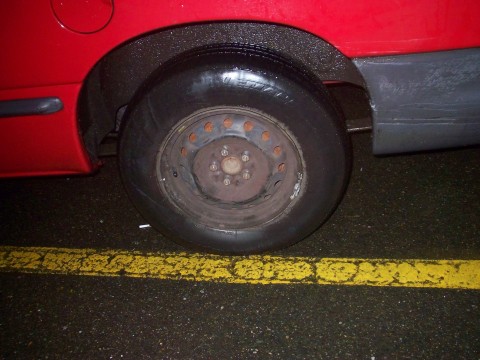 We lost our hub cap (it was subsequently run over and destroyed) and have a small gash in the side.

I was passing through an intersection near home when the driver, waiting in the left turn lane, decided (misguidedly) that she had the right of way and turned directly into the back corner of my van. It was rather traumatic in a slow-motion sort of way. I was not speeding or rushing through the light. I could see the other car was making the turn and I swerved as far away from her, over to the right as I could.

Poor Daniel, who was with me in the van. He thought we were going to “… hit the lamp post, explode, and that would be the end of us.” A car accident lawyer can assist people in filing complaints against insurance companies for car accidents. They also represent people in car, as well as other vehicle, accident claims. It is very essential for an individual who becomes the victim of a car accident that they contact a skilled accident lawyer as early as they can after the accident happens. It is important to get the highest recompense that the victims deserve for their injury and harm due to the accident.

When a victim of any car accident is going to search for a lawyer, they should take into consideration certain points about the lawyer. For instance, the lawyer should be knowledgeable as well as experienced in car accident and relevant cases. The key issue is the lawyer must be endowed with a thorough knowledge about injury law. They should know the rights of any victim, the severity of the accident, as well as, achievable recompense for that and also other necessary relevant factors. Besides, the car injury lawyer should be experienced in dealing with car accident cases and related cases. Experienced car injury lawyers know best how to defend victims against insurance companies – they can ensure the victim gets the best possible recompense. So, if the lawyer has a good record of defending and winning related cases, it will be beneficial for the victim. You can also visit https://www.norrisinjurylawyers.com/auto-accident/ for more information.

A good and experienced car injury lawyer usually provides some idea to the client about how to claim and take further legal steps against the insurance company in order to protect the victim’s rights properly. The car injury lawyers aid the victims in doing all the necessary things – they help the clients to arrange medical assistance, to contact the insurance companies, along with other important steps. They are generally experienced in evaluating necessary things like medical or police reports; they also conduct interviews of the witnesses. After gathering all the necessary information related to the accident, they try to find out how and why the accident actually happened and who was responsible for it. The lawyers know best how to construct cases according to what really happened – they will obviously do their best so that the victim can receive a just settlement.

Explode? Makes you wonder just what kind of movies he has been watching.

Unfortunately, the other driver received a harsher blow. 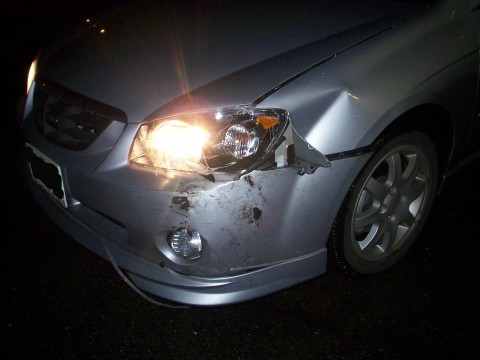 I can easily think of over 100 things I would rather be doing on a Wednesday evening than stand in a parking lot, surveying damage to vehicles that have collided on the road.

Praise God we were safe and no one was hurt!!

Here today, gone tomorrow, that’s pretty much what we say about snow in these parts. Last year we had a lovely snow fall. I rushed out and bought boots for David and Sarah.

It didn’t snow again the entire winter. I don’t think they EVER even wore the darn boots.

So, there is no need to feel jealous of our abundant snow fall. True, it covered the streets (briefly) and was perfect (dense and solid, just right for snowballs, men and forts), but it’s melted now.

All that remains is the odd clump of snow here or there around town. 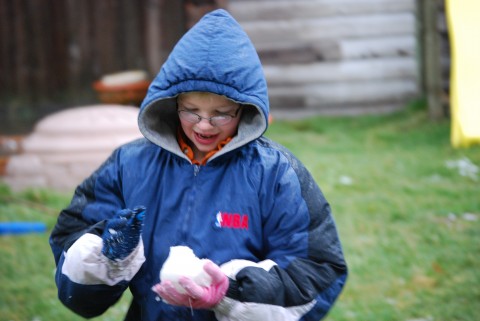 Yesterday Daniel gathered enough snow to make one last snowball before the rain settled in.

The Last of the Snowballs – the children long to see more of your kind around these parts. Me – I’d go for a week in Hawaii.

We’ve written about how our family handles computer game privileges before, here and here, but I thought I would share the concept in a bare bones, easy to read post.

Every Wednesday the children (and Tim) receive poker chips equivalent to 3 and 1/2 hours of computer game playing time. 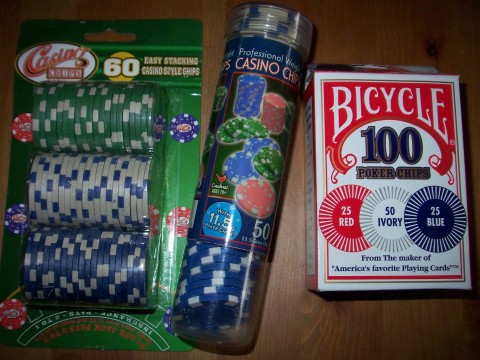 Computer time is carefully monitored by the use of timers (see our Tuesday Parenting Tip for more on our love of timers). We have several kitchen timers and a stop watch that we employ to keep track of game time.

One of the saddest sounds in our house for the children (and Tim) is that little beeper, signifying 30 minutes has ended. Oh, the moans and groans you will hear from the children (and Tim). On the other hand, this crew can hear the clink of a chip as it hits the floor or counter from any room in the house. It’s a tragic thing to lose a chip to the washing machine where it is claimed by the laundress.

Benefits of this Discipline

I’m sure Tim (and the children) can share further blessings from this practice, if we ask them. Stop by Rocks in My Dryer for other blogs with great tips. You’re welcome to leave a comment on our Duckabush Giveaway post and enter a chance to win some Starbucks and chocolate.

It’s really quite impossible to do school when there is snow, glorious snow, covering the yard. When I got up this morning, Daniel, David and Sarah were already dressed and pulling on snow pants. 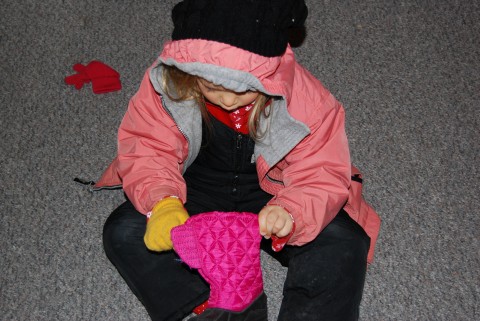 Snow pants – before 9 or even 10 am. There’s just something wrong with that picture. I convinced the kids they should wait until at least 8 am before venturing out into our little Winter Wonderland. I felt sympathetic for those souls still snuggled in bed (why wasn’t I one of them?) who probably didn’t want to hear shrieks, no matter how joyful, that early in the morning.

Literally at the stroke of 8 am, the Three Rascals charged out the door, into the back yard. The snow was perfect – think and dense – just right for making snowballs, snowmen and snow forts. 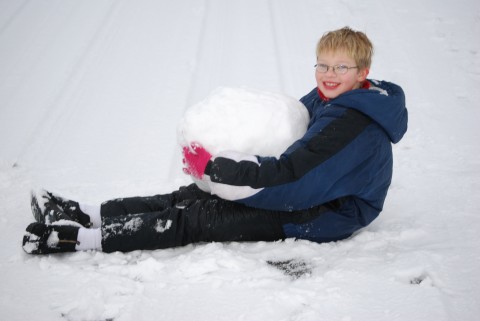 “I wonder if this would work as a snowball?” “If I can just carry it over to the side of the road.”

It’s important to know what to do with a good pile of fresh snow. Inviting a friend over for a game of King/Queen of the Mountain is a good place to start. 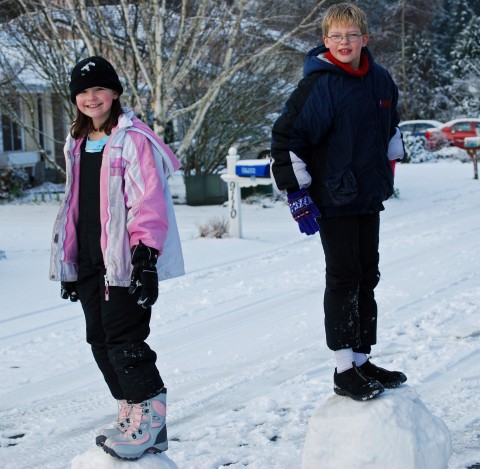 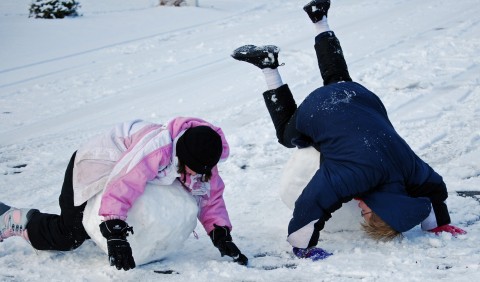 If you can’t stay on the top, at least you can have company on the bottom.