They say a picture is worth a thousand words, so three pictures ought to be worth at least a short story. I must put something on our blog, or people like Joshua will start to leave snide comments and send subtle emails.

This first picture speaks for itself: 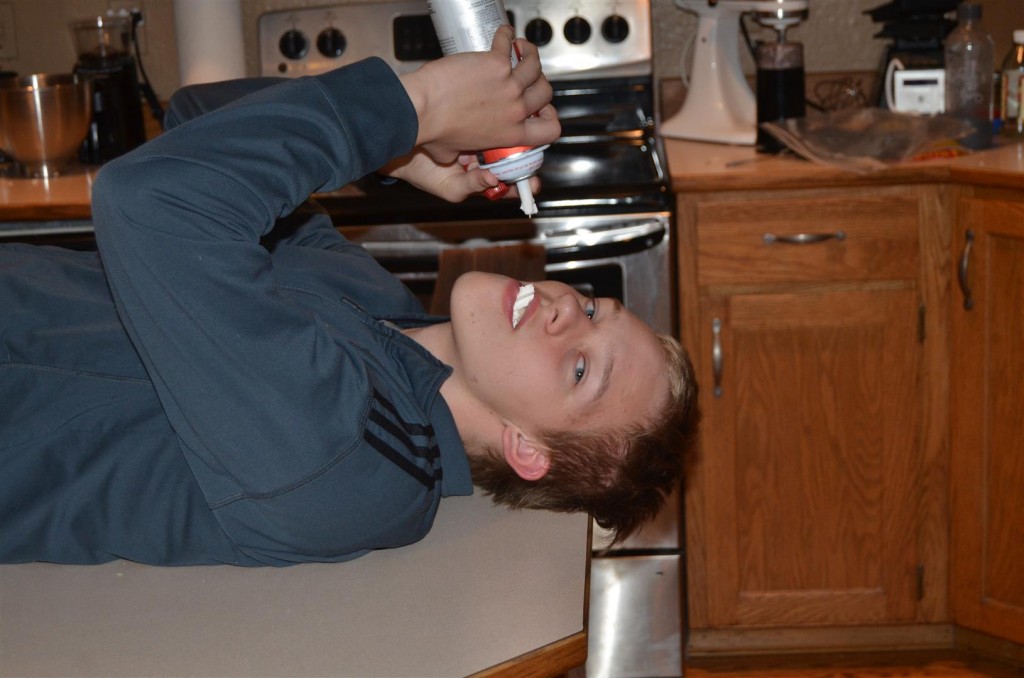 Daniel got a can of whipped cream for his birthday … so of course, this is how he uses it. I’m not sure why he needed to drape himself across the kitchen island to fully enjoy it …

Last weekend, Kathy and I attended a fund-raiser dinner for some friends who are going away for a year’s worth of training in ministering to deaf teens, and we sat with Tung and Debbie and John and Shari. 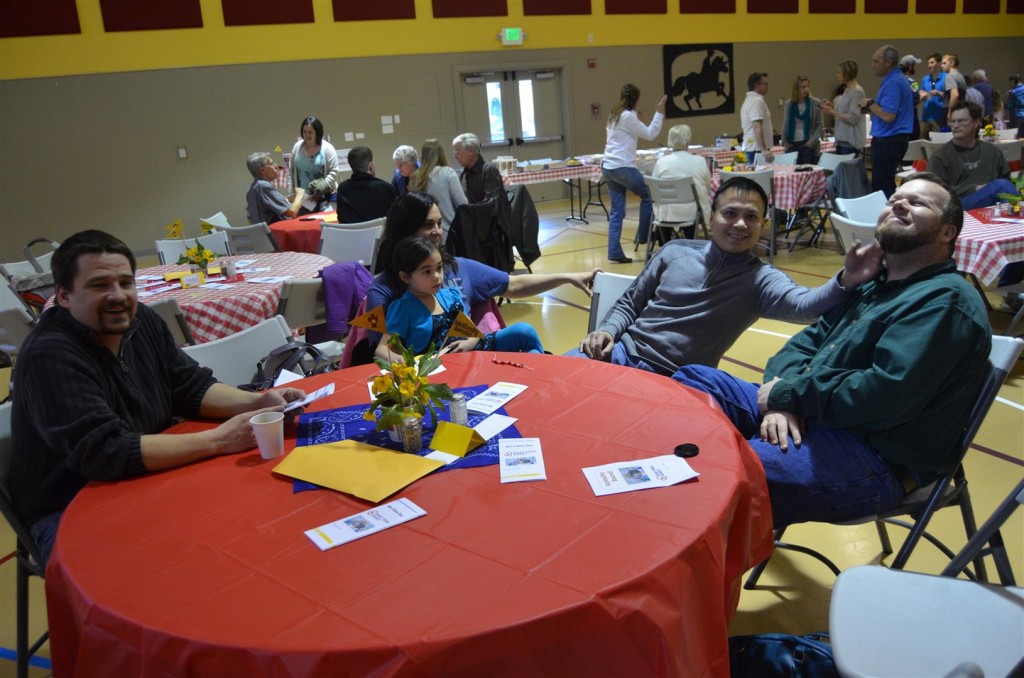 Tung’s bitter jealousy of my beard continues to rage.

Little did Tung know, I was prepared to defend myself. 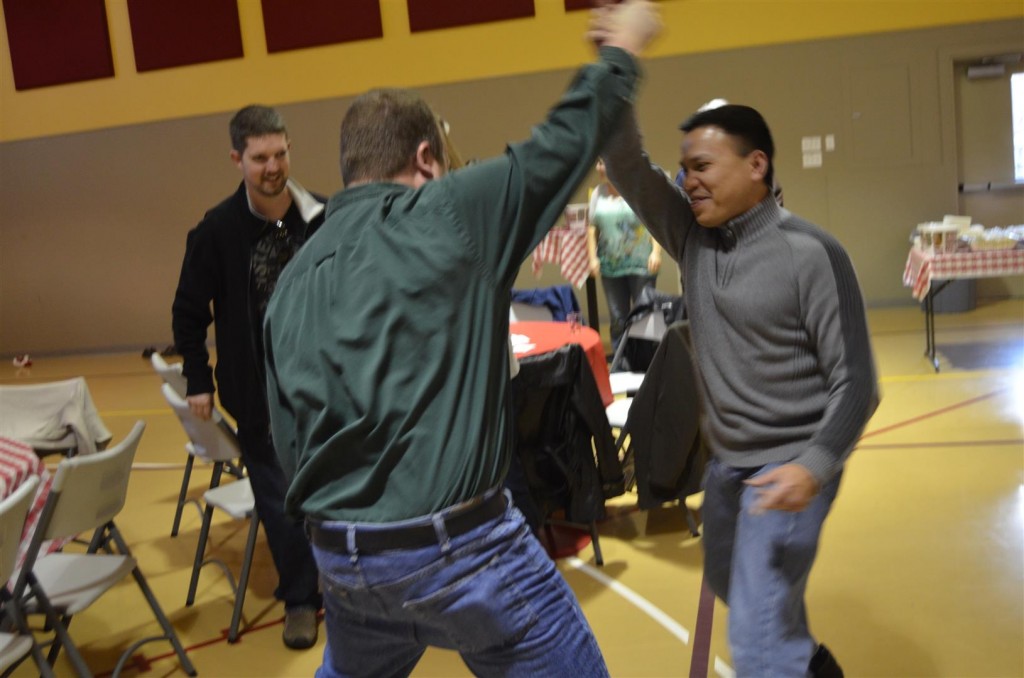 It takes two to tango, or possibly to foxtrot.

This month just keeps getting weirder and weirder.

Vote Early and Often!
A Household of Men
Dr. Jekyll and Mr. Pied

No matter how you might resist or resent, the very nature of time propels it forward relentlessly, grinding away like sandpaper over the surface of your life. Some days pass slowly, as though an idle three-year old is gently wiping with an oily rag, while other weeks and even months disappear in a pile of sawdust as if someone is vigorously working with industrial coarse sandpaper. Of course, you don’t know if your life is better represented by a four-inch slab of oak, or a quarter-inch veneer of soft pine; either way, the true grain of your heart is revealed, even if you do pick up a few nicks and stains along the way.

Not my actual sander

When Kathy and I were first married, we (like most parents) had no idea what we were getting into, or how quickly it would happen. It seems only a few months ago, Daniel was driving his little tricycle up and down the ramp of our moving van, laughing hilariously, while Granddad loaded and arranged the boxes for our 1999 move to Washington State. After what seemed only a year or two had passed, he’d graduated to a regular bike and was joining the family for a bike ride. 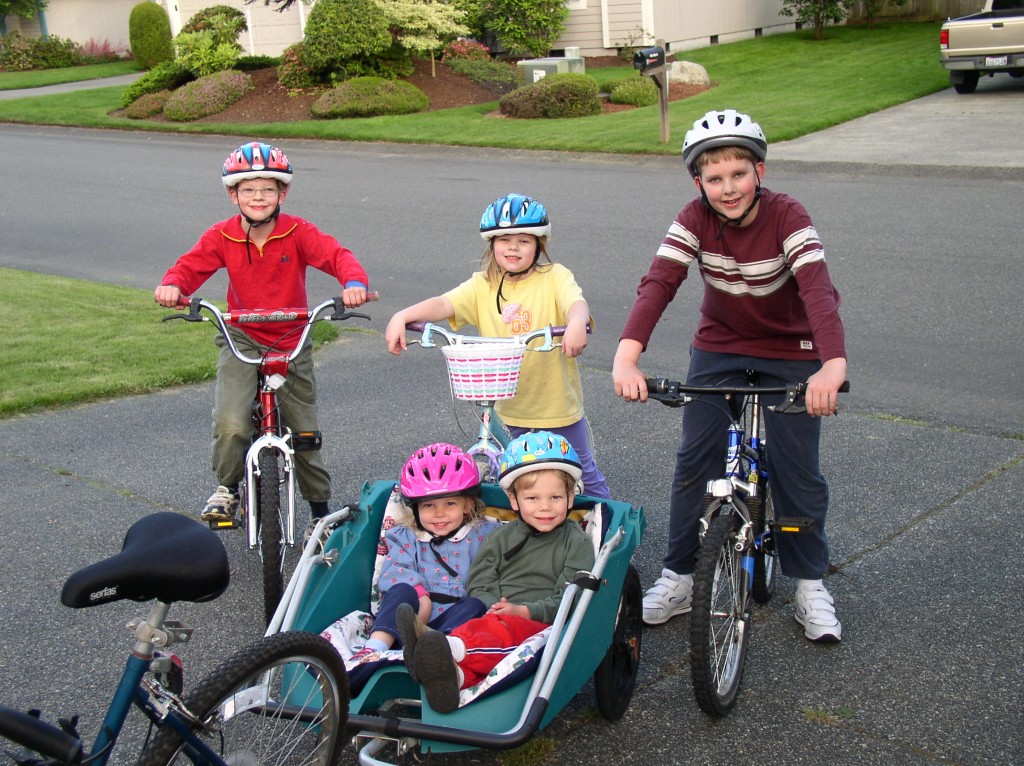 Family bike rides were always challenging, although David and Sarah had a pretty cushy setup.

Suddenly we look around, and Daniel is taking Driver’s Education classes, practicing his driving with our car at every opportunity. Suddenly Daniel is scheduling drives on the interstate with instructors at the Driving School (better them than me, I suppose!).

What has happened, to transform this tiny rascal, who needed help to climb onto the seat of a car, into a six foot, three inch behemoth of a young man? Somewhere along the way, someone’s been using a belt-sander on the years of my life.

Daniel has always been a bit of a dare-devil, risking life and limb on almost a daily basis in his quest to know himself and his limits. Voted unanimously by the members of our family as ‘Most Likely to Spend Time in the Emergency Room’, Daniel lives his life with a joyful exuberance and a willingness to take risks that would make any movie action hero take three Advil and find somewhere quiet to lie down. 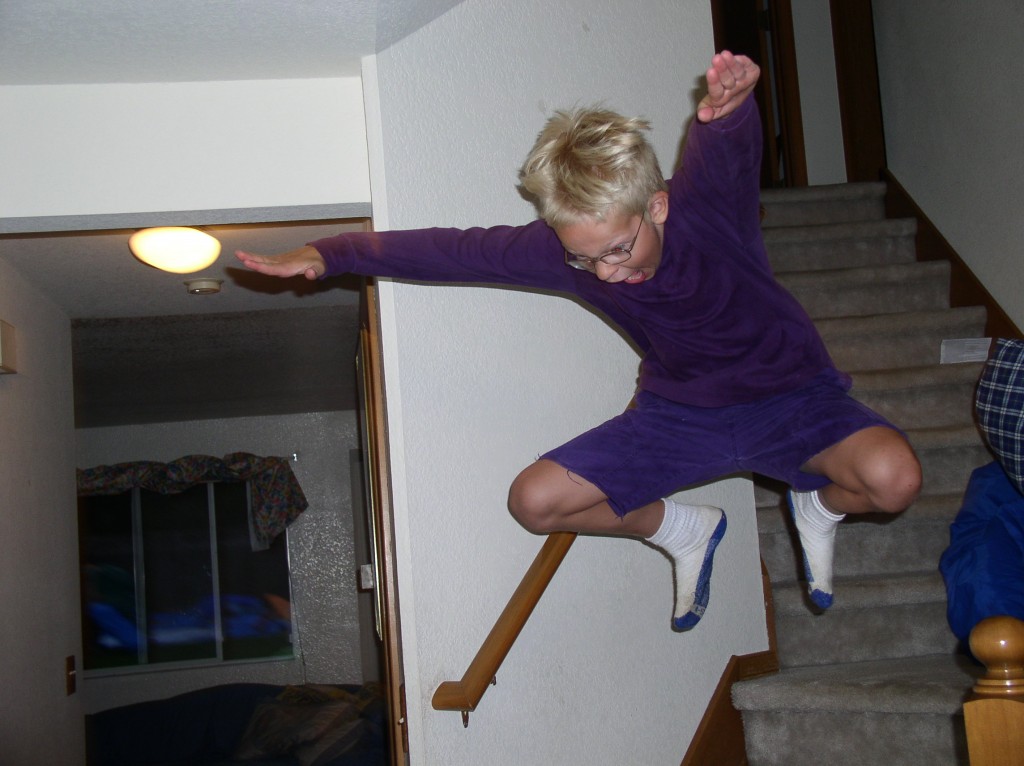 Why use the steps, when you can jump?

“Daniel is his own stunt man,” people have been known to observe.
Just a few months ago, Daniel and his friend Zachary went for a bike ride in a park, near our house, with David joining them, presumably as their chaperon or keeper. Returning several hours later, they exhibited enough scrapes and bruises to rival Lewis and Clark, having wrecked one of the bikes and damaged another. Apparently they tried to ride their bikes down a cliff, and even sensible David was drawn into the fracas. 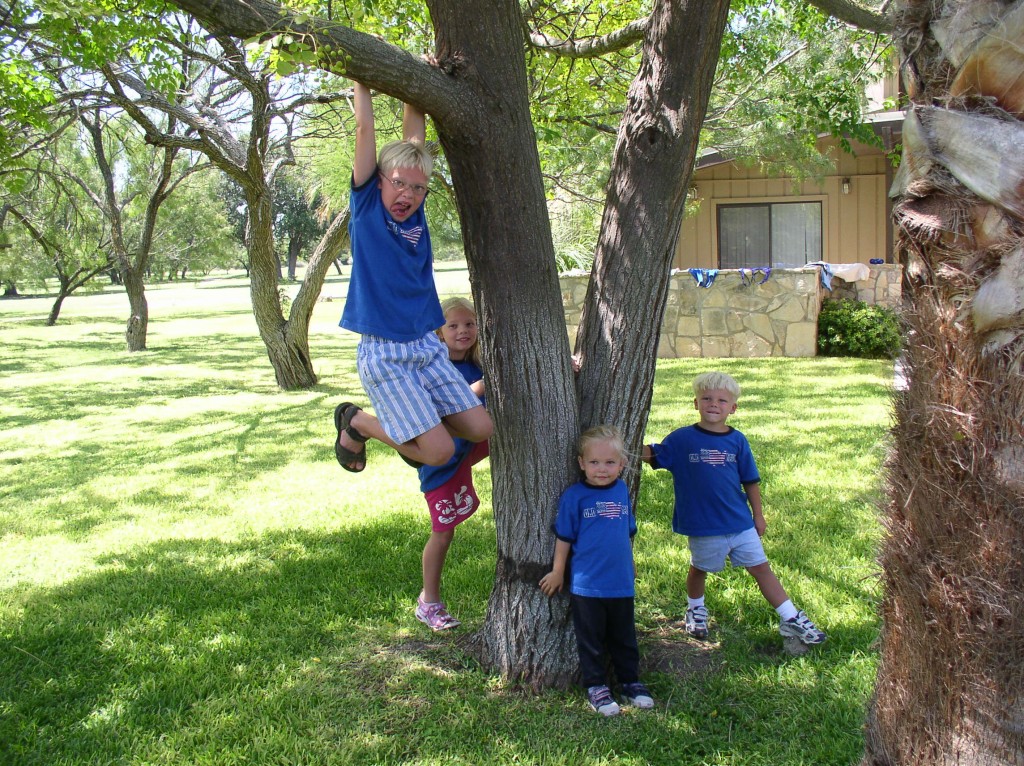 Daniel and his stunt crew at Fort Clark in 2005. The tongue is optional, for this particular stunt.

Strangely, Daniel is a careful and competent driver. When I ride in the passenger seat, I don’t feel afraid, even though he is still a very new driver. He seems to have a steady hand on the wheel, doesn’t drift around in the lane, and doesn’t over-compensate when he makes a mistake. He brakes with plenty of room to spare, and conscientiously obeys all posted speed limits, unlike his father. 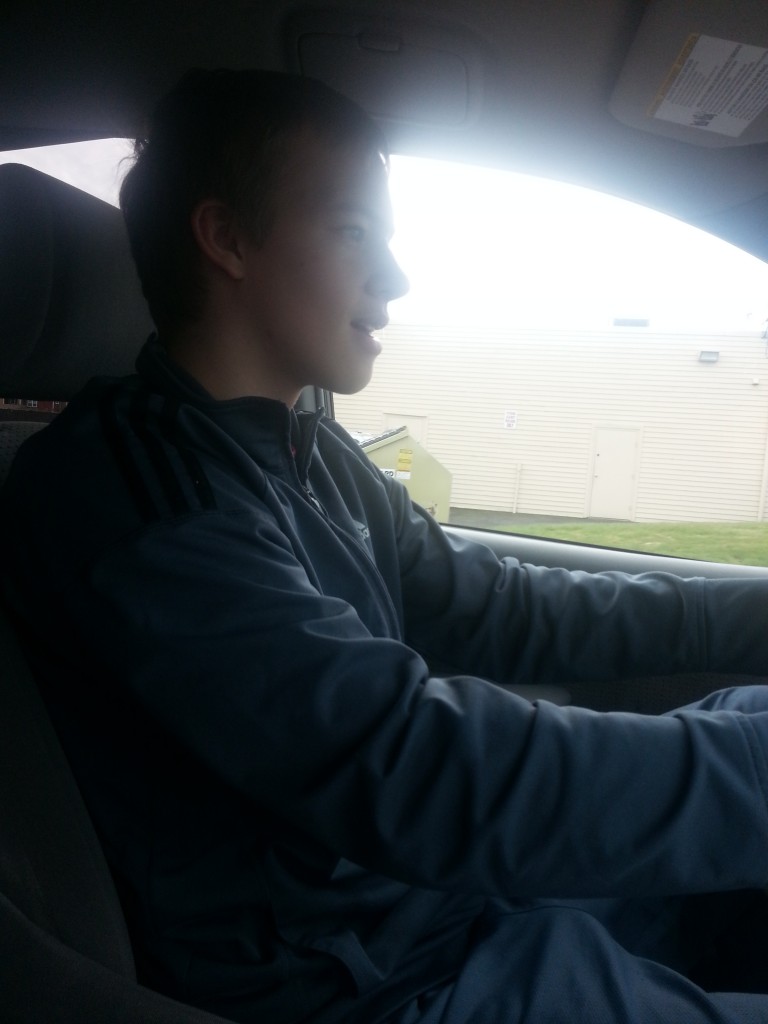 But he really likes to drive. Every time we go anywhere, he asks if he can drive. The problem is, after thirty-two years, I still want to drive, and it is hard to give up the wheel.

When I was Daniel’s age, I spent every available moment on the road. I would cheerfully volunteer for any errand that involved driving, and any excuse would do, to get me behind the wheel. My best friend (Phil) lived almost 40 minutes away, yet I saw him at least three times a week.

Sometime around my junior year in high school, my parents bought a little copper-colored hatchback Chevette, so that my Mom would have a car to run errands when my Dad took the family car to work. As it turned out, my Mom rarely drove it. I drove that little car into the ground; by the time my parents gave the car to my brother as a graduation/wedding gift, it was a well-used car. 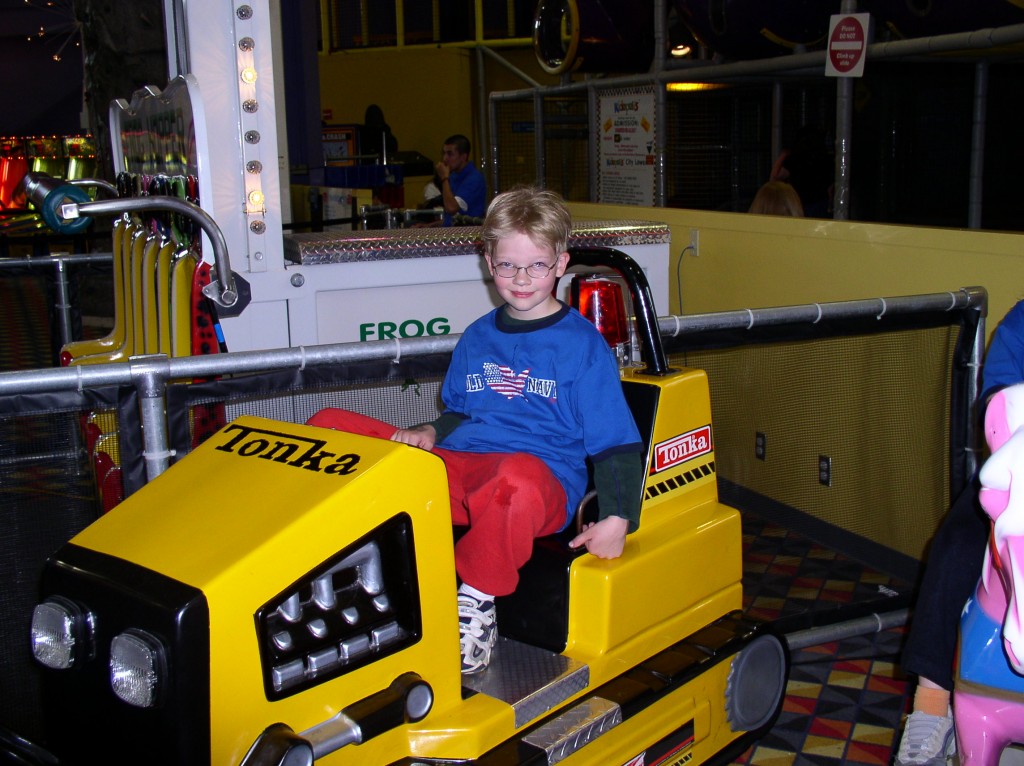 So far, we’ve held off on buying Daniel a car. Somehow, we just never seem to get around to it.

I remember one time, I was especially troubled by my love life (or lack thereof), and I decided to drive around the beltway of Washington, D.C. (about 65 miles) to give myself time to think. With gas under $1 a gallon, my world was the open road, and that little Chevette became a familiar sight on the highways and byways of Northern Virginia. 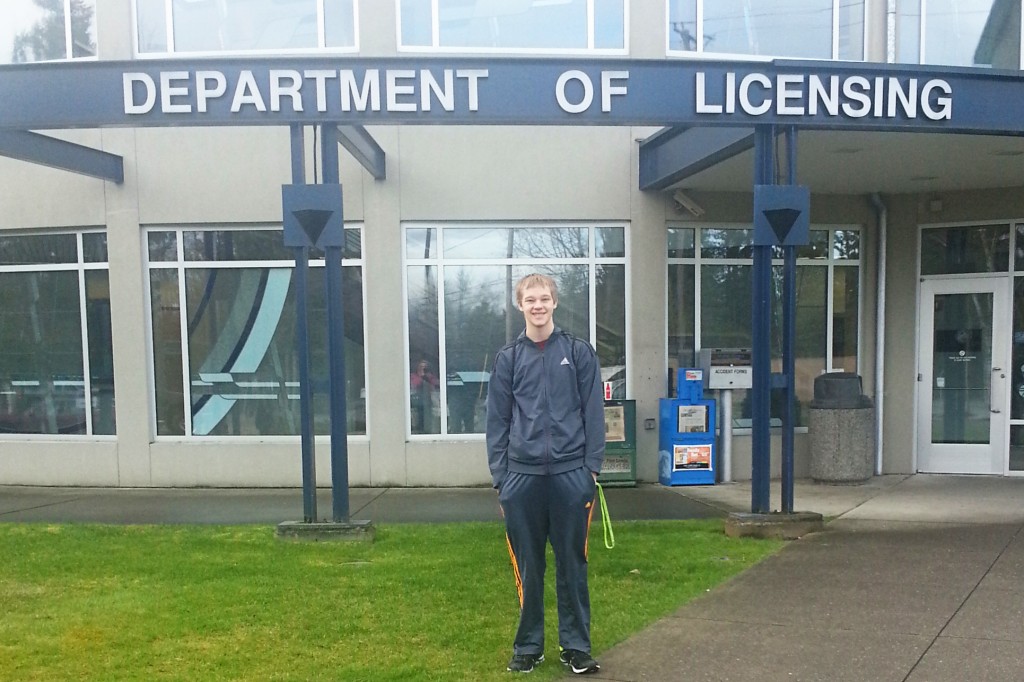 Dan, on his way into the Department of Licensing, to get his learner’s permit.

I never have understood why my parents were so generous with that car, because all this was happening during a time when I was being especially hateful to them. Maybe they saw the car as cheap therapy – it is certain that driving did seem to cool my blood and restore my soul in some way. 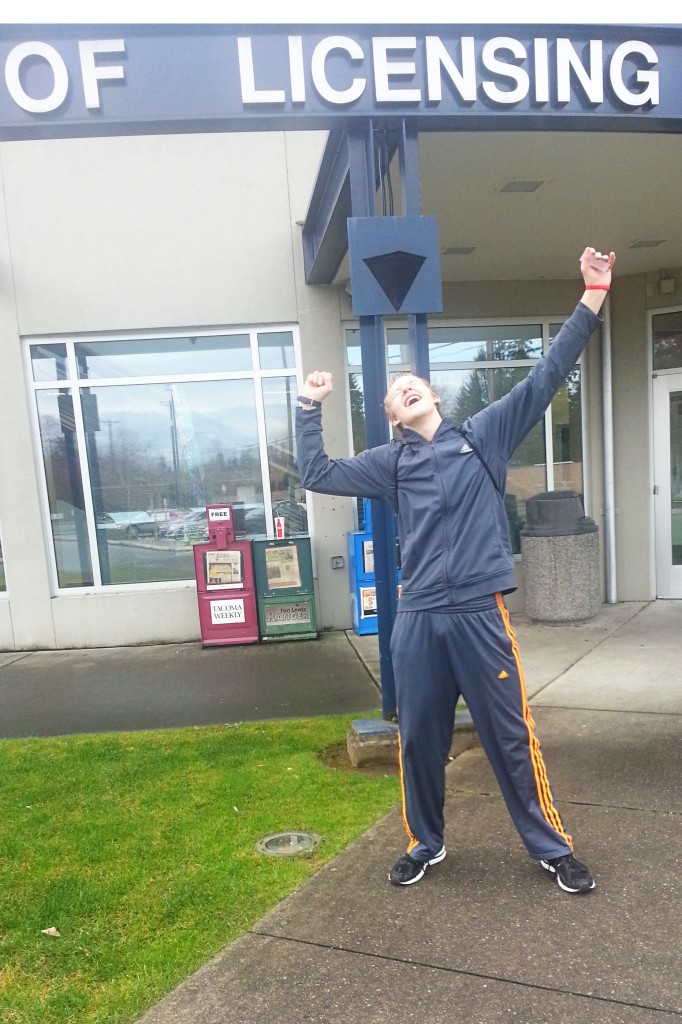 Celebrating the acquisition of a shiny new learner’s permit. Daniel was always very shy and retiring.

So I understand why Daniel wants to drive, and I fully expect that if he ever gets his license, he will disappear into the wilds of Western Washington, if he can find a way. As I recall, Joshua drove off to ROTC pretty cheerfully, most days, in my little Honda, and Rachel zips off to Pierce nearly every day in her little Kia.

As soon as Daniel gets some kind of job, I’ve told him he can get his license. He’ll need a job, since I require my high-school children to pay part of the ridiculously-expensive auto insurance that kicks in when I add them to my policy. Here in Washington, a 16-year-old boy adds about $120 a month to our policy. I suppose the insurance company may expect that the apple might not fall far from the tree — I had seven accidents (most of them fender-benders with a work car) in my first year of driving — one before I even had my license.

Let’s see if we can avoid a repetition of that particular history, OK, Dan?

I got a strange email from my oldest son, today. It was rather cryptic and obscure — I couldn’t really figure out what he was getting at. Sometimes it is best to just say things plainly, but you know how these college students are — so clever, maybe even too clever. 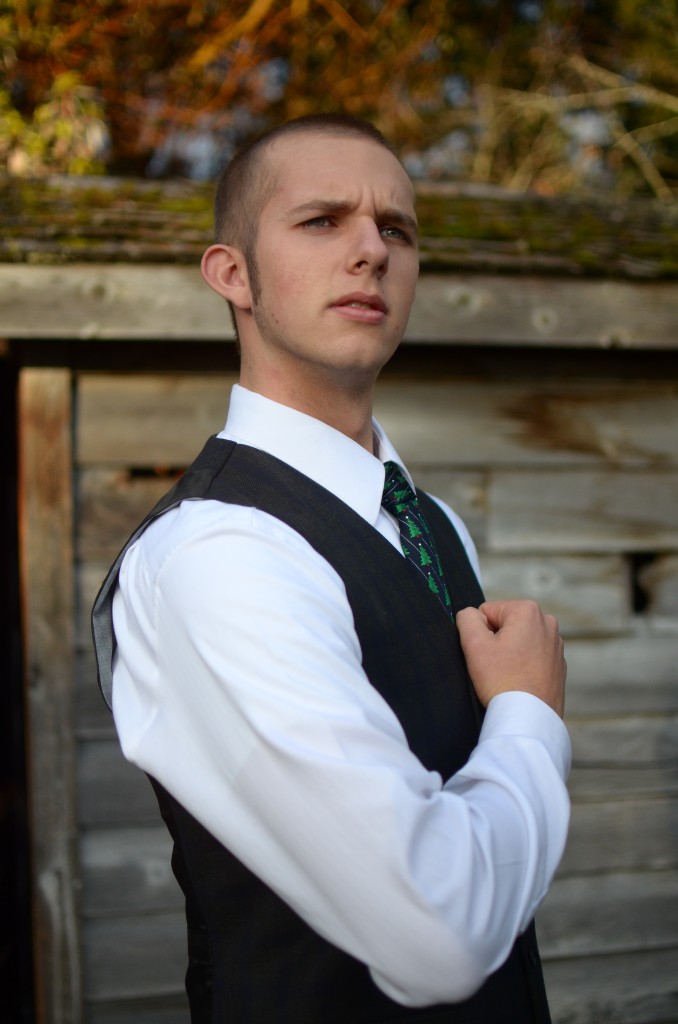 He seems so straightforward in this picture, you’d think he could say what he meant.

Here’s the text of the email:

“My oh my, what a lovely day. I almost think the only thing that could make this day better would be if I had a blog post to read from my beloved family.”

“Gee, guys, my parents always taught me not to steal from helpless old ladies, so we should probably call it a night. On the other hand, they haven’t blogged in so long, they must be trying to tell me that everything they taught me previously is null and void… So lets go for it!”

“As my old Pappy used to say,
– Fortune favors the blogger.
– When in Rome, blog as the Romans do.
– When the blogging gets tough, the tough get blogging
– People who live in glass houses should blog more.
– Birds of a feather blog together.
– Discretion is the better part of blogging.
– Never look a gift blog in the mouth.
– If it ain’t broke, blog about it.
– One man’s trash is another man’s blog.
– Beauty is in the eye of the blogger.
– Necessity is the mother of blogging.
– A blog is only as strong as its weakest paragraph.
or something like that.”

As you can see, I was at a loss. What could he possibly be looking for? Is he asking for a care package? Is he hinting that he is having trouble in his classes? Trouble with a roommate?