Weâ€™ve been enjoying Indian Summer here in Washington for the last few days, which has been delightful. The weather really seems to have changed on my birthday, for which I take full credit. Yesterday the sun shone all day, and we enjoyed temperatures in the 70â€™s â€“ Iâ€™m told that today is likely to be the same or even a little warmer.

We were finally able to schedule some time at the Duckabush House. It is a little funny, because I have been anxious that the house be sufficiently used by The Refuge as a practice retreat center. During the winter, when usage drops off (what sane person wants to â€˜vacationâ€™ in the Duckabush valley in January?) it seems as though the house lies empty week after week. This summer and fall, however, have seen a steady stream of â€˜customersâ€™ using the house, and it has been difficult to find a time when we could stay there. 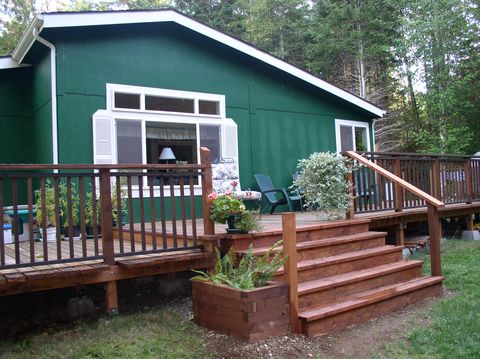 One pleasant surprise was finding that my Dad had arranged for these stairs to be built, a long-intended part of the deck that I started.

In honor of my birthday, we drove out to the Duckabush on Friday night, and spent Saturday, Sunday and Monday there. Dad and I worked on the deck railing, Mom and I planted blueberry seedlings, and a good time was generally had by all. The kids lost no time in arranging play dates and sleepovers with various friends and kept it up all weekend. My folks had planned a birthday meal for me on Sunday, and we invited a bunch of the old gang over for dessert afterward â€“ surprisingly, everyone was able to come. It was very nostalgic to have the house filled up with these five neighbor families and their children. I did a count at one point â€“ considering Kara an adult, I think there were 14 adults and 19 kids in all â€“ a goodly crew. 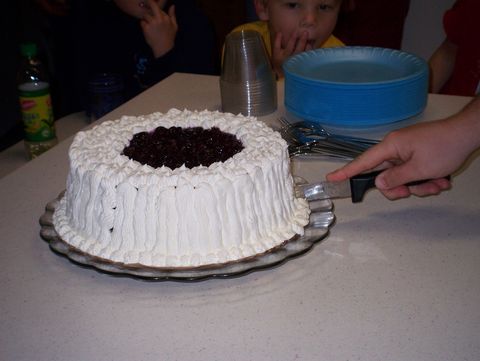 Mom made me a Black Forest cake, always my favorite.

It has been two years since we moved away from that valley, and a lot has changed in terms of kids growing older and people changing in general. I feel I have matured a bit, which is certainly not before its time. It is very cheerful to see first-hand that being a Christian makes a difference in my life and brings about healing and forgiveness in relationships. 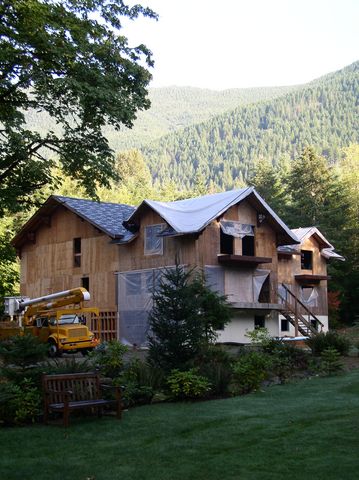 The Main Lodge at The Refuge continues to be built, and may be ready for use by Christmas 2007.

At one point my youngest son (David) arranged his â€œfirst sleepover EVERâ€ with a boy he has generally considered to be his â€œbest friendâ€ (even though they rarely see each other these days). As they played together, it was discovered that David did not know how to ride a bike without training wheels. Sadly, he confided to his friend that I would not remove the training wheels from his bike (which was true, but only temporarily). Aghast at such barbaric treatment, Davidâ€™s friend rushed to teach him to ride his own bike, and offered his own bike as a gift, since I was clearly such an ogre. By the time I heard of it, David had learned to ride a bike without training wheels, and yet another childhood milestone slipped past. 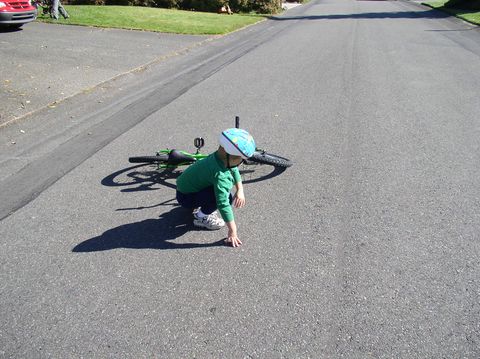 Of course, there is a reason I was reluctant to take off those training wheels …

Over the weekend, David had been angling to celebrate his Special Day with me, since he was next in the rotation. Iâ€™ve been trying to do at least two Special Days a week, so that each child gets about two a month with me. They all keep careful watch of the rotation, and each one knows when he or she is next, often campaigning for their turn before the previous childâ€™s day is even completed. Mondays, Tuesdays and Thursdays are the most likely days, but some have snuck theirs in on Fridays or even Saturdays. There is nothing quite so tenacious as a child who is next in line for a Special Day â€“ I guess I should be flattered that they want to spend time with me.

I staunchly refused to celebrate Davidâ€™s day with him until we returned home from the Duckabush (it was, after all, my birthday) and so he immediately collared me when I arrived home from work on Tuesday. The kids were out riding their bikes, and there was Davidâ€™s little bike with its Training Wheels, now anathema to a boy (practically grown up) with the heady skill of riding a â€˜realâ€™ bike.

We asked David to demonstrate his newfound ability on Rachelâ€™s bike, with the seat lowered all the way down â€“ sure enough, he could ride it! We toyed with the idea of bumping Rachel up to another bike and giving hers to David, until I saw the worried look on his face. â€œItâ€™s a girlâ€™s bike,â€ he confided to me. Enough said. 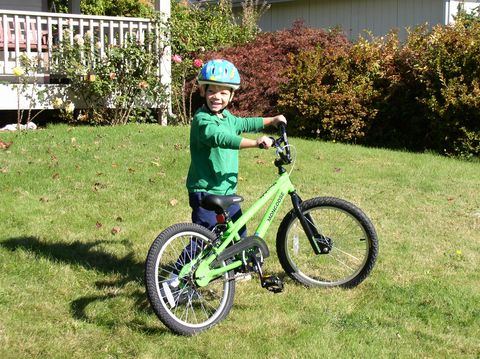 This is not a girl’s bike.

Kathy and I quietly conferred, and agreed that he could no longer be expected to ride the little 12â€ bike with the training wheels. I jumped in the car and we headed off to the store, not telling David anything about our errand. At one point I asked him if he knew where we were going for his special day â€“ â€œSure!â€ he replied. â€œWeâ€™re going to the dentist!â€ I nearly had to stop the car, we both giggled so hard. He can be a very silly boy, sometimes.

We arrived at Target and I made a big show of being there to buy a shirt for myself, but we soon found ourselves in the bike section. We found two possible candidates: one, a basic (red) bike for $35, and another, more elaborate (blue) model for $80. I got them both down, and he tried them out. At some point I must have told him how much they cost — the next thing I knew, he had latched onto the cheaper bike. Personally, I was pushing for the bike with more features â€“ I liked the way the height of the seat could be adjusted without requiring tools. I asked him which one he wanted, and he cheerfully replied, â€œI like the red one, because I donâ€™t want to spend all your money.â€ My heart immediately melted, and I wanted to buy him the most expensive bike in the store, which may have been his plan â€“ he is a clever rascal.

As it turned out, neither bike seat could be adjusted low enough for our taste, and so we determined to find a bike somewhere else. We tried K-Mart (where a foolhardy clerk tried to sell us on a 16â€ bike with training wheels, much to Davidâ€™s disgust) and eventually found a suitable (green) bike at Fred Myers. Returning home as the last light of the day faded, we rushed to try out the bike â€“ sure enough, David was able to get it going without help from anyone. It is tricky for him to get on and off it, and it is hard for him to wheel it about (it weighs almost as much as he does) but I think he really likes it and it has room for him to grow into. On the way home, with the bike safely in the trunk, David said to me, â€œThank you for buying me this great bike, Daddy.â€ When I commented on how pleased I was that he didnâ€™t want to spend all my money, he said, â€œWhen people give me something, I try to be respeckful.â€ It is nice to see that he is taking to heart some of the things we are trying to teach him. He must have thanked me eight or ten more times, over the course of the next several days, which I found very satisfactory. 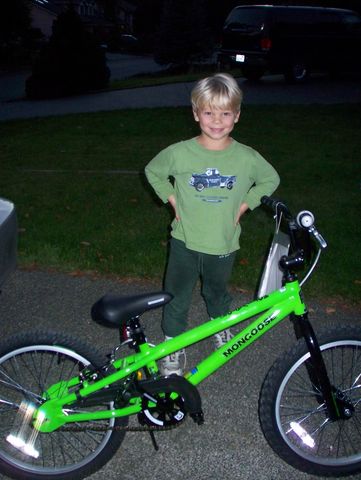 David’s new bike, fresh out of the trunk.

Hebrews 5:12-13: Anyone who lives on milk, being still an infant, is not acquainted with the teaching about righteousness. But solid food is for the mature, who by constant use have trained themselves to distinguish good from evil.

Thinking about training wheels as a metaphor for spiritual growth, it occurs to me that David is growing up in more ways than one. As a Dad responsible for his spiritual growth as much (or more) than for his physical growth, I couldnâ€™t be more pleased. 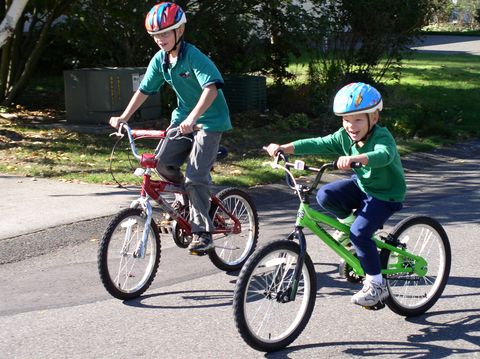 Two of my favorite boys, and their wheels.