Today Joshua and David engaged in a rousing game of paddle ball. I don’t know really what to call it. They used the paddles from the tether ball game and hit a plastic ball back and forth. It looked like great fun. 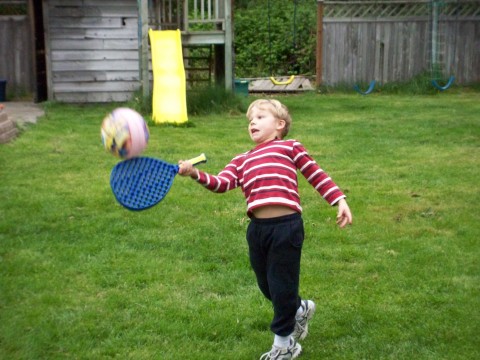 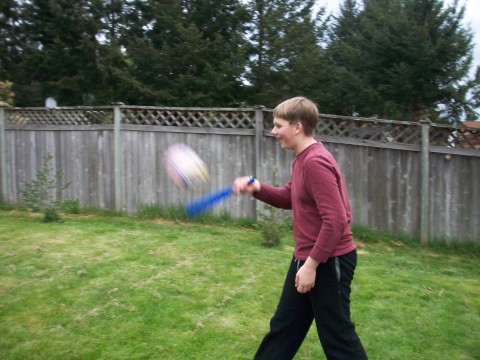 They were having such a great time (evidenced by the loud laughter and general ruckus coming from the back yard) that I had to go out and take some pictures. I quickly realized something was a bit amiss in their game and I took a closer look at the ball. 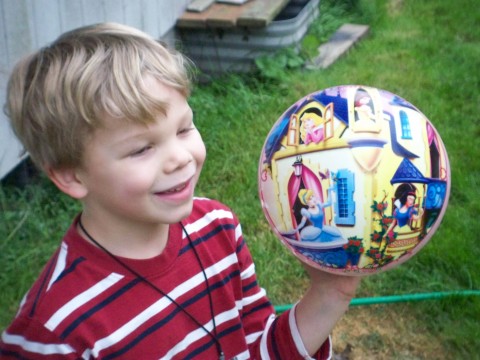 Yes, that’s right. The ball in play was none other than Sarah’s sweet Princess Ball. This leads me to ask several questions:

1. Do the boys have some secret aggression toward Cinderella and her comrades?
2. Were the rest of the balls buried in the depths of the garage and this was the first one they could find?
3. Are they mad at Sarah and trying to take it out on her ball?
4. Is part of the fun seeing how long they can slam the ball before it pops? 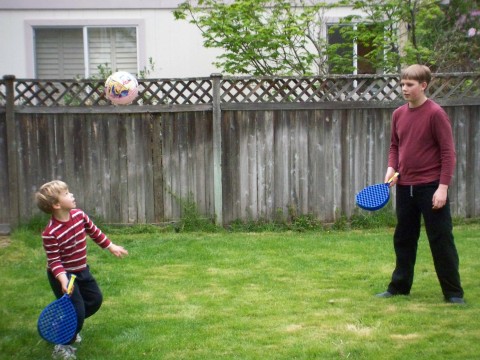 When I started snapping pictures and zooming in on the ball, Joshua quickly chimed in with several amusing blog titles to accompany the pictures. 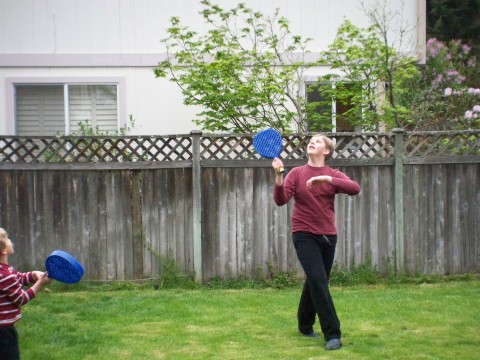 You know you have been blogging a little too long (or obsessively) when you take a picture and your children start writing the blog for you.

A good friend climbs into the swing with you, enjoys the sunshine, and knows how to smile pretty for the camera. 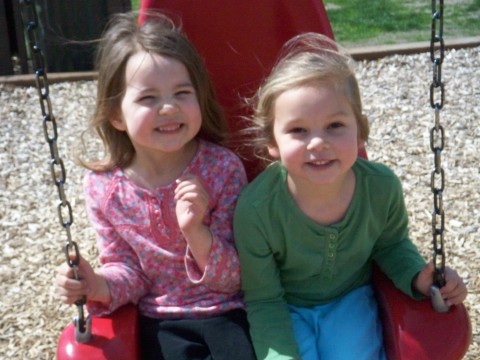 A loyal friend helps you hold on during life’s twists and turns and knows sometimes you need a little extra ‘leg support’ during the bumpy ride. 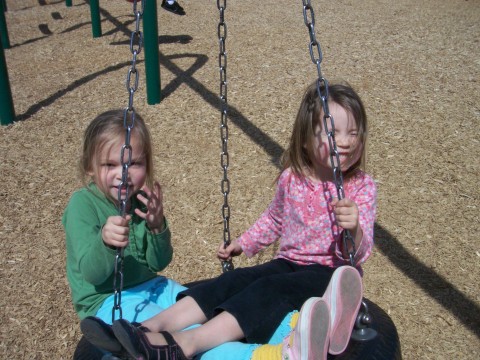 Good friends are there when you need someone to lean on. 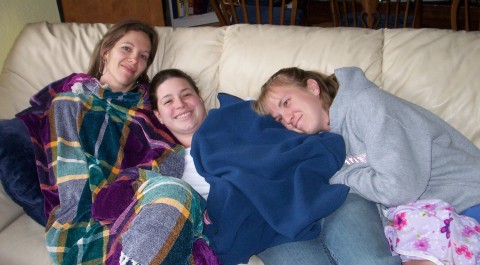 Two are better than one, because they have a good return for their work:

If one falls down, his friend can help him up.
But pity the man who falls and has no one to help him up! Ecclesiastes 4:9-10

Do the Puyallup
WFMW - Diet and Exercise
Sixteen Candles

I do most of my blogging late at night. The kids are in bed, the house is quiet and I have time to think and write. Since we moved the chairs around in the family room my ‘computer chair’ is now Cream Puff (the incredibly comfortable, leather recliner we bought from some friends). If I’m not careful I find myself drifting asleep while sitting at the computer, in the middle of typing. This, my friends, is not good.

There is a phrase for this phenomenon: blog sleeping or maybe even sleep blogging. It’s similar to sleep walking and sleep talking although potentially MUCH more embarrassing. When you walk or talk in your sleep, who sees or hears you? Your family (if they happen to wake). If you’re in college then perhaps the number is greater – roommates or other people in the dorm.

If you sleep blog, however, there is the potential for LOTS of people to witness it (I mean, there are 10′s of people who frequent this blog on a semi-regular basis). Not to mention the fact that the blog would be forever held in the cyber world.

Taking all of this into consideration, although I started a blog last night, loaded pictures, and even tried to be somewhat thoughtful, I couldn’t publish it. I was sleep blogging. I would type some and then recline into the plush depths of Cream Puff and fall asleep. I was afraid that I would wake in the morning, go to read the blog and find that all I had posted was blogging gibberish.

That would certainly elicit a few comments!

So, I had to face Joshua (“No blog this morning, Mom???”) and Tim. They are the early risers in the family and my faithful blog readers. Here’s the e-mail Tim sent me. Sigh.

Imagine my shock when I found no new blog on our website this morning. What could possibly have happened?

Abduction by space aliens?
No, I remember you were in bed when I left.
Power failure?
No, my alarm went off (curse it to the fiery inferno) just as I was getting back to sleep from my allergy attack.
Broke both hands at the wrists?
No, you would have woken me up to take you to the emergency room.

The mind boggles … I’m sure you’ll have a good answer for your outraged readers. 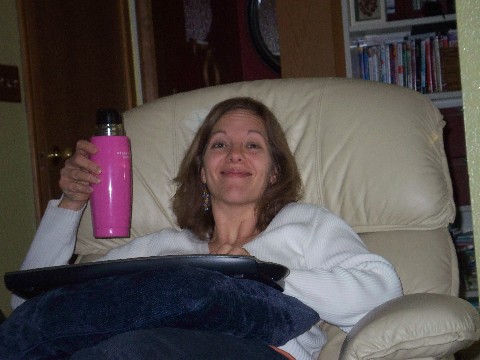 I was obviously missing my coffee last night when I was sleep blogging. A little caffeine can really perk up a blog.

Well, last week was the homeschool co-op play and this week we ended the year of co-op with Friends and Family Night. There were 11 tables set up along the hallways, displaying work the students had completed throughout the semester. 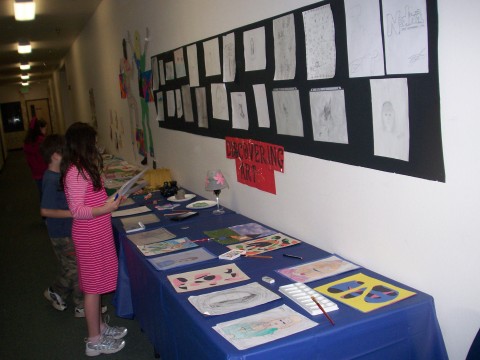 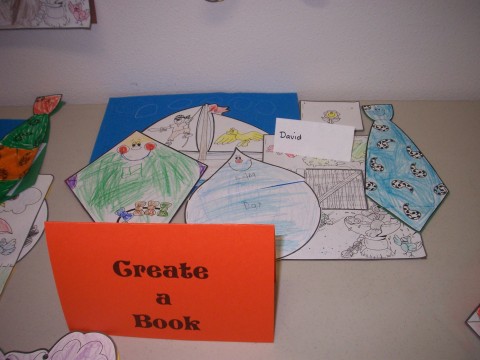 We had our first ever graduation ceremony for two seniors, finishing their high school studies. The kids hugged friends, making plans to visit during the summer. 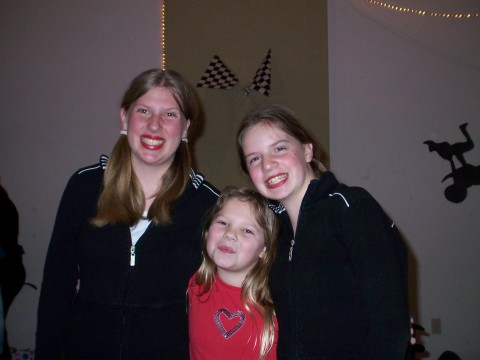 Rachel made some great friends this year!

The moms/teachers high-fived each other, cheering the end of another successful semester. The drill team performed their award winning routine. The 1st-3rd grade puppet class gave us an amazing show to the Veggie Tales song, Where is my Hairbrush (a huge favorite in this household). Finally it was time to take everything down and say goodbye. 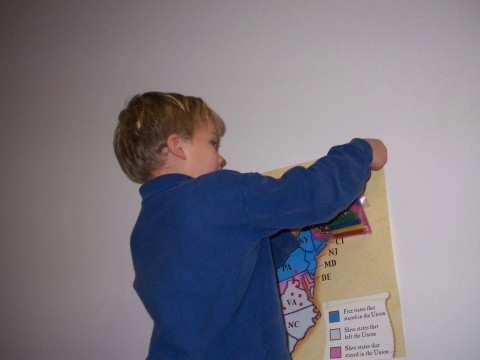 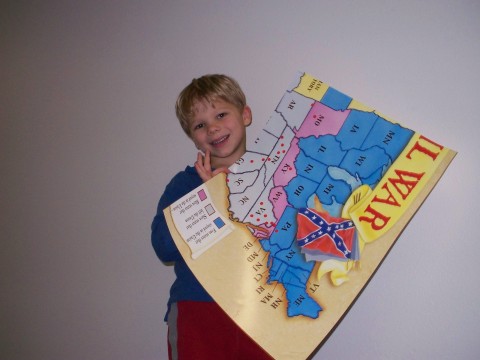 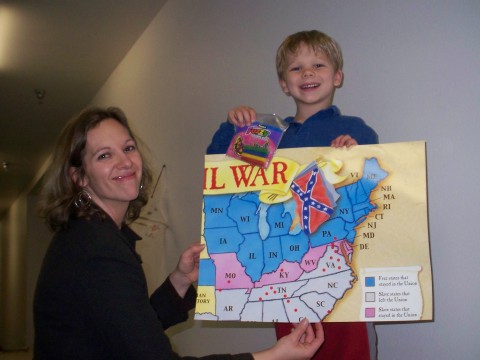 David helped me take down the posters and papers from my Civil War class.

Thank you, board members, teachers, assistants and other hard-working members of the co-op, we appreciate all your devotion and service!! Until next year… 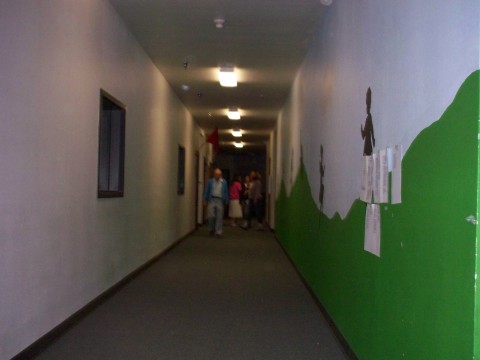 The relentless pace of this Project 365 drives me to take pictures (at least ONE) daily. My children and other fans keep me blogging practically daily. The look Joshua gives me in the morning when he discovers I haven’t blogged (which has only happened ONCE or TWICE since I started) is heart breaking. Okay, it’s amusing and gratifying (keep ‘em hungry I always say) at the same time but serves to keep me on the straight and narrow path of blogging. 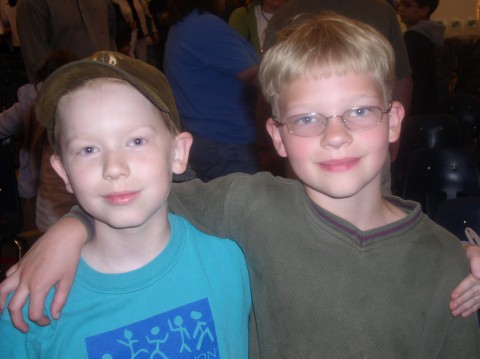 Cousin Samuel and Daniel May 2006

I’m not very good at approaching thing in a balanced manner. The idea that I could take a picture (and therefore still fulfill the basic requirement of the Project 365) and NOT blog on it, is very difficult for me to grasp. Tim tells me I can take a day off from blogging now and then but all I hear is “Wah, wah, wah” like he’s Charlie Brown’s teacher. Of course, I know what’s really going on. He just wants to get me off the blog so HE can do some writing. Some people are so devious they’ll use anything in their power to steal a blog. 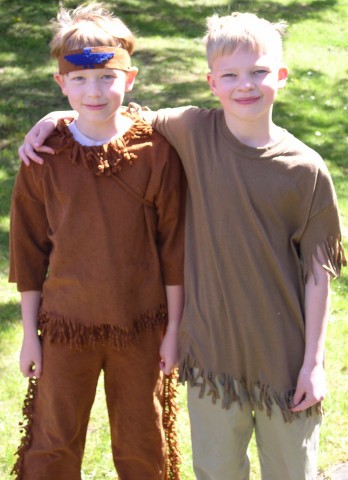 Samuel and Daniel as Indians in the Nisqually Historic Re-enactment, April 2006.

All of this (way too long) is to say I just can’t let Day 106 fall into obscurity. I simply HAVE to blog on it. I took the pictures. I have things to say (I heard that :snort: Tim). Heaven forbid I let there be a lapse in the blogging days.

Whew, it feels good to just get that off my chest. Now I can go on to post a very short blog on Day 106.

Daniel got a package from Norway. Yay! The Cousins live in Norway. 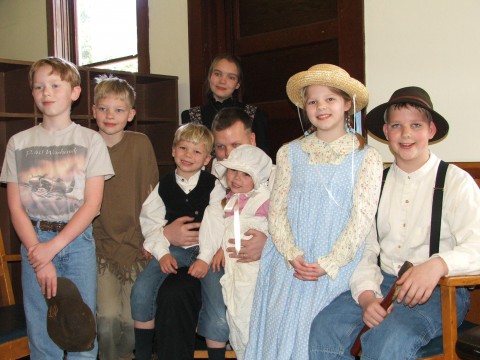 A bunch of Nisqually Missionaries.

The Cousins were here for all the birthdays last year. Samuel and Daniel spent many hours playing together and plotting sleep overs. Only good things come from Norway (in our very limited experience).

As soon as Joshua saw the package he announced, “It’s a yo-yo.” 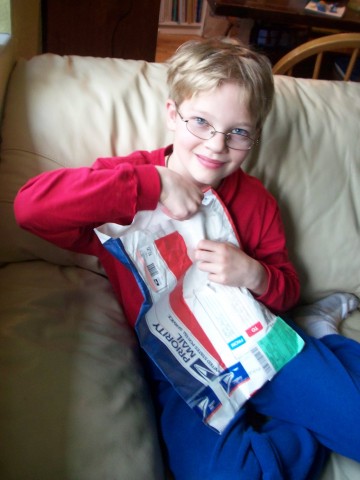 What could it be?

Okay, I have very strict rules in my house about presents. You are not allowed to give away secrets. You are not allowed to feel packages and guess what they are. You are, under no circumstances, allowed to tell the birthday person what someone else got them. This is a line that we DO NOT CROSS. The fact that Joshua would tell Daniel that there was a yo-yo in his Norway package was a serious offense! 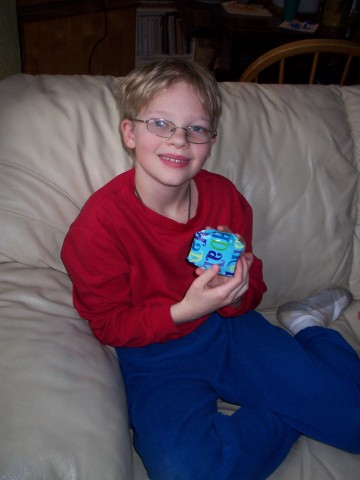 I immediately took Joshua aside for a lecture and possibly some push-ups. Birthdays are sacred events and infringing on gift secrecy is a big deal. From the push-up position Joshua maintained his innocence. “I just guessed. I don’t KNOW what’s in there.” Since Joshua is generally considered a trust-worthy and honest young man, we decided to take him on his word (and let him out of the push-up position).

Imagine our shock when, indeed, Daniel’s package from Norway contained a YO-YO!!!! 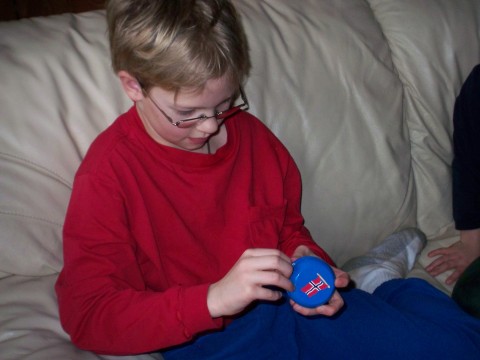 All eyes flew from the yo-yo to Joshua, who immediately burst into laughter. “I didn’t know! I didn’t know!” He protested (between guffaws). “It was just a guess. Really, you have to believe me.” 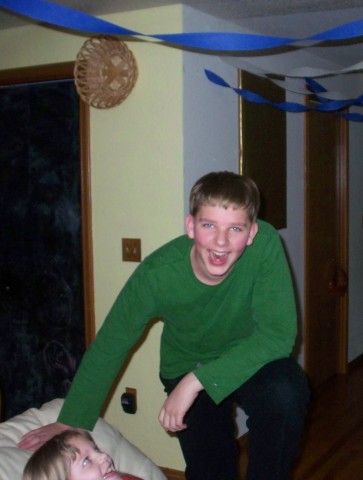 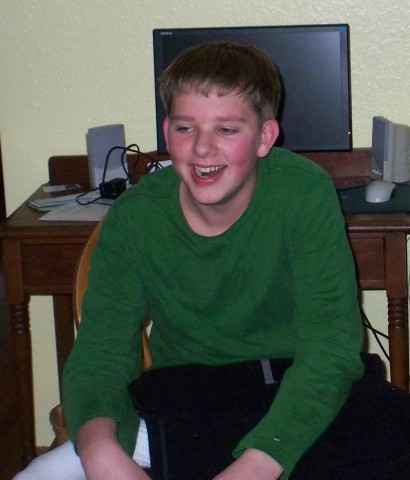 Thankfully Daniel is a kind-hearted boy and doesn’t hold grudges. He forgave Joshua’s indiscretion, whether it was real or accidental, and went straight-away to try out his new yo-yo. The rest of us, however, are still a bit miffed. I shudder to think what The Cousins are going to do once they read this blog. It’s a good thing Joshua’s birthday isn’t until October, he has plenty of time to redeem himself. I can just imagine what kind of package Joshua COULD receive (those Vikings were some intense warriors).