Rachel is a very passionate and emphatic person, with a very strong personality. It comes as no surprise to anyone who knows her now, that she was a remarkable little girl.

As a baby, she delighted her parents by sleeping through the night when she was only six or eight weeks old, and (once she graduated out of the cradle and bassinet) she quickly fell in love with her crib. When she would wake up (in the morning, or after a nap) she would babble or sing happily to herself for at least fifteen or twenty minutes (unlike those somewhat-challenging children who loudly demand to be released immediately upon awakening).

Rachel learned to speak at an early age, and was using complete sentences by the time she was 18 months old. She loved to talk to anyone about anything and everything. By the time she was two, we began to dread picking her up from the church nursery, because of the knowing, amused and sometimes appalled looks we would receive from the volunteer nursery and toddler-room workers. 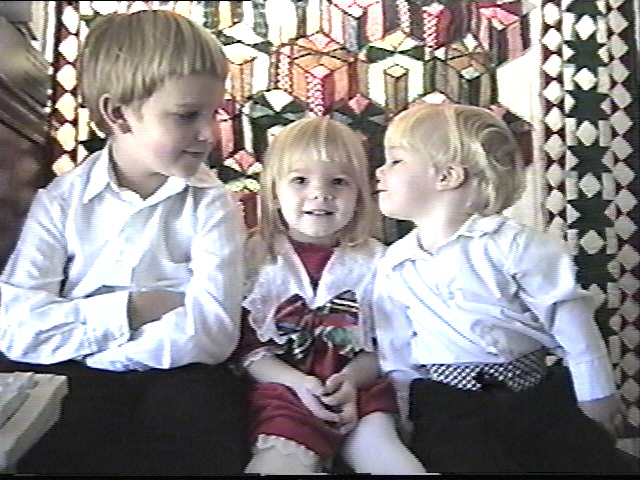 Rachel was usually at the center of the action.

We used to have a small group Bible study meet in our home, and Rachel would usually spend the evening, playing with her older brother in his room. One night, we were gathered around the table with several other couples in the middle of a serious discussion, when Rachel suddenly appeared in the dining room. We all turned and stared at the tiny blond figure, wearing a pink nightie.

Rachel’s eyes were wide, as she announced, “I saw a Big Back Bug.” Sometimes, in moments of stress, Rachel forgot to enunciate the letter ‘L’. 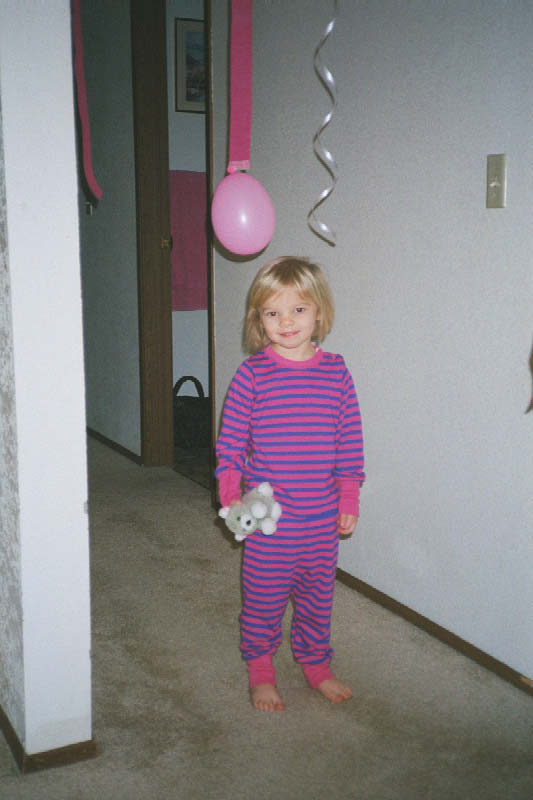 Sometimes she wore these pajamas, instead of a pink nightie.

Rachel: (Insistently, and a touch angrily.) “A Big Back Bug!”

Our guests tried to hide their amusement, and failed. I tried to conciliate her.

Dad: “OK, Rachel, thank you for telling us. We’ll take care of it later.”

Rachel: (Even more outraged.) “No, there’s a Big Back Bug!” She gestured imperiously in the direction of Joshua’s bedroom.

We all trooped off to Joshua’s room, where Rachel pointed indignantly at the offending insect. Sure enough, there was a black bug about a quarter-inch long on the outside of the screen in Joshua’s window. I flicked the screen, and the bug was dismissed. Our guests spent the next half hour taking turns, imitating Rachel’s squeaky outrage.

Whenever there was something that seemed wrong or improper to Rachel’s worldview, she was very offended and upset about it. Where other children might accept such an incident with a certain amount of philosophical equanimity, Rachel took it as a personal affront. 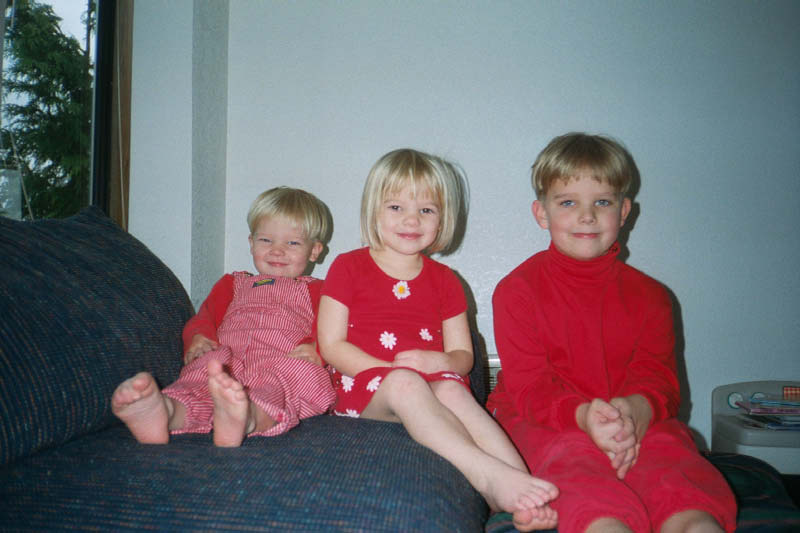 This was sometime around when Rachel turned four.

One day when Rachel was about 3 1/2, she and I were picking blackberries at the edge of our back yard, which backed onto a ravine. Rachel had recently given her heart to Jesus, and she had begun praying about the things that concerned her little heart. Just a few minutes before, she prayed to God to ask Him to protect her from being hurt by the thorns, but despite her best efforts (she always was a very careful child) she was almost immediately pricked by a sharp blackberry briar.

Rachel was very upset, and cried bitterly. “Why didn’t God protect me from the thorns?” she sobbed, more disappointed than angry. Of course, many adults grapple for years with the age-old question, “Why does God allow bad things to happen to His people?”

I was a bit stunned to be having this discussion with a 3-year-old, but I decided to treat the question seriously. I explained to her about how God did not promise to shield us from every bad thing, but that He promised to be with us in everything, and that some things happened as a result of the general sin of man. Thorns, in particular, are a direct result of Adam and Eve’s sin in the garden of Eden, and are a good reminder to us of how serious sin is, in terms of its painful consequences for everyone. I went on at some length, while Rachel sniffled.

Amazingly, Rachel seemed to understand, and was apparently able to process the gist of what I was saying. I later heard her explaining it to Joshua, who listened gravely (does he listen any other way?). He learned early-on, that it was a good idea to listen to Rachel. 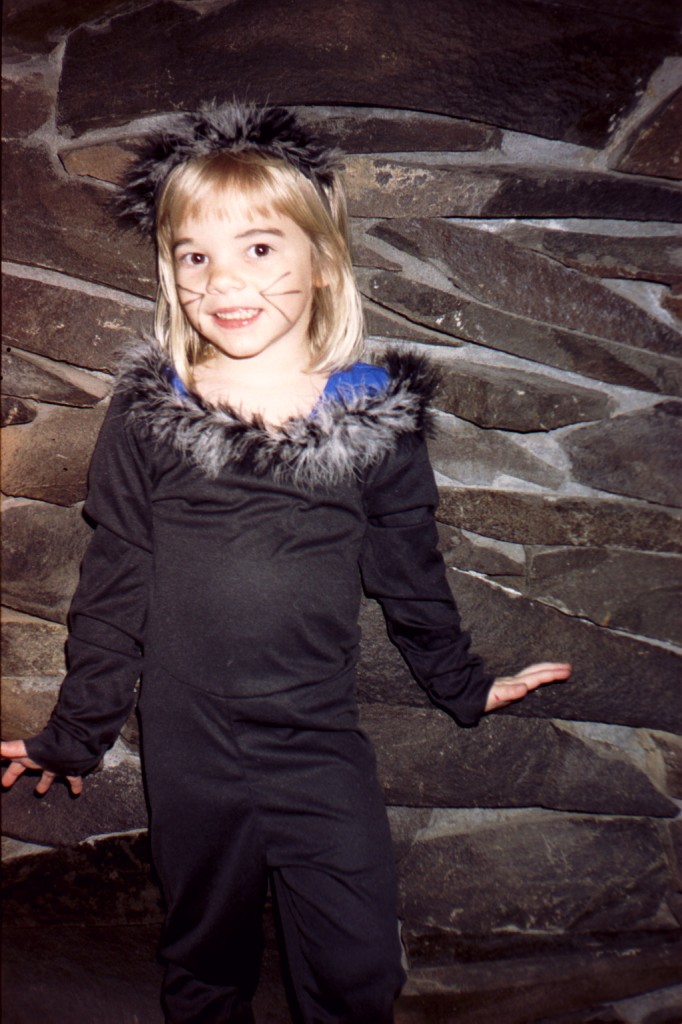 Rachel dressed for Halloween, as a cat (of course).

Well, it was nearly always a good idea to listen to Rachel. One day, not too many months later, Rachel and Joshua were alone in her room, and they got to talking about light bulbs. Noticing her bedside lamp, they speculated at some length about whether the bulb was hot when it was lit, and if so, how quickly (and how hot)? Before Joshua knew quite what had happened, Rachel had persuaded him that it was a good idea to touch the bulb with his finger. Much pain ensued, and bitter were the recriminations, when Joshua recovered from the initial shock and pain. Rachel was dismissive. “You probably shouldn’t have listened to me,” she told him, rather smugly.

Rachel’s younger brother, Daniel, was often the unwilling recipient of her instruction. Always very small of stature, Rachel could lecture with the authority of a seasoned school mistress. Daniel learned to go along with whatever she said, since she could talk circles around him (and pretty much everyone else). One day, when Rachel was not much older than five, she and Daniel were playing in the forest around our home with some of their friends. For some reason, Rachel threw a caterpillar at Daniel, and it broke in half, spilling some of its guts both inside and outside his shirt. The other kids all laughed, which only increased his fury and tears.

“I’m going to tell Mom,” he shouted, and headed for home.

Rachel was very fleet of foot, and managed to run home before Daniel could get there. Calmly, she reported the situation to Mom, in a way that seemed to put Daniel in the wrong, and completely pulling the rug out from under Daniel’s tattling. When Daniel arrived, beside himself with anger, embarrassment and bug-gut revulsion, he found that Mom was less-than-sympathetic to his plight, and Rachel dodged her punishment entirely.

In all this, I paint Rachel as some kind of preschool mastermind, yet she was actually a very kind-hearted, compassionate and loving sister and daughter. Often dressed in rain boots and a colorful raincoat, I used to take her with me whenever I had errands to run, because I enjoyed her company and I got such a favorable response from shop owners and members of the public. Rachel was a delightful ray of cute blond sunshine wherever she went, prattling non-stop all the way. 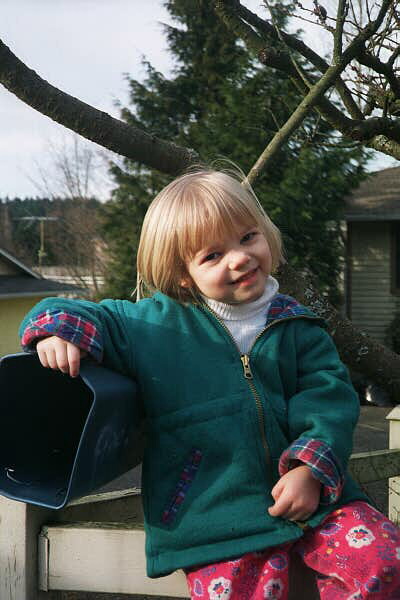 I miss this little cutie.

Now she is off at college in Tennessee, and we miss her greatly. She often calls or writes to us; today, back at school after Fall Break, she fired off an email:.

“I need funny stories about me when I was 3-5 years old,” she told us. It must be for her Psychology class, since I doubt they want that kind of material in Microbiology or Old Testament.

“When do you need them?” we responded.

“Tomorrow. Sorry, I forgot about this assignment,” she texted back.

Ah, the joys of college life. So we racked our brains and came up with this blog post.