Some husbands travel a lot for their jobs – jet-setting about in dark suits for meetings in New York or conferences in Hong Kong. They rack up frequent-flier miles and dine out at upscale restaurants. They speed between airports and high-rise hotels in sleek black livery cars and bring home exotic souvenirs for their children.

Such a life is not for shabbily-dressed computer programmers, apparently.

Programmers spend much of their time slouched in poorly-lit cubicles, squinting irritably or dispassionately at jumbled, scrolling text and numbers on large black screens. From time to time they move the mouse, just to show that they are hard at work.

I was sent on a business trip, once. My destination: beautiful downtown East Alton, Illinois, where I spent a week in a windowless warehouse that had been converted into a data-center. Kathy and I were newly married, so we drove there together (from Connecticut) in our ancient Oldsmobile Cutlass-Ciera. Kathy read, journaled, watched daytime TV, and stared at the walls in our hotel room while I attended exciting presentations with titles like “The Proper Care and Handling of Magnetic Backup Data Tapes”. 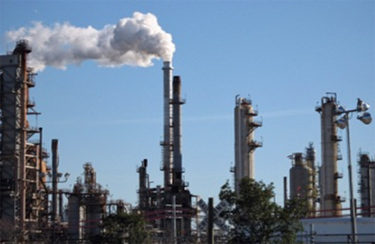 Perhaps it is no surprise that Kathy has done most of the traveling in our marriage. As a homeschooling mom of five children, her schedule has allowed her to take advantage of invitations that others, in lock-step with public or private school schedules, must forgo. I generally encourage her to accept those invitations. After all, that is one of the well-deserved perks of home-schooling, which is not for the faint of heart.

Whenever Kathy goes away, I try to accomplish some secret project, to show her that I love and appreciate her. I am always seeking to dispel her deeply-held conviction that, left to my own devices, I would stay home from work and play computer games the whole time she was gone, eating Little Debby Snack Cakes in my pajamas.

This is simply not true. I don’t even wear pajamas, except at Christmas.

Kathy’s Aunt Stephanie is a retired professor and an accomplished world-traveler, with friends and colleagues scattered willy-nilly across the globe. Some years ago, she began a generous practice of offering a trip to Europe to groups of her grand-nieces and nephews, when they reach their early-to-mid teenage years.

This year was Sarah’s turn, along with three of her cousins – so naturally, Sarah leapt at the chance to spend two weeks touring Italy. As this group of great-nieces range in ages from 11 to 15 (younger than the ones who have gone before), Aunt Stephanie graciously invited the parents to come as well. How could Kathy resist such an amazing opportunity! Dropping the two of them off at the airport, I sped home with plans and schemes of a secret project, dancing in my head. 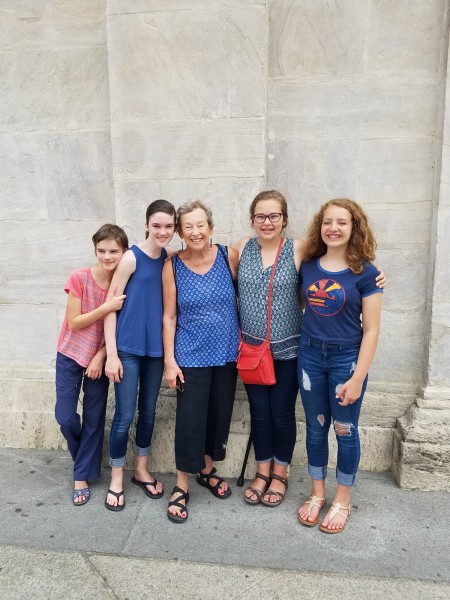 Kathy loves variety. She delights in fresh colors and designs and often coordinates our linens with the seasons. Summers typically include a project of some kind – painting a bedroom, decluttering the garage, etc. She simply cannot abide the idea of leaving her environment unchanged.

For this reason, and because we have 7 people in our family and beds of all shapes and sizes, we have acquired a goodly supply of bed-linens, and storage is always a challenge. We have a large, walk-in closet, but someone has rudely filled it with clothes.

Our bedroom is fairly large, and has a generous, south-facing double window, with a wide window-seat below it. Kathy has often critically eyed that window-seat, lamenting the lack of storage under the bench. “That window seat is just not pulling its weight,” she grumbles.

Stopping off for a quick errand on my way home from the airport, I suddenly realized what I could do to please and amaze my bride.

“Eureka!” I shouted, startling another shopper in the Little Debby Snack Cakes aisle of the grocery store. “I will tear down that useless window seat and replace it with a row of kitchen cabinets! Kathy will have enough storage for all the bed linens, comforters and towels her heart could possibly desire!”

The other shopper smiled nervously and edged away, clutching a package of Nutty Bars.

There was one tiny flaw in this plan: I am in the running for the title as the world’s slowest-working and most incompetent handy man. Home improvement projects involving the proper use of tools and materials are generally at least two trains and a bus ride outside my comfort-zone.

Undaunted by reality or reason, I began by removing the carpet and padding from the top of the existing window seat. I had measured the opening and found that, by some serendipitous miracle, the 9-foot width of the existing window seat would exactly translate into two 18-inch-wide cabinets and two 36-inch-wide cabinets. (This was later amended to 2×18” and 3×24” cabinets, which still happily adds-up to 108 inches.)

Setting my face like tapioca against discouragement or ridicule, I addressed the removal of the window seat. Exerting my sloth-like top speed, I had the plywood top removed in a mere four hours, revealing the attic over the garage and a five-inch recess beneath. 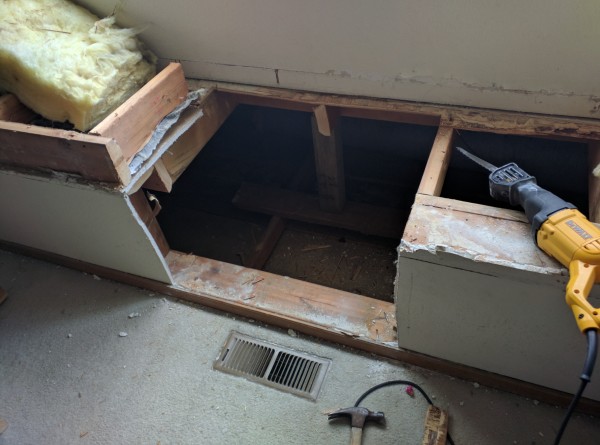 There’s nothing quite like a reciprocating saw, to help you get in over your heard in a project.

I summoned several friends over to advise me, fearing that the removal of the window seat supports would result in the collapse of the wall that holds up the bedroom windows. They came gladly, chortling at my foolishness. “Don’t worry,” they assured me. “We’ll tell Kathy that we told you not to do this.”

There’s only so much chortling a handyman can take, even when he’s desperate for counsel, so I sent them packing and resumed my deconstruction efforts.

And so the project unfolded. Hours passed, in which I grimly studied the problem and considered alternatives. Never before, in the history of home projects, has so much thought produced so little actual work – but somehow, by the end of the second day, I finished removing the old window seat. 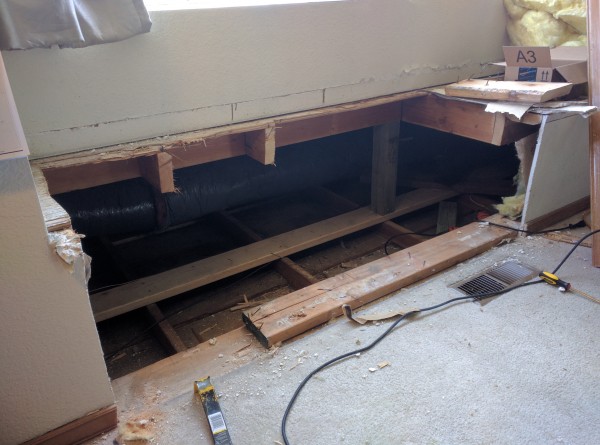 Nearly all of the window seat has now been removed …. but what is supporting the window wall?

I found that the wall under the windows was apparently supported by wishes and prayers (or maybe it hung from the beam above), so I determined to support it with salvaged 4×4 post fragments (remnants of my fallen back fence). 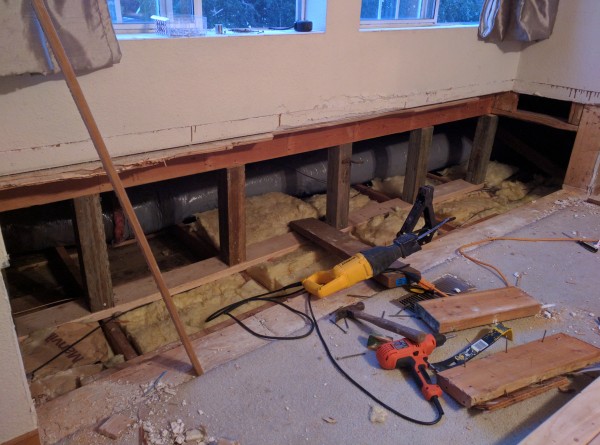 I used the jack from the van to hold up the wall while I worked, and to make sure the 4×4′s fit properly.

Shopping at Home Depot for the third or fourth time, I purchased the cabinets that would fill the space, but found that they would not quite fit into the recess beneath the former window seat. I would need to trim them a bit, which gave me a moment’s pause. 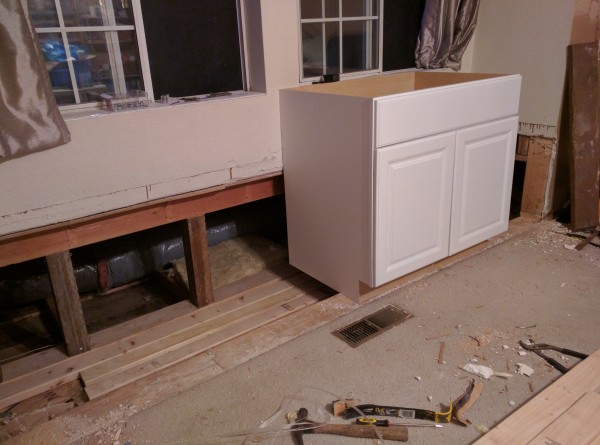 The cabinet looks tall because I haven’t yet cut off the bottom and fit it into the recess of the window seat.

“What we have here, is a sort of a crossing-the-Rubicon moment,” I mused. “Once I cut these cabinets, the good folks at Home Depot will be reluctant to let me return them, if Kathy doesn’t like what I’ve done.”

Over the years, I have come to recognize these critical junctures in time, if only by hindsight. For example, if I had actually attended some of my college classes, I probably wouldn’t have lost my ROTC scholarship. Or if I had made sure the emergency brake was on, before leaving my car on the ferry deck … well, you get my drift. There are often subtle clues.

On the other hand, surprise was a critical aspect of this project. If I consulted Kathy, it would give the whole thing away.

There is just no getting around it – I am getting older. By sheer attrition, I’ve acquired something that could pass for wisdom, at least in poor light. So I texted Kathy. “I need you to call me.”

As it unfolded, she did NOT actually want our bedroom dominated by a bank of large white cabinets, in spite of the sheer, glorious magnitude of storage they would provide. She wanted to keep the window seat, but to have storage under it. When she said, “I wish there was storage under that window seat”, she had apparently NOT meant, “That window seat must be reduced to rubble!”

“Rookie mistake,” my friend Peter told me, when I confessed that I had asked Kathy for her input. And so it seemed to me – back went the cabinets to Home Depot. Now I was faced with the unpleasant prospect of rebuilding the window seat I had so enthusiastically destroyed.

Whenever you do something to please another person, whether it is buying a gift or providing a service, there comes a moment when you have to face the question: “Am I doing this for them, or for me?”

All too often, the answer is that I’m doing it for me.

I managed to persuade Kathy that a discreet (unfinished) cabinet on each end would still allow room for a window seat in the middle, and so I installed the two end-cabinets and began the process of reconstructing the window seat, ably assisted by our two cats, who have probably been sending Kathy regular updates. 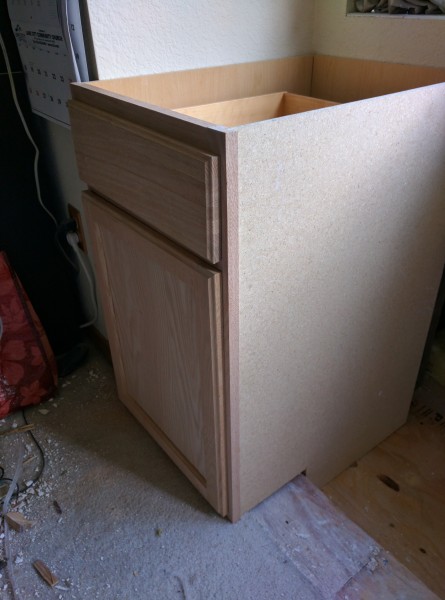 I admit, the unfinished cabinets will probably work a lot better with the overall decor of the bedroom.

Suddenly, I realized that Kathy was coming home on Sunday, and it was already Friday evening. I rushed to complete salvage the project, since I had reduced our bedroom to a handyman’s war zone. 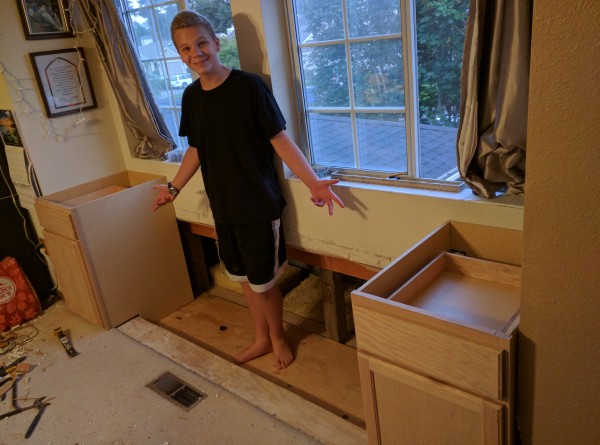 David shows off the two end-cabinets in his inimitable style.

Except I had miscalculated, since I also needed to prepare for Sunday School and finish the Vacation Bible School attendance program that I have been (slowly) building for our church. Let’s just say that Saturday was a long day. I rebuilt the window seat that I had so blithely destroyed, and rushed to make the bedroom habitable. 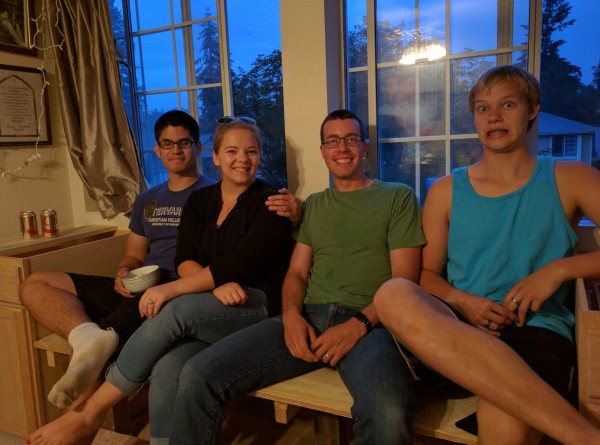 I shang-haied some passing ruffian volunteers to stress-test the seat.

Now all that remains is to make a cushion for the seat, panel the sides of the cabinets, and figure out how to acquire and hang doors on the front of the window seat itself. All in all, I think Kathy was thrilled (even if she wasn’t surprised)

Tune in later (no promises how long it will take) for the final rendition! 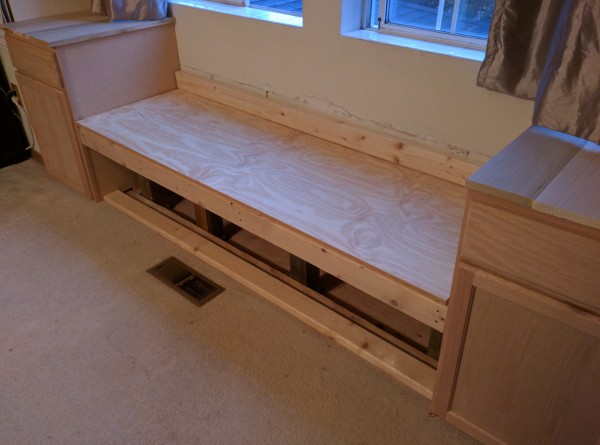