I’m not sure this technically counts as a Works for Me Wednesday post. It’s a trifle long, but very worth reading. I can say that somewhat objectively since I didn’t write it.

A Lord of the Rings Inspired Hike — by Tim

Every three or four years, I like to venture out into the Great Outdoors™, if only to maintain my reputation as a master woodsman.

It seems like only yesterday when I hiked with my two oldest sons (Slug and Weasel) in the beautiful Duckabush valley. Still, my dedication to the sport is such that I rarely let more than a decade go by, without some excursion or other into the hills and forests. Even a man in peak physical condition like myself must take care to maintain his physique. 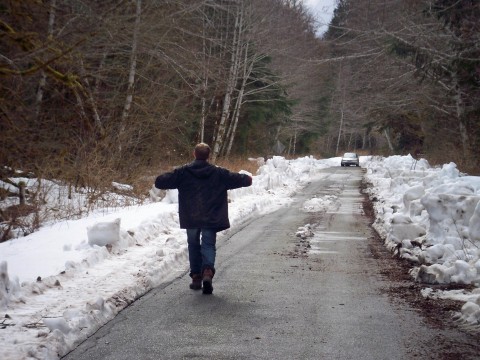 We had to park 1/4 mile from the trailhead, because we forgot to buy a parking pass.

I had occasion recently to spend a weekend with my oldest son, as we carefully navigated the excellent Passport 2 Purity curriculum published by Family Life Today. While that is worthy of some discussion, I’ll write about it some other time. My wife, Latte, is often critical of my long, wandering and pointless blog posts. “The server only has 300 gigabytes of storage, you know,” she fleers. (If there is anything worse than a techno-phobe spouse, it is one that knows just enough to be dangerous. But I digress.)

One part of the weekend that the Family Life people recommend, is to bake in 2-4 hours of time for some kind of fun event, in case the rest of the weekend is miserably uncomfortable. “You want this weekend to be a happy memory,” they sagely advise. I asked my oldest son what he would like to do as a father-and-son activity, giving him several attractive options:

For some reason he didn’t really consider any but the last two (he is, after all, a history buff). Worried that my manly physical prowess might shame him, I tried to steer my son toward the museum. “Tell ya what,” I wheedled. “If you pick the museum, I’ll throw in a large milkshake and a couple of bucks to spend in the souvenir shop.”

Unmoved, he stuck with the hike. “C’mon, Dad,” he scoffed. “It’s only 3 miles to the lake — how hard can it be? Har, har, har.” While he cannot compare to my brother, Torpid, when it comes to sniggering, Slug has a pretty good evil laugh. “Har, har, har,” I agreed, grinding my teeth.

Editor’s Note: My oldest son has decreed that he doesn’t like being called ‘Slug’ anymore. As a mature father, not desiring to exasperate my son, I’ve reluctantly agreed. In honor of his recent obsession with Tolkien’s work, I’ll bestow upon him the moniker, “Faramir”, although I can’t say I really like being Denethor, even by implication. Denethor was a lot dumber than I ever aspire to be.

Naturally, the forecast for the weekend was rain, sleet, wet fog, showers, drizzles, and a bit more rain. Undeterred, Faramir and I laced up our boots and set forth into the trackless waste. 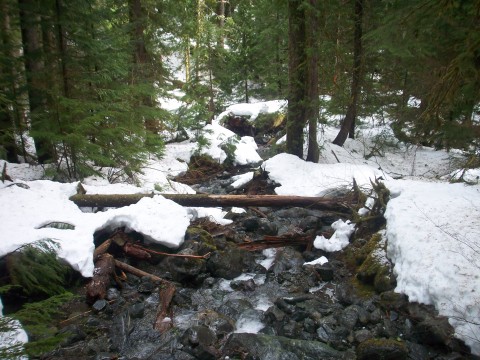 “Ummmm, there sure are a lot of tracks, signs, and candy wrappers in this ‘trackless waste‘”, quipped Faramir, pointing at the large informational kiosk and the well-defined trailhead. My oldest son never has been very sophisticated when it comes to writing (or even living) heroic literature.

“Who’s going to read a story about two bold heroes if they stick to well-marked trails all the time,” I challenged. “‘What a bunch of sissies,’ they’ll conclude, dismissively. No, for proper epic narrative, it’s trackless wastes or nothing.” But there was no use explaining that to an unlettered man of the forest like Faramir.

I let my son lead the way so that he could set the pace, not desiring to leave him behind in the murky forest as I effortlessly bounded up the mountain. Realizing that he would feel pressured to overextend his strides if I followed behind him too closely, I dropped back a bit. “Say, Dad,” my son shouted from three switchbacks above me. “Do you think you’ll be coming along, soon? It’s starting to get dark, Har, har, har!”

He’s a hoot, that boy Faramir. Some time later we found a bridge, and re-enacted the famous scene between Gandalf and the Balrog, in the mines of Moria. “YOU … SHALL … NOT … PASS!” Intoned the wanna-be Gandalf. “I don’t want to pass,” I muttered, under my breath. “I want to go back to the car.” I reflected on the foolishness of Balrogs, which cheered me up considerably. 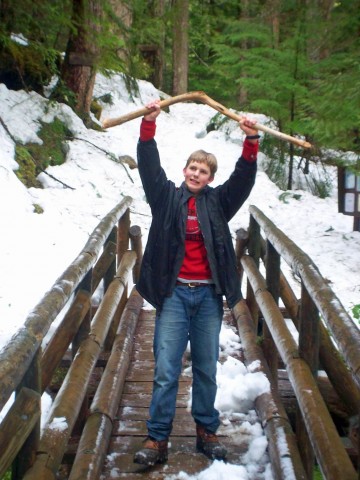 It turns out, the whole bridge conflict in the Mines of Moria was the result of an innocent misunderstanding.

After trudging at least six or seven miles, much of it bordering on vertical, we encountered another hiker heading down the trail. “How … much … farther,” I gasped. He looked at me in some concern, and then at the nearly flat trail segment I had just traversed. “Not much more than another mile,” he assured me, heartily, with an encouraging smile. His guileless visage radiated integrity and goodwill, so I recognized him immediately as an agent of a dark power.

It is a little-known fact that the Forest Service hires spiteful, ill-intentioned men and stations them on trails all around the nation to spread false hope and to prey upon unsuspecting travelers. Once when particularly enraged, I managed to wrestle one of them to the ground, and, breaking a few of his fingers in the process, snatched a fragment of his guidebook:

“You must always work to lure the unsuspecting hiker deeper into the forest, with optimistic promises that their destination is ‘just over the next rise’ or ‘just around the next bend’. Work to communicate a sense of hearty cheer and use vague measurements of time and distance wherever possible. Freely use your imagination to extoll the beauty and majesty of the destination, especially since it is unlikely the hiker will ever actually find it. Be careful not to …

Unfortunately, the fragment was torn at that point, and the Forest Service operative had already made his escape. I have often wondered what it was, that they were supposed to be careful not to do?

Not more than five miles later, we encountered another troll bridge, where Joshua amused himself playing Gandalf again. “How come I always have to be the Balrog,” I whined, somewhat out of character. It didn’t seem fair that he had a stick, but my whip had to be virtual. 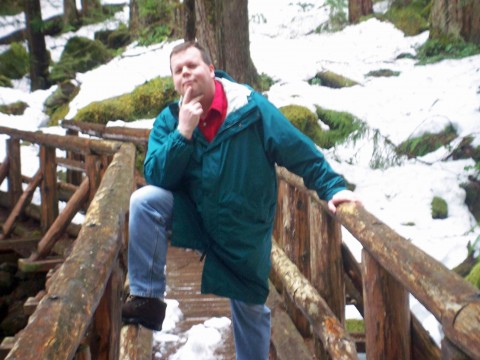 In spite of prejudice, some Balrogs are actually very mild-mannered and thoughtful.

Soon the trail was covered in snow, as we persisted in our hopeless quest for the lake. Various fallen trees and the corpses of earlier hikers littered the path. (Well, OK, I’m exaggerating about the corpses.) The rain settled in happily, and our spirits were low. Suddenly, we noticed what seemed to be a large open field, off to the right. “It’s the lake,” we shouted gleefully.

Eventually the trail wound down to the surface of the lake, which was mostly frozen over. “Go on across,” I urged Faramir, trying to radiate integrity and goodwill.

Quite a bit smarter than you would expect a Ranger of Ithilien to be, my son declined the opportunity. “No, I would not dream of showing you such disrespect by taking the lead. Yours is the place of honor and of command, Oh My Father.” We tussled a bit on the edge of the lake, trying to throw one another in, before a fragile truce was established. 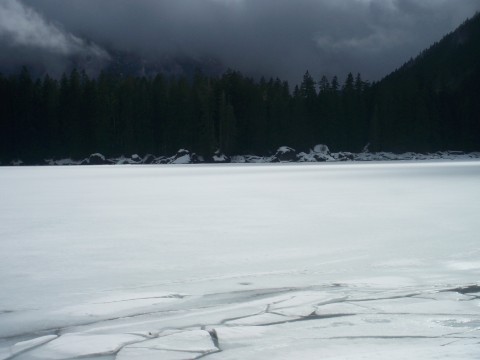 A dark and foreboding lake in Mordor, where the shadows lie.

We sat for a moment at the shore of the lake, drinking in the stark beauty of the scene, still gripped tightly in the claws of winter, despite the warm winds of Spring.

“Yep. We came to see a lake, and of all the lakes I’ve seen, that’s one of ‘em.” Faramir rose and stomped his boots in the snow.

Some men seek to extract every possible benefit from the Journey of Life, savoring each moment and appreciating the beauty that surrounds them. Of such cloth, my son and I are not made. Ours is a simple existence of tasks and objectives, which we neatly check off so that we can move on to the next one. We climbed this mountain to see a lake, and we saw it. Next objective: get back to the car so we can enjoy our root beer. 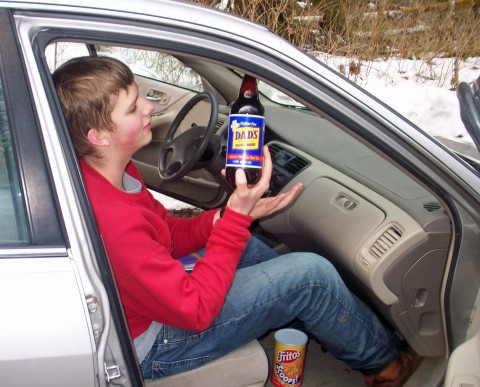 On the way home, we passed a group of hopeful hikers, bravely trudging up the hill. “Not much more than another mile,” we assured them heartily, radiating integrity and goodwill.

8 thoughts on “Travels with Faramir”