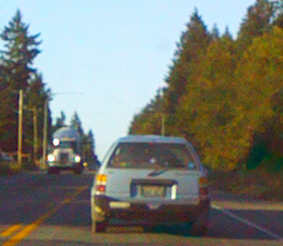 This morning as I turned onto 104 toward the Hood Canal Bridge, I found myself behind a little station wagon with a number of stickers on its back. Most prominent was a “Peace” symbol, centered in the rear window. Next I saw a “Honor Mother Earth” bumper sticker, written in flowery script. A multicolored “Positive” window cling decorated the bottom left of the dusty Corolla rear window.

(This is the car — you’ll have to take my word for it with respect to the stickers.)

But one thing caught my attention and (I must admit) irked me: centered on the bumper was a black sticker with these words emblazoned in white:

Apart from grammatic issues (I should be among the last to throw stones), I am always amused (and a little saddened) by the anti-war rhetoric I see and hear around me. It ranges from a naï¶¥ “Peace” mentality to a frothing hatred of all things military; for such minds, all war is automatically evil. Somehow the need to critically think and evaluate has seemingly been short-circuited in the pursuit of saccharin political-correctness.

What kind of war would such a person believe is justified? The driver of the little car was a small woman in her late 30′s, thin and pinched with her hair tied back in some kind of a ponytail; “Granola” was the word that came to my mind when I saw her. How would she respond, I wondered, if enemy troops were quartered on Port Townsend? If she was conscripted into unpaid laundry-duty washing foreign uniforms and her little Corolla was confiscated, would her “Peace”-loving philosophy go with it?

In much of the world, individual freedom is severely restricted. People live under appalling conditions with little hope for the future. The fear of arrest and imprisonment or death aprart from justice looms over a majority of the world’s population in a way that is very foreign to North American experience. In a country that stands as a rare exception to this global rule, it is bitterly ironic that many of our citizens appear to despise the shield that preserves the (rapidly diminishing) individual freedom and justice we retain.

I work in a city that is known for its liberal tendencies, for a company that is characterized by leftist politics. In the elevator of my building there are whiteboards, where people tend to express themselves in various ways, silly and serious. Yesterday someone wrote, “War is … ” on the whiteboard, below which someone else had added, “OIL”.

I’m not a political analyst, and I actually failed the 300-level Macroeconomics course I took in college. (This event, among others, precipitated my decision to major in Computer Science instead of Economics). I do not dismiss the extent of our nation’s dependency on oil and our strong motivation to ensure a reliable flow of that substance, particularly after Clinton’s liquidation of much of the oil reserve. But it doesn’t take a rocket scientist to look at gas prices at the pump before and after the war against Iraq … if we waged that war for oil, there sure doesn’t seem to be an immediate payoff!

This is the cheapest gas price I have found in more than a month!

On the way home yesterday I passed a convoy of military vehicles. I thought of the hundreds of thousands of Americans who have laid down their lives (in some cases, not to take them up again) to prosecute a war against thugs and criminals of the worst sort. 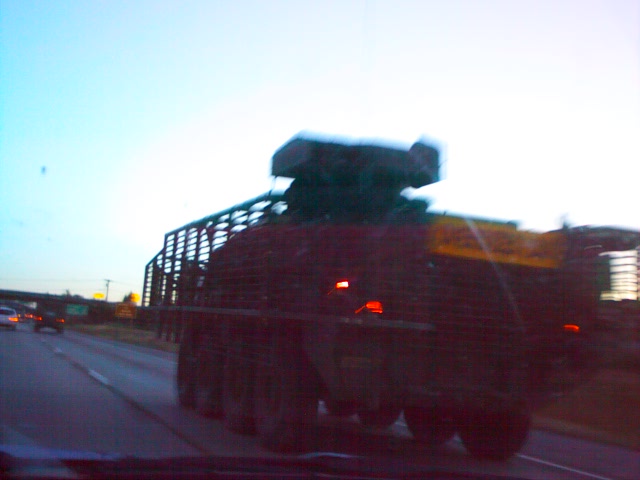 The granola woman and her friends would probably have us leave the Iraqi people to themselves and turn a blind eye to injustice and oppression throughout the world. But there is more to morality than being ‘nice’. Sometimes, if you care about your fellow man at all, you must take action to protect other people. It is certainly true that no country, however well-intentioned, can be entirely trusted to interfere in the affairs of other nations. But if we will not intervene, who will? Who can be trusted to help the people of Iraq build a government that will not betray them into slavery again? Certainly not the French or the Germans, whose foreign policy seems crassly profit-driven.

As you approach the Hood Canal bridge from the west, there is a long hill with a 40 mph speed zone at the bottom. Shifting from 60 to 40 is hard enough in normal conditions … it is particularly difficult down such a sharp hill. The police, well aware of this tendency, set up one of those radar signs that tell you how fast you are going. When Granola-Corolla-girl saw the sign, she slammed on the brakes and dropped to 31 mph, as did I, necessarily. I wonder if she chooses her philosophy the same way she drives … without much foresight and prone to overreaction. I can only imagine the thought-process goes something like this:

1) War is bad; I know this from watching TV … look at all those people being shot and killed!
2) We must outlaw all war!
3) I will put stickers on my car until everyone can just be nice to each other!

Pacifism is not a comfortable position. I have some respect for someone who has thought through the ramifications of such an orientation. A true pacifist must be prepared to suffer and die (often quickly and in large numbers) to enact any change in the way the world is run. Against a sufficiently evil and ruthless enemy (like, say, Al-qaeda), pacifism is helpless and useless. Such enemies will respond only to deadly force … and people with the moral courage to apply it are necessary to defend and promote internationally the freedoms which we love and enjoy.

But perhaps I misrepresent the pacifist position. It has been 15 years since I studied “Warfare and Ethics” under Hans Tiefel at the College of William & Mary. So I broke out some of my old ethics texts and reviewed some of the literature. It turns out that there are four classifications of pacifists, at least according to Douglas P. Lackey in “The Ethics of War and Peace”:

Most of these philosophical positions are fraught with logical inconsistency or fail to be useful in the real world. As a Christian, I look to the Bible for meta-ethical and ethical guidance … it is difficult to reconcile extreme pacifism with the collective thrust of scriptural teachings. While the Bible certainly stresses the value that God places on life, there are a number of examples of violence sanctioned and in some cases commanded by God.

Many Christians turn to the collection of ideas known as “Just War Theory” for insight into the cases where war is morally permissible (or even morally obligatory). So let’s review the basic tenets of that theory, as originally described by Aristotle and refined by Augustine and Aquinas:

A nation must only embark on a war in a just manner … jus ad bellum. A prospective war must meet the following criteria:

War must be waged in a just manner … jus in bello

And of course, a war must have a certain result, in order to be considered “just” in hindsight:

So we must consider the existing war against Iraq, (or perhaps more accurately, the war against terrorist forces using Iraq as their base). As far as I can see, the preconditions of jus ad bellum are satisfied … our Commander-in-Chief constitutes Competent Authority. We are clearly using considerable restraint in contolling the use of force to achieve a political result; that is, the establishment of a representative government in Iraq and the elimination of a overtly hostile enemy. Our nation seems determined to wage this war for a Right Intention, that is, to relieve the oppression of the Iraqi people and establish liberty and justice in some recognizable form in that country. In spite of the daily attrition of our soldiers, our soldiers seem to maintain a love and compassion for the Iraqi people. There is evident Just Cause to wage this war … Iraq’s initial attack against our ally Kuwait should not be forgotten in light of Saddam Hussein’s failure to live up to the treaty that was signed at the “conclusion” of that first “Gulf War”. The former Iraqi government’s open subsidy of terrorist attacks against Israel also seems to qualify as aggression against an ally. But perhaps most of all, we are in Iraq because of the plight of the Iraqi people, some of whom were brutally gassed by their own government. The superior technology and military capacity that our nation enjoys have allowed us to wage this war with an expectation of favorable Proportionality in terms of the good that is done for millions at the cost of a few thousand lives. While I do not attempt to diminish the sacrifice of our soldiers, this war has produced an astonishly small number of casualties, when considering the “butcher’s bill” of other past wars. Our casualties in the entire war so far have been less than in most single battles of the Civil War, for example.

The war seems to be waged in a just manner, as well. Our commanders seem to constantly satisfy the requirements of Necessity, Proportionality and Discrimination in their attempts to bring the war to enemy combatants while preserving civilian life. The restraint and courage of our soldiers is remarkable, particularly considering the cowardly terrorist tactics of our enemy, which are calculated to provoke a response that is not Necessary, not Proportionate, and non-Discriminatory. The recent beheading of a civilian contractor is a fairly typical example of such tactics.

Recent abuses in the handling of prisoners has highlighted the need for close attention in the management of such a war (jus in bello) … but does not justify the abandonment of this war, as some would urge. Our nation has a brief opportunity to establish freedom in an unlikely spot; we should grab such chances with both hands and hold on tightly.

The First Flower of 2004
Family Photo
Freedom from Religion