It is a crisp Fall morning, dawning clear and golden on the slopes of Mount Rainier to the southeast, as I ride above Tacoma’s waterfront on the elevated Sounder train to Seattle. Even the Tacoma Box Company building (established 1889) looks elegant in the fresh sunshine of this day. Yet my appreciation of the beauty of this glorious morning is somewhat dimmed by the lack of Pop Tarts.

Under ordinary circumstances this would never have happened. I take prodigious care to ensure the regular provision of Pop Tarts in my little bronze car, the only place where they are (relatively) safe from the ravages of Slug, Weasel and other natural predators. Ever since the catastrophic mouse nibbling incident, I secure them in a clear Rubbermaid container with a MouseAway™ lid. While I have come to prefer the bland reassurance of Brown Sugar & Cinnamon, I am known for my ability to lay aside large quantities of Blueberry, and even Chocolate Chip Cookie Dough, Pop Tarts.

Joshua put together four bookcases for a pint of Ben & Jerry’s. He has been the envy of all, as he generously shares out his treat, one half-spoonful at a time.

Imagine my shock, dismay, surprise and chagrin when I looked on the back seat of my car and found no faithful plastic bin, no preservative-laced pastries, no breakfast. In the chaos of our recent move to Lakewood, the bin was removed and the pastries likely devoured by some undeserving wretch. And so I must ride without Pop Tarts, woe is me.

One of the reasons I began this blog (apart from the fact that I thought it was a cool idea and it gives me an unparalleled chance to blather on without being interrupted) was that I had begun to feel my mortality. These kind of things occur to me later than for most people; it has only recently begun to dawn on me that I am the father of five children and should (at least occasionally) act like a grownup. It seemed to me that, in the event something happened to me, it would be pleasant to have written down a few thoughts by which my children could remember me, if they were so inclined. As my body continues to age (I am, after all, approaching 39, which is merely a pebble’s toss from the dotage of 40) my thoughts have been more and more fixed on the temporary nature of my sojourn on this planet.

This was not a ‘posed’ picture — Sarah set this up herself, with no prompting!

It was, therefore, with startling joy this past Saturday, that I remembered a key truth: I am an immortal. I have read many stories (usually fantasy or science fiction) about people who are, for various reasons, immortal. Traditionally, these characters are flawed; often storybook immortals are wearied by their years and jaded by the sameness of life’s pleasures. Many of them have experienced the personal tragedy of watching a beloved one die of old age or other mishap, and are often detached from the world and unconcerned (at least on the surface) with the plight of mortal man. In some cases, they have been disappointed or betrayed so often that they have little or no desire to continue to live. Typical handling of such characters in fiction involves the poignant renunciation of deathlessness in exchange for True Love of some other lofty ideal.

In the beginning, many of the early patriarchs lived for nearly a thousand years, according to the records in the book of Genesis. Many have speculated about these long-lived men, wondering why mankind is now limited to such a comparatively low average of 70 years. Of course, the reason is recorded in Genesis 6:3, as God speaks about His intention to destroy the earth with a flood:

“Then the Lord said, my Spirit will not contend with man forever, for he is mortal; his days will be a hundred and twenty years.”

The generations began to shorten after Noah, who reached the respectable age of 950. Noah’s descendants lived 600, 438, 433, 464, 239, 230, 148, and 205 years, down to Abraham, who lived to be 175. Some argue that the change in the Earth’s atmosphere after the flood and the resulting increased solar radiation is to blame for aging. Others have pointed at the relentless and cumulative impact of sin as the cause for shortened lifespan. Whatever the reason, it is a rare person these days who lives to be more than 100, let alone 120.

When I was in high school or college I saw a movie about a bunch of Immortals who (for reasons that were never clear to me) could only be killed by chopping off their heads, usually after a dramatic sword fight and the exchange of stilted insults. The plot (if you can call it that) required a small group of these sword-wielding maniacs to chase one another around the planet with the brutal goal of absorbing each others’ life energy or something (I was never clear on that part, either) and ultimately becoming some sort of god. It seemed to me that the only thing they were likely to accrue was high dry-cleaning bills, but, hey, I didn’t write the screenplay.

That’s not my kind of immortal. Any who saw me swing a sword would know that the only likely impending decapitation would be my own. Actually, I possess a much better grade of immortality … the kind that cannot be ended by the chop of a blade, poisoned by despair or cheapened by ennui. By the word of the Lord, who does not lie, I am guaranteed eternal life. By faith in Jesus Christ, and according to His grace and mercy, I will live with Him forever. Not some measly 50,000 years, but forever. No end. Ever. It sends a chill down my spine when I think about the amazing infinite nature of this gift of God. 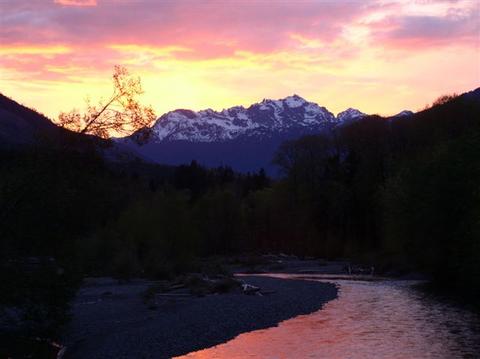 I have been doing a lot of thinking about time, and readjusting my reaction to the ‘waste’ of ‘my’ time. One recent Saturday, I drove downtown to pick up a rental truck, only to discover that I had reserved the wrong vehicle (actually a cargo van) and that my plans to move would have to be delayed. Driving back to Lakewood, a cheerful peace descended upon me as I remembered that I have (literally) all the time in the world and that it didn’t really matter what I did with today or tomorrow, as long as I gave glory to God and enjoyed Him. I started to sing along with the praise songs on the radio and adjusted my plans to move our furniture on Monday, instead of Saturday.

It seems a little childish, almost, but I get a lot of glee out of the fact that I don’t really have to worry about anything. As Jesus said, in Matthew 6:25:

One of the nice features of our new rental house is a hot tub, nestled into a corner of the deck behind the garage. Although it is in view of the neighboring house, the room that overlooks it is tenanted by a four-year-old, who waves at us cheerfully when we use the tub in the daytime. Mostly we hit the hot tub just before bedtime, enjoying the cool breeze above the water and the stars overhead. It has been a real blessing throughout the move, refreshing our aching muscles after a long day of hauling boxes. There’s nothing like a hot tub to help you to forget your cares and worries, and to reflect on God’s gracious provision throughout the day.

Now that the weekend has passed, today I have to work. I’m sure there will be many worrisome details that will require my urgent attention. But I must admit I’m not really very uptight about it … after all, I’m an immortal.