I was reading recently in II Kings, chapter 4, which tells of two women of faith in the time of Elisha, the great prophet and successor of Elijah. The first story deals with a woman whose husband has died, and a creditor who intends to seize her children as slaves in payment for debts owed. Elisha’s solution seems strange to me … he instructs the woman to gather jars from all her neighbors to fill with oil from a single jar which miraculously doesn’t run out until the last jar is filled. She obeys, and sells the oil to pay her husband’s debts, saving her two boys from slavery.

Two of the women of faith in my life: my Sweetie and her Mom

Elisha could have rebuked the creditor in the name of the Lord. Considering the recent bear-mauling of those who disrespected this particular prophet, I’m sure the creditor would have happily forgiven the debt rather than face God’s displeasure. Or Elisha could have taken up a collection among the prophets and paid the debt. But the solution chosen accomplished several important objectives:

There seem to be a few basic principles that I can derive from this story about the way that God works:

The second story is rather more poignant, at least to me. Elisha desires to reward a Shunnamite woman who has shown great respect and care for him over a period of several years by setting aside a room for him whenever he passes through her town. When Elisha asks his servant for ideas as to how to reward the woman, Gehazi answers: “She has no son and her husband is old.” Although the woman begs not to have her hopes raised, Elisha prophesies that she will have a son within a year, and she does. Later the son (possibly still a toddler) dies, and the woman comes to Elisha. Grasping his feet, she cries out, “I never asked for a son. Didn’t I ask you not to raise my hopes?” Elisha sends his servant to lay his staff on the boy’s face, and ultimately the boy is restored to life through Elisha’s prayerful intervention. 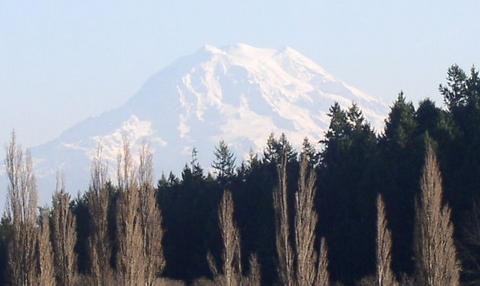 A picture taken while out on a walk, the day after Christmas.

This incident made me think of the way that God tenderly disappoints us. Sometimes we are living our lives, and God blesses us with some unexpected gift … something we didn’t ask for or even imagine was possible. Later, when we are more accustomed to it, that gift is taken away, and we are doubly hurt — disappointed once because of the removal of the gift, and a second time because of the perceived abatement of God’s favor. Like the Shunnamite woman, we are tempted to cry out to God: “I never asked for this blessing! Why do you raise my hopes, only to dash them?” If the gift was from God, and we enthusiastically thanked Him and gave Him glory for it when it first was given, how much more bitterly we feel the loss when it is taken away!

We know that all good gifts are from God, but it is hard to continue in faith when those good things are taken away. Even in her grief, the Shunnamite woman knew something that is good for me to remember:

When God disappoints us, our only recourse is to go to Him. When her son died, the woman put him in the prophet’s room, figuratively and literally committing him to God’s care. Without notifying her husband or anyone else, she hopped on a donkey and quickly made her way to Elisha … concealing her loss from everyone except the prophet himself. This strikes me as significant … I think sometimes when God disappoints me, I complain to everyone and their uncle about it, rather than holding to faith and going directly to God with my loss. This failure to exercise faith tarnishes God’s glory and damages our witness for Him. Complaining against God in this way also causes us to lose faith, rather than build it.

There is a popular Christian song that was recently released, entitled “Blessed Be Your Name” (written by Matt & Beth Redman). The chorus contains the refrain:

Quoting from Job, the songwriter expresses the constant truth that God is our ultimate recourse, and that He is worthy of our praise in the bad times as well as the good times. As God’s plan to provide for my family has been unveiled in the past eight months, I have felt considerable disappointment and loss … in some ways more so now that I have a job than while I was still waiting for God to provide for us. I have lost time with my family … both in commute time and in increased hours (I was working only about six hours a day, on average, after I was laid off and while I was trying to start my web development business). This new job pays $15,000 less a year than I was earning before I was laid off from AT&T Wireless, and we are paying a tidy piece of change annually to rent this house in Lakewood. My work is considerably less rewarding than prior jobs and the status I currently hold is at least two steps below that of more recent positions. Perhaps worst of all, there is no clear avenue for advancement … I feel a little trapped, and disappointed in this turn in the path of my vocation. After such rapid advancement in salary and status in the first eight or nine years of my career, it is hard to understand why this is happening to me.

Why does God disappoint us? Is He somehow limited in His resources … does He say, “Well, I would have liked to give you good and perfect gifts, but I just couldn’t afford it. We’re a little low on blessings up here, what with the recession and all.” Of course not … I smile, just imagining Him saying such a thing.

Knowing what I do about God, I suspect that He gives the most generously when He seems to be taking away. On multiple occasions, the Bible records stories where people were raised from the dead … the extreme case of God giving in a context of having taken away. Why didn’t Jesus rush to Bethany to save Lazarus from dying, and his sisters from grief? In some sense, having faith made it worse for Martha and Mary … they knew that if Jesus had been there, that Lazarus would not have died. Faith (or at least limited faith) in such a circumstance becomes almost a liability. The scriptures record that Jesus deliberately delayed, arriving only after Lazarus was buried, so that the power of God would be revealed and that God would be glorified.

God permits bad things to happen to ‘good’ people, and disappointing things to happen to mediocre people. He is not intimidated by this, nor does He wring his hands, saying, “Oh dear, I don’t know what to do!” His power and mercy and grace and goodness are revealed most clearly in our weakness. Perhaps I need to follow Paul’s example and teaching and rejoice in these disappointing circumstances, clinging to my faith in God and waiting on His good pleasure and timing.

… for I have learned to be content whatever the circumstances. (Phillipians 4:11b)

Already I am able to recognize several good and perfect gifts:

And the list goes on. Praise be to our God, who gives so abundantly!

As we opened Christmas gifts this year, I thoroughly enjoyed the gratitude, wonder and enthusiasm of David, my three-year-old. He is such a satisfying gift recipient that I have to be almost physically restrained from rushing out to buy him more presents. At one point in the flurry of wrapping paper, however, I had to take him aside and rebuke him for disparaging a gift he had received. Rachel had given him a small bunny rabbit that she had won as a prize in Sunday School, and about which she was very excited. Upon opening the packet, he let the rabbit fall to the ground, turned covetous eyes on his brother’s gleaming remote-control sports car, and said, “I want a car like Daniel’s.” His unbridled greed and ungrateful spirit were revealed in all their ugliness, and I immediately took him aside and spoke sternly to him on the necessity of squelching expression of such sentiments. In the midst of the joy of Christmas, a rebuke was exactly what my son needed … I wonder if that is how it is for God, sometimes. Perhaps He holds us on His lap and steels His heart against our disappointment and quivering lower lip and teary eyes. While He might prefer to continue to shower us with more gifts, sometimes it is necessary that we be pulled away from all the presents and reminded of our obligation to receive those gifts with a grateful heart and with a generous spirit.

We all must learn the painful truth: none of us quite gets everything we want, although some come pretty close.

Everyone should own a copy of this song … I like the version recorded by Tree 63. When I was driving back and forth between the Duckabush and Seattle, I used to hear this song played in the morning and evening, most days … serving as spiritual bookends to my days. Now whenever I am discouraged or disappointed, I play this song … sometimes several times in a single day, often at top volume when I get home from a long day. I keep it on my laptop and all my home computers. It reminds me of God’s sovereignty and His love for me, and the allegiance I owe Him, whatever happens. It reminds me that I must daily choose to glorify my God.

In your struggle against sin, you have not yet resisted to the point of shedding your blood. And you have forgotten that word of encouragement that addresses you as sons:

“My son, do not make light of the Lord’s discipline,
and do not lose heart when he rebukes you,
because the Lord disciplines those he loves,
and he punishes everyone he accepts as a son.”

Endure hardship as discipline; God is treating you as sons. For what son is not disciplined by his father? If you are not disciplined (and everyone undergoes discipline), then you are illegitimate children and not true sons. Moreover, we have all had human fathers who disciplined us and we respected them for it. How much more should we submit to the Father of our spirits and live! Our fathers disciplined us for a little while as they thought best; but God disciplines us for our good, that we may share in his holiness. No discipline seems pleasant at the time, but painful. Later on, however, it produces a harvest of righteousness and peace for those who have been trained by it. (Hebrews 12:4-11)

I can hardly wait to see what blessings He pours out today, that I can turn back to praise.

Guitar chords for Blessed Be Your Name