Today the train seems empty, which is odd, considering it is a Friday. Although they promise clear skies today, a combination of low clouds and fog hides the sun. It is almost a relief to the eyes, after all these days of sunshine. I’ve actually heard people complain about the weather, saying things like “If I wanted weather like this, I’d live in California.” People are funny.

Daniel loves to climb the tree in our front yard.

I’ve been reading in Ezra the last day or two, which chronicles one of the return parties from the 70-year exile in Babylon. The story starts out very cheerfully, with the Persian king granting permission to return, and supporting the endeavor with gifts and letters of authority. When Ezra arrived in Jerusalem, however, he found that a number of the existing Jewish leaders have taken foreign wives. Apparently this practice violated the covenant they had made with the Lord and had historically caused them to adopt the practices of the pagan people living in the lands around them.

Reading the last chapter of Nehemiah, I see that there was more to the story. Apparently a number of the children of these marriages could not even speak the Hebrew language, so thoroughly had they been assimilated into the local cultures. Additionally, the peoples of Moab and Ammon were explicitly excluded from the assembly of Israel, in accordance with Deuteronomy 23:3, because of those nations hostility to Israel when they returned from Egypt. Nehemiah writes that he even resorted to beating some of the men and pulling out their hair in an effort to shame them into doing what was right. Nehemiah seems to have been a real stickler for following the law … I must say that I like him and admire his courage. He seems to have had his enemies, though … throughout the book and four times in the last chapter Nehemiah calls on God to witness what he has done and to remember those who opposed him.

And yet Ruth was a Moabitess, and an ancestor of David. How strange are the ways of God!

Ultimately the men of Judah took an oath to ‘put away’ these foreign wives and their children; presumably sending them back to their non-Jewish relatives, with the aim of re-establishing their covenant with God and maintaining the purity of the ‘holy race’. It made me sad to think of the fathers explaining to their little children that they were ‘unholy’ and had to be sent away. I can’t help wondering if there wasn’t a better way to honor the holiness of God and to keep the covenant without breaking up these families, perhaps by offering up some expensive sacrifice or going through some exhaustive baptism ceremony? Wasn’t there a precedent for bringing aliens into the assembly of Israel, as was apparently done with Rahab and her entire family? 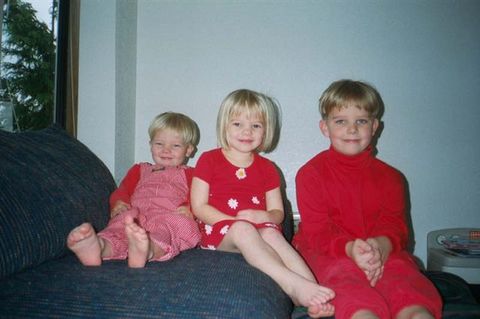 I’d have a hard time sending these three away, even if their Mom was an Ammonite.
(Picture from 1999.)

(I’ve often wondered if this same Rahab is the one mentioned in the genealogy of Jesus, mother to Boaz. Now that I think about it, there would have been only three generations, to span the entire period of the Judges, which seems to have been more in the ballpark of 300 years. Not saying it couldn’t have been the same Rahab, but perhaps it was actually someone who was named after her.)

In Malachi 2:16 it is written, ‘”I hate divorce”, says the Lord God of Israel … ‘. Yet only a few verses before, Malachi also speaks against the practice of marriage outside the covenant. Is there is any application of this principle within the context of the New Covenant? What does God think of our nation’s now-commonplace practice of divorcing ‘the wife of our youth’ and marrying outside the faith?

The wife of my youth with her new haircut.

Ultimately our relationship to God comes first, which may explain why Paul tells the Corinthians that if an unbelieving spouse wants to break up the marriage, we are to let them do so. Yet we also know that marriage is a picture of our relationship with God and is one of the few institutions established by God. I think it would have been very hard to live in the time of Ezra, and to make the choice to ‘put away’ a wife from outside the covenant. It makes me wonder if there are things in my life that, while similar to things that God blesses, are actually man-made substitutions from ‘outside the covenant’? Certainly a job can become like a ‘foreign wife’ if it is relied upon apart from God for provision, or if it becomes a God in itself. I can see how certain friendships might be ‘unholy’ and a believer might come to the point of ‘putting away’ those relationships which hinder them in their walk with God. Maybe I’m trying too hard to find application in this historical event.

Perhaps the essence of the application is that anything that lures us away from God (as happened with Solomon and his pagan wives) should be treated ruthlessly. As Jesus says in Matthew 5:30:

“And if your right hand causes you to sin, cut it off and throw it away. It is better for you to lose one part of your body than for your whole body to be thrown into hell.”

One thing that constantly amazes me is the depth and beauty of God’s creation.