Several days ago, I wrote a blog post, the first in nine months or so. It was strangely satisfying, in a way that one-line Facebook status posting is not.

One problem with Facebook is that other people get to comment nearly as much as you get to write. Since I have a bunch of clever friends, they all end up sounding more profound, erudite and intellectual than I, which is nowhere as ego-stroking as a monologue.

In contrast, since I tend to write very long blog posts, all but the fastest readers are lucky to finish it before they die of old age, let alone comment. So I end up getting to trot out my banal opinions, without having to compete in the marketplace of ideas. Besides, if someone does manage to read the whole article, and responds with a thoughtful, pertinent response, we can always ‘forget’ to approve their comment.

But I digress. Indeed, my digressions often have digressions of their own, which is something you rarely see in a Facebook status (although some have tried).

Yesterday, my oldest daughter discovered that we had posted a new article on our blog. She made a big show of being shocked into heart failure, and wiped her eyes in mock joy as she related her discovery of our newest post (the first since Valentines’ Day). In my eagerness for feedback, I probed further:

“Rachel — did you actually read it?”

“Well, no,” she admitted. “I just looked at the pictures.”

“There was only one picture,” I protested, ” … and it was a picture of someone else’s sandwich!”

That’s another good thing about blogging — with any luck, no one will actually read your post, and so you can get credit for communicating deep wisdom without anyone actually discovering that you are a blitherer (the verbal equivalent of a ditherer).

About now, if anyone is still reading, they’ve given up on erudite or profound, and they’re probably wondering if I plan to communicate anything in particular. If the title of this post didn’t clue you in, let me do so in plain English:

But now that I think of it, I do have a few thoughts. I un-digress.

This Fall, our pastor (assisted by various guest speakers) has been exploring what the Bible has to say about Heaven. It has been an interesting study, and my view of what Heaven will be like has been substantially fleshed out, to my considerable satisfaction. One of the things Christians are often fuzzy on, is what will happen to those who are still alive, when Jesus returns. There are various schools of thought; some think Christians are taken up into heaven before the Tribulation, others in the middle, even some think that Christians will stick around for the whole seven years of God’s judgment. Some think the whole Tribulation thing is allegorical.

Here’s what the Bible actually says, in 1 Thessalonians 4:

For the Lord himself will come down from heaven, with a loud command, with the voice of the archangel and with the trumpet call of God, and the dead in Christ will rise first. After that, we who are still alive and are left will be caught up together with them in the clouds to meet the Lord in the air. And so we will be with the Lord forever. Therefore encourage one another with these words.

Whenever Jesus does return, and whenever He calls His people, it seems we will rise up into the air, at least to cloud-level.

Here in Washington, clouds won’t be hard to find.

Naturally, there is some concern about this. What if you’re inside a building when the archangel calls? What happens to people who are driving cars, or operating heavy machinery (like in a Nutella factory)? Is there a particular pose that is appropriate for being raptured? Is it undignified to flap your arms? 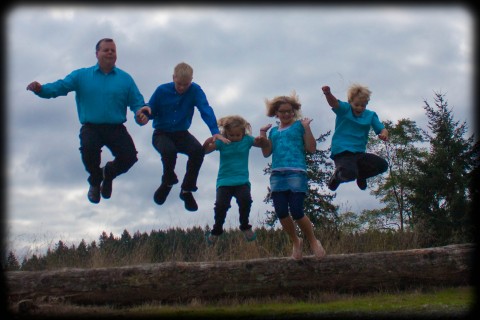 The kids and I decided to practice, just in case the Lord returns while we are alive.

There, I even put in a picture for Rachel.

One gracious commenter has asked if we intend to resume a more regular practice of blogging (perhaps to see if she needs to get a restraining order against us). The truth is, we don’t know. I’ve missed blogging, but it may be that Facebook status updates have killed blog-writing forever. Time will tell … as always, we are grateful for anyone who stops by our little blog.

P.S. Kathy has asked me to change the background to something more seasonal. But I figure, I’ve made it nine months — just a few more, and the tulips will be all the rage again.

14 thoughts on “Much Ado About Nothing”