One of my favorite hobbies is to tease and exploit my brother. In the past, I’ve had to exercise a certain amount of restraint, but now that Mark is a civilian, all bets are off. Mark was originally an armored cavalry officer (before he got all tech-y, or possibly tetchy) and went into simulations. Whenever I was tempted to push the limits in harassing or taking advantage of him, I would remember that only his sense of restraint preserved my home (and my town of residence) from being turned into rubble by a squadron of M-1 Abrams tanks.

Not my brother’s actual tank.

You can imagine my relief, when he decided to retire as a full Colonel. Now, as a lowly civilian, I seriously doubt that he can whistle up a tank squadron, so I can tease him mercilessly, and fully exploit his gullibility and earnest, dutiful, hard-working temperament. 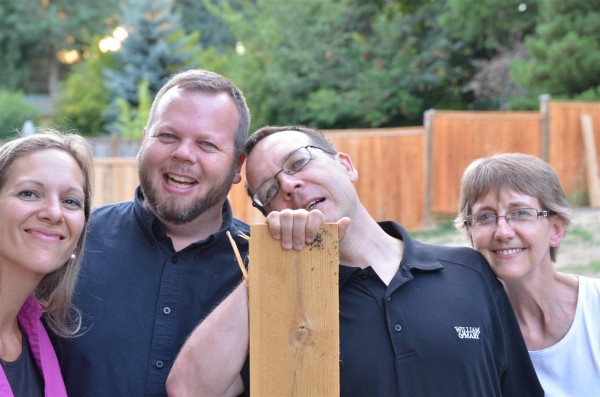 Some people really shouldn’t be let out without a keeper.

On Sunday, Mark came out to Washington for a job interview, and he and Liz and Tim and Sunny and little John, all came for dinner Monday evening. It was lovely to spend some time with them all, and we persuaded Mark and Liz to linger when Tim and Sunny took baby John home to bed. 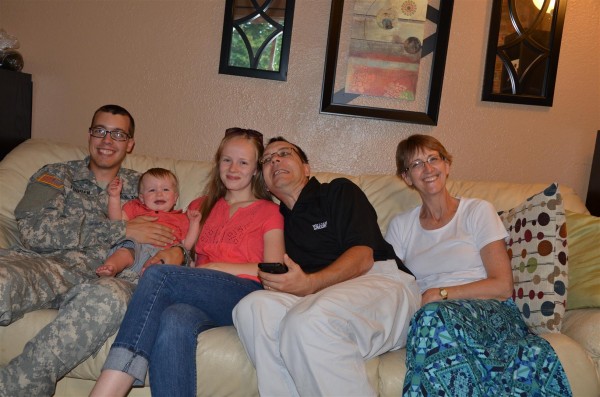 Challenge: See if you can pick out which one is my brother.

One of my other favorite hobbies is to get people to do repairs and maintenance on my home, or even (when I’m especially ‘in the zone’) to get them to make major renovations. When we lived in the Duckabush, I used my Tom Sawyer wiles on my brother and my Dad (and a few unwary neighbors), persuading them to build a significant portion of the deck that wraps around that house. The only reason we have a playground structure out at that house is because my brother couldn’t stand the way I dumped the playground pieces on my yard for several weeks (in the original Costco packaging). 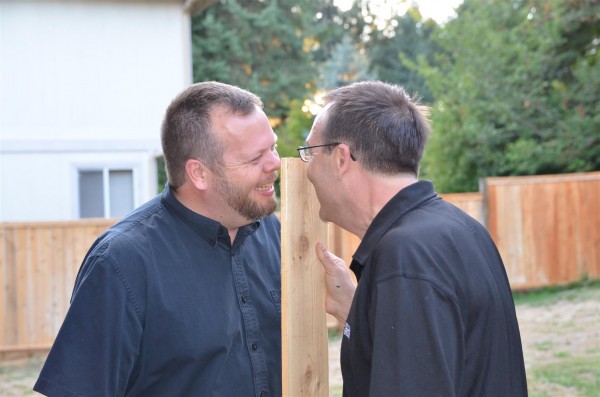 “Yes, that is a board, Mark. Very astute of you to recognize it — well done!”

So when Mark was here for dinner, I began to fantasize about what it would be like for him to live here. I’ve been thinking that this house needs his special touch, and that I might be willing (if he asked nicely) to let him build me a deck here, as well.

Now we wait to see if my brother gets a job offer, here in Washington. There is some talk of another interview elsewhere, but I am setting my face like tapioca against that idea. How would my brother build me a new deck, if he didn’t live here? The airfare would be prohibitively expensive, for one thing.

If I have my druthers, he will get the job here, and I can get him and my nephew over here to build me a deck and fix my back fence, while I play my game on the computer and shout helpful instructions. 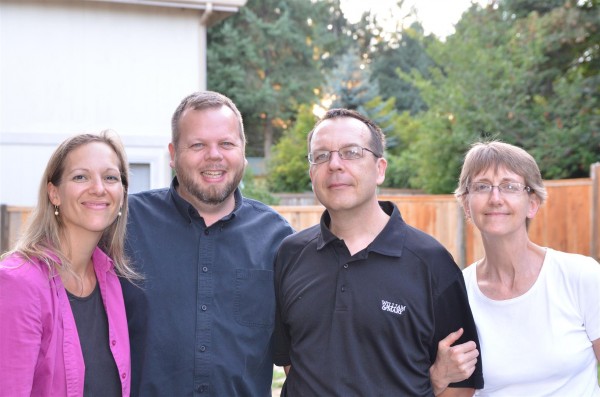 Standing on the site of the future Mark G. Edgren commemorative deck.

Some might worry that by writing this, I’m tipping my hand a bit, but happily, my brother is not only dutiful and hard-working, but the transition to civilian life may have left him a few rounds short of a full magazine. (He probably can’t read, either). I’ll keep you apprised of my progress in this worthy endeavor.

Geocashing
A Visit with Timothy
A Pocket Full of Posie