I admit, Kathy and I have taken a brief hiatus from our Project 365 blog writing. After hanging in with an almost-every-day, relentless schedule of blog posting, we suddenly both ran out of things to say at the same time.

As the school year ramps up, and various ministries at church also kick into high gear, we’ve found ourselves with more demands on our evening time. As the seasons change and the days are shorter, the inspiration to stay up late and write tends to suffer a bit, in comparison to snuggling down with a movie and a carton of ice cream. 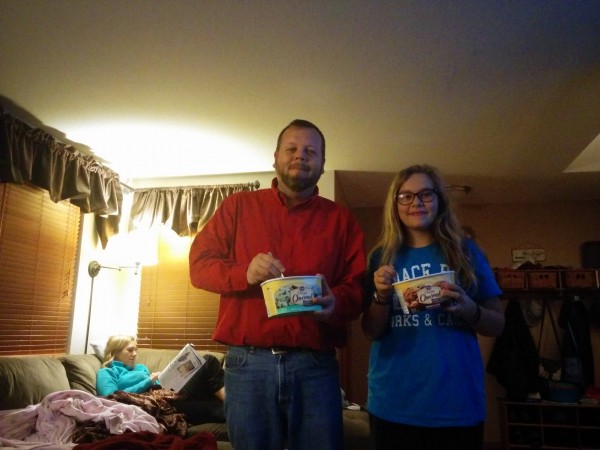 Sarah and I, caught in the act.

Still, things are happening in our lives. David was (rather belatedly) accepted into the Junior Naval ROTC program at a nearby high school. Typically, we had forgotten to register him until the end of the summer, and discovered (to David’s dismay) that the number of inter-district transfers is being strictly limited this year. Fortunately, we had just re-commissioned our closet as a War Room and we took the matter to God in prayer. After only four or five days of prayer, the matter was resolved, and David received a waiver which permitted him to attend the ROTC program.

Similarly, we’ve been praying for Daniel to be established at his Bible College with good friends and for favor with the Dean of Men — only a few days went by before we heard that he had recommitted his life to the Lord in a mass baptism service, and that he had met with the Dean of Men for help in pursuing godliness and resisting temptation. We are so proud of Daniel for surrounding himself with godly young men to protect himself from the evil one. As I told him on the phone tonight, “when you have a group of guys to pray for you and to hold you accountable, you’ve gone a long way toward eliminating about 97% of the trouble in your life.” I’ve certainly found that to be true in my own life.

Kathy and I have been walking and praying together a lot in the evenings, which (while not as cool as having a War Room) helps us to be united emotionally and spiritually.

All this to say that we are doing well, and have not fallen off the edge of earth. We’ll try to get back in the saddle of daily blogging, if only to avoid Sarah’s disappointed comments. “No blog again?” she sighs.