A few weeks ago, I made a critical error. It is the kind of mistake made by a person who suffers from occasional and inexplicable bouts of optimism. Sadly, I am afflicted with this condition, and the various disappointments of life have not yet taught me caution. 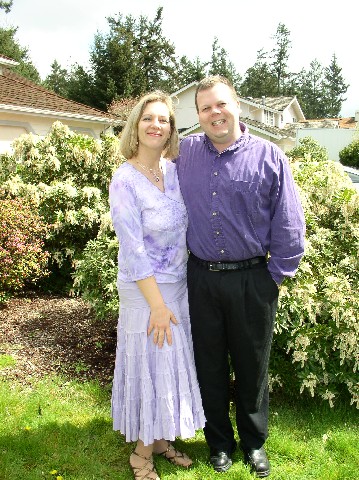 Me and my Sweetie on Easter

On April 9th, Kathy celebrated her one-year anniversary of adherence to the KMEP (Kathy’s Maniacal Eating Plan) which involves measured portions, no sugar consumption, and avoidance of processed grains and their derivatives (like bread, tortillas, hamburger buns, bisquits, pancakes, stuffing, cinnamon buns, waffles, muffins, bagels, crepes, donuts, eclairs, rolls, pie crusts, cakes, cupcakes, cookies, brownies, and pretty much anything else that makes life worth living). The basis of the plan seems to be that one’s digestive system should be forced to work for a living like everyone else, hence the avoidance of nutrients that can easily be converted into sugar (and thence to fat). Coupled with increased vegetable consumption and diminishing sugar cravings, the KMEP seems to be a very effective weight-loss and general health plan.

Since Kathy stuck to the KMEP so faithfully and lost more than 60 pounds, I felt that I should honor her in some way on her one-year anniversary. My instinctive response was to make her an ice cream pie, but for some reason that didn’t seem appropriate. In a moment of weakness, I decided to try the KMEP myself for a month, to show her how much I wanted to support her and honor her.

In one sense my decision was a resounding success. Kathy seemed very pleased (almost too pleased, for my liking) that I was joining her on the KMEP, “fellow workers in the vineyard” and all that. But in another sense (the part where I don’t get to eat what I want) the choice was a disaster.

I am now most of the way through the month and have become intimately acquainted with grains and vegetables that I never knew before. Unsure that I am richer for the knowledge, I can now assert that I’m not fond of red quinoa (pronounced Keen-Wah) or oats in nearly any form (although Kathy still uses oat bran on me when she thinks I’m not paying attention). I can take or leave millet, and I prefer brown rice to almost any of the ‘alternative grains’ that find their way into my meals. It turns out that (although I thought I liked it) I have a very limited capacity for broccoli, and so I eat a lot of salads and my mainstay is cherry tomatoes. Now I begin to understand why Kathy always makes these weird vegetable stews … it is hard to get enough to eat if you have to look your vegetables in the eye (or stalk). Better to slice ‘em and dice ‘em and serve them up as soup, however questionable its origins.

It really isn’t that bad, for some values of ‘bad’. Kathy takes good care of me and prepares each of my meals, carefully varying the proteins and casting wildly about for vegetables that I will eat. I doubt I would have the fortitude to stay on the KMEP if I also had to do the work of preparing the food — it is a non-trivial task to make some of this stuff edible at all.

At the risk of spending much more time on this than will hold the reader’s interest, here is a brief outline of what I am permitted to consume in a given day:

Breakfast: six muffins made of egg, apple, and a cup of oat bran

Lunch: a salad (maybe two cups of lettuce with some tomatoes)
a cup (cooked) of some weird grain
six ounces (cooked) of ground turkey
a cup of cherry tomatoes

Supper: a cup of vegetable soup
a cup of cooked vegetables
a cup of some kind of starch (like a potato)
six ounces of meat (usually some kind of beef)

After supper:
a cup of milk
six ounces of frozen blueberries
about 20 drops of a saccharin-based sweetener

As you can see, it is quite a bit of food, really — four cups of vegetables, two servings of fruit, around eighteen ounces of meat (including the three eggs in the muffins), and three cups of some kind of carbohydrate each day. I’m not sure where the milk gets counted. You may also notice the Dairy Queen Blizzard and the large serving of brownies, conspicuous by their absence. 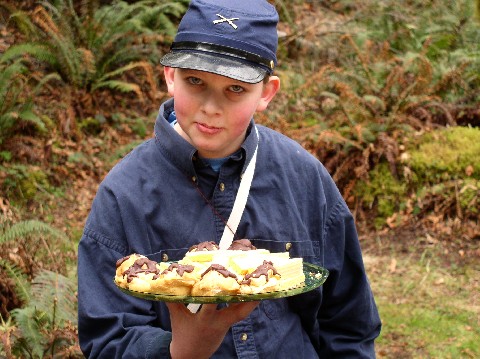 How could I refuse a creme puff when offered by my eldest son?

All in all, it seems to be about 1000 calories less than someone of my mass and sedentary nature burns each day, so I should hope to lose in the neighborhood of 2 pounds each week, on average. So far my loss has been considerably more than that (11.5 pounds in three weeks), so it may be that my metabolism burns a bit hotter than average (something I have often suspected). Ironically, if my metabolism is higher than average, this gives me less of an excuse for being overweight in the first place, although it is predictable when I consider how much (in â€˜normalâ€™ life) I actually am in the practice of eating.

Sometimes it is hard. One night I was serving ice cream to some guests and I had to tell myself â€˜NO!â€™ seven or eight times while I was dishing the dessert â€¦ I kept wanting to lick my fingers or â€˜finish off that last little amount in the cartonâ€™. I quickly broke out the blueberries and had my after-supper snack before the beads of sweat on my forehead were too noticeable. 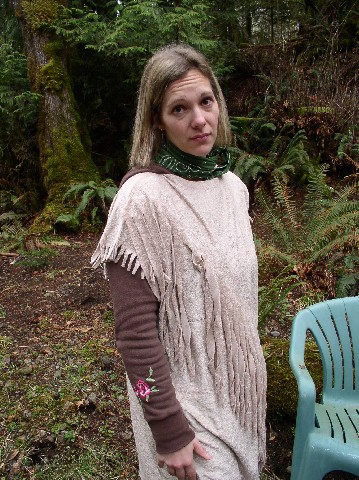 Iâ€™m not sure the KMEP is sustainable for me over the long term, in spite of Kathyâ€™s example. The other night I found myself standing in the kitchen with my eyes closed, fantasizing about a starch-heavy meal with Cinnabons and ice cream for dessert. I went on and on describing each component of the feast (â€œbiscuits slathered with butter â€¦ and more butterâ€) much to the amusement of my family.

As the one-month mark approaches, I notice Kathy becoming more and more unhappy with the prospect of my abandonment of the KMEP. I can certainly understand her viewpoint â€“ just because Iâ€™ve lost a few pounds doesnâ€™t conceal the fact that I am still substantially overweight. Iâ€™m just not sure I am willing to face a future with no hope of anything sweet â€¦

And yet, I am reminded of Philippians 3:19, in which Paul describes the enemies of the cross of Christ:

â€œTheir destiny is destruction, their god is their stomach, and their glory is in their shame. Their mind is on earthly things.â€

To what extent has my stomach been my god? Does my self-indulgent nature put me at odds with the will of God? Do I really want to risk numbering myself with the enemies of Christ?

There is nothing wrong with enjoying God-given food, but Iâ€™m not sure I currently have the capability of properly enjoying food without making it an idol. Certainly the accumulated weight from my habitual over-indulgence in this area makes it more difficult for me to serve God in areas that require physical stamina, not to mention the way it limits the things I can do with my kids.

I think the part that worries Kathy the most is the bad example of self indulgence that I am perpetrating upon my children. These are serious matters to consider, and I feel rather vulnerable in speaking out this openly, but would welcome any comments.