I used to think watermelon was my all-time favorite summer fruit. I have many memories of eating huge amounts of watermelon in the summer when I was growing up. I especially remember these plastic red bowls that my mother and grandmother used to have. I would cut myself a large slice of watermelon, trim off the rind and fill my bowl with watermelon pieces. Yum!! Nothing quite says true summer to me like cold, juicy watermelon. 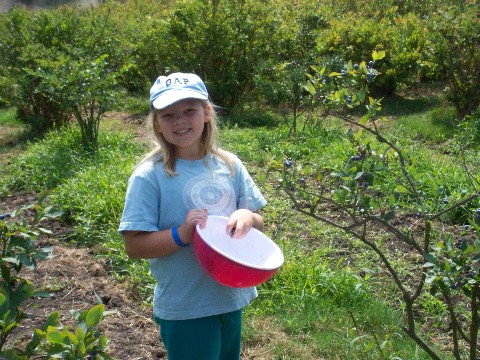 I LOVE blueberries! I can’t get enough of them. If I am fortunate enough to have fresh blueberries in my house, I will eat them by the handfuls. I think they are delicious! They are addictive and completely irresistible. Tim teases me and says when I move I sway the entire blueberry market and am able to keep whole farms in business.

When we used to live out on the peninsula, I discovered a local blueberry farm. It was wonderful! The berries were big and sweet and amazingly affordable. A good friend of mine knew the gardener and would make appointments for us to pick blueberries each summer. I would bring a child (usually Rachel) and pick until I couldn’t stand it anymore. Then, I would be in blueberry heaven! Enough blueberries to satisfy me (for a while anyway). I could eat them to my heart’s content, freeze big trays of them, and just basically enjoy these sweet treasures of God’s creation. 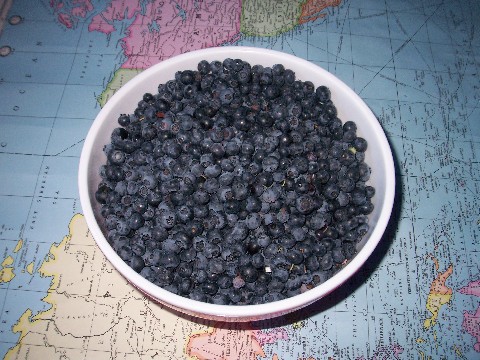 A month later I would usually be totally out of blueberries. Sigh. In the winter I survived on Costco’s frozen blueberries. Costco (here in WA) carries delicious frozen berries. They make wonderful smoothies. We put them in a glass of cold milk with a little sweetener and enjoy a perfect “ice cream” like treat. 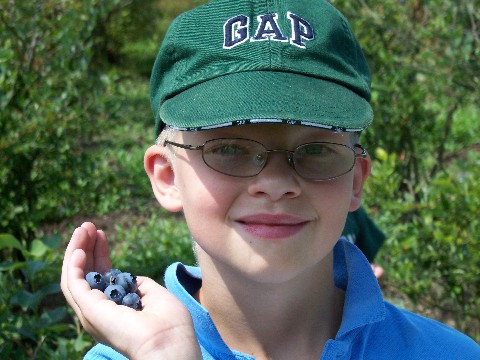 Recently several people have told me about a free blueberry picking place in Tacoma. On Thursday a friend called and happened to mention she went by the free blueberry patch but all the ripe berries were gone. I told her my mother in law had heard about a (very affordable) U-Pick blueberry place in Olympia. This friend (you have to love spontaneous people) said we should go right then and pick blueberries. We didn’t have anything going on that afternoon so I immediately agreed! We both packed lunches for our children, met at the nearby gas station and headed south on a quest for blueberries. I think she is a mutual blueberry fanatic.

We wound our way through Olympia and found three blueberry farms. Can you say Heaven Here On Earth!!! We settled on Gile’s farm and picked blueberries for $1.00/pound. Blueberry Picking in Olympia The kids did their best to help. They were all enthusiastic and cheerful (for the first half an hour). Joshua went around gathering everyone’s blueberries in a big bowl — until he was stung by a bee. He spent the rest of the time in the van reading his book. He told me, “I don’t like blueberries, I didn’t want to come in the first place, and I was stung by a bee. I think I’d like to read my book.” Ha! Even the threat that he would miss out on the bribery (I mean reward) ice cream cone from McDonald’s didn’t draw him out of the car (“We’re not supposed to be eating sugar anyway, Mom,” he told me.). 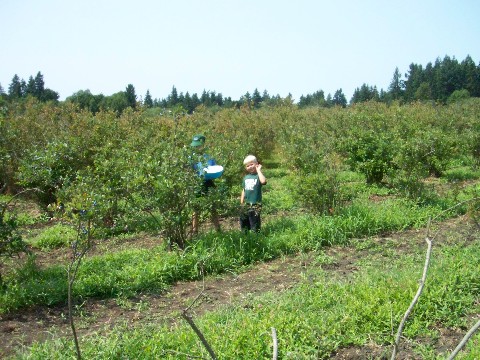 Ah well, the rest of the crowd rose to the challenge (I mean bribe). Rachel and Daniel were my best pickers. David was a trooper and stuck with us the entire time — even if he ate more than he picked. 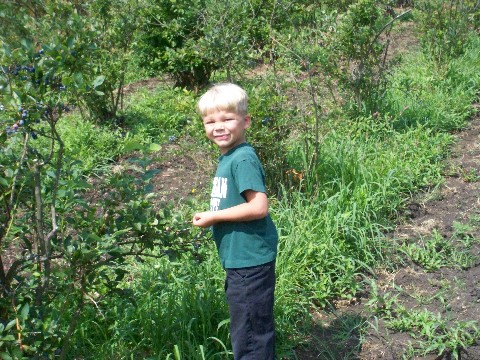 Sarah worked hard the first half — filling several small containers — before she ended up in the van with Joshua. It was a widely successful trip. I came home with several large bowls of blueberries and the promise to return. Michelle and I said, several times, that we would have to come back WITHOUT children and really stock up (it would be nice to make it at least a month and a half before running out of blueberries). 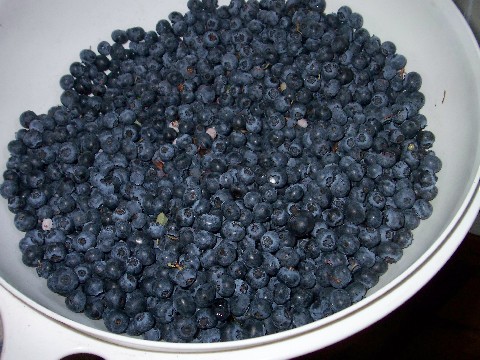 All of this writing is making me hungry. I think I’ll go have some blueberries right now!