We had occasion today to consider the parable of the lost coin.

“Or suppose a woman has ten silver coins and loses one. Does she not light a lamp, sweep the house and search carefully until she finds it? And when she finds it, she calls her friends and neighbors together and says, ‘Rejoice with me; I have found my lost coin.’ In the same way, I tell you, there is rejoicing in the presence of the angels of God over one sinner who repents.” — Luke 15:8-10

Kathy was adding a little salsa to a pot of soup (she can’t stand stews that are bland, even if she isn’t going to eat any), and as she put the salsa away in the fridge, she whacked her hand against the door. Looking down at her bruised finger, she noticed that her engagement ring was gone!

At about the same time, Sarah shattered her favorite snow-globe on the floor of the upstairs bathroom. Pandemonium ensued.

One ‘down-side’ of Kathy’s weight loss over the past several years is that her ring is loose — we keep meaning to get it resized, but we never get around to it. She lives in terror (O.K., she lives in mild worry, which sounds much less impressive) that she will fling it off while standing on a bridge or hiking through an impenetrable swamp. She doesn’t actually spend that much time in swamps or on bridges, but it is still a worry. 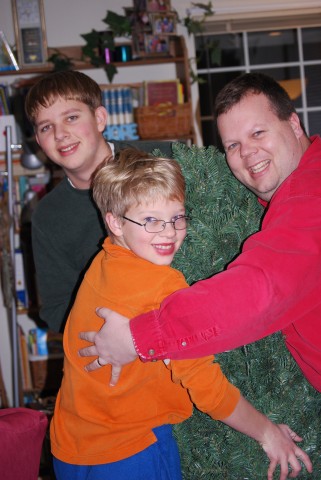 Now the we live on the Left Coast, the boys and I have become tree-huggers. Too bad it’s an artificial tree …

We rounded up the usual suspects (trash cans, sink, pantry floor, checked Kathy’s pant cuffs, looked inside and under the fridge) to no avail. Kathy wasn’t sure the last time she saw it … she was out at church attending a baby shower today, and we feared the worst.

Rachel (our resident detective) piped up with a comment: “If only someone had taken a picture of you recently, so we’d know when you last had it on your hand?” Happily, Sarah and David had just recently been taking pictures of us parents with Kathy’s little Kodak camera. Sure enough, a picture had been taken of Kathy leaning over the back of my chair — and the ring was on her finger! And to think people tease us for taking more than a thousand pictures a month!

“OK,” I said. “It’s got to be in the house somewhere … Mom hasn’t been out of the house since that picture was taken, about an hour ago.” Unfortunately, Kathy hadn’t been idle in that hour. Here’s a (partial) list of the things she did:

OK, maybe not that last one … but it seemed she was on the move, the whole hour! 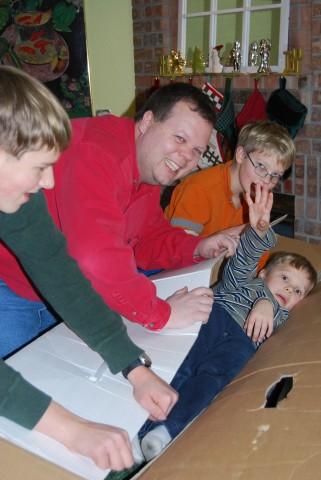 We got a little carried away, putting the tree in its box for the year.

“Do you have to be so busy, Kath?” I grumbled. Why can’t she follow my sterling example and stay in one place? People tell me I’m a saint to put up with her.

A bounty was offered: $10 or 5 one-hour computer chips to the person who finds it. I nearly trampled several children, throwing myself on the floor in front of the fridge, as though I was saving the family from a grenade. We prayed and asked the Lord to help us find the ring, and to give us sharp eyes to see it. We split up around the house, each hurrying to be the hero of the hour. I sorted through orange peels and coffee grounds in the garbage, while Daniel crawled around on the floor where the Christmas tree had been. We searched high and low, for more than thirty minutes, but without success.

I chimed in with an opinion: “The problem is, since we know it was lost here in the house, we continue to have hope. We’ll keep looking and looking, but if we haven’t found it by now, we probably won’t find it. But it will be a long time before we feel that we can give up and stop looking, so we’re actually worse off.” I’m often complimented for my ability to find the right encouragement for the season. As Kathy says about me, “Bummer man, he delivers.”

“I wonder if it somehow got into the box with the tree,” Kathy mused. Since Kathy didn’t help to put the tree away, I was less than eager to get it back down from its high perch in the garage. Kathy decided first to look in the box of the miniature trees she had put away earlier. I came out to the garage to help her get the box down … we dumped out the trees and gave each of them an individual shake-down. Voila! The ring appeared on the carpet as if by magic. 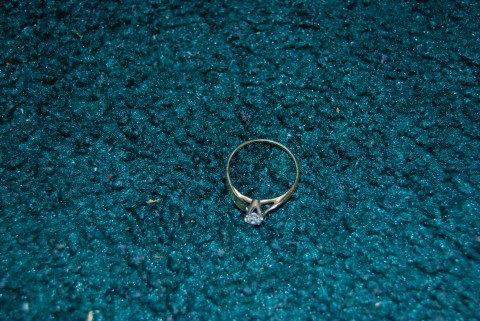 Hooray! The ring was found! 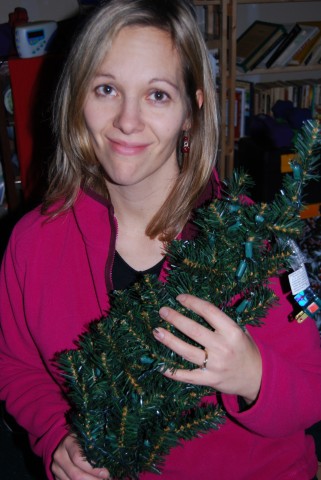 We were delighted, although Daniel (who had hoped for a five-chip bounty) was disappointed that he hadn’t found it. I suggested that, like the woman in the parable, we should have a party to celebrate. We ate the stew that Kathy had made, and I took all the kids to Albertsons to buy an individual pint of Ben and Jerry’s ice cream for each. There was much wrangling over flavors, but great satisfaction when we returned home. We ate it while we watched the second half of The Chronicles of Narnia and generally celebrated. Kathy (who doesn’t eat sugar) couldn’t have the ice cream, so I splurged on a couple of twelve-packs of her favorite sparkling waters. She really knows how to party, that Kathy. 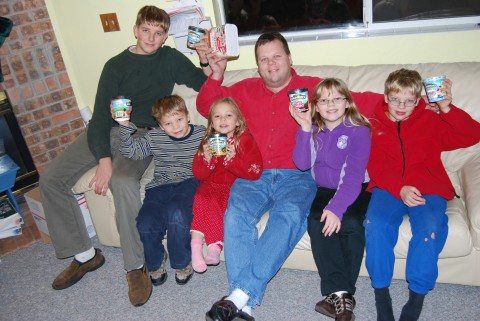 Maybe the kids got pints, but I went with the half-gallon! Hey, wait, I’ve been cheated! It’s actually only 1.75 quarts. 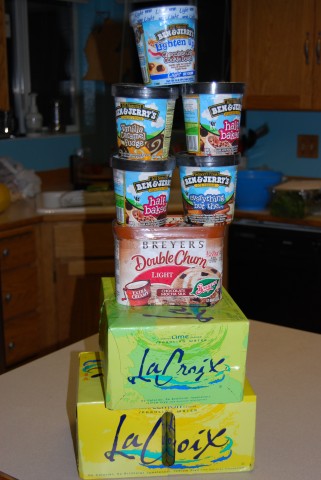 Rejoice with me! I have found my lost ring!

18 thoughts on “Rejoice With Me”