Two days of gorgeous weather here, sunshine and warm temperatures abound. Rachel claims that it was 80 degrees today at one of the parades in which she performed.

It was a beautiful day. We worked outside on our ‘castle’, and had time to play with the hose and a make-shift slip ‘n slide. We ate leftover pizza for lunch and stew for supper, thanks to Kathy who prepared meals for us before she gleefully ran off to attend the annual women’s retreat with ladies from our church. The kids played several elaborate games; their latest is a game called ‘Mousetrap’ involving a large rope tied on one end and twirled like a jump-rope (presumably by the ‘cat’). 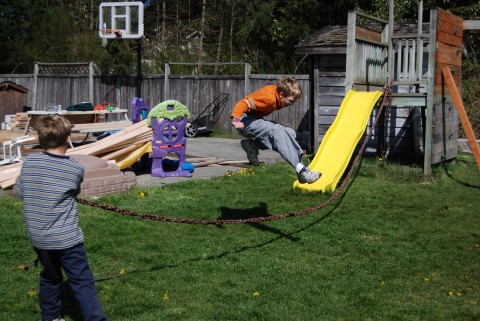 Daniel amazed us all with his mouse-like agility.

Joshua kicked the weekend off in his own unique style by mowing the lawn with our new mower. He was deep in The Count of Monte Cristo and decided to mow both front and back lawns on Friday so he could devote his Saturday to more single-minded reading. I recently assigned him six books to read before he is allowed to re-read Tolkien’s Lord of the Rings trilogy, so he is burning through them as quickly as he can. 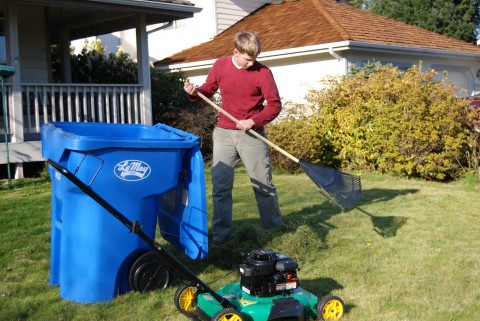 Kathy and I agreed to use part of our tax refund to buy a new mower. Joshua put it through its paces.

We had a good day. I bought the wrong length 2′x4′ studs on Friday, so we had to go back to Lowe’s for more wood — then I had the wrong size nuts for my bolts, so back to Ace Hardware I went again. Still, we managed to get a couple of walls up on the ‘castle’, much to David’s excitement. 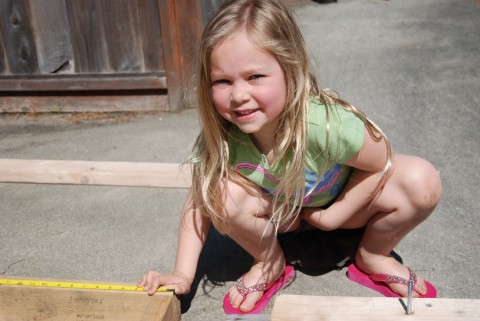 How does that saying go: “Measure once, cut three or four times … ?”

“You’re almost done with it,” he exclaimed. Seven-year-olds aren’t very hard to please, when it comes to construction. 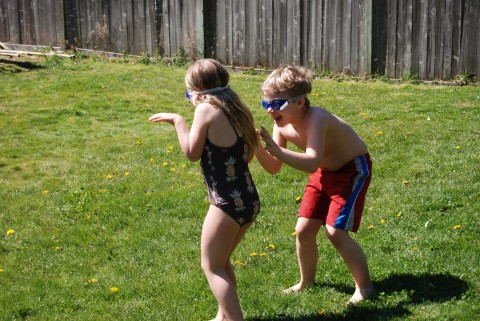 The ‘castle’ is quite a bit taller than we expected — almost gangly, if you can use that word to describe a small building. I plan to put in a floor at about 6′ and use the top part for battlements, at least until we can put a roof over it. Let’s hope we don’t get any serious wind before it is more stable, or we’ll end up with a lot of scrap lumber and not much else. We haven’t yet decided how to decorate the outside — maybe we could paint boards to look like stone? 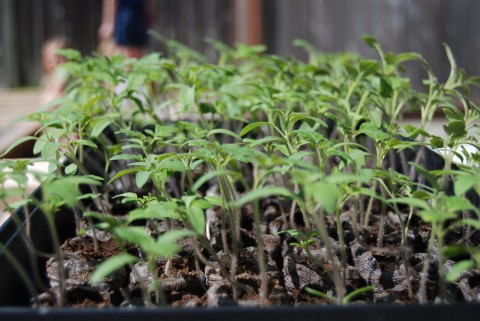 Daniel and I are very proud of our tomato seedlings.

We even brought our tomato plants out for the afternoon, so they could become ‘hardened’ to the wind and sun. They seemed to like it, although several of our little seedlings drooped a bit until we perked them up with a good watering. 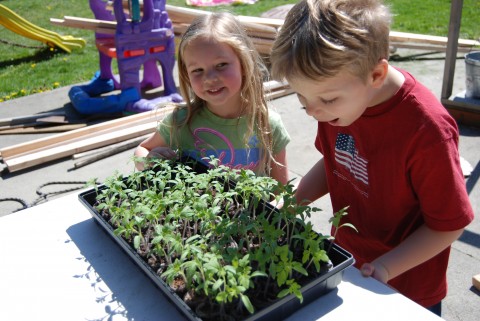 David and Sarah can’t wait for their seedling tray to sprout (it’s still under my bed, germinating).

Toward the middle of the afternoon, I began feeling my allergies in earnest. This has been a pretty gentle season for me so far — I’ve been able to stay on top of it ever since allergy season started (for me, in late February). Tonight, though, I’m runny-nosed and bleary-eyed and I’ve already taken my whole day’s allotment of Allegra (and then some). It may be a long night.

You’d think it was Summer, the way these kids carried on in their bathing suits!

Rachel spent the day performing in four Daffodil Parades in the area with the Drill Team from our HOPE homeschooling co-op. Their costume involved jackets and black clothing, so she was pretty hot. They went out for pizza afterward, so we weren’t able to retrieve our sweet Rachel until 9 pm, which is why she is conspicuously missing from these photos. 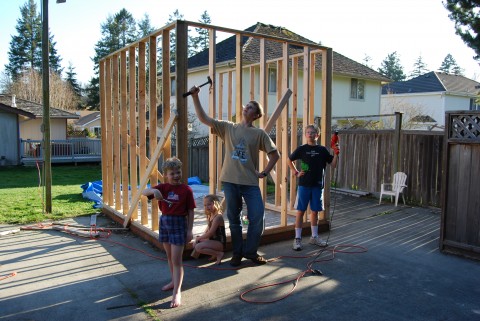 Family Photo
The Sanctity of Life
Love languages: by Rachel