Now that our cumulative 14″ of snow has completely melted, and the presents are (mostly) opened, we have a moment of respite from our hectic Christmas schedule. We drove out to the Duckabush to spend Christmas evening with my folks, and stayed for a couple of days. It is never long enough, when we go out, and we slighted a few friends, for which I am sorry. 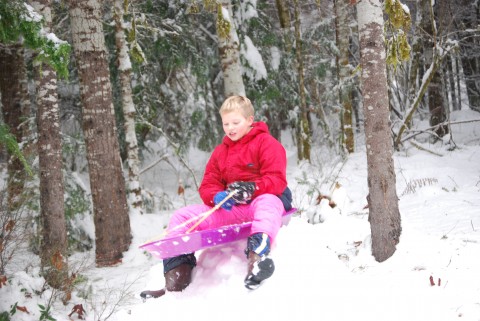 Happily, since the time of this photo, Daniel has acquired manly black snow pants.

The snow was still heavy on the ground, and had begun to melt by the time we were ready to leave. There was about 6″ of slush on the road, and I was very much afraid we would get stuck or slide off the road as we left the valley. I worked myself up into a fearful tizzy, and was quite short-tempered with Kathy — I just wanted to get the van down the two hills and get it over with, so I wouldn’t be afraid anymore.

I don’t think I’ve been that scared, since my Army days as a paratrooper. Funny how the mind can play tricks — we drove down both hills safely, and made it home with no trouble.

As soon as there was some quiet, Kathy rushed to fill the void: “How ’bout we have a New Years’ Eve party?”

I reluctantly agreed. As an introvert and a parent of five children, I treasure my hard-won peace and tranquility. “Couldn’t we just have a quiet evening at home?” I begged, querulously.

Kathy was relentless. “Let’s see, I’ll make Mesa Manna rolls, and Spiced Cider Tea … we’ll invite some of our friends, and it will be great!” One of the things I love best about my Kathy is her enthusiasm for life. 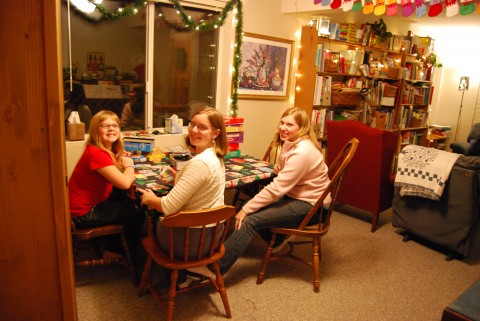 Rachel’s good friends, Sarah and Jenny, came over before the party

We decided to host a game party, and phoned ’round to gather some friends. As is often the case, we forgot a few people (for which we apologize) but we still ended up with a houseful — 13 adults and 24 kids. We permitted guests to stand around and talk a little, but pretty soon we got the game tables going. We played many games: 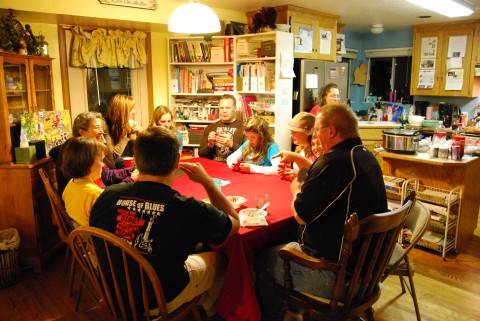 A friendly game of Scum 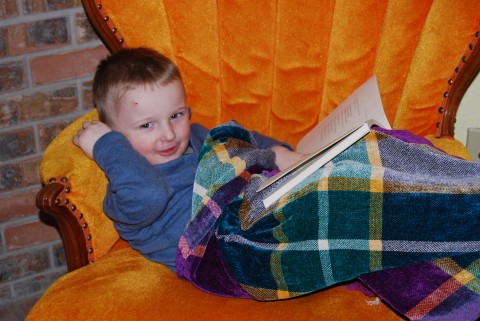 There’s one in every party — a person who just wants to curl up with a good book.

“Stop running around wildly,” Kathy scolded me. So I spent the evening growing beans with a few like-minded deep-thinkers.

I’m sure they had fun at the “loud party game” table, but I lost interest in that table when I was relegated to Scum (the lowest-ranked player). Nobody says I have to be a graceful loser.

is a fun and addictive game in which you try to plant various bean crops, and are compensated according to the number and rarity of your beans. Some players tried to build bean empires on the rarest of beans, cashing in on Cocoa, Garden and Red Beans. I developed an occasionally-winning strategy with the mid-class beans, including Soy, Green and Chili Beans (although I dabbled in Garden Beans when the opportunity presented itself). 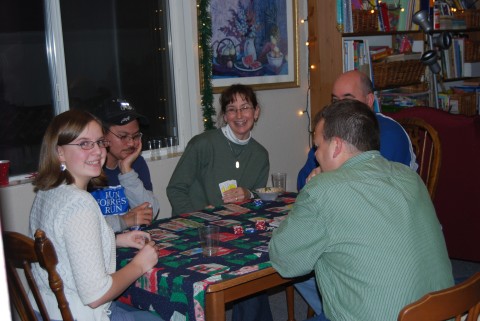 Our friend Steve lost a couple of rounds, so he decided to invest in the cheapest and most common beans, including Coffee, Wax and Blue Beans. Building an empire on bean donations, he managed to eke out a victory a little after midnight, much to the relief of his family. “We’re not leaving until I win,” he growled after the third round. 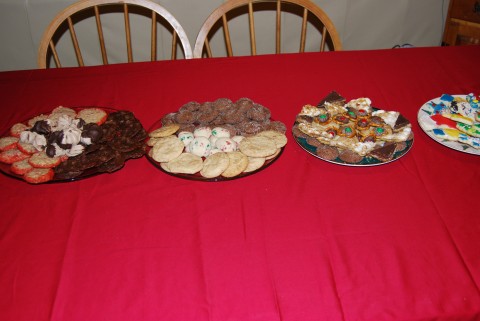 Showing heroic diligence, I was careful to sample each of the cookie varieties.

I had a lot of fun, and there were many delicious things to eat. Julee brought a delicious Prime Rib soup and Cheesy Sausage dip, and cookies abounded. Don and Jennifer brought meatballs, and even set some aside that were ‘clean’ (no sugar added) for Kathy. There were brownies and Grape Fanta for the kids. Michelle brought some Chex mix and a white chocolate pretzel mix, and a chicken lasagna in a crock pot. There was a huge veggie tray and frosted pumpkin bars. Someone brought several bags of chips, and I broke out the last of my hoard of Banana Punch.

The next morning, we talked about the fun we had, and how many food items we forgot to offer to our guests. “We should have another party,” I enthused, momentarily abandoning my introverted ways. “Why don’t we do Game Night every Friday”? I asked, conveniently forgetting the all-day cleaning frenzy that had preceded this party.

Kathy smiled at me patiently.

“Or maybe we could just invite people for whom we don’t need to clean … ? ” I suggested tentatively.

7 thoughts on “Gaming Out the Old Year”