I have the best impromptu drama team ever. Week after week, they faithfully show up and bravely take roles in the AWANA skits I write, often with less than an hour’s rehearsal time. They are clever, expressive and hilarious, rich in verbal banter and slapstick physical humor.

I usually write my scripts in the hour I spend on the train on Tuesday mornings. By Tuesday evening, I’m often too tired to fine-tune the skit, and so I put it off until Wednesday. Today, I was furiously finishing Daniel and the Lion’s Den at 4:30 pm. This kind of writing schedule can produce some interesting imbalance.

As my oldest son remarked: “You spent five pages setting up the situation, and then burned through the whole story of Daniel in the Lion’s Den in four paragraphs.” 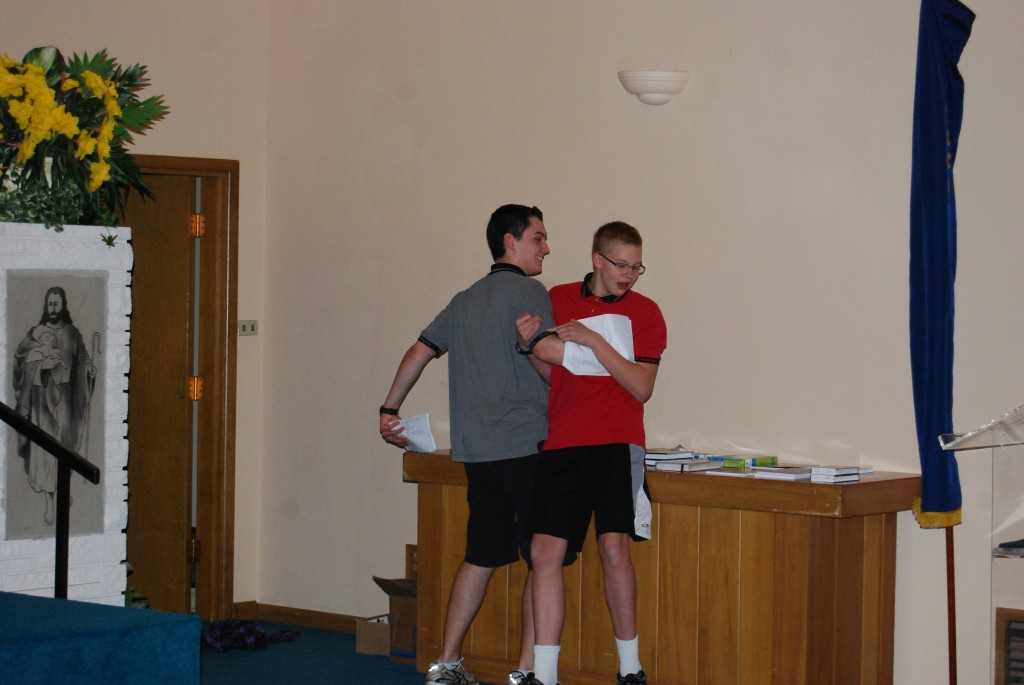 Before being thrown to the Lions, Daniel was briefly jailed, while the King tried to find a way to avoid killing him.

I recruit my actors and actresses via Facebook, like all the big studios do. After describing the skit at a very high level, I made my usual casting call via Facebook messages, rounding up the usual suspects: “Who wants a part?” 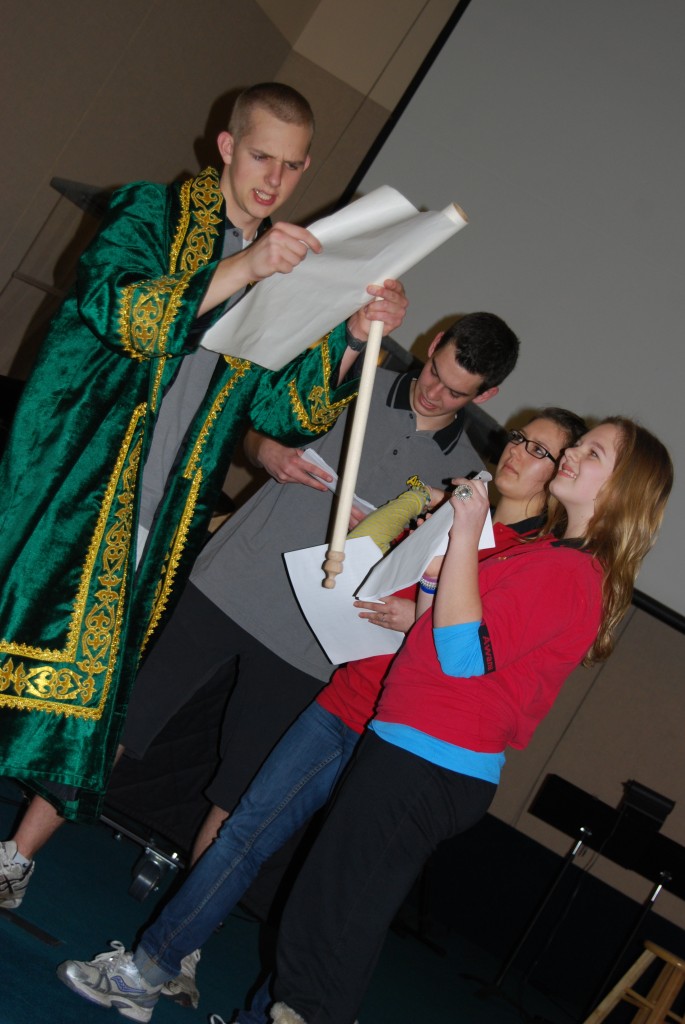 King Darius tried desperately to find a loophole in the law, so he could save Daniel.

Poor Nate, he showed up at 4:45 pm. At 5:03 pm, we breezed in; fortunately, Nate is very patient and forgiving. We zipped through two quick rehearsals and scrambled to find props and costumes.

I love writing scripts for these talented teenagers. Joshua naturally gravitates toward narrator and kingly roles, while Nate and Daniel excel in physical humor. Rosala and Rachel feed off each other with their clever banter, often playing evil characters in a way that kids can understand. Candace, Logan and Austin are frequently involved in various roles, and James debuted tonight as an Angel. It is a delight to produce a skeleton of a skit and to watch the AWANA Players turn it into a masterpiece, for the edification of the kids in our program, and to the glory of God. 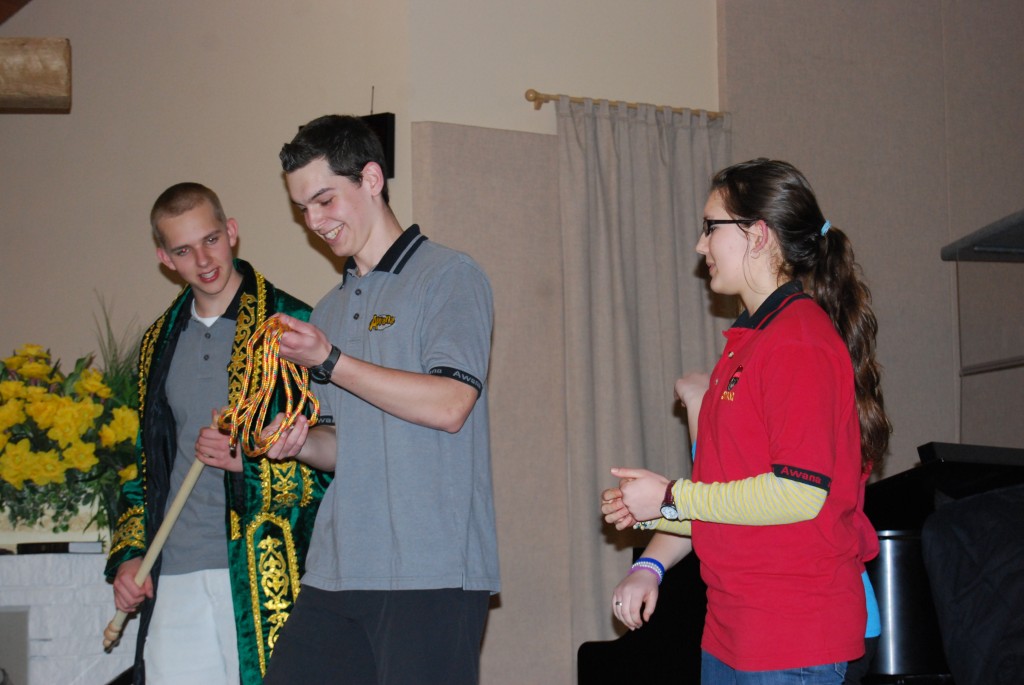 When it came time to pull Daniel out of the lion's den, we had some technical difficulty with the rope.

It is particularly fun to build on some of the silly traditions, week over week: like making sure there is always a ‘Dum, di-dum, dum, dum’ line for Nate, or finding new and dangerous ways of man-handling Daniel around the stage. Nate’s elaborate and exaggerated efforts to sneak across the stage have become a core element of any skit, as has Joshua’s official Narrator’s Staff ™ or his silly Scottish and Russian accents. 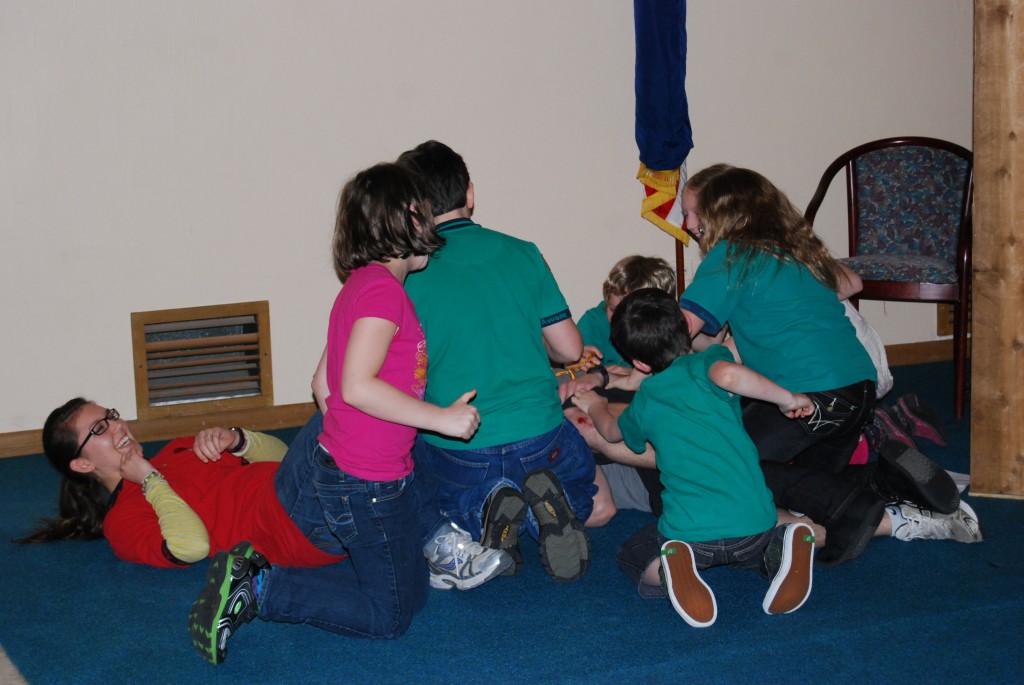 I didn't have any difficulty recruiting lions, willing to leap upon, and messily devour the evil advisors.

Every week I feel as though I have been saved from the Lion’s Den by the work of these teenagers. It is a huge blessing to me to have such faithful and enthusiastic thespians involved in our AWANA program — and this on top of their existing duties as T&T, Sparks and Game leaders. On behalf of our church, the AWANA kids, and most especially from my own heart: Thank You, AWANA Players!

4 thoughts on “Snatched from the Mouth of the Lion”