For many years, I’ve been teaching Sunday School with one of my best friends, a man named Tung (pronounced a little like ‘tome’, for those Westerners who can’t manage the Vietnamese ‘ng’ sound). We make a great team: Tung is a gracious, articulate and intelligent man, while I, um, well, I might have to think about that for a minute. I suppose at least I provide comic relief and serve as a whipping boy for his sense of humor. 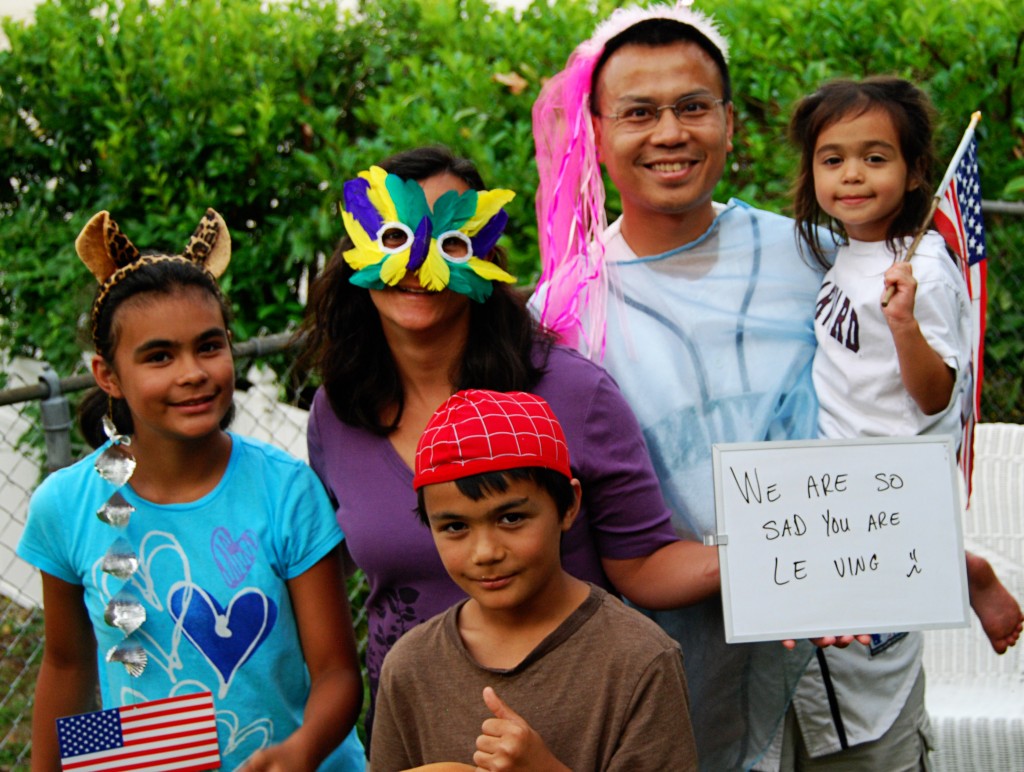 Tung and his beloved family …

In the last couple of years, we’ve expanded our class to include kids as young as fourth or fifth grade, which adds a certain amount of challenge. While some adults can handle 80 minutes of inductive study of a chapter of the Bible, most kids are looking for a little more interaction. So we add movie clips, skits, crossword puzzles, quizzes — whatever it takes to make it more interesting and endurable for the younger set. Truth be told, the grown-ups like it, too.

Recently we’ve been studying the book of 2 Samuel, and (as often happens) it was my turn when a difficult chapter rolled around. For some reason, this seems to happen a lot — I get all the circumcision chapters, the genealogies, the gruesome stories of child sacrifice, anything that might be R-rated, or at least PG-13. It always seems to be Tung’s turn to teach when the chapters are chock-filled with deep spiritual truths; I haven’t yet figured out how he does it. Maybe he actually reads ahead?

Anyway, chapter six rolled around, in which David, recently made king of all Israel, decides to bring the Ark of the Covenant to his new capital of Jerusalem. There is a huge celebration, but along the way, one of the men improperly tending the Ark touches it, out of fear that it will fall off the cart, and is struck dead by God. Talk about a ruined party! It is a strange and difficult story, especially if you don’t have a high appreciation for the Holiness of God.

Not the actual Ark of the Covenant …

I was trying to decide how to bring this lesson home, and it happened that the day of the class fell on Tung’s 40th birthday. Soon, my fertile brain was a-scheming, and a plan was born.

I introduced the passage in the usual way, by having the class members read verses aloud. I had them answer some of the questions that dealt with the early part of the chapter, and we watched several video clips about ruined parties — like the birthday scene for Leo Marvin in What About Bob.
Then I paused. I made a short speech about it being Tung’s birthday, and how he had served the church so well as an elder, small group leader, Sunday School teacher, etc. I unveiled a fancy cake I had bought for the occasion, and asked him to come up to cut it. On the table, I had a bowl of unshelled pistachios, by pre-arrangement. 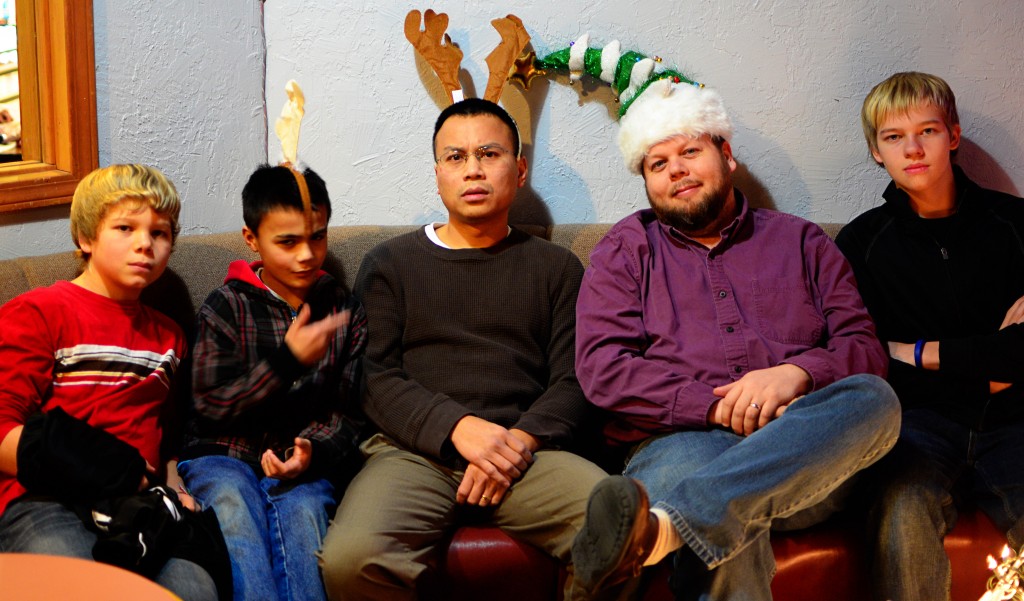 Not everyone can wear reindeer antlers with distinction …

Standing in front of the class, about to cut the cake, Tung suddenly stopped. He angrily pointed at the pistachios.

I made embarrassed and apologetic noises, backing away slightly.

“I can’t believe you would offer pistachios at my party when you know I hate them,” Tung snarled. Then he picked up the bowl and savagely flipped all the pistachios into my face. They rained down around my feet as silence fell on the classroom like the blade of a guillotine. 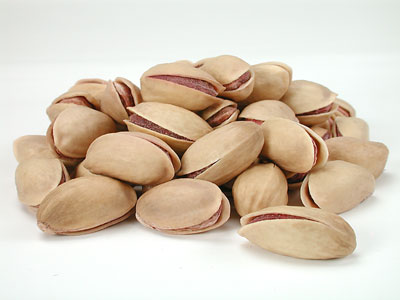 No pistachios were harmed in the writing of this blog post.

Then he spun on his heel and walked out of the room without looking at anyone. I stared after him, speechless for a full five seconds, then I bent down and began to pick up the pistachios, face red.

“Tung is under a lot of stress right now with his job as a principal,” I mumbled. “I should have remembered that he didn’t like pistachios.” I blinked my eyes as though fighting back tears.

No one moved. People furtively glanced at one another, unable to believe that my effort to honor Tung had gone so badly wrong. After what seemed like several minutes, but was really less than 30 seconds, I walked over to the door and motioned for Tung to come back in. He came back in, smiling, and we served the cake as I explained how this was a word picture, and that Tung actually liked pistachios.

In all seriousness, it must have been terrible for David, trying to honor God, to have his celebration go so wrong, even to the cost of Uzzah’s life. I’m sure he did some serious soul-searching in the months that followed.

As for me, I chortled for the rest of the day, about how effectively we had fooled the class, especially some of the younger kids, who were aghast at Tung’s conduct. I found out later that Daniel was so affronted at Tung’s treatment of me, that he was formulating plans to ‘take Mr. Tung outside’ if needed. 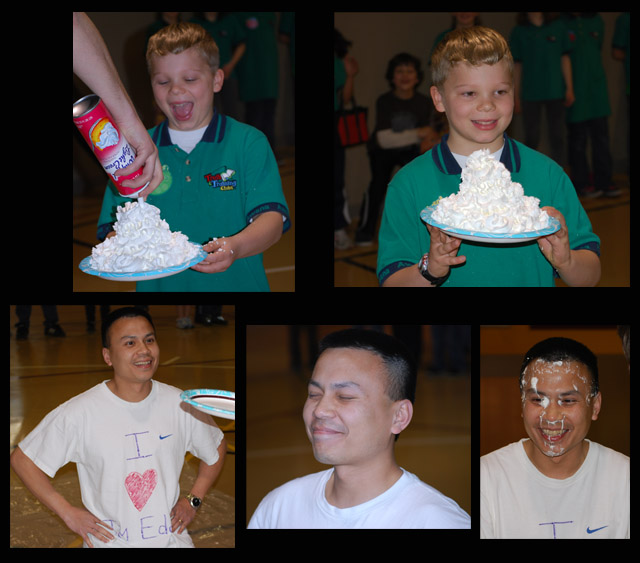 We are still good friends — indeed, Tung would take a pie for me, as he did for this AWANA special event.

Nobody ever said Sunday School had to be boring, but I may have overshot the mark on this one and traumatized a few of the younger kids. Hopefully the therapeutic counseling fees won’t be too expensive.

Tomorrow I’m teaching on chapter 8, in which David slaughters captive Moabites and hamstrings horses. Any ideas?