On Thursday I had the opportunity to attend the rehearsal dinner for my oldest son’s wedding. I was taken aback a little when most of the ladies were dressed in their First Communion Dresses. I supposed that was the format. Joshua and Kelsie were married on Friday evening, to the general delight and satisfaction of their assembled friends and family. We greatly enjoyed witnessing this momentous occasion as the newlyweds embark on the adventure of their marriage. 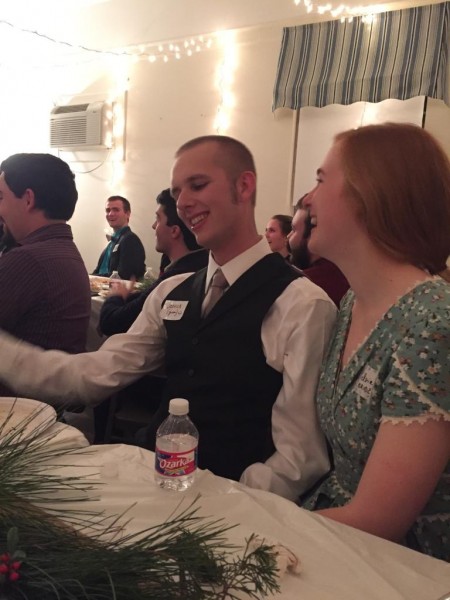 It was such fun to celebrate with Joshua and Kelsie.

Being the father of the groom is a pretty good gig. Kelsie’s family took care of the reception and nearly all of the details of the wedding itself — all I had to do was show up, wear a suit, and pay for the rehearsal dinner. But I must admit, I had some misgivings a few weeks ago, when Kathy told me that I’d be providing a blessing at the end of the dinner. 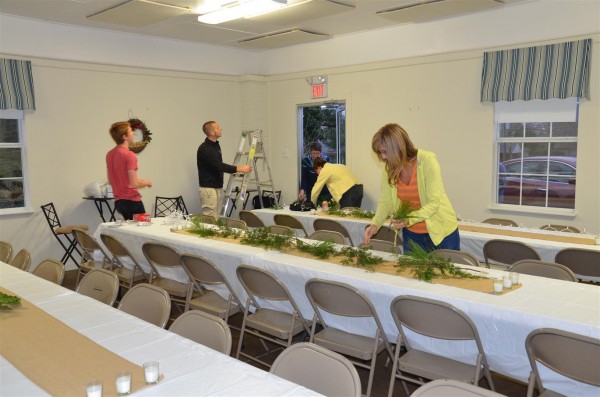 Getting the room ready for the rehearsal dinner …

“A blessing?” I pictured some saint of old like Jacob or Isaac, blessing his sons on his deathbed. “I’m not sure I can pull off the whole patriarch thing,” I told Kathy (although I do have a beard). Later, on the phone, Joshua assured me that I was expected to make some final remarks at the Rehearsal Dinner. I decided I would put some thought into what I would say, rather than trusting entirely in my ability to extemporize. “You might want to make a few notes,” Kathy wisely counseled.

Little did I know that the testimonies and speeches during this event would be one of the highlights of my life.

It began with some of Kelsie’s family reflecting on her character and their relationship with her. Several had notes to which they frequently referred as they related various amusing anecdotes — I began to wish I had followed Kathy’s advice. 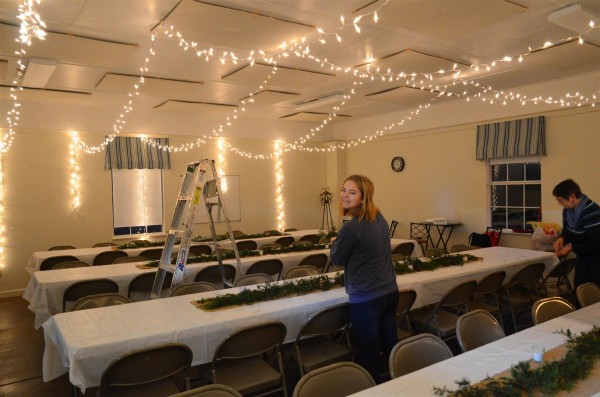 Michelle’s idea to put up Christmas lights was excellent — it really transformed the room.

But then several of the groomsmen stood to speak about Joshua, and several of the bridesmaids spoke about Kelsie, and I began to realize that this was much more than a rehearsal dinner. This was a sacred celebration of the work of the Holy Spirit in and through the students of Union University, and I was privileged with a front-row seat to the Christian community which had been built during the years that Joshua and Kelsie were in Tennessee.

We were blithe enough when we sent Joshua off to school at Union University. He had received a full tuition scholarship, and we really liked what we heard about the school from his cousin, Rebecca. Joshua’s faith in God was solid — we had little fear that he would fall away from the Lord as so many do, when they begin re-inventing themselves in college. 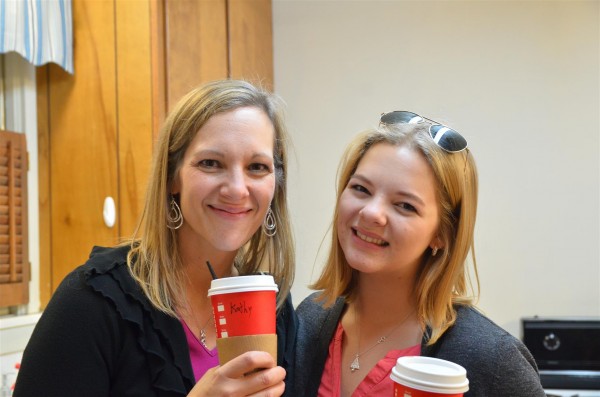 Rehearsal dinner preparation is always better with a coffee from Starbucks.

But I guess we didn’t really think through what would happen when Joshua got to school — how he would begin to intentionally surround himself with a cohort of other like-minded men of God, and what they would build through purposeful, obedient conviction, walking in faith together. As each of the young men and women stood and spoke about godliness, faithfulness and purity, I felt as though I was attending a rehearsal for the Wedding Feast of the Lamb.

Then I heard what seemed to be the voice of a great multitude, like the roar of many waters and like the sound of mighty peals of thunder, crying out,

“Hallelujah! For the Lord our God the Almighty reigns.
Let us rejoice and exult and give him the glory,
for the marriage of the Lamb has come,
and his Bride has made herself ready;
it was granted her to clothe herself
with fine linen, bright and pure”

– for the fine linen is the righteous deeds of the saints.
And the angel said to me, “Write this: Blessed are those who are invited to the marriage supper of the Lamb.” And he said to me, “These are the true words of God.” — Revelation 19:6-9

We walked through the ceremony twice, and then settled into a back room of the church, crammed wall-to-wall with tables and chairs. With a wedding party of two-dozen, plus family members, we were a snug group of fifty or so. 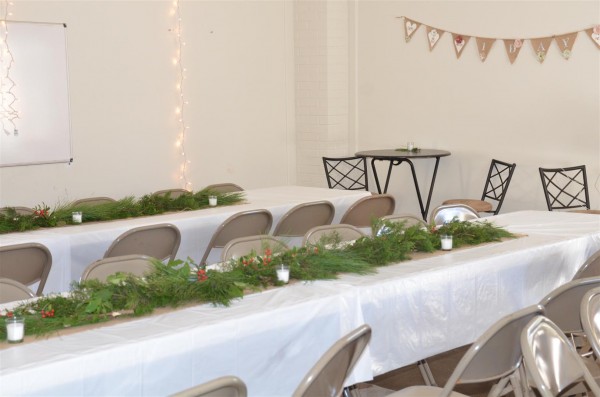 I was worried about how tight the seating was, but it actually turned out very well — it gave the meal a very intimate feel.

It was my role to conclude the time with my blessing — so as people were finishing the meal, I stood and warned the assembled wedding party and families that when I next stood up, their opportunity to speak would end. Then I sat back and enjoyed the show.

Two hours later, I leaned over to Kathy. “Should I put an end to this? Surely people have sat in these chairs long enough?” 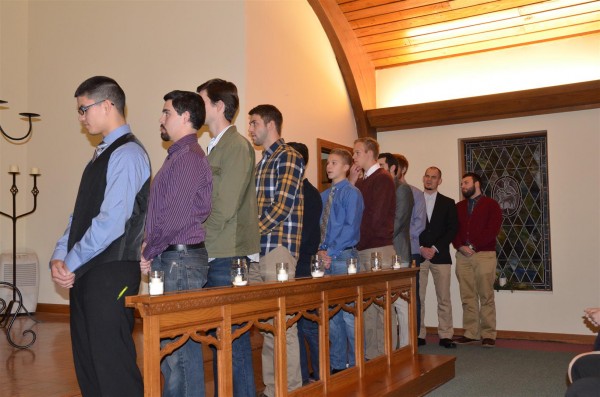 It took some effort to fit the wedding party across the front of the church, but we eventually managed.

Kathy encouraged me to sit tight, and I settled back into my chair as two or three more people stood to testify. Each story contributed to the central theme: that Christ is glorified in Joshua and Kelsie, but also among the other students of that college in a rare and deeply-satisfying way. 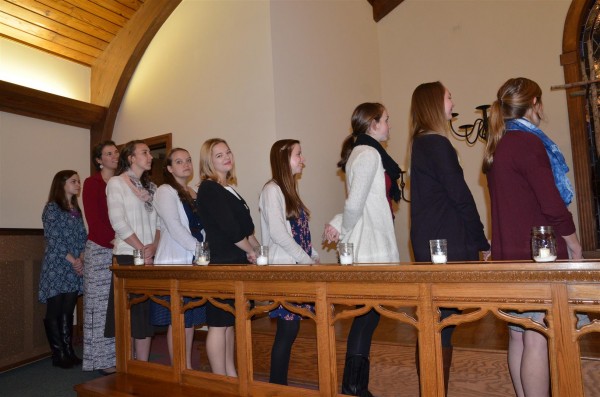 What a lovely group of bridesmaids! Kelsie is very blessed to have so many dear sisters and friends.

I realized that I wanted my younger sons and the other young men present to hear these testimonies — to catch a vision for what God can do when a few young people stand together in obedience to His Word and the Holy Spirit. As I later commented in my blessing, we were witnessing the joining of three families — Joshua and Kelsie’s natural families, plus the family of faith that they had built at Union.

If ever a father could have his dearest wish, it was granted to me, as I sat in that back room of the church: heart full of joy, tears brimming in my eyes, listening to the closest friends and relatives of my son and soon-to-be daugther-in-law speak of the work of Jesus in their lives. Truly John wrote: “I have no greater joy than to hear that my children are walking in the truth.” — 3 John 1:4

Thank you, Joshua and Kelsie, and thank you to all of your friends and relatives for so many kind and Christ-honoring words. Thank you, Debbie Le, Michelle Kuhlmann and Beckie Madson for slaving behind the scenes to make the rehearsal dinner a success. And thank you, Lord Jesus, for granting us new life and joy and making all this possible!