This year we broke from tradition and traveled to Louisiana to celebrate Thanksgiving with Tim and Rachel in their new home. I had not yet physically visited their house, so I was delighted that Rachel agreed to serve as hostess. It made travel a lot simpler for Daniel, David and Sarah (who all live in Tennessee, about 7 hours away).

Joshua and Kelsie (and, perforce, Benaiah and Rosie) stayed home in Idaho, since Kelsie is too near her due date to travel. We missed them greatly, but still managed to be festive and silly and (not least of all) thankful.

The highlight of the week came when Rachel brought out presents for us all, and insisted we open them all at once. My gift was a mug, and I puzzled out the implications.

David’s gift complimented him on being a great Uncle, and Sarah’s gift was a magnet proclaiming her an Aunt. Kathy received a Nana mug. Slowly, it dawned on us all — Rachel and Tim were announcing that they are expecting a baby! (Rachel had been wearing a special shirt that also trumpeted the good news, but she had craftily concealed it under a sweatshirt.)

I was stunned and overjoyed. I have been praying for several months that they would decide and be able to have a baby, but one learns to be patient in the grandchild game. Kathy and I don’t want to be those annoying parents who pressure their kids to have children before they are ready — that’s why we were praying, leaving it in God’s hands. What fun to hear this news a few days before Thanksgiving, to give the holiday some extra lustre.

As it turned out, Tim and Rachel had been hoarding their secret for some time, gleefully planning this great ‘reveal’ when we were gathered together. As soon as they had announced the joy to Tim’s side of the family, we joined them in cryptically communicating with Joshua and Kelsie. (Joshua and Kelsie had both dreamed that Rachel was pregnant, and so Tim sent a message to Josh, complimenting him on his gift of prophetic dreams.) It took only a few minutes before we heard back from Joshua: “About the dreams, would you like to clarify … ?” 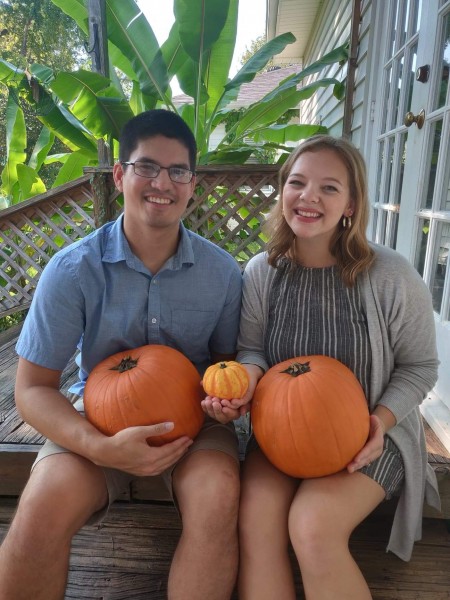 This was the picture they sent to Tim’s side of the family. Hannah figured it out right away.

It was very hard to keep it all under wraps until Daniel arrived, and opened his own gift, and heard the joyful news. One of the nice things about having a large, happy family is that everyone is very delighted when their siblings have children of their own. By June, Lord willing, I’ll be the proud Grandad of two new grandchildren, each with a name and gender and personality of their own! I can hardly wait to meet them!

Today Rachel told us that she heard the heartbeat of the new child. Kathy and I prayed for God’s blessing on this new member of our family, that He would show His love to this baby, and that he or she can grow safely in the womb and be delivered in good time and health. Even more, we pray that God will call this new soul into faith and relationship with Himself, adopting this baby into His family forever.

But the steadfast love of the Lord is from everlasting to everlasting on those who fear him, and his righteousness to children’s children, to those who keep his covenant and remember to do his commandments. — Psalm 103:17-18