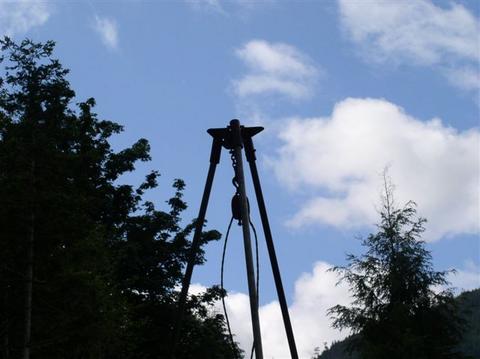 Today I went to work in my boxer shorts. Don’t worry, I won’t be posting a picture of my pasty white legs … some things just shouldn’t be visualized, even on the internet.

I had intended to dress a little more conservatively, but I couldn’t find any shorts in the bedroom. I had already slammed several cupboard doors in the bathroom, and I feared that any further noise would bring me to Kathy’s negative attention. I threw on a shirt from the bulging dirty-clothes hamper, velcro-ed on my sandals, and was out the door.

Even in Seattle, such attire would raise an eyebrow or two (even if the eyebrow was pierced) … but I do have an explanation. Well, sort of.

Over the Independence Day weekend our well stopped pumping. It had grumbled for some weeks … low pressure, failure to restart when we have power outages, that kind of passive-aggressive behavior. But for the last four years we have come to expect (at least when we have power) a reliable and plentiful source of clear, cold Duckabush water.

On Monday, in a flash of prescience, I took my shower early, and thus missed out on the subsequent outage. By the time my sweet wife made it to the shower, the water supply had become intermittent at best, and required a steady hand on the switch down at the pump house. (Sadly, my hand was less than steady, since I was still trying to figure out how to make the pump work.)

We called in a local well guy (I suppose he is actually called a “water system specialist” or something a little more impressive than ‘well guy’) … he made a brief call Monday night & concluded that they would need to ‘pull the pump’ (a non-trivial task, since our well is 220+ feet deep). By evening Tuesday, we heard the fateful news: our pump was cracked and would require replacement — $500 in parts alone, I fear.

As it turns out, we are very much used to running water. Without flushing toilets, working dishwashers or washing machines, without water from the tap, our household is slowly grinding to a halt. I’m only keeping it all together by reading the tips on unclutterer and on here and there on the internet. Rachel said to me last night, “I don’t think I’ll ever have clean pajamas again. (She’s prone to a bit of exaggeration, I’m afraid … I’ll bet she gets new pajamas for Christmas, at least!) We brush our teeth with water from a 2-liter bottle and we lug in scores of milk-jugs of water for the toilets which David flushes with wild abandon.

Once again, our faithful pool saves us … what luck that we have a huge reservoir of water just outside our back door! It doesn’t do for drinking water, but that is graciously provided by our faithful “foul-weather” friends and neighbors.

Sadly, we lack the one thing that separates civilized man from his savage counterpart: hot showers. A hot shower is very important to me … I think perhaps that is why I was born in this modern milieu in spite of my medieval mind-set. On Tuesday I had a series of job interviews and I wanted to be clean and reasonably fresh. So I had Joshua go down to the pump house Monday night and hold the control switch on while I took a shower. He amused himself by showing Rachel how it worked, turning it on and off with gleeful abandon, not realising the havoc that this would play with the shower temperature and pressure. (There was a certain poetic justice in this, since I had done much the same to Kathy.)

In the morning I stuck my head in the pool and (after a few minutes’ chipping ice out of my hair) declared myself reasonably clean and passably fresh. The interviews went OK … no one commented negatively on my personal hygiene, which is always a good sign in an interview.

The wily Kathy managed to wheedle a shower out of our “foul weather” neighbors (the Bringhams) — and there was much flushing of toilets by the children who missed such civilized niceties. 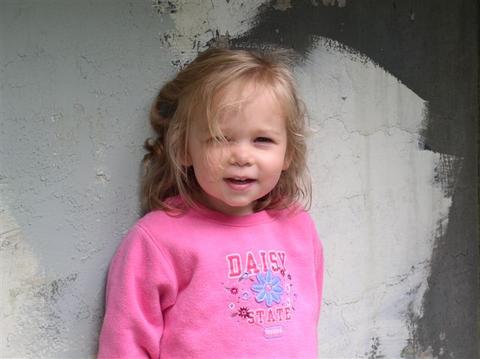 This little girl didn’t get a shower or a bath.

By Tuesday night the pump had been dismantled, with the vague promise of a new pump to be installed on Wednesday. Perhaps in dread of my incessant whining, Kathy solicitously arranged access to the nearby Wilderness Northwest Training Center shower through our neighbor and camp director, Jody Weed.

As more and more people flee the cities and seek to scratch out an existence in rural communities, there has grown up a need for the mentoring of urban tenderfeet, as we find ourselves dealing with arcane mysteries like “septic field maintenance” and “the safe and lawful operation of a chainsaw”. In a cooperative program with State and local governments, Jody was appointed as our benevolent guardian. He takes his mentoring duties seriously, and can be relied upon to steer us away from costly mistakes and dangerous practices. His casual oversight of our property is a source of frequent and considerable relief to me. Working in the city, I was unable to observe the progress of the water system repair or otherwise ensure that I ended up with a working well.

So I headed out this morning with my clothes in a knapsack, intending to shower at the nearby Training Center. Unfortunately, I am a bit absent-minded and habit-driven, especially before I’ve gulped my first Diet Coke of the day. Imagine the driver’s surprise when I boarded the bus in Poulsbo, still fetchingly attired in my sandals and boxer shorts! As it turns out, they have city ordinances against that sort of thing in this conservative Scandinavian bedroom community. How convenient that the State Police have a branch office directly adjacent to the Park ‘n Ride where I catch my bus!

What luck for me that one of my fellow passengers happened to be a lawyer for the American Civil Liberties Union (ACLU). With his masterful grasp of logic and political correctness, he convinced the bus driver and investigating police officer that they were infringing on my right to freely express myself and encouraged them to go pantless in support of my bold stance. The passengers all followed suit, showing that they were hip, tolerant people as well.

Or maybe that isn’t what happened. Truth be told, I did drive past the Camp facility, but remembered my undressed condition before I got to the foot of the valley. I turned my car around, enjoyed a hot shower with excellent water pressure, and made it to Poulsbo in time to catch the bus, fully clothed. (I was clothed, not the bus.)

I wonder if I could have pulled it off? This is a crazy town … people wear the strangest things. One guy that rides my bus, wears winter camouflage pants and swimming-goggle sunglasses pretty much every day, rain or shine. Another long-haired guy wears a full-length, dark green trenchcoat even in the warmest weather. I had two meetings today … it is probably best that I wore pants. Maybe I should adopt that as my new motto — “When in doubt, wear pants.” It’s catchy, succinct and achievable … I like it. 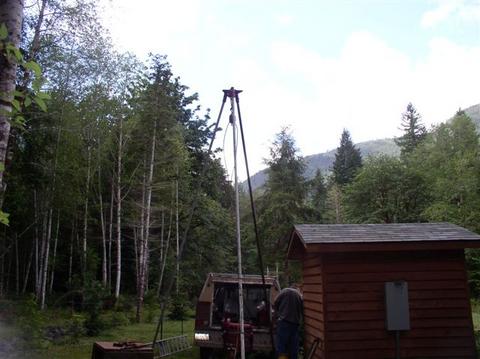 Later in the day I heard the good news … the well is repaired and Kathy has water again. No more scrubbing clothes on a washboard down at the river … her solidarity with the pioneer women is ended. It is probably just as well … we were getting tired of those cornmeal flatcakes and that dubious rabbit goulash.