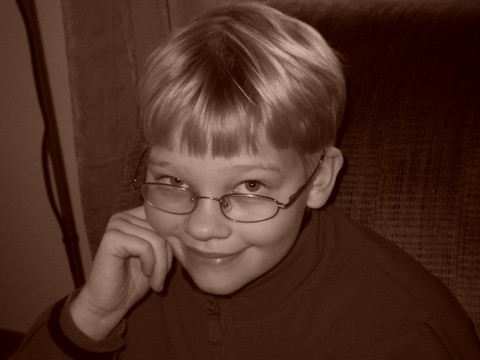 I think today a resigned acceptance of his stance as the Middle Child came over Daniel. He told me that his Special Day was on Wednesday, the middle of the week (a rather unfortunate day since we have church activities in the evening) and that it didn’t matter if Daddy started with the youngest or the oldest, either way he would be right there in the middle.

It is interesting to contemplate how birth order affects the children. Daniel is right, smack dab in the middle of the family with a brother and sister older than him and a brother and sister younger than him. Most of the time this is extraordinarily fun – he has a wealth of resources for play available to him. He can play difficult games of strategy and logic or he can drive Match Box cars around on the floor. He can tackle his big brother, using some real strength in the ‘fight’ or he can snuggle up on Big Blue with his little sister and read books. He can play with a group (if you define group as a rather small amount of people) of boys or girls.

On the other hand, it can be difficult to be in the middle. You aren’t the oldest – the first to do things, given responsibility and the chance to shine – and you aren’t the youngest – cute, amusing and precocious. What is left?

Thankfully Daniel does find many ways to shine as the middle child. Because of his placement in the family he is helpful with the younger two (easily playing with them) and still a fun peer to the older two. 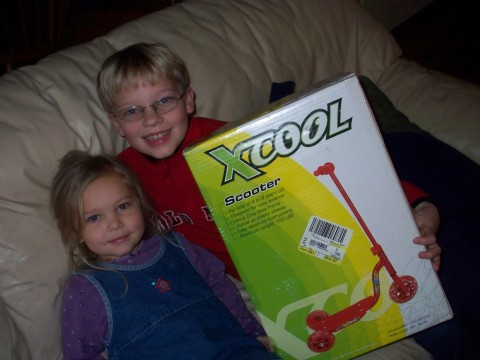 Here Daniel celebrates with Sarah over her new scooter.

Daniel brings many challenges to the family but many joys as well. We have begun a new study of Proverbs in our school time. My Bible reading plan goes through Proverbs every month. I decided there was so much meat in the chapters that I wanted to read them with the children, but I desired to find a way for the passages to come alive and be interesting. I came up with the simple idea of using part of our school time to go through each verse one by one – having the children take turns reading and explaining the Proverb aloud. Brilliant!

I make sure we each have the same version of the Bible (for simplicity sake) and have the children start with verse one and continue on through the chapter. I am pleased with how much the kids understand and how willing they are to spend a rather significant amount of time studying Proverbs. Daniel and I did a portion of a Proverbs devotional workbook last year. I had intended it to be something he did on his own but that didn’t prove to be successful. He had a hard time understanding the questions and how to find the answers in the Bible passage. It is remarkable to me how much he has improved in his comprehension and understanding in just a year’s time. One of my great desires for Daniel is that the wisdom found in the Bible (and especially Proverbs) would penetrate his heart and mind and that he would grow to be the “wise son [who] brings joy to his father.” Proverbs 15:20a. 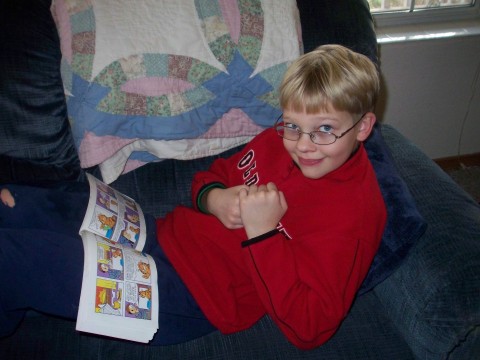 This, of course, is NOT a picture of our Bible reading time.

This has been a difficult year for Daniel in the area of friendships. His cousin moved to Norway, his best friend moved to Thailand, two other friends from church went to Africa for the year, and recently his good friend from co-op moved to Kentucky. That’s a lot of loss in a young boy’s life. Through it all, however, Daniel maintains a hopeful, cheerful spirit. He is an incredibly resilient boy in many ways. Already he has made some new friends in the homeschooling PE classes at the Y. I have no doubt he will find some fun companions for this year’s adventures.

He is our Middle Child and well do we love him.