Some friends on my homeschooling loop have encouraged me to start a photo journal for 2007. Here’s the article that sparked the idea: Project 365. Basically the concept is to try to capture a representation of the day in a single photo. â€œPerform photographic experiments. Take a photo of someone new you meet, something you ate for the first time, or something you just learned how to do. Take a photo of something that made you smile. And donâ€™t forget to take a photo of yourself at least one a month so you can remember how youâ€™ve changed too.â€

If possible, you would want to add a line or two about the photo to help explain the story behind the scenes. Nothing lengthy, just enough to trigger the memory.

I am a little bit intimidated about tackling a project that requires daily consistency and commitment. I am a great starter of projects, but not so great of a finisher, and so I make no guarantees that I will end up with 365 entries. Still, I think this might be a wonderful way to capture our year and to enhance our blogging.

I’m mulling over several ways to approach this photo journal. One of my SHS friends (the homeschooling e-mail loop that I’ve belonged to since 1999) is going to center her version of Project 365 on herself. She has another blog that chronicles that life of their family with pictures and stories. She sees the Project 365 as a chance to reflect on her life and it’s direction.

I have journals for each of the five children. I write in them very sporadically. Occasionally I have them nearby and capture a funny or tender moment, but more often journalling is a New Year’s resolution I never quite achieve. I have thought about designating a day of the week to each member of the family. With seven people in our family, it works out very tidily. Monday could be Joshua’s pictorial day, Tuesday Rachel’s and so on. Tim and I would take the weekends. This approach might add a burden to the project (limiting what pictures I can take and of whom) but how delightful to have a special day for each child and end up with a year of Mondays With Joshua, etc.

I found an article that poses 20 Questions to be answered with a photo. This would be a fun starting point or at least a source of some ideas to get the picture taking juices flowing.

It’s January 1st and a time of new beginnings.

Happy New Year!! We decided to stay home this year for New Year’s Eve. In years past we’ve celebrated with good friends out at the Duckabush. We play games, talk, eat WAY too much food, and toast in the new year. Last year our dear friends hosted a ‘white elephant exchange.’ Not only did they plan and coordinate the entire evening, they also provided all the gifts. The children were thrilled with all the presents and tickled with the ‘stealing’ of presents. The younger children had a difficult time grasping the idea and were a bit chagrined when someone would try to take their gift. 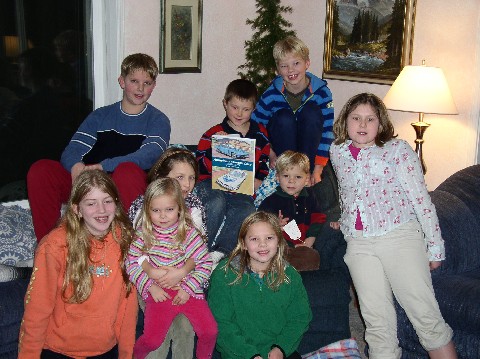 Some of our favorite Duckabush kids posing for a Christmas 2005 picture.

With New Year’s Eve falling on a Sunday this year it seemed a bit complicated to be away from home. We didn’t want to spend the last day of Tim’s vacation packing up from the Duckabush and driving home so we thought we’d enjoy a quiet evening alone. That was, until I got the urge to gather friends for a game night. This has very definitely been the Entertainment Christmas for our family. Most of our gifts have either been games or cd’s with a few movies thrown in among the bunch. Tim and I really want to make our home a fun place for the children and one of the joys of a big family is that there are lots of people with whom to play. Now that the children are growing older, they are able to play all sorts of different games (the days of only Sorry or Uno are over!!). 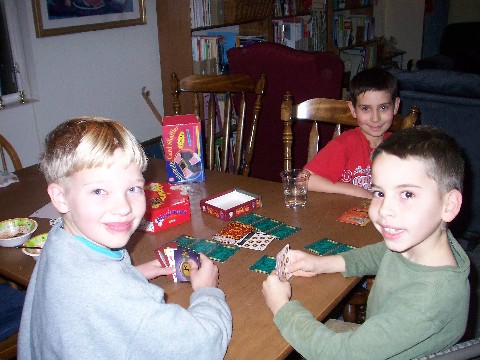 Daniel and some friends playing cards.

Any time he has an opportunity, Tim speaks highly of the way our parents made our childhood homes an open place for friends. We would like to cultivate that same welcoming, open atmosphere here at our home. 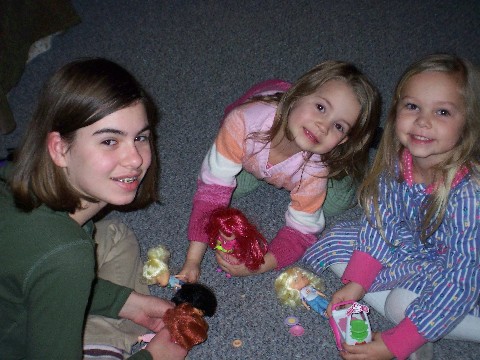 One of the older girls played so sweetly with the two four year olds.

We want to know the friends are children are making, the influences that are shaping their lives, and to have a say in how they are spending their time. We both have many fond memories of playing board games growing up as a family. One way we hope to encourage a strong family bond is to become a Game Playing Family (GPF).

There are so many amazing, creative, interesting games available today. Tim and I both did some game shopping for Christmas this year: Tim found treasures at his favorite game site Newspiel and I discovered a new place for smaller, less complicated games GameWright. When we realized one of our favorite games from this summer, Rat-a-Tat Cat, was produced by GameWright, I was eager to try out their other selections. 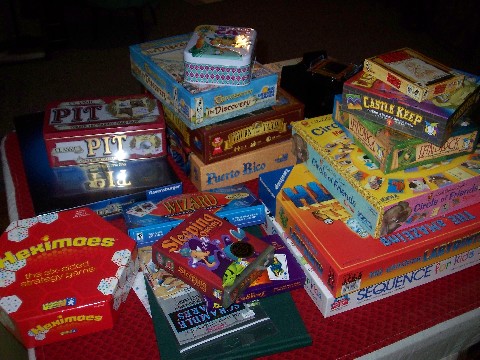 Look at that awesome stack of new games!!

In a totally unplanned twist of events, Tim’s parents also decided to invest in games this year. They blessed each of the children with a game for Christmas. Somehow (and I still can’t believe this all worked out) none of these games overlapped. Even the classic game that Tim’s sister gave us for Christmas (Pit) was one we didn’t have (but have long wanted). To complement this all, my aunt included a card shuffler in her Christmas box to us this year.

Tim’s parents shopped at a wonderful toy store in Tacoma, The Learning Sprout, and found games that were exactly age appropriate and interesting to both children and adult. No small feat!!

All of this leads up to our New Year’s Eve party. I guess our quiet evening home alone wasn’t to be. At some point on Saturday I got an overwhelming urge to invite people over for games on Sunday afternoon. Tim told me to ignore that little voice but finally consented to the inevitable. Two calls and a drop by visit later and we had confirmations from two families and a “maybe” from a third. I must say I do enjoy a good party (if only to provide an excuse to clean up the house).

The kids and Tim helped get the house ready for company. Tim’s parents dropped by after church and were dragged into a quick home improvement project. Thank you, Grandpa!!! We even had time to teach Grandma how to play one of our new games, Sleeping Queens. Grandma, of course, went straight for the Cake Queen and victory.

Tim made two delicious looking ice cream pies and I prepared a batch of Mesa Manna for pizza. 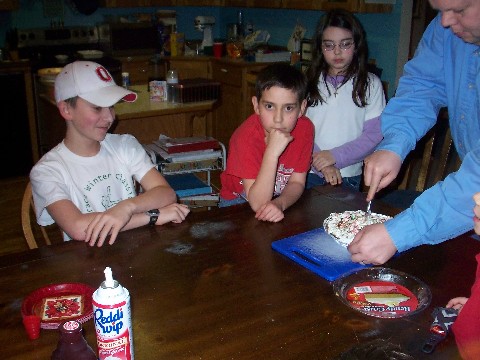 Our company came laden with yummy snacks–we had a huge bowl of bite size veggies, a big bag of mini peppers (which some of the children munched on like crackers), chips, pretzels, dip, etc. I made three pizzas which were almost entirely devoured. Tim brought out a big tin of chocolates we’ve been carting around as a “Just In Case” Christmas gift. Just in case, so and so brings by an unexpected gift, you have a lovely gift to give them in return. Ha!

Everyone had a great time. There were 13 children and 4 adults. Rachel said she played at least 10 games throughout the evening. 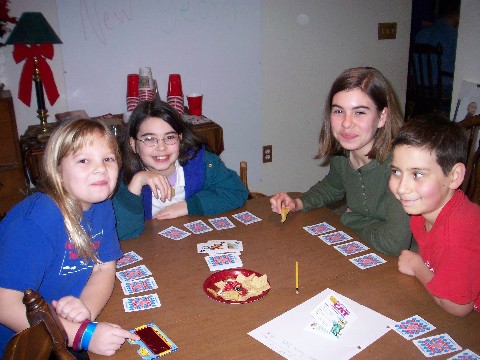 Rachel, the Card Shark, and some friends.

The boys split their time between running around chasing each other and playing board games. The adults and older boys played a long game of Settlers of Catan and a shorter one of Bang (another one of the new games). The entire group (except for baby Isaac) stayed up until midnight. We toasted the hour with Dixie cups of sparkling cider.

A very satisfactory New Year’s Eve–friends, games (both new and old favorites), yummy treats, some introspection and reflection, and farewells just after the midnight hour.

Do the Puyallup
Reunion Count Down
Socktoberfest