Some people go away on vacation and come home to find their home has been vandalized, robbed, or even destroyed. Those people have it easy.

We returned home from the airport and piled the suitcases by the front door, children staggering sleepily up the stairs or sitting dazed on the bottom step, until a passing Daddy can carry them off to bed. We started the standard triage process on the accumulated mail, and then discovered we were the victims of a heinous anti-crime. 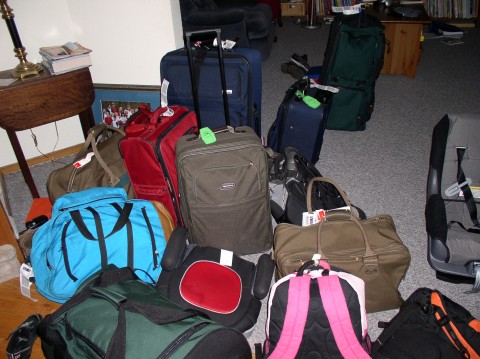 Thirteen checked pieces plus eight carry-on bags makes quite a pile for tomorrow!

Anti-crime has never really caught on. I first read about it in a Terry Pratchett book, or perhaps it was Douglas Adams — whoever it was, he gave a few examples:

Apparently the point of anti-crime is not just that a good deed be done, but rather that it be done in a way to produce maximum outrage or humiliation in the heart of the victim.

In any case, the ‘criminals’ used a variant of ‘breaking and decorating’ on us, and replaced our old, unattractive and barely-operable sinks with new, shiny sinks and faucets, leaving their jeering placards behind as evidence. As soon as we find out who it was, we’ll retaliate in kind, perhaps whitemailing them mercilessly … 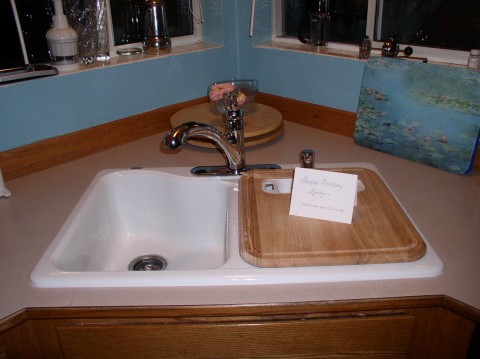 Kathy has long wanted a better faucet, especially since our old one had been making ominous screeching noises when we turned it on and off.

In any case, it is good to be home. 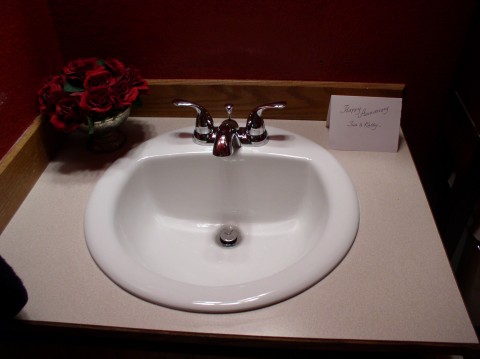 Even the little red bathroom was not deemed sacrosanct. You can imagine our outrage!

Tim (Kathy was too tired to write, and is, even now, nearly asleep in Cream Puff)

7 thoughts on “Victims of Anti-Crime”