After eight days away from our children, Kathy and I were agreed: it was time for them to come home. 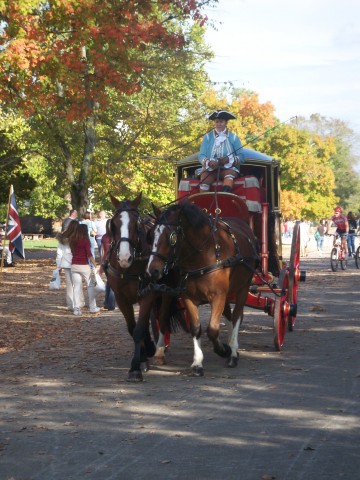 Too bad Grandma and Grandpa brought them home in the van — this way would have been more stylish.

We thoroughly enjoyed our break away from our duties as Mom, Dad, programmer and teacher, but as the days slipped away, our hearts returned to our little family. In short, we missed ‘em. 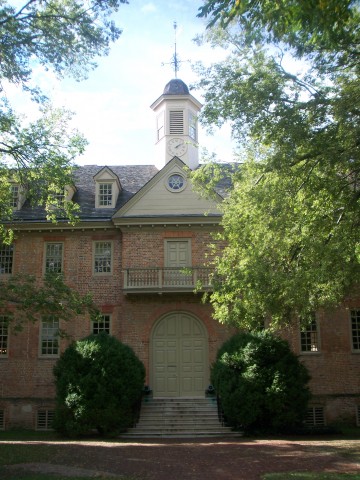 Brick paths and brick buildings under a cool October sky …

We are spiritually and relationally renewed; or if not, it wasn’t from a lack of trying. The church leadership retreat challenged the depth of our commitment to our Lord, and helped us to build some closer relationships with the staff and ministry leaders. Our trip to the east coast was a delightful mix of catching up with old friends and revisiting old haunts without feeling too er, old. 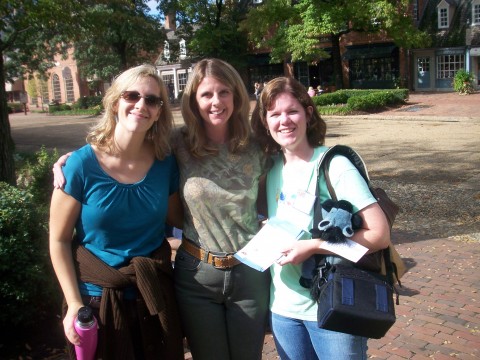 It was wonderful to connect with Rachel and to see several other good friends, like Emily and Dave.

I had hoped for a little more time for Kathy and I to spend alone, but (in retrospect), I think the weekend was a perfect mix of unhurried time with friends while still leaving some ‘down time’ for Kathy and I to be alone together. 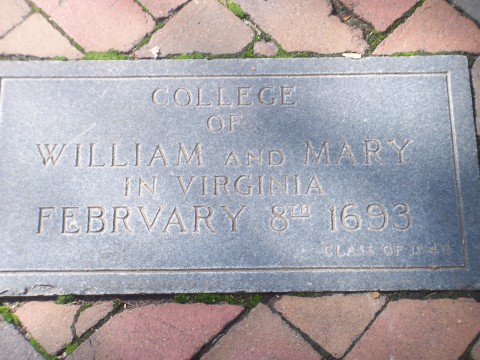 One thing I always liked about W&M was the reassuring fact that nearly 300 years’ worth of students had attended and (apparently) survived beyond their college years.

Kathy and I were graduated from the College of William and Mary, one of the nation’s oldest colleges. Located in Williamsburg, Virginia, William and Mary was the first U.S. college to become a University (offering a graduate degree program in 1779). Nestled up against the restored historic district of Colonial Williamsburg, and just a short drive from Jamestown, the College enjoys a rich heritage and historic charm that is well appreciated by many students and their families. 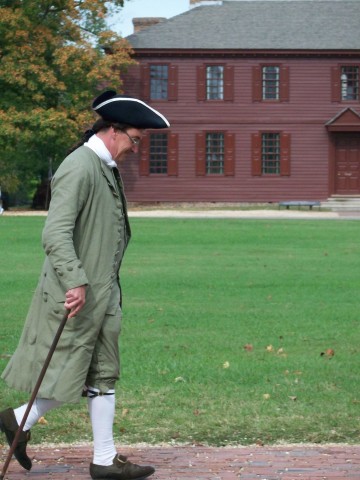 It is always fun to walk around Colonial Williamsburg and interact with the costumed actors.

I first attended the College in the Fall of 1983, taking advantage of a full Army R.O.T.C. scholarship. After two years of playing wargames and frisbee (while attending only about 40% of my classes), the Army decided that my lackluster grades did not fill them with confidence that I would be fit, in spite of my oath, “to protect the Constitution of the United States against enemies, foreign or domestic.” In the summer of 1985 I was informed that the scholarship was no longer in effect, and so began a hiatus from school while I scrabbled to earn the money to return. Eventually I was required to pay back all the money they had spent on me, having been found in breach of contract as a result of my poor grades. 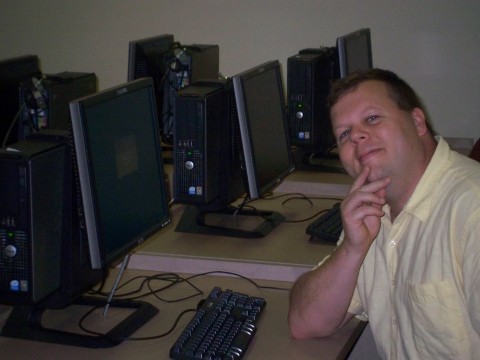 After working for the Department of Agriculture for a year or so, it became evident that the best way for me to repay the money I owed while still earning enough to return to college was to join the Army as an enlisted man. At the time, the G.I. Bill and Army College Fund were generous enough for me to serve a three-year stint and ‘earn’ funds sufficient to finish school. My parents generously helped me to pay off my debt to the Army, and I signed up for a three-year enlistment as a Chaplain’s Assistant, which turned out to be just the thing I needed to grow up a little. 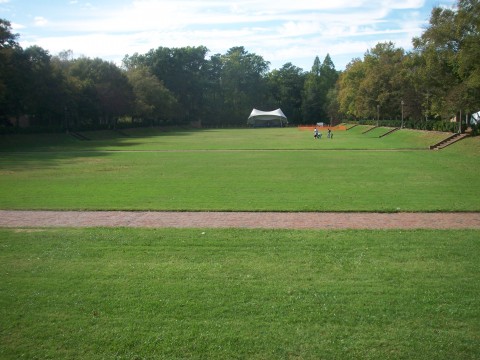 Many a game of Ultimate Frisbee was played in these Sunken Gardens.

In 1989 I returned to the College of William and Mary as a sophomore (again). By this time Kathy had transferred in from a school near Richmond, and began attending Inter-Varsity Christian Fellowship (IVCF) and Campus Crusade for Christ, where I quickly noticed her. We became acquainted during a Spring Break work project through IVCF and Habitat for Humanity, as we worked to build homes for people whose homes were destroyed by Hurricane Hugo in 1989. 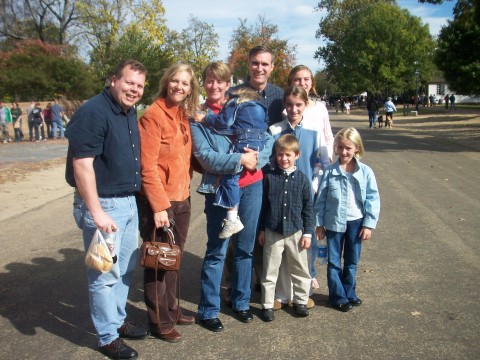 Jodi and Alan and their delightful family

At the end of the week, I drove Kathy and her friend, Jodi, home from South Carolina, since all three of us needed to be back in Virginia a day earlier than the rest of the group. After we counseled Kathy’s friend on her love life (she met her future husband, Alan, during the same week-long trip) and Jodi fell into an exhausted slumber, Kathy and I talked and laughed the rest of the ride home. As we crossed the border between North Carolina and Virginia, I realized that I was beginning to fall in love with her. 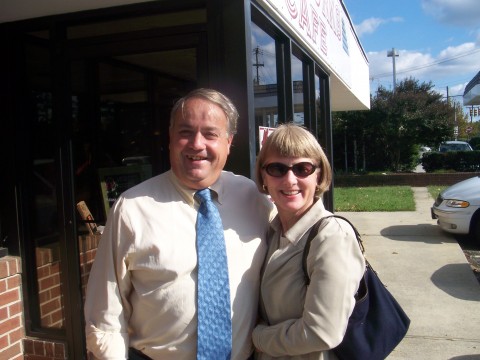 It was great to breakfast with the Purks, who encouraged and mentored us both as individual followers of Jesus and as a couple, heading for marriage.

Kathy and I spent some very happy years in school together, and we greatly enjoyed the opportunity to renew our acquaintance with a few of the local landmarks. 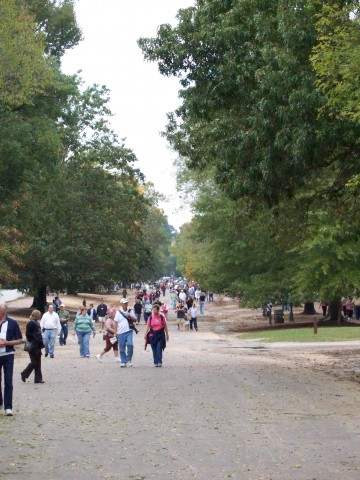 Extending from the Wren building at the tip of campus through the historic district, Duke of Gloucester Street (aka Dog Street) serves as the preferred promenade for students and tourists alike. 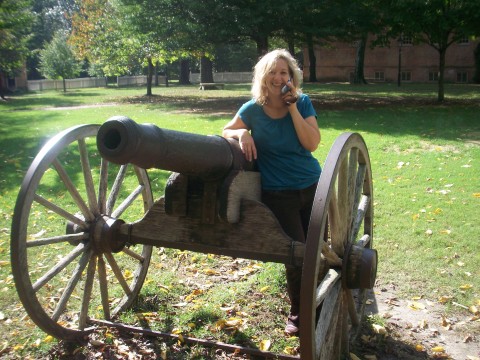 Kathy’s parents also attended William and Mary, as did my brother and his wife. Kathy enjoyed a quick chat with her Dad while waiting for the redcoats. 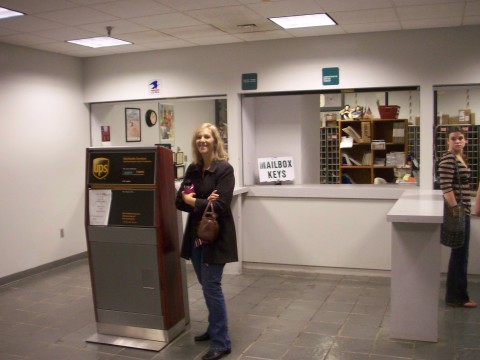 Kathy waits for a package from home …

Kathy and I never really ‘dated’, per se, but moved quickly into an intimate friendship that avoided some of the games that people play as they try to gauge the heart of their beloved. While we served on the Habitat for Humanity work project, our Inter-Varsity leaders asked us to write 3×5 ‘care cards’ of encouragement to the other members on the team, a practice which was very effective in building us into a more cohesive team. Returning to campus after the project, Kathy and I kept the practice alive, although it soon devolved into a way for just the two of us to woo each other in words. Postage at the time for on-campus mail was free, and the kindly workers would distribute new mail in our boxes three or four times a day. 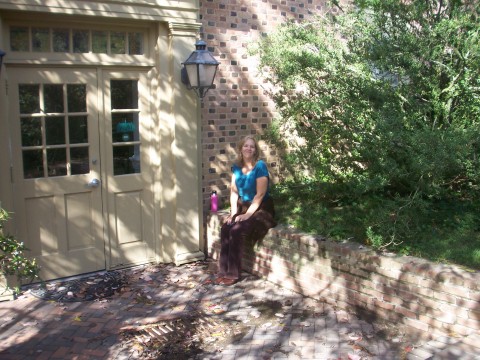 Silly Kathy, doesn’t she know the Campus Post Office has moved to the new Campus Center?

We wrote hundreds (maybe thousands) of cards to each other, three or four at a time, bundled into an envelope for privacy and posted through campus mail in the basement of the Old Dominion dormitory. We quickly attracted the mail handlers’ attention and became a mascot for those who approved of young lovers — our mail was always sorted and placed in our boxes with the utmost in efficiency and courtesy. We found reasons to pass by the post office three or four times a day, and were rarely disappointed, as we shared little 3×5 slices of our hearts in a variety of pastel colors.

One of the most romantic spots on campus was the little bridge over Crim Dell. As legend has it, kissing a date on this bridge results in a future marriage with that person — Kathy and I were careful to preserve the legend … on several occasions. 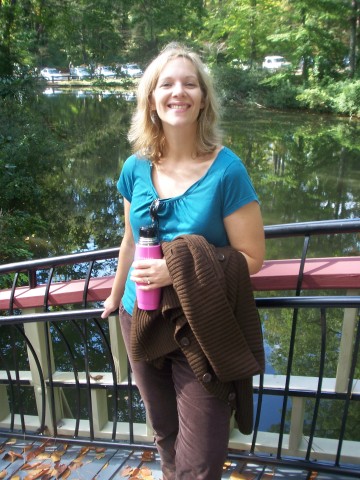 Life in college isn’t all roses, as everyone knows. Sometimes classes were hard; paper and exam deadlines seemed to come pretty fast and furious at times. I remember on several occasions being rather stressed-out, especially the first year back at school after four years away. Once I met Kathy, though, I walked around campus with a sharp eye, watching for a smiling face that brightened even the worst of days. 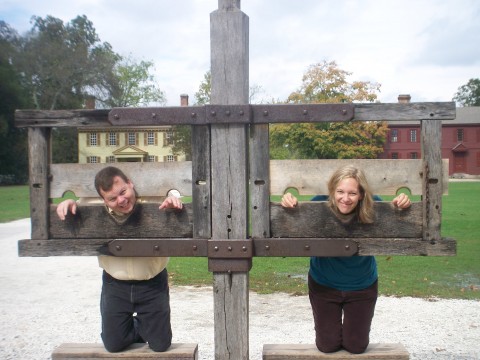 Some of those professors get downright testy when you skip their classes.

Whenever our schedule permitted, we used to meet at the Sundial, which stood near the library at a crossroads of paths among some of the academic buildings on ‘new’ campus. There were many other semi-secret meeting spots whose names still bring a smile to my lips, including the Phoenix, the Hippopotamus Stapler, and Oliver. 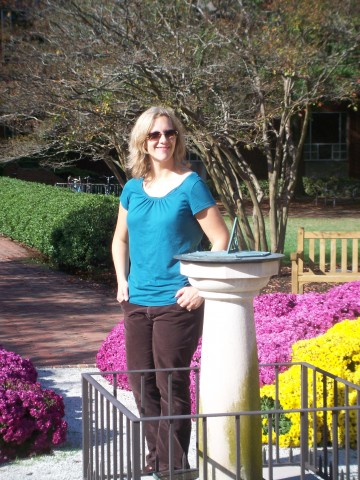 I’d better not leave this cute girl waiting long, or she’ll be snapped up.

Looking back over the years, I’m filled with a sense of tremendous gratitude for God’s sovereign hand and His love and kindness for us both. In spite of the squandering of my scholarship, God gave me a second chance at college, and threw in true love with Kathy, just because He can. Whenever I feel that I’m going through a hard stretch in life, and it seems God has abandoned me, I remember what good things He has given me, when my life seemed dark and grim — it helps me to hold on and wait for His goodness and grace.