I took the day off today, because my brother Torpid was in town. He e-mailed me about a month ago, mentioning that he would be in the area, and suggested that I attend him on an adventure. “I’m looking at property down near Olympia, and I thought you might want to come along,” he wrote.

Editor’s Note: My brother actually has another name, but I started calling him ‘Torpid’ in this post, and the name seemed to fit, so I think I’ll stick with it. 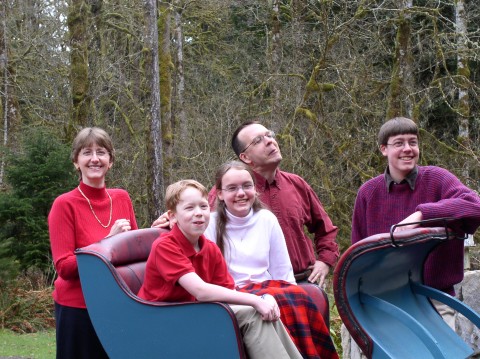 You can see how ‘normal’ he is in the context of his own family.

Still, the last time I accompanied him on a property quest, he fell into a small river. You just can’t buy that kind of entertainment — you have to take it as it comes. As a loyal and loving brother, I’ve mocked and heckled him about that for years — I wasn’t about to miss out on a chance to renew the fun. 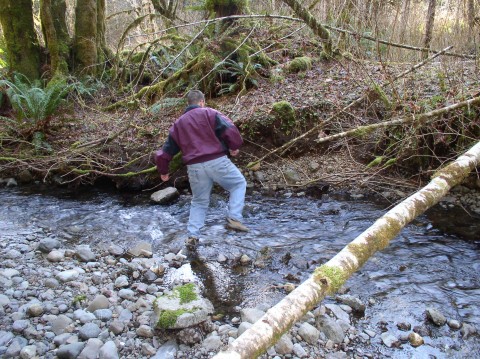 Too bad my camera wouldn’t take a series of pictures in succession, but here is what he looked like just before he fell in.

My brother agreed to pick me up around 9, so I could sleep in a little and still be ready to go. I figured I’d get up around 8, shower, make myself breakfast, pack a lunch for our travels, and be ready when he arrived. I nipped downstairs in my boxers to see “the lay of the land” and was immediately sucked into helping Kathy write a homework assignment for one of the classes she teaches at the local homeschool co-op.

At 8:43, Kathy finally released me to go shower. “That stinker Torpid will probably come early, too,” I predicted as I ran for the stairs.

“Uncle Torpid is here!” chorused several of the children, gleefully on cue.

We still managed to leave around 9, but it took us quite some time to get going on our ‘adventure’. First Torpid stopped at 7-Eleven to top off his Ultra, Super, Bigger-Than-Big Gulp. (My brother knows the latitude and longitude of all 7-Eleven stores in Western Washington, within a 10-meter variance, even though it has been a couple of years since he lived here.) Next he wanted a bagel at Panera’s. My brother is incapable of driving past a Panera’s store; he visibly salivates, which is a little disconcerting for the unprepared passenger. “How ’bout we stop for a bagel,” I suggested, dabbing at his chin with a napkin. 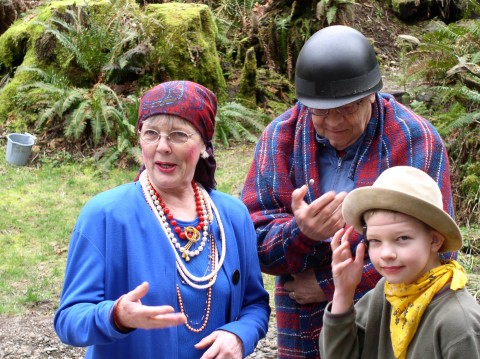 Some say my brother does pretty well in the ‘normal’ department, considering some of the other members of the family tree.

Then Torpid wanted to run a series of errands, ranging from Target to the PX on a nearby military base. It was the better part of two hours before we were finally on our way.

“Say, where’s that clear plastic folder with all the addresses of the properties I want to visit,” Torpid asked.

About a half-hour later, we were back on the road. As it turned out, the folder had been left on our coffee table. Exchanging baleful glances and casting blame on each other as best we could, we headed out for the first address on the list.

We got on the highway, and drove, and drove. And then we drove some more.

“Say, is this property you’re looking for, even in Washington?” I asked, plaintively. I suddenly remembered that my brother values his privacy and doesn’t like living cheek-by-jowl with the local peasantry. Eventually, we found the first tract of land, right on a major road. It had a few nice cedar trees, but was mostly swamp, and the noise from the passing traffic was pretty loud.

“I’m underwhelmed,” said Torpid, as we drove away. I had to agree, especially since he had failed to live up to my expectations in the ‘falling-into-the-swamp’ department. He wouldn’t even go near the swamp, and refused to let me hold the camera, for good measure. It is pretty ugly when brothers can’t even trust each other. 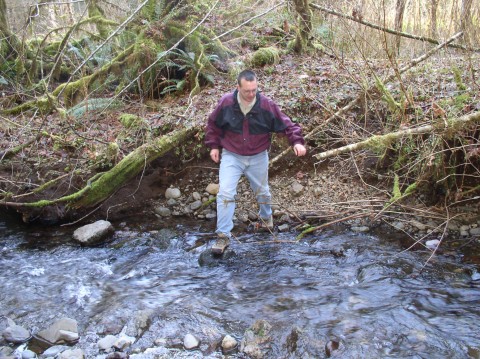 “Sure, I think that stone will hold your weight!”

One of the properties was nearly in Oregon. We saw lots of evidence of the flood damage that the Chehalis and Centralia areas had suffered, and my brother was hoping for property up on the hillside a bit. The plot of land we eventually found was down in the bottom of the valley, alongside a promising creek, and my spirits soared. “Let’s go down a little closer to the creek,” I urged, casually. “Say, are those fruit trees, down there, right by the edge of the water?”

Unfortunately, Torpid is a lot smarter than he looks, which isn’t saying much. He dismissed the land with only a cursory glance. “I don’t want land with so much standing water,” he snapped. “And stop trying to take my camera!” Sometimes older brothers can be very uncooperative.

There was a fourth property, which involved a ‘shortcut’ through the wilds of Grays Harbor County. I navigated, holding the map and peering at it from time to time, just for the look of the thing. “Let’s see, we’ll want to take the next right, and then a left.” Knowing how easily Torpid gets lost, and well aware of my brother’s capricious nature, I tried to take a page from scripture:

Because the Sovereign LORD helps me, I will not be disgraced. Therefore have I set my face like flint, and I know I will not be put to shame. — Isaiah 50:7

“We must set our faces like flint, and not turn at the next left, but shall bear, rather, to the right,” I intoned portentously.

Torpid pounced on this opportunity to mock me. “Why flint?” he challenged. “Flint is actually quite brittle. How ’bout soapstone?” We argued for some time about this. I suggested we set our faces like granite or maybe even basalt, but he wasn’t having any. Eventually, we agreed to disagree on the relative position of various minerals on Moh’s scale of hardness. We determined that we could set our faces like a hard crust of bread. “We shall set our faces like croutons,” Torpid announced, always trying to upstage me. 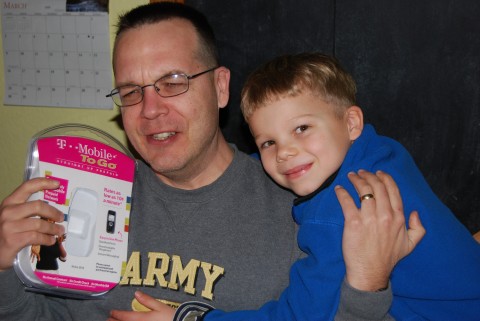 A face set like a crouton, but David still likes him.

The last property could not be found. We drove back and forth, but to no avail. Finally, we headed for home. Stopping off (of course) at Panera’s (this time for sandwiches), we made a quick detour to Cabela’s, a very cool outfitter store along the way home.

Considering how fruitless our search was (and how futile, hence the title, “An Exercise in Fruitility”), it was a surprisingly fun day. “Sometimes, it helps to know what you don’t want,” opined my brother.

Back at home, we had a lot of fun watching Torpid try to activate his new prepaid phone. We all gathered ’round and shouted encouraging remarks to help him through the voice-activated automated menus. “Swahili!” we chorused, when it asked him what language he spoke. “Seven, four, thirty-one, eight, ninety-two,” we shouted when they prompted him for his handset identifier. It was a jolly time for all of us. 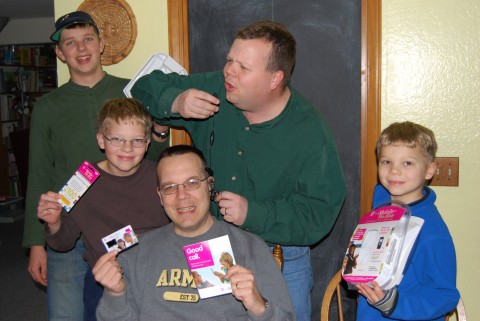 We were a big help in activating the new phone.

Eventually he cut short the frivolity and headed off. Hopefully he’ll forget how obnoxious we are and come to church with us on Sunday.

3 thoughts on “An Exercise in Fruitility”