We had dinner tonight at our pastor’s home, farewelling one of our elders (and his family) who is moving away. We talked of many things, enjoyed a delicious meal, and prayed over the family. It was a lovely evening, albeit bittersweet.

I had occasion to speak with one of my friends about many silly things, including this icebreaker personality question:

“If you had to smell like a vegetable, which would you choose?”

Loyal to my recent horticultural efforts, I chose the tomato (yes, I know that some misguided folk think the tomato is a fruit, in defiance of the Supreme Court*), while Kathy chose pumpkin. Other interesting choices were rhubarb and celery — I’m not sure what that reveals about the personalities who chose those vegetables, but it can’t be good. 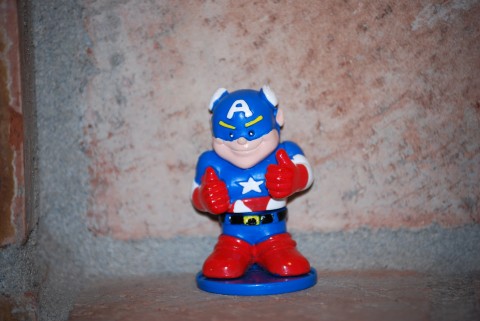 Captain America tries to put a good face on it, but you can see he’s one cigarette from a firing squad.

As our discourse wandered, my friend admitted that his obsessive-compulsive nature extends its tentacles deeply into his life. Observing a Super Heroes game that his son brought to the party, he confided that, in the unhappy event that one of the game pieces were lost, he would have to throw away the whole game, since any replacement pieces would not fully match.

Naturally, I spent the rest of the evening stealing pieces and hiding them about my person. I managed to leave the party with Captain America still in my possession. 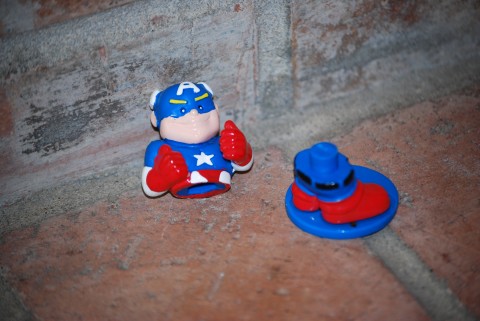 Don’t make us get rough …

So, Mr. L, if you ever want to see the good Captain back in his box, both halves attached properly, please leave a jar of Nutella in the Church Library, behind the Veggie Tales videos.

*The U.S. Supreme Court settled the controversy in 1893 by declaring that the tomato is a vegetable, based on the popular definition that classifies vegetables by use, that they are generally served with dinner and not dessert (Nix v. Hedden (149 U.S. 304)).