Last Saturday was a big day for our two oldest swimmers, as they celebrated the end of the swim season and their first year as Swim Team members. The local YMCA offers swimming classes, and (for those who take it a bit more seriously) a swim team, separated into A, B and C sub-teams. Joshua started in November, as a ‘B’ team swimmer, and Rachel followed in December, qualifying for ‘C’ team. 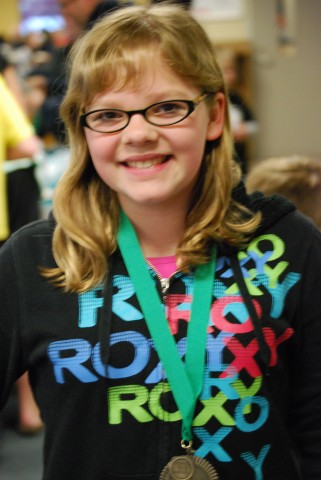 Rachel found swim team to be very challenging at first, but has overcome, and now enjoys it.

The Swim Team Sleepover was held at the Y, and included a meal, an award ceremony, and many games and activities. Kathy and the older two stayed until midnight, while the younger three and I made our exit after the ceremony (and the meal). 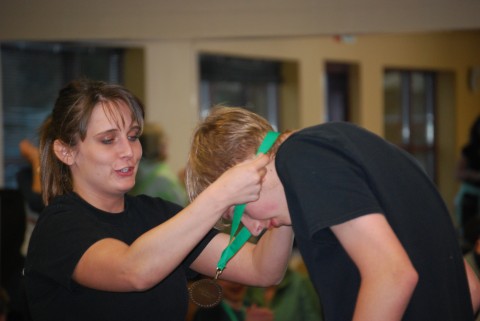 Joshua nearly had to go down on one knee to receive his medal. He towers over the landscape, these days.

Joshua and Rachel were both honored with medals for participation, and Joshua was given the ‘Golden Goggles Award’ for being the ‘Best Male All-Round Swimmer’. As the coach commented, Joshua’s discipline, commitment and willingness to give 100% at practices, distinguished him among the others and he was singled out for the coveted Golden Goggle award. 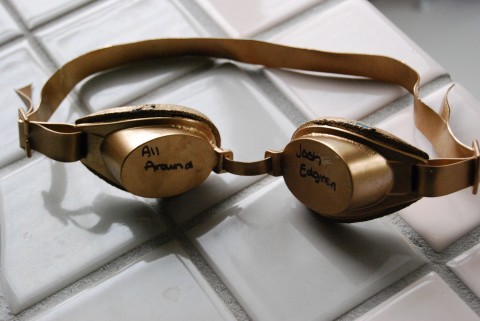 As it turned out, the ‘gold’ was spray paint, but this award is none-the-less cherished.

I was very proud of him, and of the significant effort he has invested into the team, with three weeknight practices each week, and additional swimming time on Tuesday and Thursday afternoons. Joshua and Rachel have both worked hard to improve their swimming skills and physical fitness, and they are an inspiration to their parents in the areas of discipline and ‘stick-to-it-iveness’.

Earlier that same day, Joshua played the role of Duke Orsino in an adaptation of Twelfth Night, performed by a group of players from our homeschool co-op. As he rattled off line after line of Shakespearean verse, I couldn’t help wonder to myself: “Where did this versatile man-child come from?” 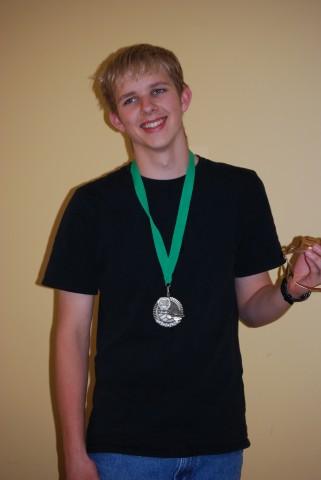 I remember when this boy was a pipsqueak. Now he gathers honor by the bushel.

Kathy and I shake our heads a lot, watching our children surpass us in a variety of ways. “I didn’t teach them that,” I’ll confide to Kathy. “Me neither,” she’ll agree. But for all their discipline and accomplishments, I think the thing that makes me proudest is that each of my children, to one extent or another, has given their heart to Jesus and is working hard to be a worthy and devoted disciple.

As the apostle John said in his third letter: “I have no greater joy than to hear that my children are walking in the truth. ”

8 thoughts on “The Golden Goggles”