A few days ago, I wrote a quick blog about Daniel and his passion for Diamond Push-ups. Who knew that in a few short days, these words would come home to haunt me?

It all started with a phone message from our AWANA Commander.

“Hey, Tim, I’m in Anchorage. You’re on your own,” Jimmy chortled remorselessly into my voice mailbox.

This is the kind of leadership and support I get from our fearless Commander. Other, more fortunate AWANA T&T Directors probably enjoy thoughtful mentoring and compassionate direction from their Commanders, but mine jets off to boondoggle in Alaska at a moment’s notice, leaving me to flounder alone.* 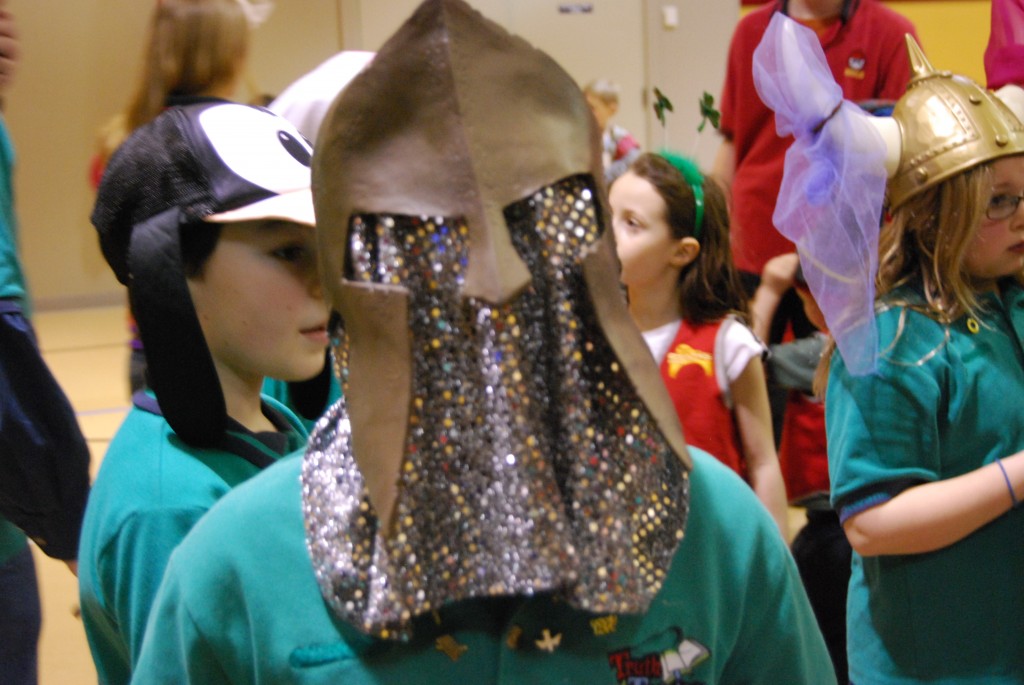 And flounder I did. I forgot to open the Cubby room, and didn’t turn on their heat until almost too late. I didn’t pray with the other workers, and I barely remembered to pick flag-bearers for the Assembly, which I convened a full minute late. I stumbled over the words in the pledge to the AWANA flag, but finally we arrived at the ‘Singing of the AWANA Song’, my favorite part of the Assembly. 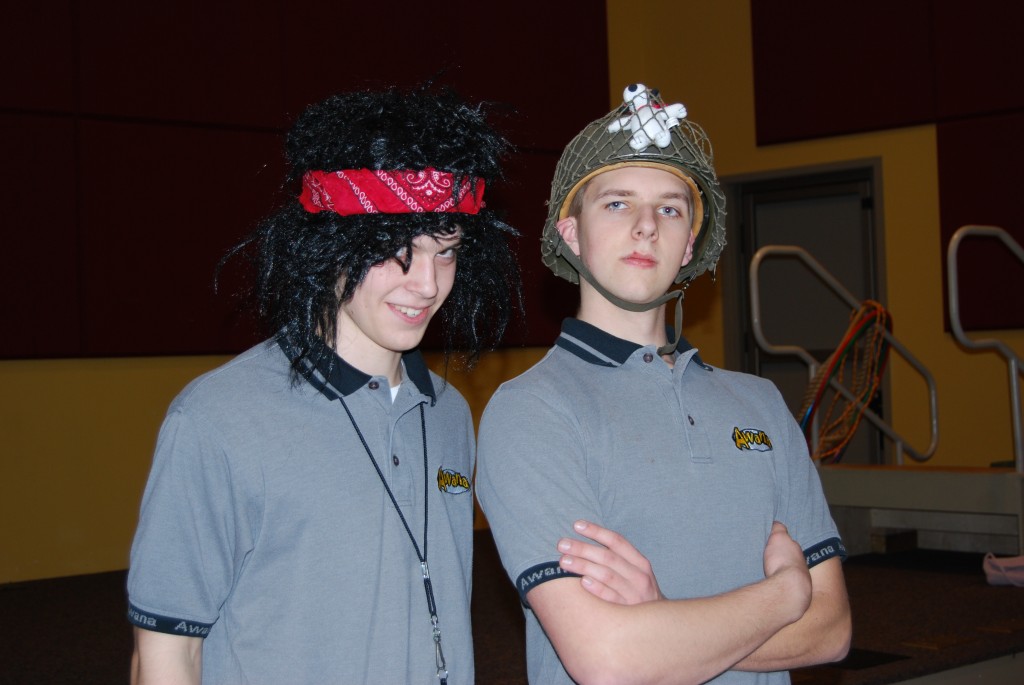 Nate and Josh cut a dashing figure in their Crazy Hats.

When I was in the Army, I discovered that I had a loud voice, especially when lifted in song. Maybe it was a legacy from playing the trumpet for four years in Junior High (no, I didn’t spend four years in Junior High, it was only mostly over my Junior High period), or perhaps it was a gifting from God, knowing that I was destined to be the father of five children — but for whatever reason, I can be very loud. I like to think that I am setting a good example by putting my heart into singing, especially at church. (Except that we never sing the hymn about the ‘C-130′s, rolling down the strip’. I keep waiting for it, but our worship pastor doesn’t seem able to work it in.)

And so, when I sing the AWANA song, I try to drown out all the other kids and leaders (and I often nearly succeed). This week, I challenged them to a sing-off: “If you can sing louder than me, I’ll do pushups, otherwise, you will.” I chose Nate (who had always before been trustworthy) to be the judge.

The kids blew me out of the water. I could barely hear myself sing — even standing on tiptoe, bellowing into Nate’s ear, I think the kids were still louder. 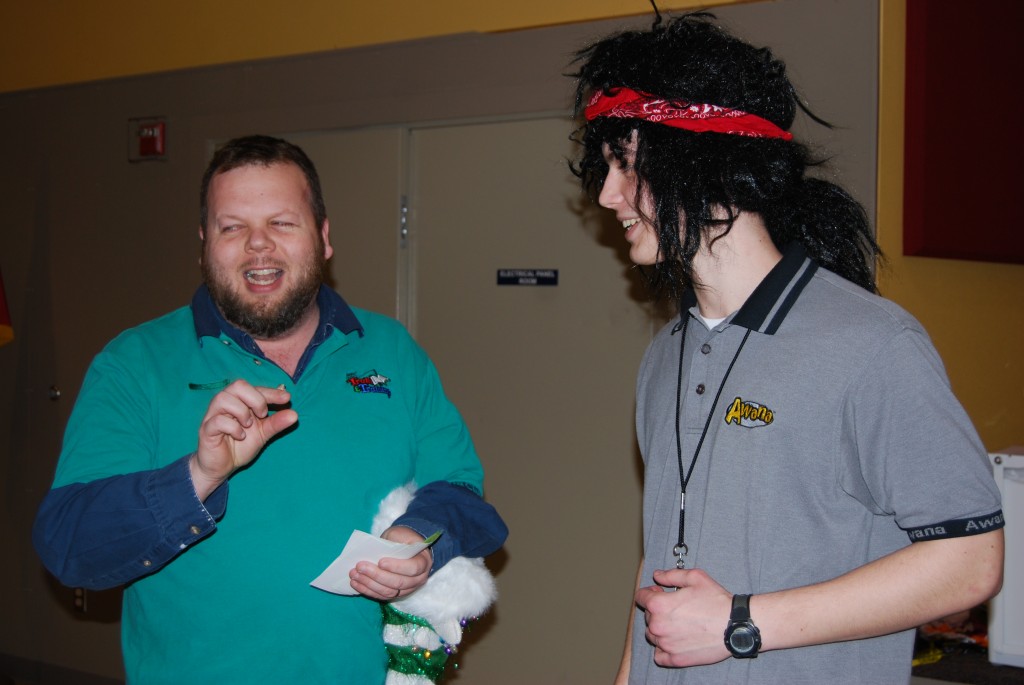 As it turned out, Nate was immune to my crafty bribery attempt, and insisted that the kids "were just a little bit louder" than I was.

So I did pushups. In retrospect, maybe I should have done a few with Daniel in the past couple of weeks — it was embarrassingly difficult for me to pump out ten measly pushups. 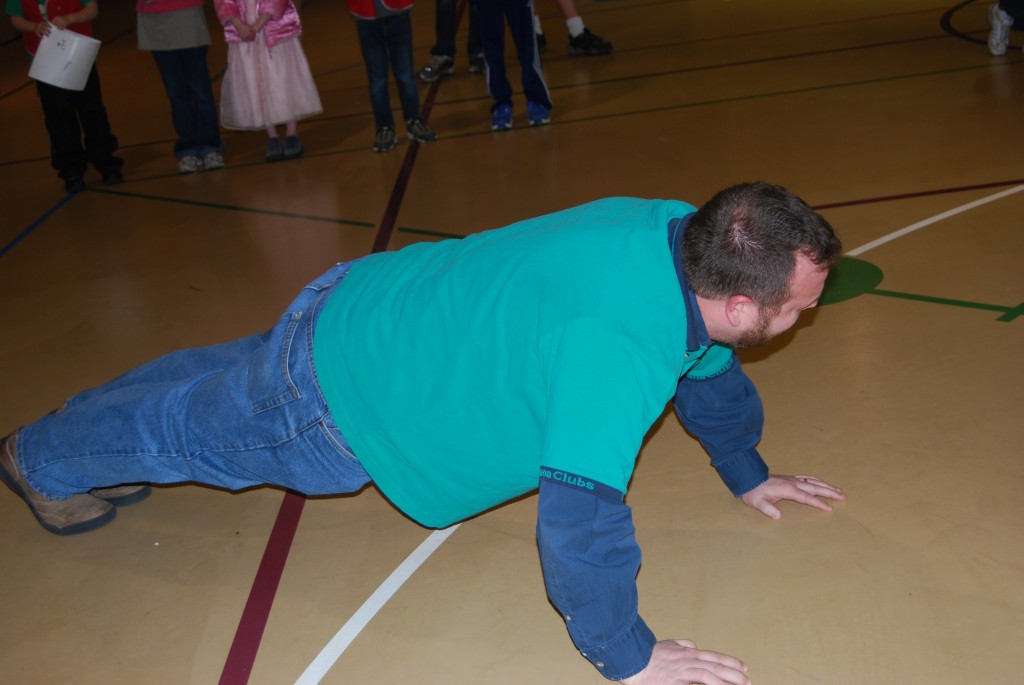 My drill sergeant would not have been proud, this day.

I must be getting old. Maybe next week, I will challenge them one team at a time. I’ll bet I can drown out that sissy green team any day of the week.

Whatever happens, it has to be better than getting a pie in the face.

* The remarks about my AWANA Commander are pretty much all fabrications. Jimmy is actually a very godly and conscientious man, who does his best to rein me in and to minister to my leaders in spite of my abrasive personality. He travels to Alaska because he has to, and it is no boondoggle. It was just more fun to malign him.