This was a very strange day at work. My employer has decided to stuff an extra 60 people into the office building floor where I work, and so we were all told to box up our stuff and get ready for the corporate equivalent of a Fruit Basket Upset. When the dust settles, I will occupy a somewhat smaller cubicle on the northwest side of the building, rather than the northeast side which I have occupied for the last seven or eight years.

Ordinarily, the only time (at work) that you hear people putting stuff in boxes is if they have been laid off, or are quitting. It is a sound full of negative emotional impact, especially if you’ve ever been laid off (which I have) or worked for a small company which was bought out or which closed its doors (which I haven’t). So, all day long I kept hearing the sound of people packing and would subconsciously tense, before remembering to tell myself that it was only a move. Modular office furniture is a perfect choice if you need to move or relocate rather often.

Around four p.m., the moving guys showed up, and began hauling away the belongings of those who had already left for the day. I tried to look alert and actively productive, for fear of being mistaken for furniture, and hauled away to some dark storage closet. As I was leaving, I decided to take a quick ‘cubie’ (less narcissistic than a ‘selfie’) to remember the otherwise insignificant beige cloth-covered box in which I have spent so many of my waking hours, since we moved upstairs in 2007 or so. 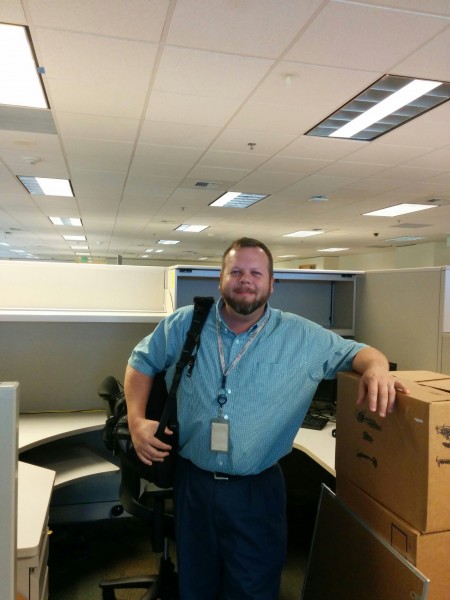 I was able to put all my junk in four boxes, which I thought was pretty good.

I can’t say I’ll miss that cube. It faced onto a hallway leading to a high-trafficked conference room, and I was constantly being disturbed by the comings and goings of people with nothing to do but stand around outside conference rooms, conferring noisily. I can’t wait to move into my (admittedly-smaller) digs, where I’ll be on a cul-de-sac that is en route to nowhere (hopefully not a metaphor for my career).

One thought on “The Sound of Change”