This Fall has offered many exciting opportunities for David, as he embarks on his High School career. One such opportunity has been to follow in his older brothers’ footsteps, participating in the Naval Junior Reserve Officer’s Training Corps (ROTC) program at a nearby high school. 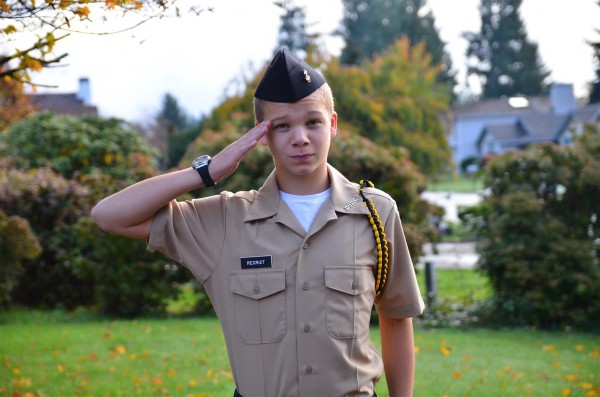 It has been fascinating for me to watch him learning to march, how to wear a uniform, and to memorize the Orders of the Sentry. Even learning how to dress in ‘business casual’ attire (as they do sometimes when they don’t wear their uniform) is such a valuable skill for a young man. We are very proud of how David is excelling in the program. 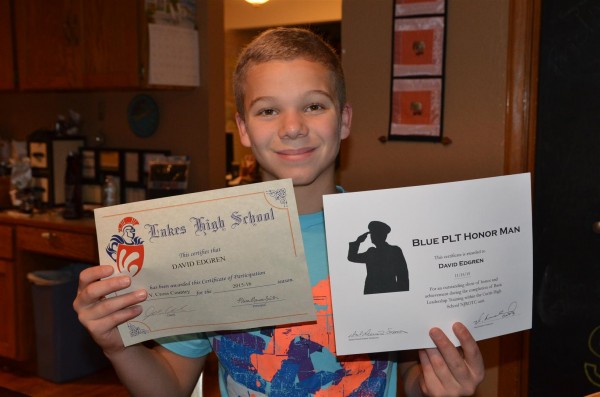 Participating in NJROTC and running Cross Country (at two different high schools) in the same semester has been rather grueling for David.

Whenever they can get the local military bases to cooperate, the Junior ROTC program sends all the new recruits away to a Basic Leadership Training (BLT) weekend, where they are given the chance to learn some simple soldiering skills and to be shouted at by Marine instructors. This last weekend was BLT for David and the other recruits of his class; of course, it rained hard the entire weekend.

“These are the future leaders of the Cadet Corps,” predicted the Colonel, as David and a few others were promoted to E-2.

Cadet families were invited to attend an award ceremony when the kids returned from BLT — David received a participation award, a swim qualification, and (most prestigious) Honor Man for his platoon. As a result of his exceptional conduct and achievement, David was promoted to Seaman Apprentice (E-2), skipping over the E-1 rank. Next time he wears his uniform, he’ll have two new ribbons and a shiny medal pinned to his chest, in addition to the ribbon for being Cadet of the Month. 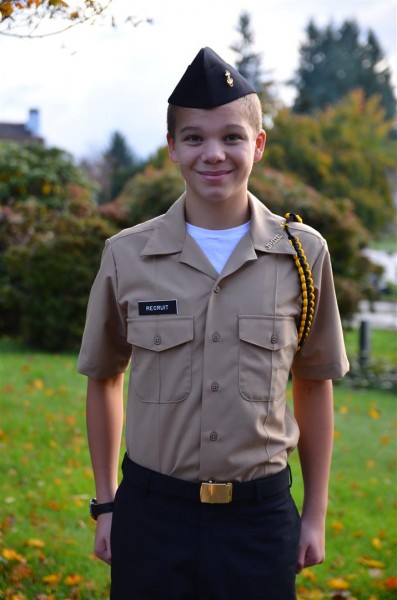 This photo was taken even before David got his first ribbon.

It is remarkable to see how quickly David has acquired military bearing, and it warms my heart to hear him address other adults respectfully as “Sir” and “Ma’am”. I am excited to see how military skills and disciplines will open doors of opportunity in David’s life. 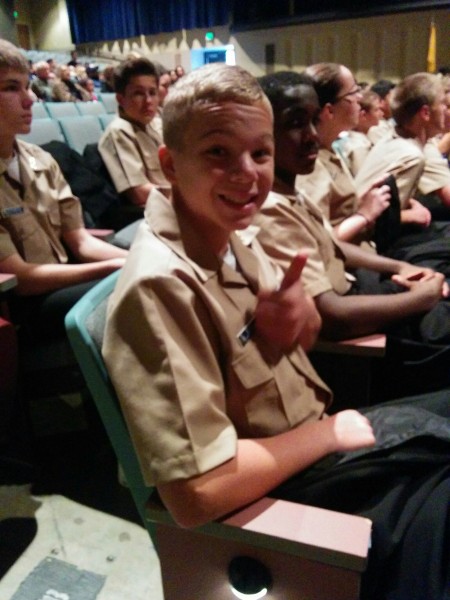 David’s signature thumbs-up, waiting for the BLT ceremony to begin.

Great job winning the coveted Honor Man award, David! We are so proud of you!