Sometimes, when we think about the Christmas story, we forget about the difficult parts. We focus on the awe and wonder that the shepherds felt, and the majesty of the King as the Magi bow before Him and offer their gifts, but we tend to gloss over some of the less palatable facts. 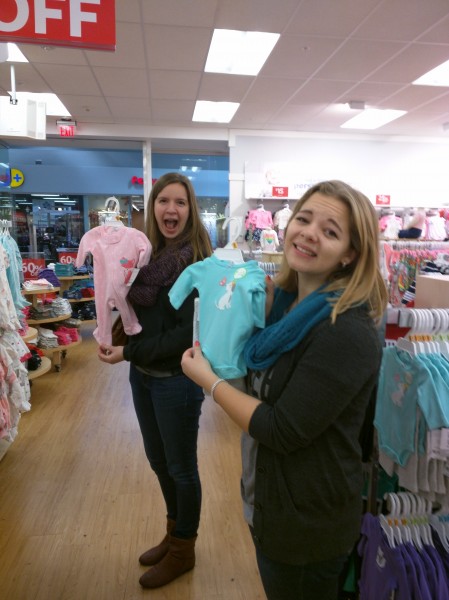 Rachel and Jenny oohing over some baby pajamas

Truth is, the arrival of Jesus was a considerable difficulty for His parents. Joseph, a righteous man, likely lost his reputation (at least among those who did not believe) and may even have lost many of his customers as a carpenter. Mary would probably have been shunned by the other girls of small-town Nazareth, maybe called some pretty terrible names, especially if she was known to be particularly chaste or modest. I can imagine the glee among the unrighteous of Nazareth, to see ‘how the mighty have fallen’, to have Joseph and Mary knocked off their pedestal. 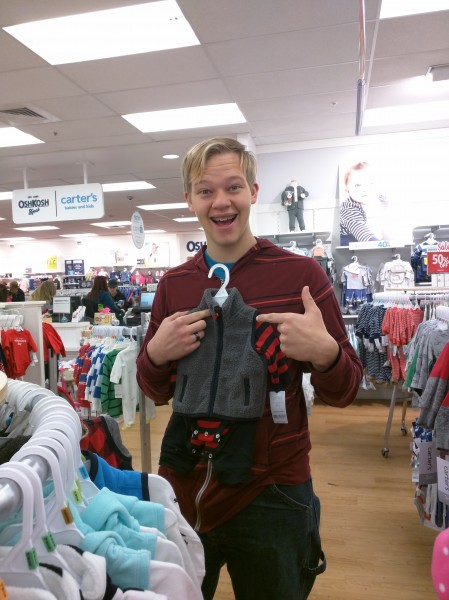 For this reason, my heart turns toward pregnant moms during this season, particularly toward those who may be thinking about aborting their precious child. I think that abortion is the defining issue of our generation — the ultimate social injustice, when you think about it. As much as you might decry the oppression of the poor, or bleed for those who are mistreated because of race or ethnicity, surely the unborn have it worse. To be ripped from life by the one who should have been their loving protector, to have no friends or allies, no one to speak for them, to have no standing before the law — it doesn’t get much worse than that. 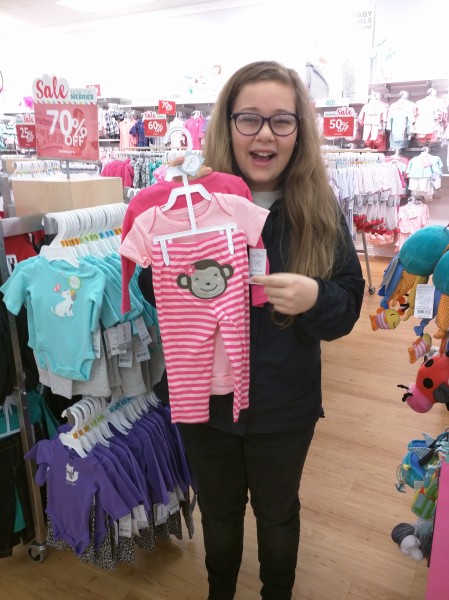 Babies and shopping — both very dear to Sarah’s heart.

Yet many abort their babies in ignorance — as much as I think of abortion as morally equivalent to murder, I must admit that, when you consider our culture, it is more like manslaughter for some, since so many voices brazenly support and even revere it as a permissible ‘choice’. My heart fills with compassion for the high school girl who suddenly finds herself pregnant, without any support, because no one taught her to keep herself pure and chaste for marriage. 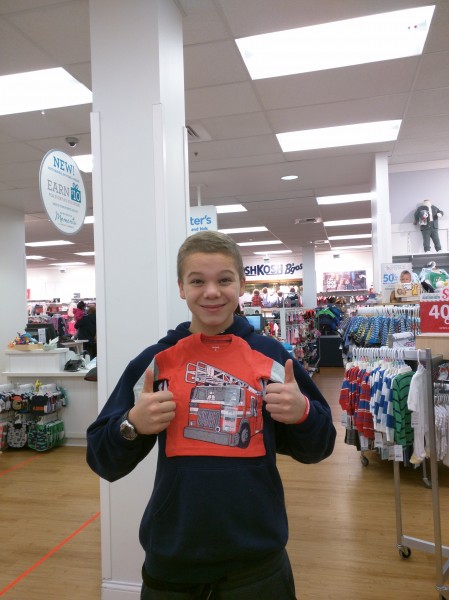 This is where Care Net comes in. Situated directly across the street from one of the local high schools, Care Net offers hope for those who find themselves pregnant without support. Unlike the predatory, money-grubbing, tax-dollar-supported Planned Parenthood (which actively promotes abortion and has been so justly vilified in the news lately for the sale of baby parts), Care Net provides ultrasounds, counseling, parenting classes and material help and hope to these young women. 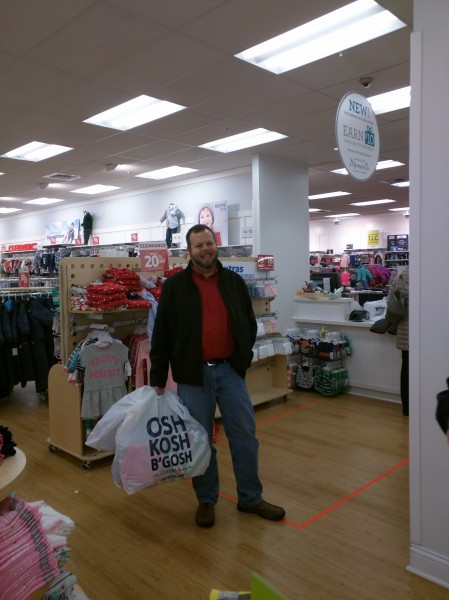 We ended up walking away with three large bags of clothing … quite a haul!

One of the cool things Care Net does is offer a ‘store’ where young moms can shop for baby clothes, using ‘dollars’ they earn through attending classes. As the young moms look at the baby clothes, and the images of the ultrasound, Care Net reveals a powerful truth: this fetus is not ’tissue’ as the world would have you believe, but is rather a living person, one who in just a few months might be giggling and cooing, wearing cute baby clothes. In each of their branches, Care Net has several racks of clothing, but sometimes the baby clothes are a little shabby, mostly hand-me-downs. So I like to buy new baby clothes on sale at OshKosh and Carters, and donate the clothes for their rack. I like the idea of a young girl, maybe the same age as Mary, choosing to keep her baby because she has hope, and because she has come to think of her baby as a precious person, not as something inconvenient to be discarded. 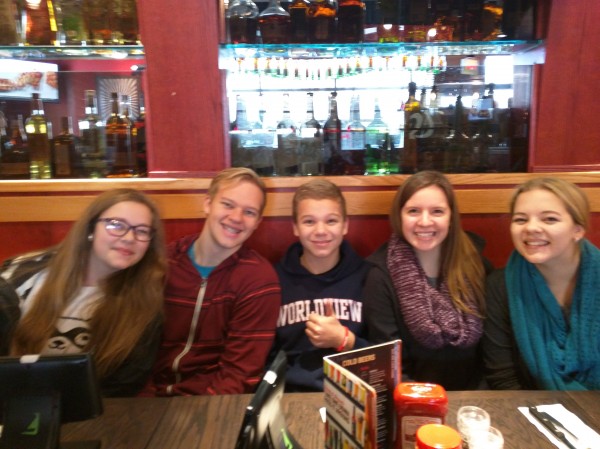 Lunch at Red Robin was warmly approved — we built up quite an appetite while shopping.

So I gathered the kids (plus one honorary daughter) and took them to Care Net to look at the ‘store’. Then I drove them to the outlet mall, and gave them each some money to buy baby clothes (mostly newborn and 3-6 month, as directed by the staff at Care Net). Happily the OshKosh and Carter store was having a pretty good sale, and we snapped up some bargains. Then back to our home town to eat lunch and deliver the clothes. 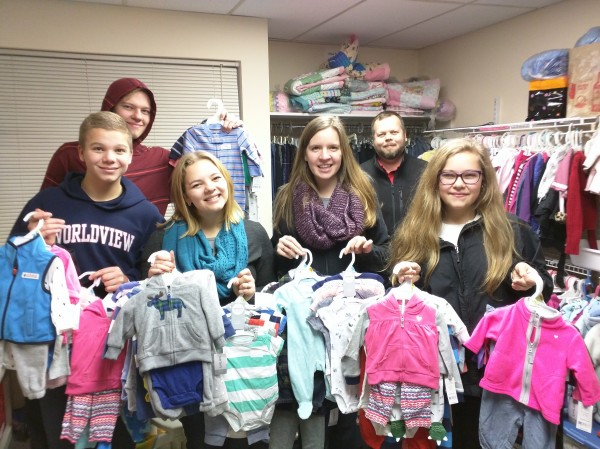 One day the men and women of our generation will be held to account for what we did to prevent the slaughter of more than 57 million babies in the United States since Roe vs. Wade. Most of us will hang our heads in shame, knowing that we did almost nothing to prevent the genocide. But we have to start somewhere. Nationally, Care Net claims to have saved almost 400,000 babies in the past six years, and I see them as offering a credible alternative to abortion. This is one way to make a beginning to stem the tide.

Family Photo
No More Bloggy Hiatus
A Kitten for Sarah

2 thoughts on “Remembering the Christ Child”