Twenty-eight years ago, Kathy and I were married in Michigan. The ceremony was witnessed by some 400 assembled family and friends in the church Kathy’s father had helped to start. Having been graduated from college just two weeks prior, we excitedly embarked on our career as a married couple. Blessed with a pregnancy in less than a year, we welcomed our first-born to the planet before we had been married 17 months.

It has been a pretty good ride since then. Joshua was soon followed by Rachel, then Daniel, all pretty close together. A four year gap was broken by David, with Sarah closely on his heels. I think we both thought that five kids was a pretty good return on ten years of wedded bliss. 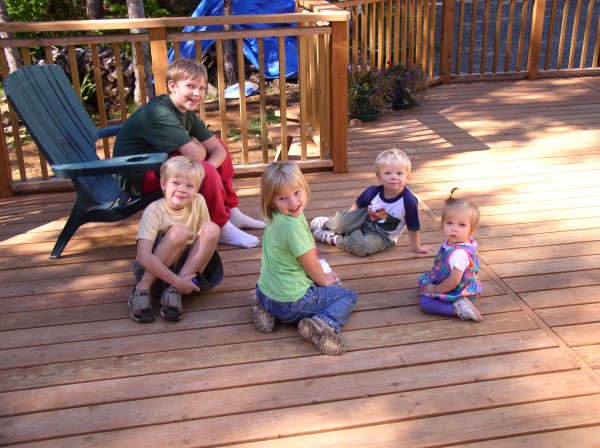 Five kids on the deck of the Duckabush House

In many ways, being parents of five children has defined the two of us for the last several decades, especially as we chose to home-school each of them through early high school. I think the ‘achievement’ I am proudest of in my life so far has been to be the Dad of these five fun, mature, godly and rather quirky humans.

So now what? All five are grown. All five are out of the house, making their way with the gifts and opportunities that God has granted. All five are walking with the Lord, honoring Him with their choices and with their hearts. I feel diminished, as if I was a DVD player — still occasionally needed and useful, but only when people still watch DVDs in this world of streaming services. 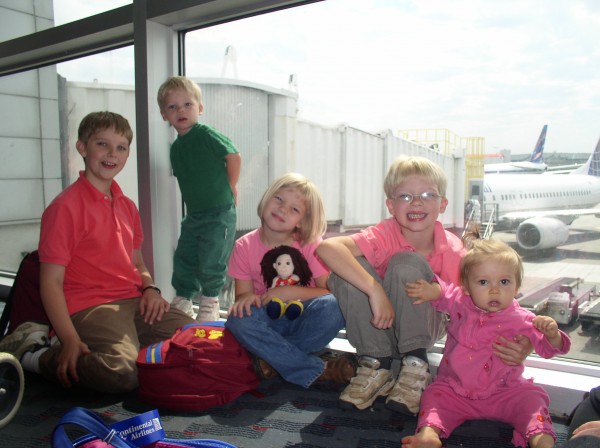 Now Kathy and I sit alone in the airport, reading our books or playing on our phones.

About four months after Sarah was born, my boss called me to his office. Sitting with him was a grim-faced woman from Human Resources, who slid a large folder across the desk toward me, as though she didn’t want to contract whatever disease I was carrying.

“Tim,” my boss told me, “I’m sorry, but we’re going to have to let you go.” He had the grace to look as though he actually was sorry.

I was devastated. I had known our division was facing a 25% cut in personnel, but I had confidently estimated my position on the team as reasonably safe. I felt as though I had been punched in the solar plexus, all the air knocked out of me. I numbly accepted my severance packet and scurried back to my office, where I closed the door and sobbed.

In some ways, becoming an empty-nester has been similar. Even though I saw it coming, I somehow didn’t expect it to touch me. I feel as though I was laid off from my position of being a Dad. 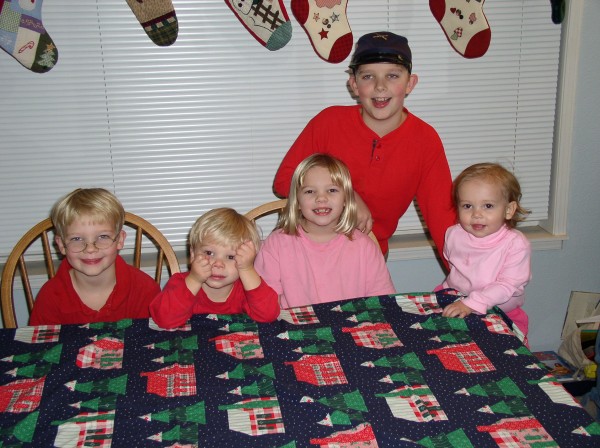 Family dinners are much harder to arrange, with my children in Louisiana, Tennessee and Idaho.

Sure, my kids still need me in their lives. Sure, I have love and wisdom and comfort and provision to lavish on them as they move into their early adult years, finishing college, getting married, starting careers, and building families of their own. But it isn’t the same.

Yesterday, Kathy and I made a list of our goals, as we look to re-inventing ourselves in the vacuum of an absent family. We created a daily/weekly checklist and started a gentle competition to see which of us can be more purposeful as we take advantage of this new phase of our lives. We are hopeful that we can (even at this near-geriatric age) make a new start in becoming the disciplined, godly people we have always wanted to be.

This morning, I met with my ‘boys’ (the ones I’ve prayed with on Wednesdays for the past 15 years or so) and I told them how I felt about being an empty-nester.

“You could always try foster care,” one of them suggested, pointedly.

This evening, as we were praying for our children, Kathy made a comment to the Lord that I was apparently supposed to overhear: “Lord, please let us know if you want us to foster kittens, like Rachel and Tim.” (Rachel and Tim are the foster-humans for a seemingly unending stream of kittens who reside in their home while they wait to be placed in their permanent homes.)

Interestingly, the name of my middle school was Stephen Foster. It is clearly a sign.

In the meantime, the competition rages on. I’m winning at the moment, 20 to 16. But Kathy says, “There’s still time. It isn’t midnight!”

A Workout Partner
WFMW - Life Skills
A Kitten for Sarah

When we first moved to this house in Lakewood, Sarah was two years old. I remember her curling up on one of the empty shelves on a bookshelf as we were moving in — a little nook just her size. Now she is 18, and my youngest daughter lives in a dormitory at a college some 2000 miles away. 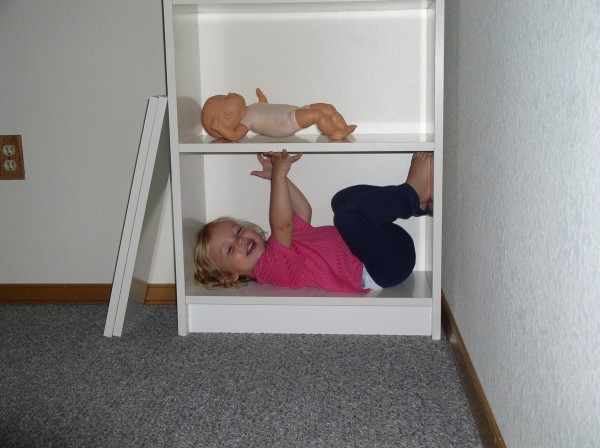 Sarah always loved finding little ‘nooks’ in which to relax while we moved from the Duckabush to the ‘big city’.

As the ‘baby’ of the family, Sarah has had ample opportunity to watch her older siblings leave the nest, and has grown in grace and in maturity far beyond her years. Just seventeen months younger than her brother Dave, she has always been his special ‘buddy’, but has also worked hard to forge and maintain deeper relationships with each of her brothers and with her sister. Like many teenagers, she has the capacity to sleep past noon. She loves coffee and creates colorful beauty wherever she goes. She fills our house with snarky comments, laughter, joy and singing. She listens to us carefully with a teachable spirit, while still not missing a chance to quote us in our silliness, like the time Kathy told me, “Tim, you’re the worst!” I can’t decide which I’ll miss most: the piano playing and singing, or perhaps the teasing and clever wit, now that she is away at school. 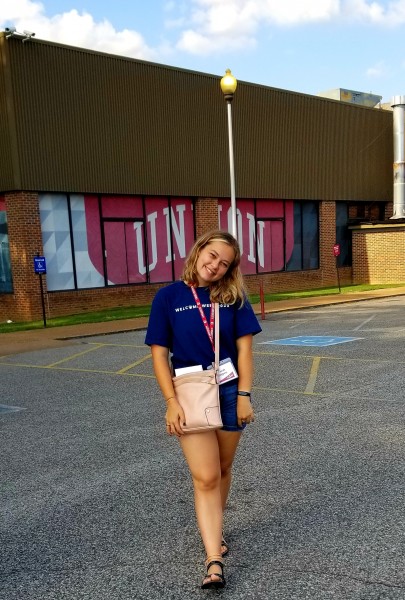 Sarah chose Union University, a Baptist-affiliated Christian college in West Tennessee. She received a generous scholarship, and has been working hard to raise the additional money needed to cover tuition, books, room and board. On Friday, we moved her into her tiny dorm room, and attended ‘crying chapel’ with her as we committed her as a young adult into the hands of God. We are so excited for her, and look forward with great joy to see what God will do in her and through her in these next years. 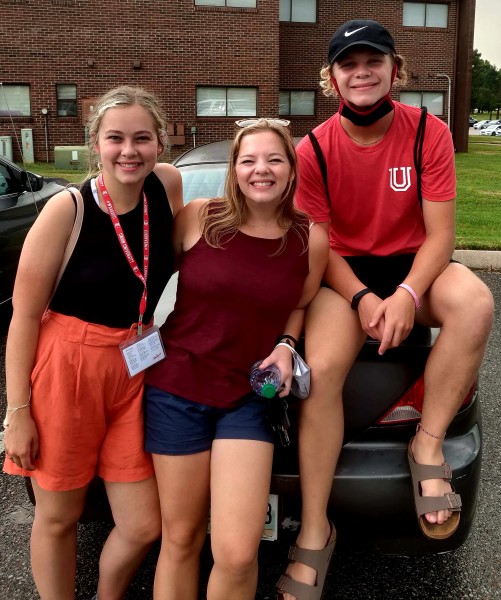 Rachel and Tim were able to join us in celebrating Sarah, driving 7 hours from Louisiana, and Daniel and David (who live there in Jackson, TN) were also very present in shopping and assembling dorm furniture, carrying suitcases, and generally making much of Sarah’s first day on campus. It seemed right and fitting, since Sarah has been there for many of her older siblings, as they have launched into their college years. Even cousin Rebecca and dear friends Karis and Jeremiah were able to join in the fun. 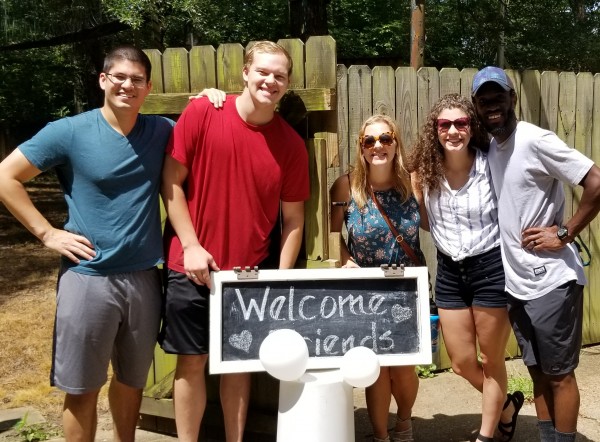 It was especially sweet to gather in Sarah’s dorm room on Saturday night to pray for her and to say our goodbyes. We were supposed to have left campus on Friday, but gave ourselves an extra day since we live so far away. I’m sure she was both grieved and relieved to have us finally depart. 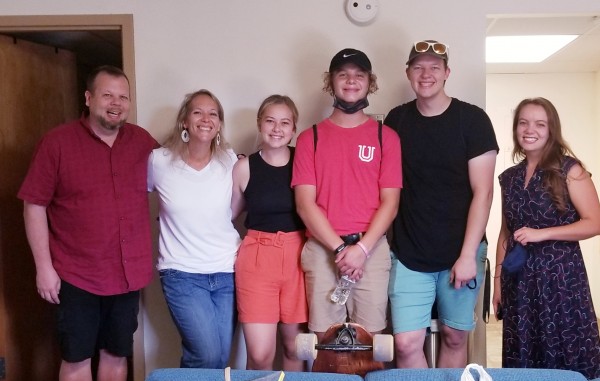 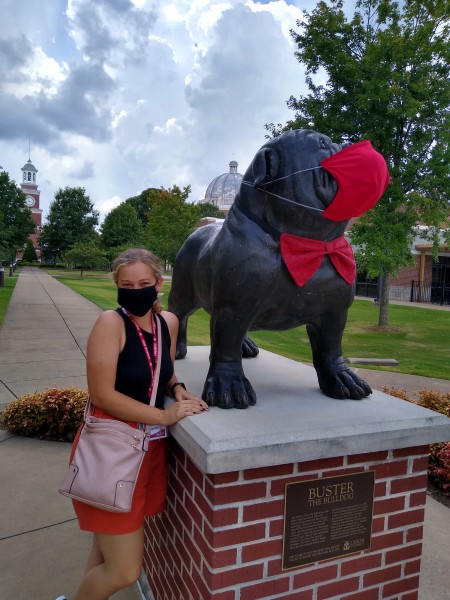 Sarah is a deeply compassionate person, loyal and kind. She is also an excellent student, and very bright. I’m not very worried about her doing well in college because of the solid patterns of study and excellence she has laid down for herself as a home-schooler and in the Running Start program at a local community college. But she is also sometimes reserved and can take time to form deep friendships, so we are praying especially for her relationships with her roommates and classmates. She chose to join the Honors program, and we have high hopes that the Honors community will welcome and befriend her, in addition to the friends she makes through other classes and activities. 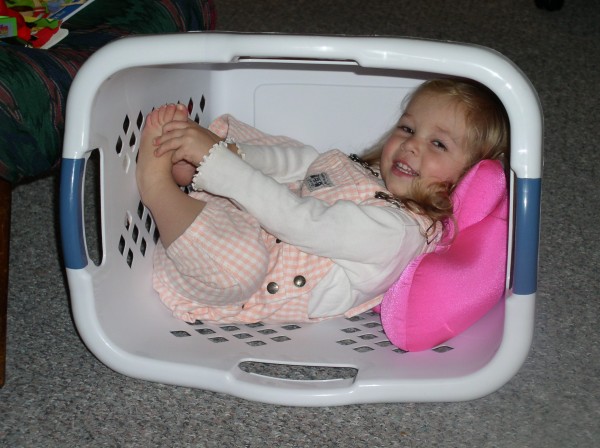 It is hard to believe Sarah is not my ‘little muffin’ anymore.

We are so proud of Sarah, and honor the godly young woman she has become. As she reinvents herself in these formative college years, we are confident that she will remain rooted in the tradition and legacy of our family and of the family of our God. Maybe she’ll call her old ‘Pa’ sometime this week and laughingly quote, “Dad, you’re the worst!” 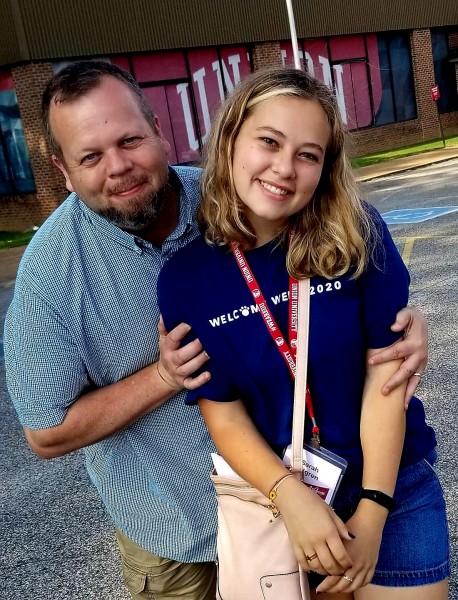 Twelve Things I Love About Rachel
Geocashing
A Tribute for Grandad