We had beautiful weather, last week, for our trip out to the Duckabush. The cousins are getting ready for their next move (this time to Norway–sob). They have packed up and moved out of their rental home and are currently staying in our Duckabush house. 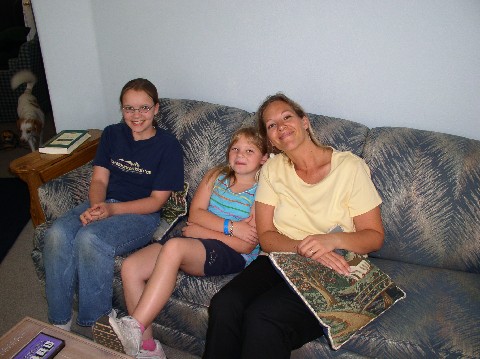 Rebecca, Rachel and Aunt Koffee taking a break from a relaxing day.

Since the drive is double what we used to face, we obviously haven’t been having our weekly Family Game Nights. This is a great sadness for those of us who are addicted to Settlers of Catan (oh yes, and the nice time gathering with family). I think the children, in particular, (well, and maybe an adult or two) miss having Papa John’s pizza every Friday night. I know I miss having dinner all planned and prepared for me (especially a meal that is always a hit with the kids).

With great resolve and fore planning (ahem, okay with great lackadaisical casualness and no planning whatsoever) we decided to have a Game Day (not quite as catchy as Game Night) out at the Duckabush. (I don’t know what is with me and the parenthesis today). We remembered to actually bring Settlers of Catan with us this time — last time we left it at home since we were “sure the cousins had the game”. They, in a terrible rash of packing, had already sent the game on to Norway. Trying to retrieve the game would have been a bit of a trip. We ended up playing cards that evening and barely suffering through (I mean, having a great time).

We got to the Duckabush in the early afternoon and, silly me, I thought we would have plenty of time to finish a game of Settlers before dinner. I had forgotten about the Cousins of Lengthy Turns. Settlers of Catan is a creative, ever changing game that can be as long and involved as you want to be. Obviously there are some among us who like it to be as long and involved as it POSSIBLY can be! 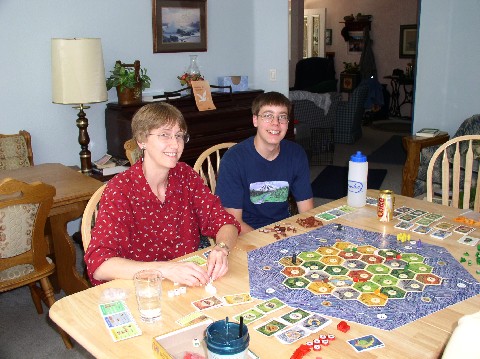 Elizabeth and Timothy in front of the Settlers of Catan game board.

Sigh, we did convince them to take a break so Elizabeth and I could prepare dinner (homemade pizzas this time–oh how the mighty have fallen, or is it risen?). Even though the game runs on turns, there are things that happen throughout the game (even when it’s not your turn) that need your attention. There are roads/cities to build, people who want to steal your cards, resource materials to gather depending on the roll of the dice, and so on. 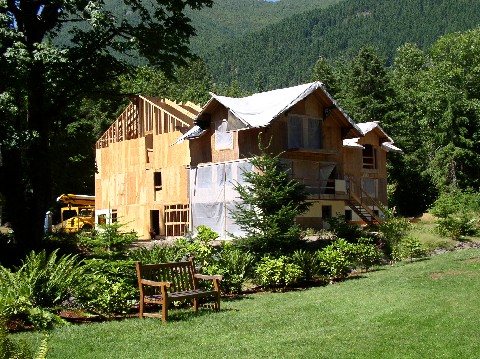 What a gorgeous picture of The Refuge Retreat Center in the making!

Sometime amidst the visit, Tim did manage to go out and take some beautiful pictures of the retreat center. The building is taking shape and coming along nicely. The children had a nice time playing together although I think there were many mosquito bites by the end of the evening. Ouch. 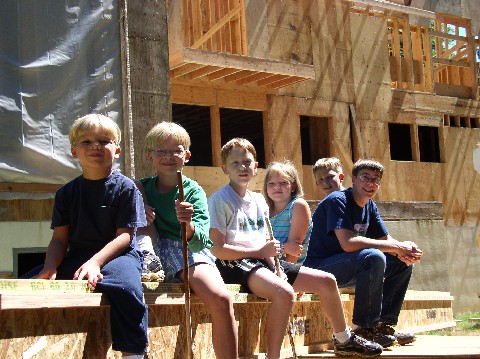 I did my part in the visit by valiantly winning the game of Settlers. I had to do something as Tim has had MUCH too long of a winning streak and really had to be stopped! Hopefully we will manage to fit in several of games during WNW day camp next week. Tim suggested we leave our set of games out at the Duckabush, that way we don’t have to haul them back and forth. It was a smart idea but ever since we drove away, I have had a terrible hankering to play Settlers of Catan. In fact, we have company coming this weekend and I had to tell them that they will actually have to bring their own copies of the game with them since ours were out at the Duckabush. 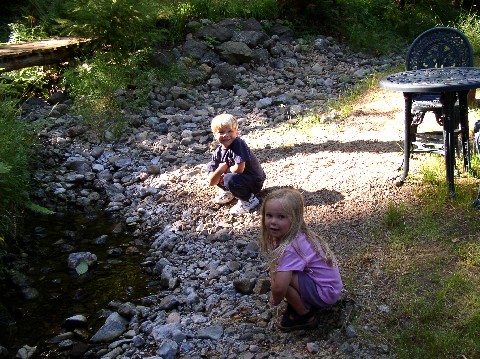 David and Sarah play by the water.

Talk about poor hostessing. I hope I can live it down.
KME