Well, yesterday the estrogen was flowing good and strong as girls (over) ran the house, giggling and laughing and posing pretty for pictures. Today was a wee bit different.

Ding Dong!
8:15 am (For you morning people, who don’t understand nightowlism, this would be considered EARLY.)
In trooped three boys, mitts and baseballs in hand and scooters and helmets in the driveway. With mom and big sister both in the hospital and dad working, they were ready for a day of fun at our house.

They sweetened their early arrival with a pan of brownies and a lovely thank you note. Chocolate is really the perfect entree, don’t you think. Especially if the world is looking blurry and it’s early, WAY before 9 am. Nothing like a little chocolate to brighten a person’s outlook on the day. Really, I’m surprised salespeople don’t cart around chocolate when knock on doors these days. A few well placed dark chocolate M&M’s and they might find people welcoming them in eagerly.

Chocolate blathering (salivating) aside. Pretty much from that point on the boys were in and out of the house, up the stairs, in the garage, scootering down the street, throwing pillows/soldiers/little brothers. It was a grand time. I wish I could say I got great pictures from the day, but alas it was not to be. Somehow boys don’t seem to smile and pose for the camera the ways the girls do. 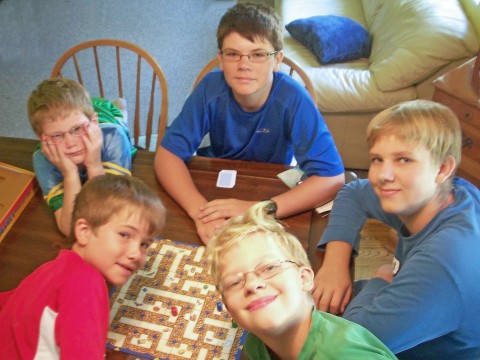 In a rare moment of repose the boys decided to play a game. Since they were all relatively still, I was able to take a quick picture.

The 6 year old had war on the brain and kept trying to get David to play World War IV with him. Or maybe it was WWV, I lost track after the first battle. As long as there wasn’t any blood, I pretty much kept my distance. It’s just plain safer that way. 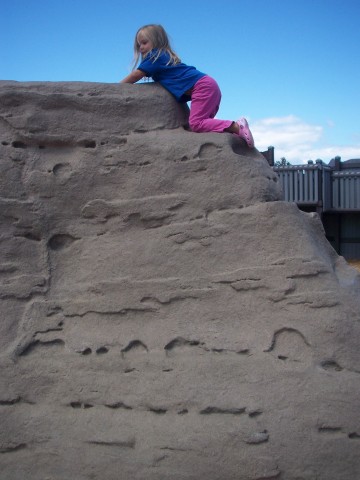 Truly one of the last great climbers. Now if she can just get over her fear of heights.

After lunch, we went to the park. I was all set for some great action shots. Everyone except for Daniel and Sarah had baseball mitts and I had a picture all composed in my mind. The sun was shining and the balls and frisbees were flying. It was perfect. I sat down to write one thank you note, one note. I wasn’t reading my magazine or writing a novel, just one little letter to thank someone for dinner during our trip to Michigan in June.

Yes, June, as in almost 2 months ago. I’m nothing if not prompt about thank you notes. Of course, for me the true test is actually mailing the darn things. Right now I see that very same note lying on the floor, underneath the kitchen table, daring me to get it in the mailbox. Impudent thing. 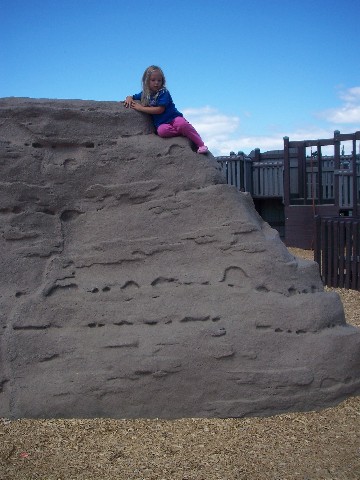 Going up is easy. How do you get down?

About this time my sister in law would probably like to chime in with the, oh so funny, story about the card I handed her last Sunday. It was a thank you note for my birthday presents. The date on the card: July 2006. Yep, the card sat on my shelf (complete with stamp but no address) for a YEAR. A year, people. And then I actually went ahead and delivered it. There’s a level of shamelessness involved here that I’d rather we don’t explore too deeply. Of course, Elizabeth let me keep the envelope and the stamp, she’s extremely gracious that way. No doubt she was just overwhelmed by the lovely words of thanks in the card.

Now I do like my birthday to linger on, and am known to wring every bit of celebration out of it that I can, (in fact I just found out today that my friend Julee has a present for me – sometimes it’s not my fault that the party keeps on going) but some would contend that a year is really pushing it. I would argue with them, but I just found a thank you note from 2005 Christmas and I need to put it in the mailbox. 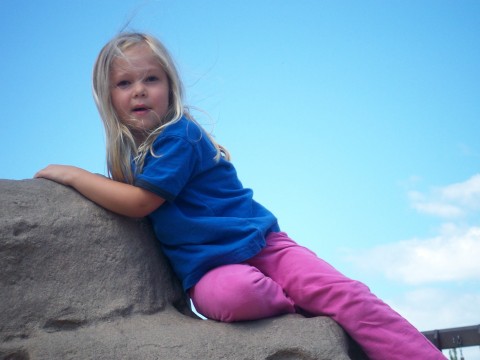 So there I was writing this lovely (and timely) note to some of our friends from Michigan, just about ready to take some fabulous, inspiring, action filled pictures of the kids playing ball, when I look up to see the group descending upon me. They dropped their sports gear and ran off to the playground before I could say, “Hold that smile.” Or even, “Wait, I have to take one more picture, stop moving, let me turn off the flash, oh, that one was blurry, I’m almost done.”

The moment was totally lost. Or was it? I didn’t worry too much because I have no compunction about completely restaging an event in order to properly capture it for the blog. Sorry. Just being real (in a fake, staged sort of way). I dropped the mitts off in the van and figured I would hand them out later and still get that Perfect Shot.

The older children ran off for an elaborate game of tag while I followed Sarah around. It wasn’t until I took a few pictures of her rock climbing that I realized my camera battery was almost dead. Great! I managed to take two or three pictures before the thing died. I contemplated running home for my spare battery. After all, I live close to the park and Joshua and Tom were 13 and 12 years old respectively and very level headed. The park was crowded. No doubt there were lots of responsible parents there who wouldn’t mind watching over my children (and the three extra I was babysitting) for a few minutes. 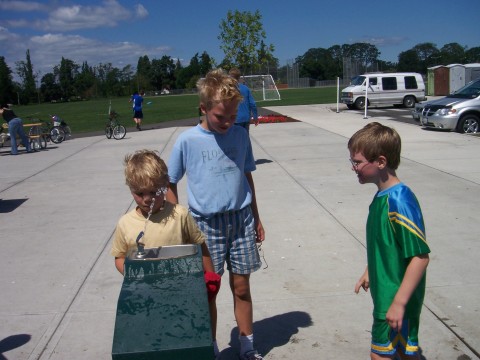 It looks like Luke is headed right for the drinking fountain, desperate for a drink of water.

The fact that I even considered leaving those 8 children (three of whom were under my charge while their mother was in surgery) at the park without an adult there just so I could get a good picture, scares me! The fact that I’m sharing this in public is even more frightening. Then I think about all the decisions parents make all the time, every day. 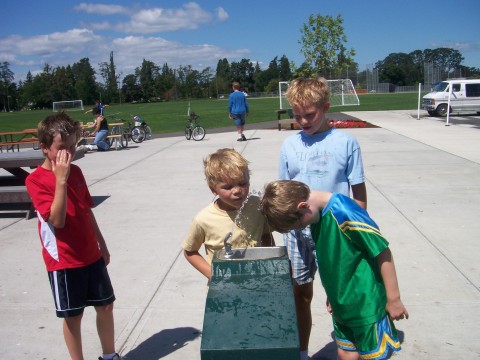 He wasn’t looking for a drink but a dunk. Ah, that feels good.

Big Ones – schooling, discipline, Christian education, finances, entertainment choices
Little Ones – snacks/meals, bed times, clothing, and on and on

I am constantly analyzing and evaluating choices for my family. Sometimes it is easier than others and I can quickly come to a decision (like, hello I’m not leaving the children alone while I run home) and others take prayer, conversation and time.

If Tim and I have clear boundaries and standards for our family, even difficult decisions can sometimes be made speedily. For example, we don’t watch rated R movies so I don’t need to spend a lot of time looking over plot and character development and theme to try and decide if we will watch this movie or that movie. We’ve already drawn that line in the sand and therefore there isn’t any agonizing or debating in that area. In other ways, a habit of consistently making godly choices (serving others, speaking kind words, faithfully attending church, basing decisions on the Word of God and His precepts) can remove much of the doubting and self-questioning that goes on in making decisions.

I will walk about in freedom, for I have sought out your precepts. Psalm 119:45

See how it was possible to turn all of this into a thoughtful, introspective blog? Yes, it definitely means I need more sleep. You all are patient to put up with me. I love the idea, presented in this verse, that we walk in freedom when we search out (and live by) the Word.

Enough rambling. Although I didn’t take enough pictures to really capture the essence of the day, we did enjoy the B. boys. Come back any time!