When I was 21, I visited my Grandma’s house, and (in an unusual impulse of helpfulness) spent some time raking in her backyard. I had a short military haircut, having enlisted in the Army a little more than a year before. A little four-year-old boy came over to see what I was doing, and to tell me (as boys do, to men everywhere) things of serious manly import, like the name of his dog or the cool beetle he’d found the day before. Man-to-man, I nodded sage approval and continued raking, until a startling question commanded my full attention:

The boy seemed to be trying to organize me into the proper category, but he wasn’t sure if I was a big kid or a Daddy, or if there was perhaps a third category.

For a moment, I stopped breathing, stunned speechless by the enormity of the question. Until that day, I had considered myself a teenager, or a college student and (more recently) a soldier. But in the time it took him to frame that question, everything changed for me — it became, in my mind, possible and even desirable to be a father. I realized that it was time for me to start thinking seriously about finding a bride and starting a family. 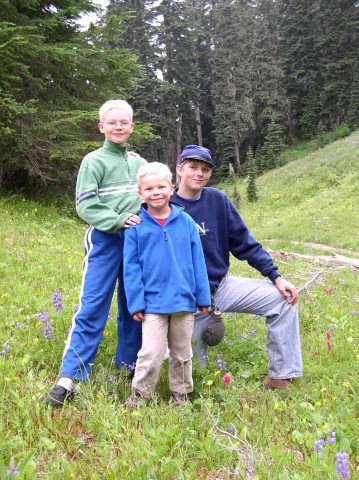 With some help from Kathy, I got started some five years later.

Sons are a heritage from the LORD, children a reward from him. Like arrows in the hands of a warrior are sons born in one’s youth. Blessed is the man whose quiver is full of them. They will not be put to shame when they contend with their enemies in the gate. Psalm 125:3-5

This weekend my boys and I camped on the east side of Mount Rainier, participating in a Men’s Ministries activity sponsored by our church. We hastily packed our gear and drove off, at least three out of the four of us excitedly anticipating a fun weekend. 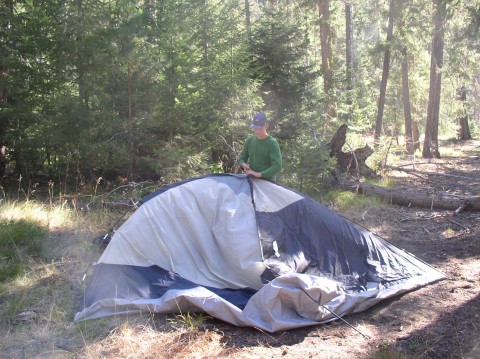 Joshua served us all by assembling (and later disassembling) our campsite almost entirely by himself.

“Do I have to go?” I groaned to Kathy. “It’ll be dry, and dusty, and they don’t even have a decent bathroom or a source of drinking water!” I trotted out a few excuses about how busy I am (which is true) and about how little it would matter to the boys to skip it (which isn’t true). 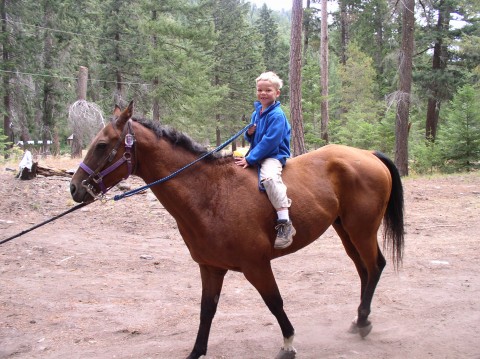 Saddles are for sissies.

Kathy shook her head sadly. “This is not about you. You have a lot of your memories. This is about making memories with your boys.”

She’s pretty glib, when it is me who goes without hot showers.

I resigned myself to my fate, and tried to have a good attitude about it. I even ordered some camping supplies from Amazon, since online shopping is always a good way to cheer yourself up. Just before lunch on Friday, I decided to leave a few hours early, and we nearly panicked, realizing that we would probably miss our Fedex delivery. I fired off a quick prayer: “Lord, please send the Fedex guy early. We could really use that camping gear.”

As we got into the car to leave, God sent the Fedex man with our package, perhaps as a preview of the good things He (God, not Fedex) had in store for us this weekend. The Fedex guy seemed a little overwhelmed at our joyous greeting — maybe he doesn’t deliver packages for God very often, or perhaps only at Christmas time. It may have been a trifle disconcerting the way we carried him up the driveway on our shoulders. 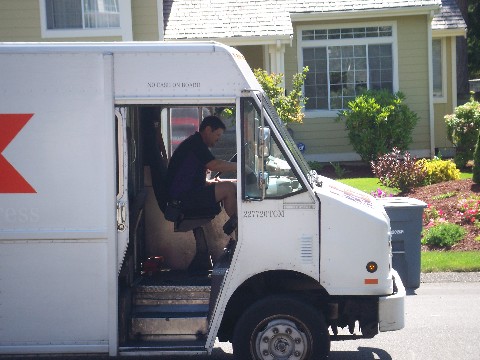 We drove out to the campsite, enjoying sunshine and mountainous beauty along the way. We found a place to put up our tent, and we connected with some of the other men who were already there, and with others as they trickled in. My younger boys jumped at an early chance to ride some horses, and we all gathered to roast marshmallows (each man did what was right in his own eyes, as per our earlier discussion about marshmallows) as evening closed in. 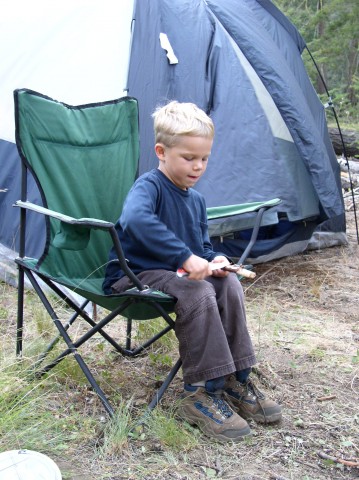 David loved the chance to carve sticks and was careful to drop little hints about how much he would like a knife of his own.

It was a great weekend. We carved and whittled and ruthlessly hurled our camp hatchet at helpless logs. We cooked meals over a little butane stove lent to me by my boss and shamelessly schmoozed meals from other generous men. We cracked (or tried to crack) a bullwhip, toured other campgrounds, and rode horses. We played in the river, motor-boated up and down a huge lake and climbed to the top of a perilous crag, towering above the valley. 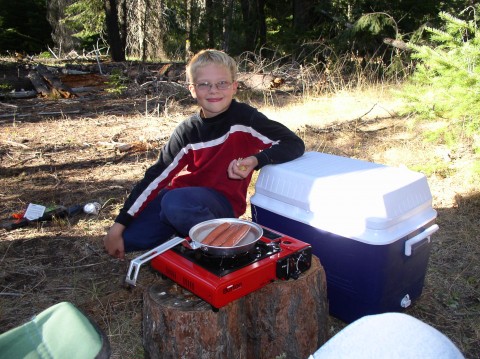 The cool butane stove worked well, but my cookware was not really designed for more than single portions.

As an introvert, it is difficult for me to effectively connect with men I don’t already know well. Although I tried to reach out to the other dads, I still had quite a bit of time for reflection. I thought about the years ahead in the lives of my boys, and what challenges and difficulties they are likely to encounter. I considered my relationship with each of them, and how I might best encourage them to be godly men. Reading Psalm 125, I wondered about the enemies in my gate, and shuddered at that fearful phrase, “put to shame”. 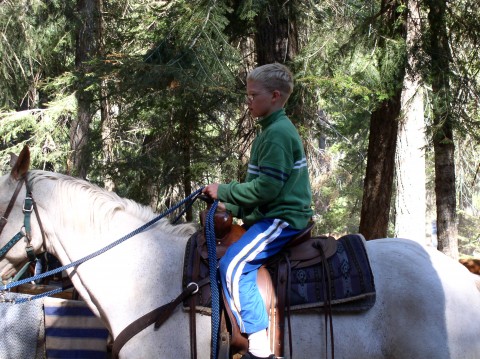 If I ever need to enlist some cavalry troopers, I don’t need to look far.

In Biblical times, the gateway to a walled town was a key strategic fortification. If an enemy could seize a gate and hold it for any decent interval, the town could be infiltrated with their troops and sacked, with the defenders on the wall neutralized. 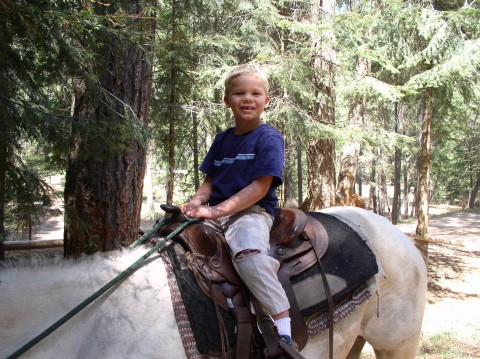 Daniel and David spent much of the weekend going quietly horse-mad. I half-expected Daniel to ask me to buy him some chaps on the way home.

As a father, I think of myself as the captain in charge of the gate. What kind of enemies are likely to try to attack my family? When I first read those verses in Psalm 125, I was feeling protective of my boys, and worrying about their future … but looking more closely, I notice that the sons are cast in the role of co-defender. Maybe the blessing of having sons includes gaining their aid in defeating the enemy at my own gate? 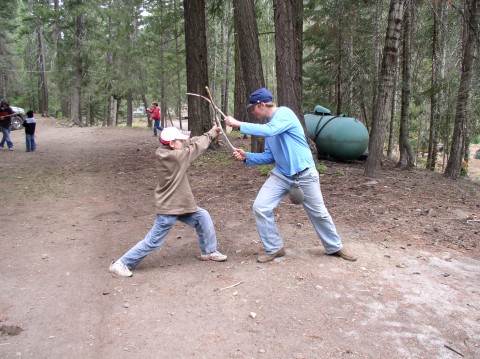 Here’s one enemy who may have met his match!

When we returned home, Daniel wanted to play a computer game, and I went upstairs to take a much-needed shower. When I came back downstairs, I noticed Daniel hurriedly resetting the kitchen timer we use to monitor computer time under our chip rationing system. A few minutes later I probed gently to see if he had been stealing extra time.

“More the contrary, Dad,” opined Joshua. “I think he took off more time than he needed to, just to be safe.”

Daniel chimed in. “Well, you know, Dad, how it is, when you’re speeding, and you see a policeman, and you slow way down? That’s how it was when you came downstairs — I realized I hadn’t set the timer, and I didn’t want you to think I was cheating.” 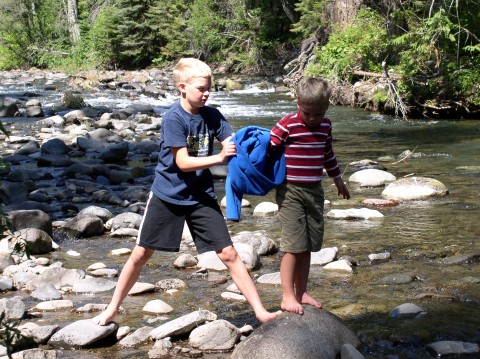 I was very impressed with how protective Daniel was with his little brother.

As it happens, I do know how it is when you’re speeding and you see a car up ahead that may be a policeman. Let us just say that Daniel was not speaking in the abstract, or of the distant past. It was sobering to see how Daniel observed my actions and applied what he saw to his own code of conduct in a matter of hours. I made some pious remark about how, ideally, we remember that God’s eyes are on us always, and so we don’t need to slow down when we see a policeman, because we were already obeying the law, hoping no one would point out that I was, in fact, speeding. 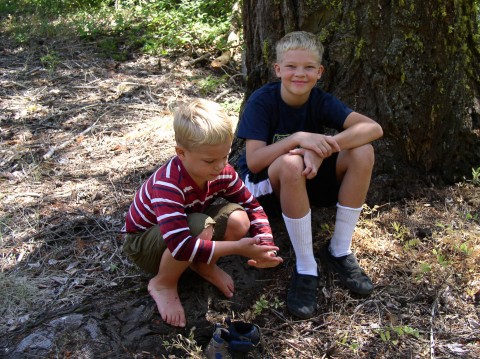 Safe on the other side!

As Kathy waits impatiently for me to finish this blog entry (the pressure of having to blog ‘all weekend’ by herself was apparently too much for her), I think about the way that my sons watch me and hold me accountable. In some sense, they are the young men who I can trust to watch my back and help me to overcome the enemies of laziness, dishonesty, arrogance and selfishness (just to name a few) which attack me in my gate. 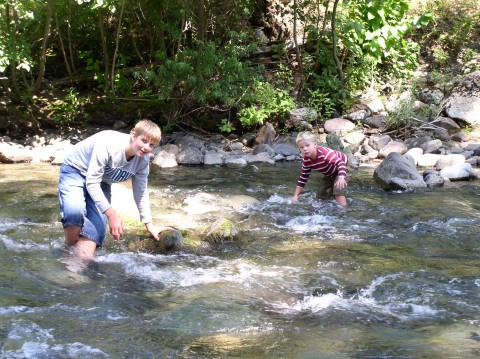 If Joshua thinks the water is cold, it is cold!

Weekends like this are key, I think, in maintaining the close relationship I need with my boys. I had several opportunities to talk with my sons about God and to model godly conduct to them. We laughed and told stories and generally enjoyed each other thoroughly. I guess Kathy was wrong — I can make some memories for myself as well. 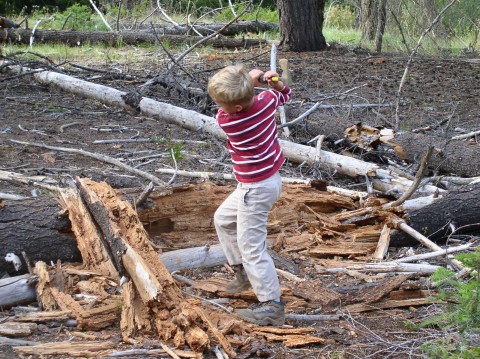 Now if only all our enemies would be as easily defeated as this rotten log.

11 thoughts on “Enemies in the Gate”