As is the case with many parents of large families, Kathy and I are engaged in an elaborate and diabolical conspiracy to live a life of ease and luxury by extracting the maximum amount of work out of our children. Or so some of them they seem to think, based on the complaints we hear.

“I have to do the dishes again?” wails Weasel, my middle boy.

“Do you ever want to eat again?” snips Latte, my wife, in response. She gets a little tetchy about the dishes, I’ve noticed. 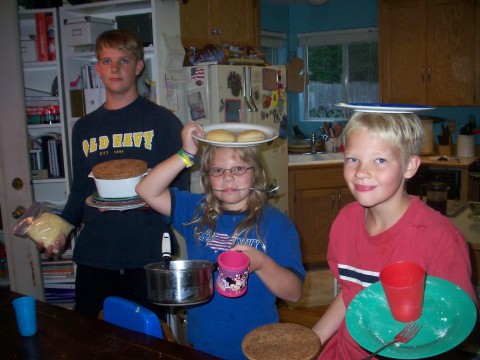 It is sometimes hard to rally the troops once dinner is over.

One of the things that irks me about the work my children do, is that it seems to involve a lot of checking up on them, which significantly detracts from my life of ease and luxury. No sooner do I take my eyes off Weasel and his dish-duty, and he is out the door and halfway to Montana. Dirty dishes slouch sullenly on every available surface, mute testimony to the fact that Weasel has ‘washed the dishes’ only for very low values of the words ‘wash’ and ‘dishes’.

I call him back, and explain that I wanted a thorough job of dish-washing. He looks at me blankly. “This means,” I expound patiently, “that all the counters should be clean and washed, and all dishes washed and either put away or in the dishwasher.” Weasel sighs deeply, and returns to his task, as I regale him with lively discourse on the meaning of the words ‘clean’ and ‘put away’. 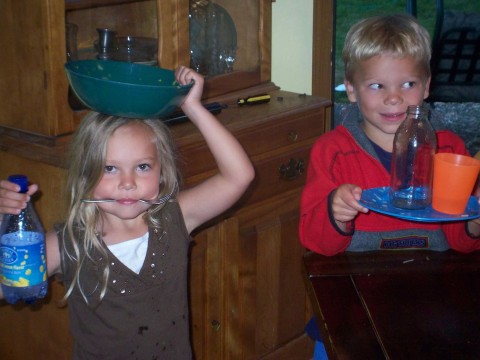 Even David and Sarah are sometimes pressed into service.

Sometimes I work through three or four iterations of this, and the lesson doesn’t always ‘stick’. I often feel that I am simply repeating myself, ad infinitum. It is hard to keep your cool when you think you’re not getting through at all.

My mind, often prone to wander, takes a side trip to the early 1970′s, when my parents had the onerous duty of teaching me to wash the dishes. “Never mind,” they concluded, after only a few dozen attempts. “Let’s have your brother wash the dishes, and you can dry ‘em. Even if you do a crummy job, they will eventually dry on their own.” It was heartwarming to have my parents believe in me so firmly. 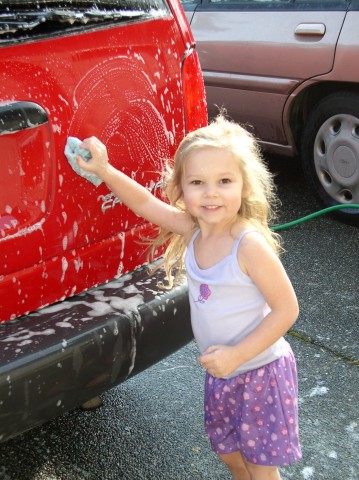 It is amazing how much dirt can be found on a car, when you only wash once or twice a year.

My mind returned from its journey, tongue lolling out unrepentantly like a runaway dog, and I collared it firmly and dragged it back inside my head. Not wanting to give up as easily as my parents, I pondered long and hard about a way to teach this important lesson of diligence in a job, and then, one day, I happened upon the answer by accident.

My lovely wife was away, probably attending a Starbucks Grand Opening in Spokane. “It’s less than five hours away, and the grande mocha frappuccinos are half price!” she pleaded.

For some reason I wanted to make a good impression when she returned, perhaps to prepare the ground for my “We need to buy a new computer” offensive, craftily scheduled to coincide with my upcoming birthday. I was busy working on something (probably field-testing a new hammock design), so I told the kids that I wanted them to clean the kitchen. “When you finish,” I promised, “I’ll take you to Baskin Robbins!”

As they cheered, I dropped the bombshell: “I want you to do a thorough job,” I told them firmly. “Pretend you’re mom, about to leave on a long trip.” 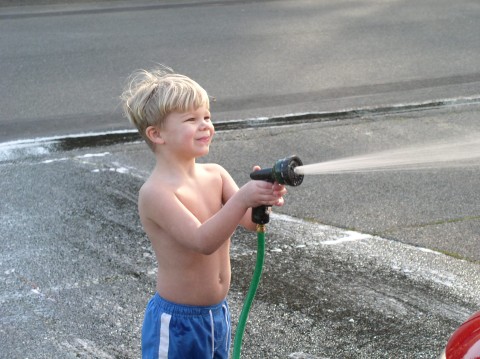 The temptation to misuse the hose is very strong, but David is (usually) pretty careful …

As with many wives, Latte does much of her house-cleaning just before we leave on an extended journey, preferably while I am waiting in the car. “Just four more loads of laundry, dear!” she shouts encouragingly while grabbing a paint brush to fix a spot of trim she missed on a child’s bedroom ceiling. “Once I rearrange all the china and itemize everything in the garage, I’ll be ready to go,” she promises. I do a lot of my reading in the car.

Slug, my oldest son and a devoted fan of Baskin Robbins, immediately took charge. Marshalling the troops, he made sure that the kitchen was scoured from top to bottom, until it gleamed. Astounded at their ability, but true to my word, I rushed them off and bought them ice cream cones … it wasn’t until later that they discovered the true cost of those cones.

Now, whenever they ask me what kind of a job to do, I grin evilly and say, “Just pretend I am waiting to take you to Baskin Robbins. That’s the kind of job I want you to do.”

My son Slug read a draft of this post, and shook his head. “You don’t really make your point very clearly,” he opined. “Whoop-de-do, the kids washed the dishes and you took ‘em out to Baskin Robbins. What kind of tip is that?” I guess he’s right — I’ll take this opportunity to clarify. Some would-be writers have to go through all the tedium and expense of mailing their drafts off to distant editors, and often wait days or even weeks for criticism and fiendish rejection letters. Happily, I am spared all that effort and can rely on merciless nitpicking at the drop of a hat, by members of my own family. 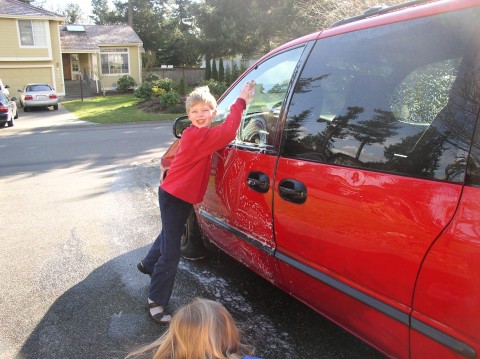 I’ve often noticed that the cleanliness of our cars corresponds closely to the height of our children.

Whether you’re a child or a grown-up, you rarely know what you can accomplish until you are sufficiently motivated. I hope I’ll never forget one of the lessons I learned in Basic Training at Fort Leonard Wood, Missouri. Our drill sergeants, each one striving to surpass the others as a maniacal fiend, marched us out to the ‘confidence course’ one dark morning. Chuckling cruelly, Sergeant Thumbscrew walked us through the course once before turning us loose with these ominous words: “The squad with the slowest time has to repeat the course.”

That was the day I discovered that I could ascend a 50-foot ladder of logs in about 10 seconds, and that the fear of falling to my death was as nothing compared to my dread of Sergeant Guillotine. I never would have thought that I could complete that grueling obstacle course at all, let alone at a dead run. Staff Sergeant Gibbet wrung every last drop of energy out of us as we completed the course four times that day, and greatly expanded my confidence in the capabilities of my physical body.

Sometimes a parent can be fooled or distracted by the smoke screens and excuses that children love to offer:

On about the same frequency as full solar eclipses, the excuses are true; more often, though, it is simply a matter of motivation. Ever since the Baskin Robbins incident, I find myself asking my children this question: “If I promised to take you out for ice cream as soon as you did a good job on that chore, would you be able to do it, quickly and thoroughly?” Now that they have a tangible picture of a job done well through strong motivation, their confidence in attempting difficult chores is substantially improved. 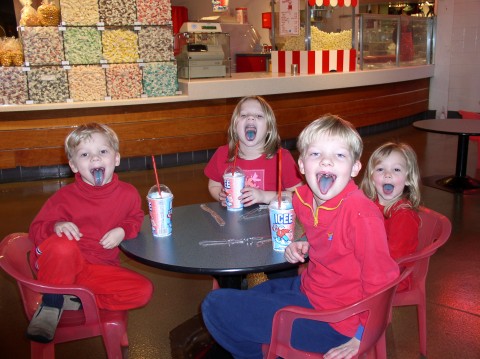 I’ll admit, sugar in its varied forms is a key weapon in my parenting arsenal.

As my children grow in grace and maturity, I hope to teach them to be motivated by a passion to please and glorify God, rather than by a double scoop of Chocolate Chunk Royale. Ultimately, I suspect that God’s rewards go considerably beyond 31 flavors; but that is, perhaps, a discussion for another day. In the meantime, I can’t say I mind the occasional trip to Baskin Robbins, myself.

10 thoughts on “Tuesday Tips for Parenting — Doing a Thorough Job”