As a result of poor timing on the part of my parents, I missed the brief era in American education when it was fashionable to emphasize self esteem at the expense of excellence. My public-school teachers, in callous disregard of my tender little heart, stubbornly insisted that my grades correlate with my performance, so that I graduated from high school with more B’s than A’s. In college, this worrying trend persisted, and I was forced into a much closer acquaintance with my deficiencies than I would have wished. Sadly, being a grown-up isn’t all it is cracked up to be, and opportunities to rise above the mundane are infrequent.

Every once in a while, however, life offers an opportunity to reverse the negative flow; last week I found just such a chance. 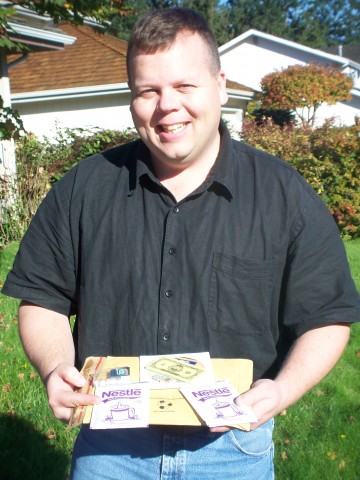 Wouldn’t you award this man a prize?

I don’t read many blogs, but I do sporadically follow the adventures of Scott, a clever and quirky Dad, husband and pastor in the wilds of Indiana. One day I happened across a post in which Scott apologized for a recent blogging hiatus. (His blog is pretty new, and I’m sure his wife encouraged him to post more regularly, if he wanted to attract a readership.) Scott said he had a bunch of prizes from his desk drawer and asked for people to comment with regard to how they used the time they saved from not reading his blog. I was compelled to speak from the heart, hoping to encourage him to keep blogging. Little did I know that he was serious about sending the ‘valuable’ prizes.

Today I received in the mail a mysterious package, with not one, but five valuable prizes:

Enclosed was a short note, which I provide for your edification:

Tim,
Congratulations on winning this wonderful set of prizes in the contest you entered on my blog.

If this is the wrong Tim, I apologize, but you may still enjoy these random prizes scrounged from the back of my pencil drawer. Or throw them out. I’m not particularly an advocate for accepting used containers of breath fresheners from complete strangers.

And to be absolutely clear, the money enclosed is FAKE. The “Milton Bradley” imprint should be a dead give-away. If you try to spend it anywhere, about 60% of retailers have specific training for employees for how to spot counterfeits, so don’t be surprised if you end up in the slammer. I think it’s actually from a game of “Operation” so you might be able to use it at your child’s next doctor visit.

I learned a number of things about Scott from this letter, some positive, some worrying. He is apparently a very generous man, and a man who loves to celebrate, sending me five prizes where only one had been promised. The note was signed in pencil, which suggests a lack of commitment to our relationship. (In fairness, since we’ve never met, it might be best if we start out as ‘Pencil Pals’, in the finest traditions of Charlie Brown.) On the other hand, it tells me that he is a man of his word (in that he really does have a pencil drawer). Frankly, the precision of his estimate with regard to retailers who train against counterfeiters, made me wonder if he’d already tried (and failed) to spend the Milton Bradley money. Noting his apparent need to emphasize that the money was fake, I discovered that Scott doesn’t see me as the sharpest knife in the drawer. I suppose this is to be expected, since he comments on (and presumably reads) my blog entries from time to time.

I was delighted (to state the obvious) to receive this valuable package, especially so close to my birthday. The hot cocoa will probably be slurped up by my children, but I can hardly wait to view the DVD musical, in all its glory. The mints (all five of them) will come in very handy, and I need hardly mention the utility of an extra ‘B’ tile for our Scrabble game (9 points if I can finesse a triple-letter-score square). We’re in the market for a new fridge; it may be that Scott’s failure with the Milton Bradley money was due to a lack of confidence on his part — it might be amusing to succeed where he failed so woefully. 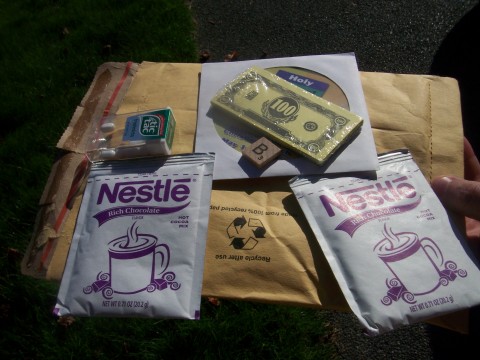 Hard to believe Scott sent this package without insuring it!

It is at times like this when you are on top of the world, and you want to go out on your driveway and shout to the world, “I Am a Winner!” And so I did.

The neighbors already think I’m weird, what did I have to lose?