For the past two months or so, we’ve been presenting “Tuesday Tips for Parenting”, some of which have been well-received, and others that have been simply, er, received.

We’re away from our dear kiddos as we attend this church leadership retreat, so we didn’t really have anything to say about parenting, except that is awfully nice to take a break, every now and then. Your marriage provides the water in which your parenting is accomplished — if the marriage suffers, it becomes much more difficult to parent from a balanced perspective. While we’re here, purportedly, to build relationships with other church leaders, truth be told, Kathy and I are mostly having fun with each other.

Our children are fortunate to have grandparents on both sides of the family that love them and take an active interest in their lives. Over the years, we have been thoroughly blessed by our parents’ willingness to pinch-hit for us, sometimes for days at a time. Today Kathy and I walked down the beach for more than two hours, renewing our souls and our relationship with each other, secure in the knowledge that our kids were safe and well cared-for. Thanks, Mom and Dad!

I’ve written the last couple of blog entries, as Kathy stays up late playing Cranium with the girls, or working on her BSF lesson. “Enough is enough,” I scolded her. “You need to write a blog tonight, or we’ll lose all our readers.”

Kathy was unfazed. “You write one, and then I’ll fix it for you and make it funny.” She waved her hand dismissively in the direction of the laptop.

Humph. I think she just doesn’t want to write because she knows we have no pictures to share — whenever we fail to come up with eye candy for our demanding readers, we get a lot of guff. In all honesty, I must admit that Kathy has a rare gift for tweaking my blogs to give them that extra edge of humor. If you’ve ever laughed out loud while reading one of my posts, it is likely because of her inspiration.

As I said, today we walked along the Oregon Coast, admiring the sun and the surf and some glorious rock formations (including Haystack Rock). Here’s one of the pictures we took, but can’t download (because Kathy forgot her camera cable):

And here’s one of Kathy looking pretty, about to be splashed by the surf:

Kathy and the Surf

As you can clearly see, it was a glorious change from all the rain we’ve been having, and a great day to visit the beach. Stay tuned for tomorrow’s “Works for Me Wednesday” posting, which will (I hope) be written by my lovely bride.

Oh, all right, here’s a picture. We didn’t take it, but it is pretty much what we saw today. 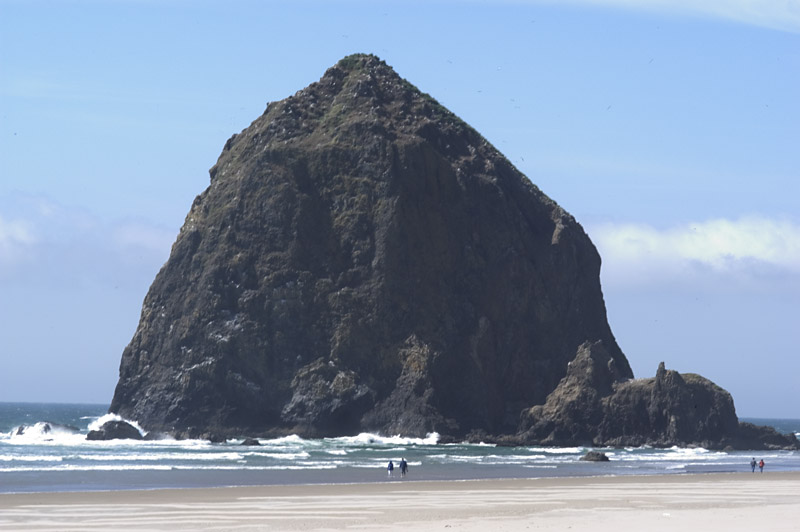 When Kathy and I were first married, we joined a Sunday School class for young married couples at the church we attended. The church was in the southwest corner of Connecticut, and many of the couples were as feisty and outspoken as you might expect, in the shadow of New York City.

I remember one of our gatherings in which we decided to play a homemade version of the Newlywed Game. “This will be fun,” we said, “what a great way to get to know everyone and poke a little fun at ourselves at the same time.”

Unfortunately, the game proved a little too volatile for our competitive group, and some of the players actually became angry with their spouses over answers. “I still can’t believe you didn’t know the name of my third grade teacher,” I might have snarled at Kathy.

After months of practice with cue cards (and still getting the answers wrong), Kathy and I decided that starting this game had been a serious mistake. “It’s just playing with fire,” we agreed, soberly. To this day we warn other young couples to stay far away from the Newlywed Game, “If you value your marriage,” we tell them in hushed tones.

Therefore, you can imagine our “delight” when we were selected to play the Newlywed Game this evening at the Church Staff/Elder Retreat we’re attending. We were the ‘middle’ couple, competing with a husband/wife pair who were married about a month ago, and with another couple who have been married 49 years. No doubt we looked like easy targets, or at least good for a few laughs.

After all these years, who knew the Newlywed Game would return to haunt us.

Thankfully the questions were a good mix of easy and difficult, and we actually had a lot of fun playing. The audience got some good laughs, and we were only defeated by a single point, which I thought was a pretty good showing. We went out into the hallway after the game to muffle any recriminations: “My third grade teacher’s name was Ms. Pollack, for crying out loud!”

After the game ended, the pastor announced he was offering discounted marital counseling to all contestants, which I thought was extremely helpful. I wonder if the 2 to 2:30 pm block is still open.

Kathy left her camera download cable at home, so the blog will be picture-less for the time being (gasp). Nonetheless, it looks to be a fun couple of days. My folks graciously agreed to stay with the kids while we are gone, so I’m sure the house will be hopping in our absence.

Today I had the privilege of attending a work day and board meeting for The Refuge, a Christian Retreat and Conference Center being constructed on the Olympic Peninsula, along the Hood Canal. For the last seven years or more, this project has been under development, and is finally coming to fruition, as the main lodge rises majestically from the ground. 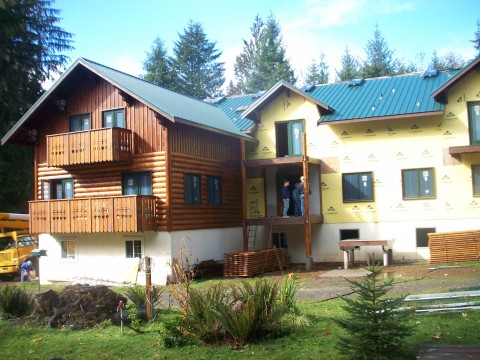 My parents have waited a long time for this dream to become a reality.

When I was a boy, I perfected the knack of walking into the kitchen as the last dish was dried, or rounding the corner of the garage as the last leaves were stuffed into bags. Mastery of this work-avoidance skill took a lot of practice and stealth, but I was able to spare the time, having hoarded many hours by the clever expedient of not doing my homework.

In 1999, we moved to Western Washington, and almost immediately my parents began hosting ‘work parties’ as they attempted to transform the grounds of the Refuge from a swamp to an elk pasture (they thought they were building a retreat center, but the resident elk knew better). A crowd of hard-working folks would drive out from Fort Lewis at crack o’ dawn and be industriously clearing trails or hauling brush while I was still slouching around in my boxers, sipping on my first Diet Coke of the day. With our house less than 200 yards from the Refuge grounds, it was hard to pretend we had other pressing engagements. We would keep the blinds drawn, pretending to be out of town, but sooner or later one of the workers would count our cars or spot one of the kids, and the jig would be up. We felt vaguely guilty about our half-hearted support of The Refuge, and so I would emerge from the house and join the busy crowd, making a big show of looking for my work gloves. 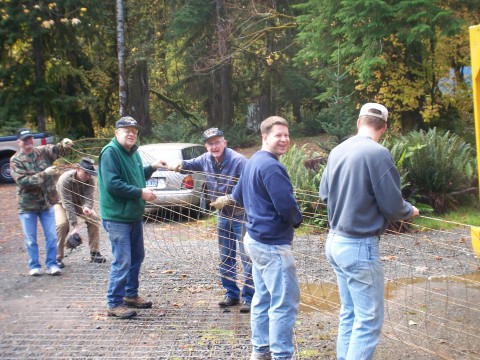 Many of the volunteers that attend these gala events are retirees, so you might think that I could impress them all with my physical strength and endurance. Nothing could be further from the truth. These wiry, tireless folk apparently train for weeks before coming out for a work day, and they routinely work me to exhaustion without seeming to break a sweat. One hot morning, gasping for breath as I hauled a load of brush, my childhood skills came to mind, and saved the day.

I realized that a major challenge for many non-profit organizations is publicity, and I was in possession of a serviceable digital camera. I promptly decided that the Refuge would be better served (and my skills better utilized) if I appointed myself official photographer and Media Relations Officer. Grabbing my camera, I now drifted slowly from work site to work site, snapping happily away while others slaved. If challenged by a sweating worker, I need only show my camera and shrug, made exempt from all actual work by this magical talisman in silver and black. I imagine there was probably a guy like me standing by, when they built the pyramids, sketching happily in a shady spot, sipping on a cucumber smoothie, while slaves hauled ten-ton stone blocks to the crack of a whip. 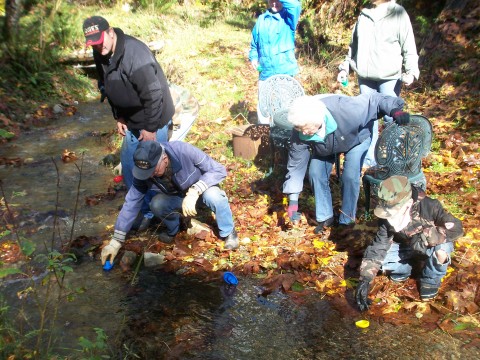 Even the grown-ups got to participate in the boat races. I carefully didn’t snap a picture of the lady who fell in the creek, while trying to retrieve an escaping boat.

Today, I decided to try some actual work, if only for the novelty of it … but I found I built my work-exempt role too well. No sooner was I loading some wood into a truck, than my Dad was asking me to take a few ‘candid’ shots of the other workers. When I tried to help move some picnic tables, I was again pressed into service as photographer. Slipping away to rake a few leaves, I was summoned by my Mom to shoot the boat races down at the creek. 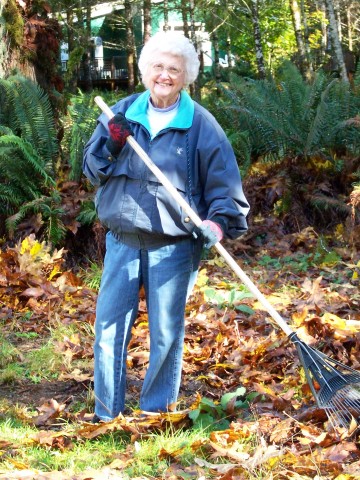 She looks innocent, but that’s my rake she’s holding.

We did eventually hold the board meeting, and I collapsed into a comfy couch, nursing the blister on my right index finger. You’d think they would make those shutter release buttons easier to push! I suffered through the meeting and managed to choke down three helpings of baked salmon and a piece of pecan pie — I’m just a martyr among men. 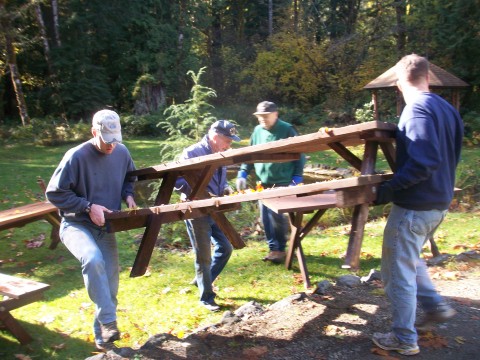 We decided to table this issue.

Arriving home, I walked into the kitchen as the last dish from dinner was put into the dishwasher … it is nice to see I haven’t lost my touch.

David and Sarah were invited to their first Hey Kids Club meeting this evening. You might not recognize the name of this organization, it’s new and rather exclusive. I’m sure it will be wildly popular in no time. The founders are two sisters who decided they wanted to have a club for their friends. After much deliberation, argument and long discussion, they came up with this catchy name. I like it. Short, sweet, and to the point.

Some of the Hey Kid members in warmer weather.

Membership is VERY restricted, although older brothers can sometimes finagle invitations if they side step the parents and go straight to the core members (ages six and eight). Clever and efficient. Tonight’s opening event included dinner and a movie. Special activities to come: Thanksgiving crafts and cookie decorating. I’m telling you, this is a great club. 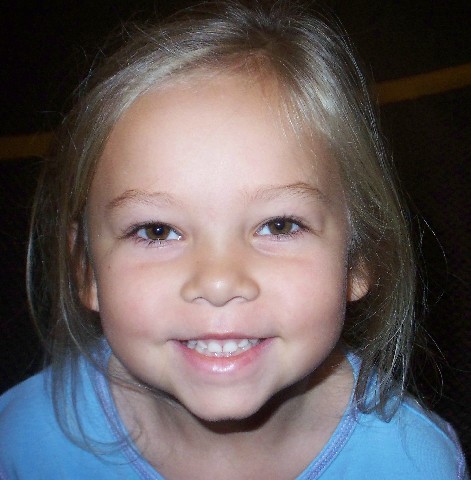 Sarah has been waiting all week for tonight’s party.

With Joshua off at a sleepover and the younger three at the Hey Kids opening night, we had only Rachel home with us this evening. Not content to have a quiet meal alone, we had two couples over for dinner. Tim hired the children to help me get the house ready for company. It was wonderful! They powered through the entire downstairs. We even put Elizabeth (a visiting Hey Kids member) to work. The weekend is here and the house looks lovely.

Now if I can just use Saturday to tackle (wrestle to the ground would be preferable) my HUGE to do list, life would be good. 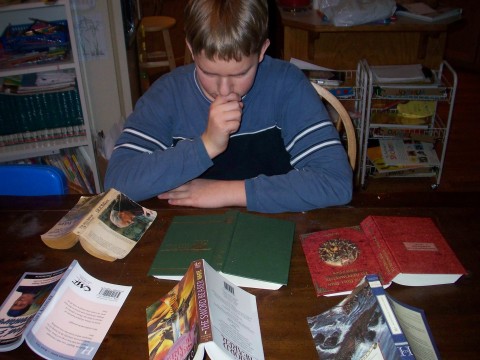 So many books, so little time. 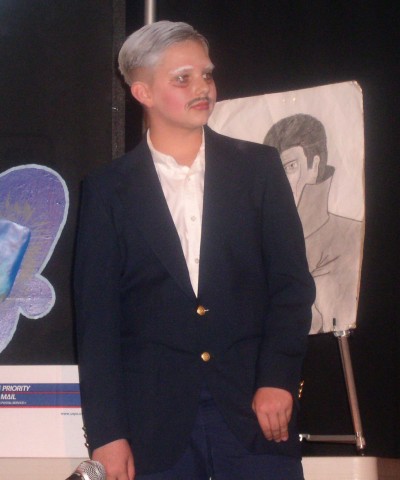 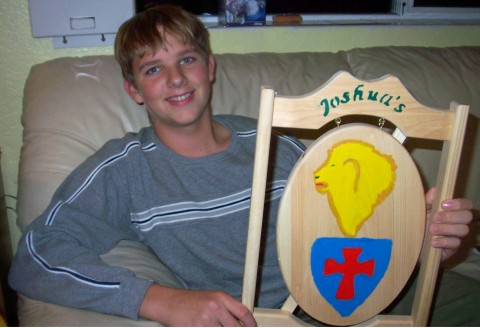 Rachel and Tim designed this sign for Joshua’s room. Rachel did the painting.

I’m sure Joshua has his faults — he is, after all, descended from sinners whose only claim to fame is that they were loved and chosen by Jesus. But we’ll save the discussion of his shortcomings for his Anti-Birthday, to be held on the 18th of April.