Some of you may have wondered at my absence from the family photos that were posted yesterday. Let’s just say that I came to the negative attention of the Blog Taunting Police, whose authority is much more far-reaching than you might suspect. Kathy and I agreed not to further aggravate the matter by posting any pictures that featured me; I didn’t want to come across publicly as defiant or unrepentant, after all the wife- and blog-reader taunting that transpired.

Based on advice from legal counsel I have retained, I may further jeopardize my precarious standing with the BTP (Blog Taunting Police) unless I am very careful with any public statement. Suffice it to say that it is now permissible for me to post one of my favorite pictures from the CD, if only to prove that I did, in fact, attend the photo-shoot: 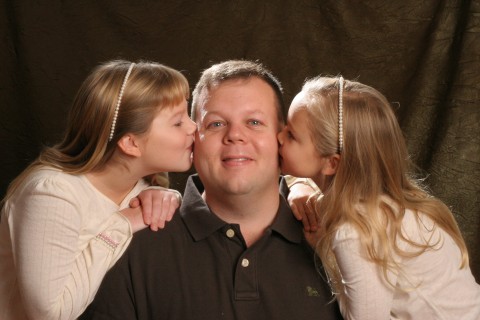 As you can see, all was forgiven, at least by my daughters.

You’ll just have to take it from me that my ‘interview’ with the BTP (let’s just say they didn’t offer me any Nutella) has produced in me a sudden desire to cater to our discerning blog readers. I heartily repent of my evil and ill-conceived picture-posting-post (PPP).

As Kathy mentioned, I was very pleased with the CD of pictures we received, and was forced to eat some humble pie after all my swaggering statement: there is no way I could have taken these pictures (especially since I was, in fact, in several of them.

Today we had the privilege of lighting the first Advent Candle at church — we all wore red shirts and many of us dressed in black pants or skirts. (To clarify, Kathy wore a black skirt and I wore black pants, not the other way around.) We read a passage from Isaiah and related one of our family Christmas traditions. As we sat down, I felt vaguely disappointed … we dressed up all ‘matchy-matchy’, but nobody took hundreds of pictures of us! Gone was the happy chatter of camera shutters … how fleeting was our fame!

For to us a child is born, to us a son is given, and the government will be on his shoulders. And he will be called Wonderful Counselor, Mighty God, Everlasting Father, Prince of Peace. Of the increase of his government and peace there will be no end. He will reign on David’s throne and over his kingdom, establishing and upholding it with justice and righteousness from that time on and forever. The zeal of the LORD Almighty will accomplish this. Isaiah 9:6-7

9 thoughts on “Chastened and Repentant”