Every now and then I am a little embarrassed at how I spend my time.

I’m a busy guy, most days. When I’m not working for my employer, or parenting, or involved in things with church, I sometimes work on side projects, most of them on a volunteer basis. Every now and then I take on some extra work that brings in additional cash, but even then it is hard to find the time, and projects languish.

Yet somehow I always seem to find time to play computer games. Lately, I’ve been playing Bookworm, a Boggle-like computer game that I bought for Kathy more than two years ago. Kathy (or maybe one of the kids) recently re-discovered it, and we’ve all been playing (even David and Sarah offer helpful suggestions). It is a very fun, and addictive single-player game. Significantly, we’ve not been requiring Computer Game Chips for this particular game, since it is, er, ‘educational’ in nature.

It is a very affirming game, announcing ‘Excellent!’ or ‘Astonishing!’ when you find a high-scoring word.

When I say it is a “single-player” game, I’m not being entirely accurate — Kathy and I have become the tiniest bit competitive as we vie for the highest score or level, or the longest word. “Hey, look at this!” Kathy chortles. “I’ve got ‘BLUDGEON’ — what a great word!” Joshua and Rachel rush over and nod approvingly.

“Hmmph,” I snort, miffed that the kids cheer Kathy. “That’s really not much better than my ‘ABANDON’. What’s one little letter, between family members?” Daniel smirks at my pathetic attempt to upstage Kathy’s word. “Fantastic!” the game crows, as she completes the word.

Not one to tolerate a slight, I switch gears to the other new game I’ve been playing: Knighthood. An application that runs within Facebook, it is a somewhat silly game in which you begin life as a Squire and work your way up the feudal ladder by constructing fortifications, recruiting vassals, and attacking your neighbors. I’m still in the ‘building’ stage, fearing to make the transition to ‘War Mode’, but I’ve happily recruited nearly all my ‘friends’ from Facebook to play. (Yep, all three of them.)

Some of them sidle up to Kathy at church. “I got this weird message from Tim — apparently I’m some sort of a … vassal?”

Kathy rolls her eyes, martyr to geekdom that she is. “Yes, he’s all in a tizzy about it. His cousin Kevin introduced him to the game, and it’s been nothing but ‘Knighthood this’ and ‘Knighthood that’, ever since. Just humor him, add the application, and he’ll be happy. I’d draw the line if he starts calling you a ‘varlet’ or a ‘wench’, though.”

If my unsuspecting recruits accept my invitation, and add the Knighthood application to their profile, they become Knights (or Ladies) and are worth twice as much to me as when they were lowly Squires (or Handmaidens). Otherwise, after 14 days of servitude, they leave my court, and I have to recruit ‘em all over again. Presumably, if I keep bombarding all my ‘friends’ with Knighthood invitations, they’ll either add it to their profile or put me on permanent ‘ignore’. 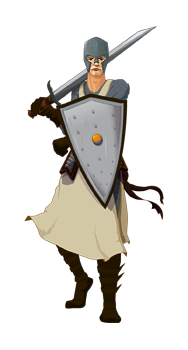 Wouldn’t you want to be a vassal to this Baron?

I’m currently a Baron, and serve as liege to seven or eight Knights and Ladies and a whole passel of Squires and Handmaidens. I’ve got to stay ahead of ‘em in rank, or they can win their freedom (and I’ll have no one to work in my castle buildings). It is a strange game, entirely virtual, played against strangers, yet (at least in ‘Peace Mode’) rather passive. 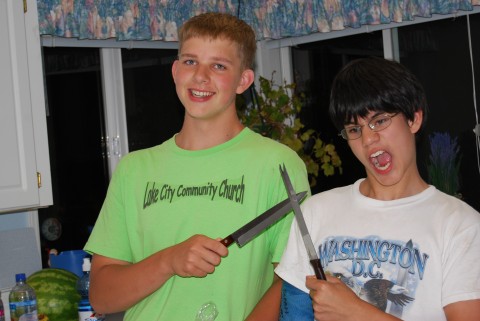 There’s nothing passive about these two potential vassals.

Days can go by with nothing really happening in your kingdom, if you’re in the middle of a large building or upgrading project. And yet the game has a certain charm. Many of us, who grew up reading stories of the middle ages, yearn for a time of Chivalry, Honor and Glory. Here in the game of Knighthood, I can arm my vassals with pikes and axes and make sure they all pray in church (to maximize their zeal). Once ready, I can raid the virtual castle of some poor, unsuspecting guy in Bangladesh, winning fame, gold, glory and (if I’m lucky) taking some captives. (Hmmm. Maybe I need to revisit that whole ‘Chivalry’ thing.) 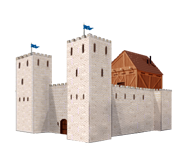 My castle still needs some work, even if (in honor of Mr. Darcy) I named it “Pemberly”.

I’ll keep you posted if I ever go to war … I know several of you are on the edges of your seats. Drop me a line if you want to become my vassal.