Fundamentally, it is all about tomatoes.

Some men have a mid-life crisis that involves a sports car, or a new job. For me, it was gardening, so we spent a good part of the Spring planting tomatoes. Then we had to transplant, stake and prune them, and we even managed to sell some of the plants.

We drew all kinds of deep, philosophical lessons from the planting, growing, staking and pruning, provoking one common reaction from our readers:

“For crying out loud, enough with the tomatoes, already!” 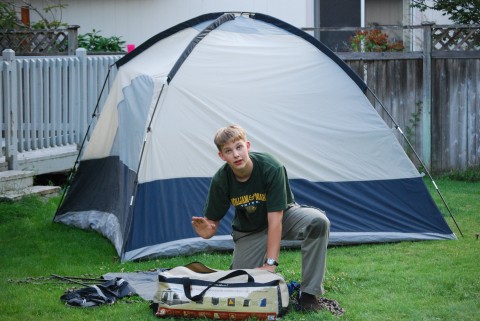 This boy was so sick of tomatoes, he’s packing to leave.

But at last we have arrived at the day we’ve all been waiting for: Harvest Time.

When I returned home this evening, Kathy asked me eagerly, “When are you going to eat one of your new, red tomatoes?”

I chortled with glee. “Maybe today … ” I hinted, waggling my eyebrows in a conspiratorial way.

Later, I went out to water and inspect my little darlings, and to photograph them appropriately. Looking closely, I noticed that there were only two crimson globes, where three had dangled yesterday. Frantically, I searched in the dirt at the foot of the plant — nothing! Could it be possible that someone had eaten one of my precious tomatoes? 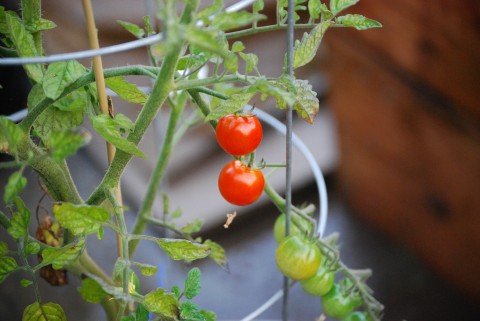 The first fruits of my harvest

I rounded up the usual suspects. “OK,” I snarled. “Who was throwing a frisbee near my tomato plants, and what did you do with the tomato you knocked off?” I marched up and down the line of ‘persons of interest’, noting their beady eyes and guilty faces.

But none of them cracked. “We don’t know what happened to your silly ‘ole tomato,” wailed my youngest daughter. 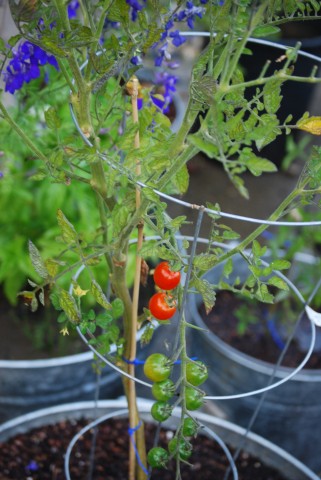 … and then there were two …

Finally, a confession was received from an unexpected source: “Um, I had one, sweetie,” admitted Kathy, scuffing the dirt with her toe. “It looked so good, and the snake said it would make me wise … ”

It is things like this that really put a marriage to the test.